Pushing our way toward car/human interplay.

Here’s a rarity for me: a short(-ish) post! About half the time, I aim for my posts to be brief (which for me is under 400 words), and they just balloon out of control. I can’t rein myself in. Obviously I have no one to blame but myself, but I’ll also recognize that the shorter the post, the more likely my commenting base is likely to call me out for pettiness in my analysis and criticisms. Like this one from several years ago. And considering how many of my subjects are already intrinsically tiny in scope, accusations of facile polemics are often fully justified—when the argument is brief. So, to avoid coming across as niggling or captious, I turn my topic inside out, and the text proliferates.

But here’s a signalization shortcoming in our nation’s capital that I can’t ignore. And I’ll try to keep it short. 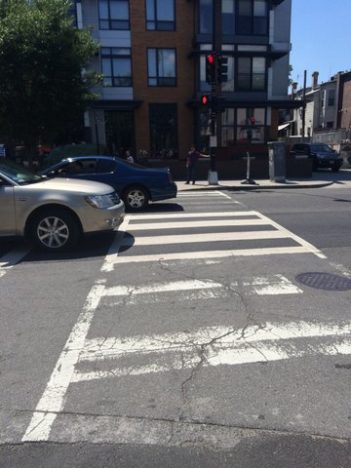 Looks like a fairly normal crosswalk, right? For all intents and purposes, it is. And it’s in a prominent point in a high-profile neighborhood: Columbia Heights—nearly smack in the geographic center of District. Like so many areas in this fast re-growing city, Columbia Heights has undergone extensive redevelopment, mostly of a flavor in which high-income professionals have supplanted working-class minorities. But the gentrification of Columbia Heights has hardly eclipsed its gritty past, and for the time being, at least, it thrives as a neighborhood of high-density, multi-racial, multi-income co-existence. Virtually all of the recent development has capitalized on proximity to the Columbia Heights metro stop, with loads of multi-family apartment and condo buildings springing up on land that previously hosted low-rise uses…or even mere parking lots. The new residential building in the background of this crosswalk is a perfect example.

So why do I single out this particular crossing? Pivot to the left and you’ll see why. 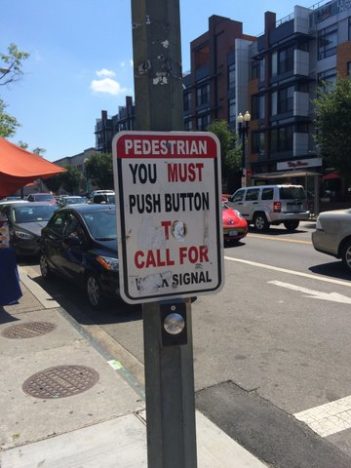 It’s a sign that specifically mandates that pedestrians hit a button to cross. At first blush, such a sign seems unremarkable, since virtually every city has its share of button-activated pedestrian signals. But, with few exceptions, the buttons expedite the “WALK” sign, ensuring that it occurs more quickly within a stop light’s cycle than it otherwise might. The presence of the button encourages the pedestrian to push it. But, as this sign indicates, pushing the button is compulsory to cross safely.

The most ardent pedestrian advocates tend to inveigh against all button-activated crossings, since they put an added burden on pedestrians who have long languished hierarchically at the bottom in urban environments. This dogmatic approach is, in my opinion, unnecessary: I’m willing again to recognize that, at a midblock crossing with light pedestrian presence, it may prove wise to have a user-activated signal, to keep a traffic light from stopping vehicles unnecessarily. But that is not the case here in Columbia Heights; the button-activated crossing is a conventional T-shaped intersection, so vehicles must already abide by a conventional traffic light. Here’s the view when pivoting the other direction. 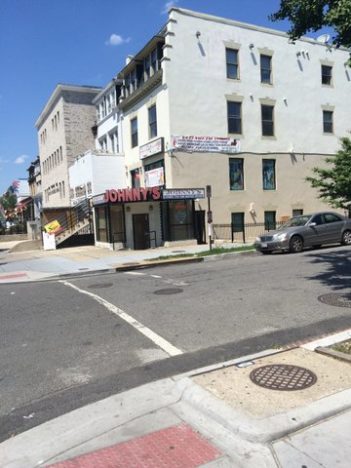 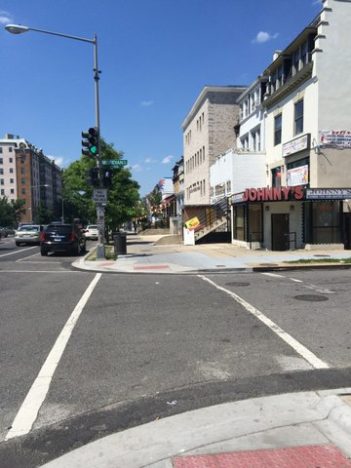 In a city with a robust transit system and a sizable contingent that does not own cars, it’s surprising to encounter such infrastructure. I’ve never seen it anywhere else. And I suspect that it’s a surviving vestige from an era when such an approach seemed acceptable, if not exemplary. The communicative language at pedestrian crossings has evolved considerably over the past twenty years: most electronic signals used to employ the written “WALK” and “DON’T WALK”—something we rarely encounter today. Nearly all major urban crossings today include handicapped accessible curb cuts, with Tactile Walking Surface Indicators, while quite a few offer audible indicators of a guided crossing through either chirps (the old-school method) or a spoken voice reciting the name of the intersecting streets (the new-fangled way). I suspect it’s a matter of time before Washington DC’s Department of Public Works removes this overtly pedestrian unfriendly crossing. And in the meantime, it’s there for me to carp…and still fail to do it in less than 500 words.

PrevFull skyscrapers, looming over empty streets.
The Great Recession and its undead discontents.Next

6 thoughts on “Pushing our way toward car/human interplay.”