Subsidization and its discontents.

My latest just recently went to post at Urban Indy. The subject, a parking garage in an Indianapolis neighborhood, might seem dry or parochial to those outside of that metro region, but it speaks powerfully about the potential pitfalls of poorly prepared public-private partnerships.  Here’s the garage: 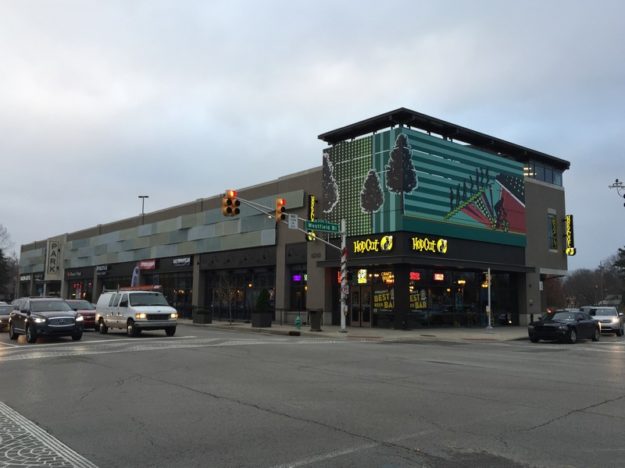 It sits at a prime corner in Broad Ripple, one of the city’s older, most established mixed-use, nightlife-oriented neighborhoods–a neighborhood that never declined, though close to those that did.  Plans for the garage started to take hold nearly a decade ago, and the facility opened to the public in spring of 2013.

The general perception in 2010 among select city leadership was that Broad Ripple was seriously losing ground, as other previously dormant neighborhoods closer to downtown Indy underwent considerable revitalization. The parking situation in this fiercely auto-dependent city meant that a historic streetcar suburb like Broad Ripple, primarily designed for pedestrians, became glutted with cars on weekends, spilling onto the sides of streets in residential neighborhoods just south of Broad Ripple Avenue. Since many of these weekend visitors were rowdy if not altogether inebriated, it fostered an uncomfortable relation between long-term Broad Ripple residents, who no doubt appreciated the area’s walkability but didn’t appreciate trash or puke in their front yards on Sunday mornings. The proposed parking garage on a long underutilized lot intended to deflect some of this demand for parking spaces by shifting it away from the local roads.

At first blush, it’s not a bad looking building.  The designers clearly put retail on the first floor, and they clad the upper levels with decorative features so it looks less like a garage.  But problems have been persistent: interior pooling of water after rainstorms, struggles to lease all the commercial space, less than 20% usage on weekend nights.  And, as I learned myself, those are only the flaws that have received press coverage.  Most tellingly, the city paid over one-third of the garage’s costs.  Paid–not loaned.  With that much taxpayer money invested, we’d all hope the outcome to a subsidization might be a little more salubrious.

I’d love to get thoughts on this article, and what it says about broader efforts to fill a sort of “demand gap” when the private sector’s market analysis can’t make the financials work.  Such an ill-conceived subsidization could serve as lesson for us all–not just the urban advocates.

PrevIs Danbury the next emerald city, or is it just the color of money?
Drive-by wifi?Next

31 thoughts on “Subsidization and its discontents.”