Depopulation as a means of preservation.

In the town of Buffalo, South Dakota (with 2010 population of 330), the main street, though austere, seems to have held together quite well. 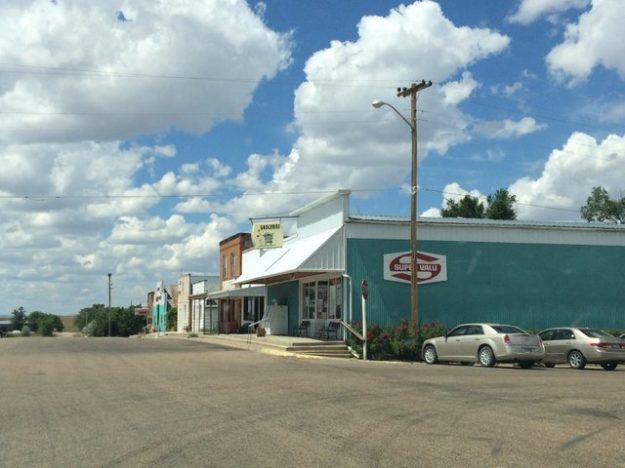 It’s not necessarily surging or growing in economic clout, but then, for the most part, neither is Buffalo, which has lost half of its population since 1960. However, compare that to many towns east of the Mississippi, many of which have suffered depopulation at 25% from their peak, yet their two-block main streets appear devastated—or at least struggling to rebound from a half century of neglect.

All things considered, Buffalo’s business district, centered at the intersection of Main Street and First Street SW (neither of which comprise the state or federal highway that pass through the town), is doing just fine. It features a hardware store, a lumber supplier, a bank, and, within a two-minute walk, a gas station and at least two eateries. 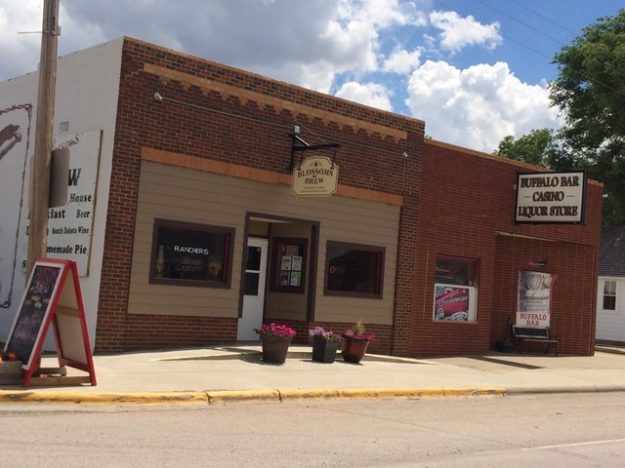 The devil-may-care attitude to regulations allow a combination of businesses that might seem unthinkable to folks in the Northeast, but here, it’s common to blend bars, package liquor and mini-casinos under one roof, evidenced in the photo above. (And, from what I can tell, Blossoms and Brew really does live up to its name, functioning primarily as a coffee shop with light eats, but also selling flowers and gift baskets—and the “brew” is just as much about beer as coffee.) In addition, while my pic is poor quality, you can just barely make out the obligatory post office to the right of the photo below. 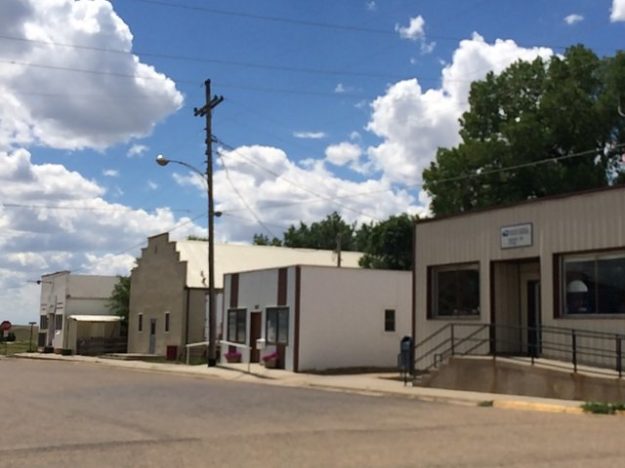 For a better view of this super-regional commercial hub, try Google Street View, which remarkably captured the entire town in the summer of 2013.

My use the term “super-regional commercial hub” may elucidate why Buffalo seems to have held together so well. The main street of two blocks serves an area bigger than the state of Delaware. Harding County, to which Buffalo is the seat of government, is half the size of Connecticut, yet it serves as the administrative limits for a mere 1,250 people. This northeastern corner of South Dakota is among the most rural and sparsely populated areas in the entire lower 48 states, with less than 1 person per square mile. Most of the region looks like this: 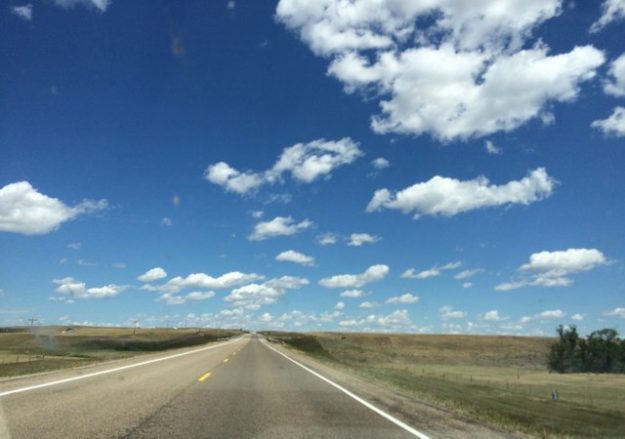 Cattle undoubtedly outnumber people; the overwhelming majority of the land consists of ranches, and many of those ranches themselves are larger than, say, the city of Newark.

In other words, Buffalo really is the only game in town. And “town” comprises a stretch of land so vast that it few people could easily take it all in simply through a brief empirical survey. The entire Harding County has only one other incorporated area: the Town of Camp Crook, 22 miles to the west, near the Montana state line. Camp Crook, whose population has fluctuated greatly since the Great Depression, currently claims about 65 people. And, in keeping with the trends across most of the rural Great Plains, Harding County has endured depopulation as well: down nearly 75% from its 4,200 a century ago. But—also in keeping with Great Plains customs—the rural character easily shrouds the exodus. Some of the loss occurs simply from the younger generation leaving town, while the empty-nest parents remain. And if a home goes abandoned, it most likely has no neighbors or even passers-by to gaze upon it regularly, summoning analogies to the old mantra “if a tree falls in a forest and there’s no one to hear it…”

In spite of the glacial retreat, Buffalo holds together because, even at densities of less than a person per square mile, the remaining population still expects the semblance of civilization. I’ll safely wager that few of the residents of Harding County are subsistence farmers, and some may still expect to travel great distances for occasional banking, postage, or entertainment. Yet the sparseness of the region precludes a basic small-town department store, or the predictable Walmart. Inevitably, at the peak of its expansion, Walmart conducted studies to determine the minimum density of income necessary to support one of the corporation’s smallest retail prototypes. Walmarts can flourish in towns of 7,000 people. Harding County—and much of northwestern South Dakota—lacks this density, so there remains nothing for hundreds of miles to compete with Buffalo’s main street. Therefore, Buffalo didn’t need any sort of Chamber of Commerce or Main Street Association to keep its commercial core tidy and well-tenanted. It simply has no reasonable competition.

The almost Darwinian demonstration of resiliency here, in a habitat without “predators”, manifests itself most effectively by the main street supermarket. 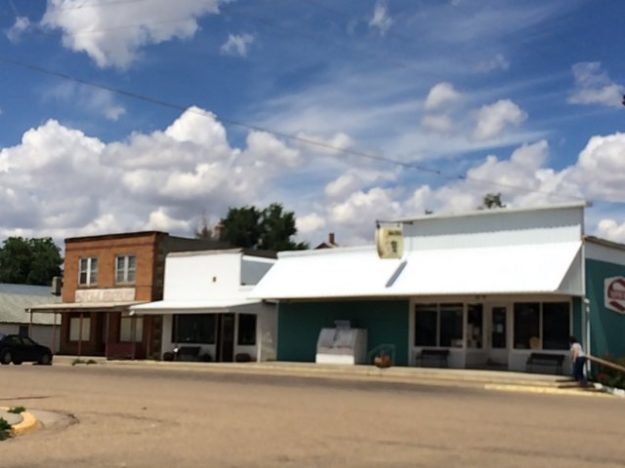 We witness not a single car parked in front on Main Street, despite the fact that nothing overtly restricts it. Here’s the clincher, in a far crisper photograph: 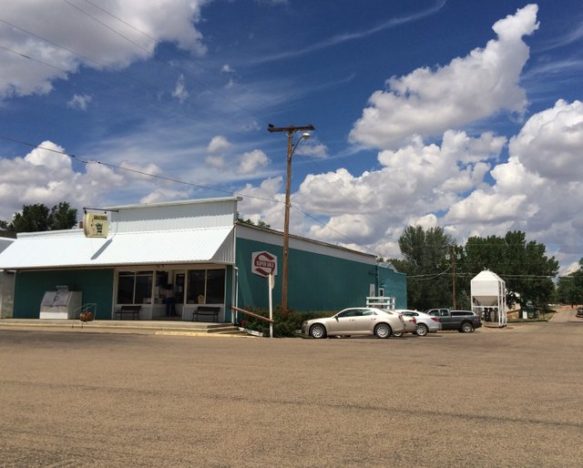 The supermarket simply claims enough “off-street” parking along the less congested side street—and of course I used the adjective “congested” with tongue firmly in cheek. I suspect that Super-Value offers about eight spaces. And eight is enough. If Walmart, or even a mere nationally recognized grocery chain (a la IGA or Albertson’s or even Piggly Wiggly) were a viable option in Buffalo, it could seize on the opportunity that a main street grocery store rarely succeeds because the off-street parking is inadequate. But Harding County’s sparse population puts it at a tipping point that renders it immune to the encroachment of suburbanization—a condition that heavily plagued other rural areas like much of Iowa and Missouri, east Texas, or most of Arkansas (the birthplace of Walmart). All of these vast regions, while often heavily rural, are still dense enough to reap the benefits and suffer the consequences of automobile and convenience-oriented development.

Despite having a car ownership rate for persons over 16 that most likely approaches 100% (and the legal driving age in the Dakotas is often much younger), Buffalo still largely maintains the veneer of a fully walkable, pre-car town, in terms of land development. Sure, it has a few parking lots—like the one at the bank–but it doesn’t depend on them. Certainly no drive-thru services. It doesn’t need them. Clearly if Buffalo continues its depopulation below a certain threshold, it will cease to support a grocery store, bank or post office, thereby turning it into a de facto ghost town, of which the American West has plenty. But it’s not there yet, and there’s not a trace of evidence that such a point is imminent. Without the regimenting, regularizing forces of urbanization, ultra-rural America can still largely flourish through an anything-goes approach to land use, and to life. It’s the same mentality that brings breakfast, beer and flowers together under one roof.

6 thoughts on “Depopulation as a means of preservation.”