Bridging the gap between state budgets.

The unincorporated community of Upper Black Eddy clutches the western bank of the Delaware River as though its existence depends upon the aquatic arterial. Because it does. 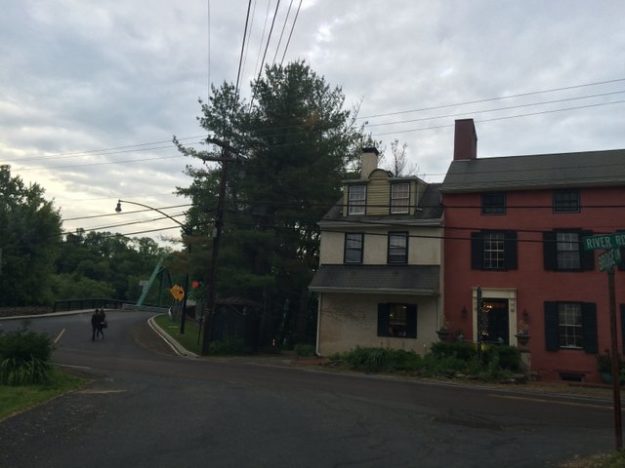 It’s so small, the Census doesn’t even track it. Despite the fact the hotel operated by the Black family first operated at least 150 years ago, the settlement never coalesced into anything big enough to warrant incorporation. Upper Black Eddy is a hamlet within Bridgeton Township, which emerged during the peak of canal trade, where its location between the Delaware Division of the Pennsylvania Canal and the Delaware River proved pivotal enough to elicit a handful of businesses. Among them is a post office: 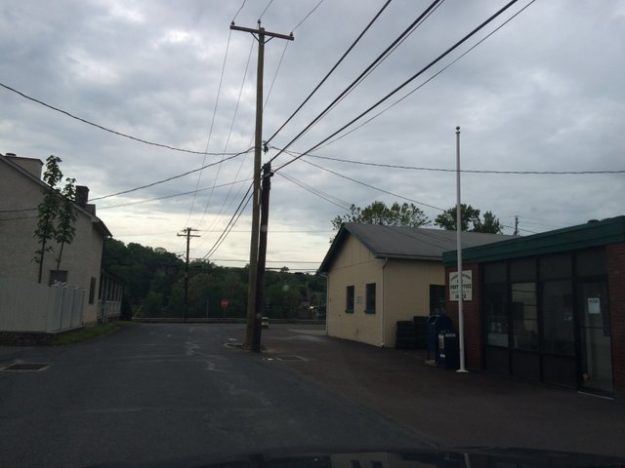 The community, not surprisingly, includes a cluster of handsome homes; most of the Delaware Valley north of Philadelphia is affluent. 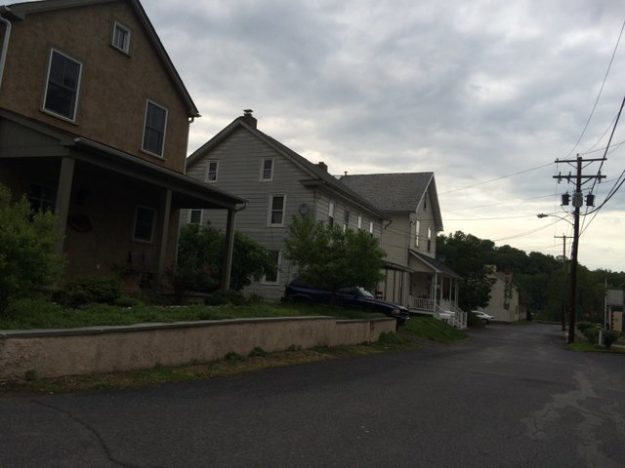 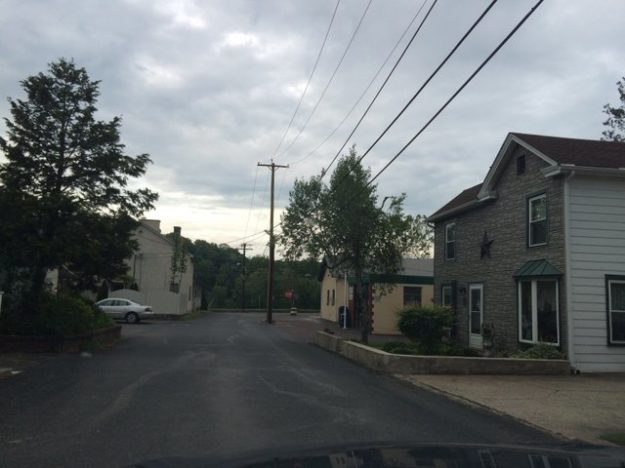 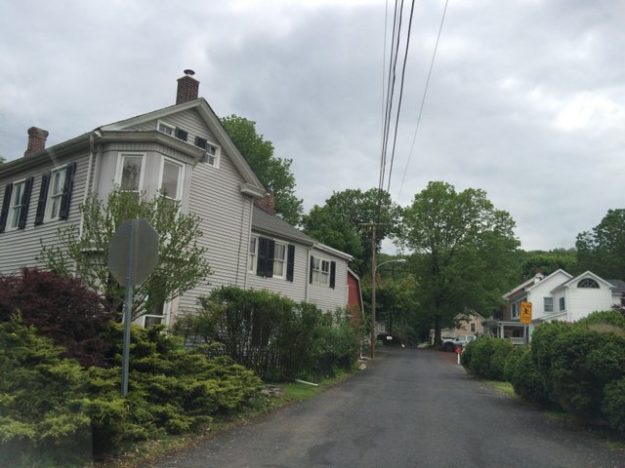 One of the businesses in Upper Black Eddy is peculiar, though not for what it sells. 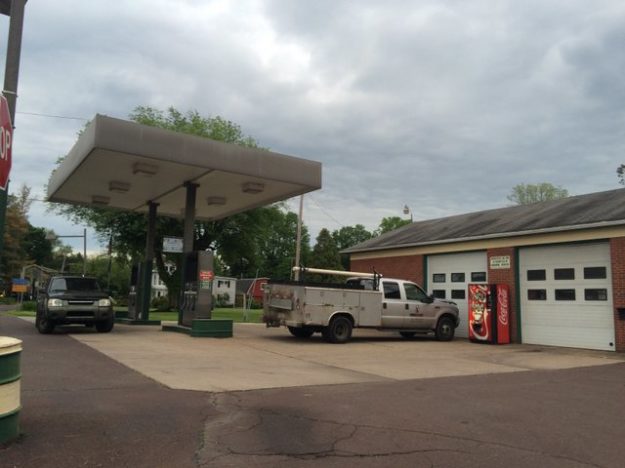 The Riverside Garage looks like a run-of-the-mill rural vehicular service and gas station, and its location on Pennsylvania State Route 32 virtually guarantees that it receives regular business, at least in proportion to much activity in this generally rural area. So what’s fishy about it? Zoom in a little closer. 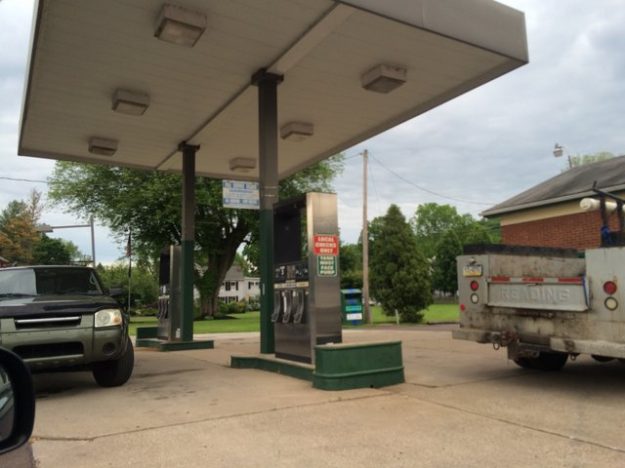 The gas tanks are missing their pumps. They’re non-functional. And while Riverside Garage was clearly closed on this rainy Sunday, it’s equally apparent that the business is still operative. So it still performs basic maintenance and state inspection services. But why no gas?

As is often the case, I can only speculate. But my guess is at least reasonably informed. Pivot 90 degrees and we can gaze upon the most likely answer. 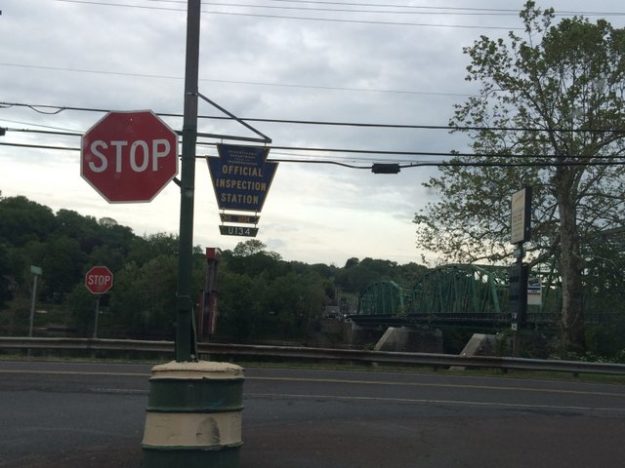 Not far at all is a prominent bridge over the Delaware River, which forms the state line between Pennsylvania and New Jersey. And immediately on the New Jersey side is the Borough of Milford. While hardly a megalopolis, Milford is significantly larger than Upper Black Eddy. 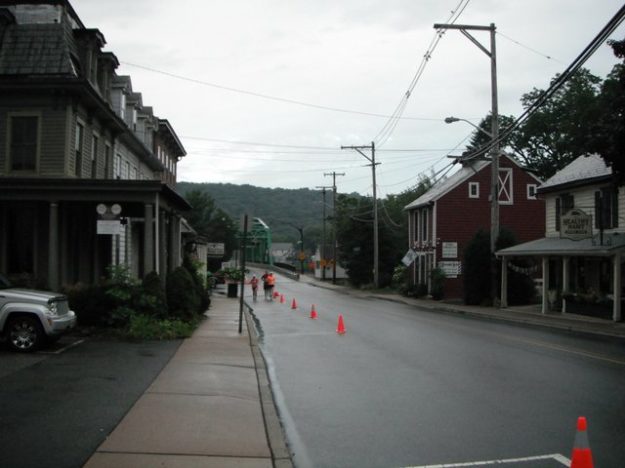 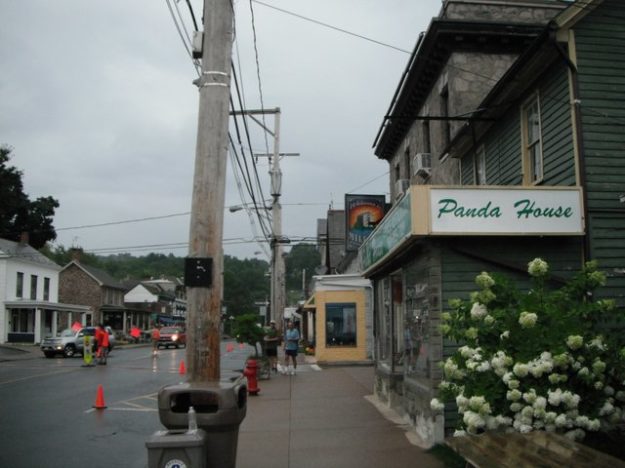 It also includes a clearly identifiable main street, and at least a few gas/service stations of its own.

And there’s the clincher. I’ve mused on the New Jersey/Pennsylvania border multiple times in the past, usually from the perspective of the advantages conferred to Pennsylvania by virtue of its significantly lower cigarette taxes. The average smoker can deduce that PA has significantly lower taxes than NJ without doing any research. How? Just look at the businesses on the Pennsylvania side: a disproportionate number of them are smoke shops. In the Borough of Morrisville (pop. 8,800) the commercial district seems to be about 50% cigarettes (and, in this day and age, no doubt vape and e-cigs).

The service station in Upper Black Eddy demonstrates the flip side of the coin: historically, New Jersey has claimed the cheapest gas in the northeastern US for at least a few decades. Gas has averaged about thirty cents per gallon less than Pennsylvania. Thus, it’s hardly brain surgery: anyone within five miles of the Delaware River would steal across a bridge to the Keystone State for cheap smokes, for the same reason they’d cross into the Garden State to fill up their fuel tank. The tax structure between the two states makes it nigh impossible for a business on the disfavored side of the river to operate, so the Riverside Garage pulled out its gas pumps. If one were to quantify, I suspect New Jersey towns along the Delaware River reveal a disproportionate number of gas stations, possibly to the point that municipal zoning regulations seek to keep them in check. Furthermore, these jurisdictional differences in taxation always raise concerns for legislators in the high-tax state, if it can enjoy a net gain in tax revenue through the heftier imposition. Or do all the people that eschew the hefty taxes induce a deadweight loss, nullifying any benefit in higher state revenues through increased taxation?

It’s a bit of a surprise to discover that Riverside Garage only recently removed the pumps; in the summer of 2015, they still seemed functional. Obviously the owners could have had other reasons. It’s equally possible that it was a temporary condition. My Upper Black Eddy pics come from summer of 2016. And last October, New Jersey governor Chris Christie signed a bill raising his state’s gas tax by 23 cents, placing it nearly at parity with Pennsylvania. Without the cost savings the locals used to enjoy by crossing the river, Upper Black Eddy may find a new reason for being.

PrevMartin Guitar shows its pluck.
Is Danbury the next emerald city, or is it just the color of money?Next

5 thoughts on “Bridging the gap between state budgets.”