The average Midwesterner will probably recognize the icon visible through this smudgy windshield. But he or she might not be so familiar with the aesthetic. 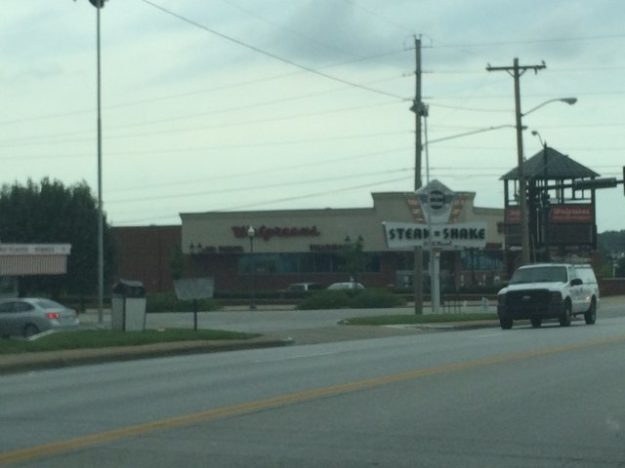 As the white-and-black sign indicates, it’s a Steak ‘n Shake—a leading candidate for the most Midwestern restaurant out there…right up there along with Bob Evans. The chain, which survived numerous ups and downs over its multiple decades in operation, has more recently expanded considerably beyond its roots in the lower Midwest. But it took such a long time doing so that it remains invariably tied to the region, much more than other born-in-the-Heartland chains like Wendy’s or Arby’s. It made national news when executives opened its first location in Times Square. No doubt, during those first few weeks, scores of Midwestern expatriates helped build the lines that snaked around the corner.

Stake ‘n Shake has achieved an almost cult-like passion among just about anyone who grew up within 200 miles of the Ohio River, and only marginally because of the food, for which I’ll withhold judgment because, frankly, that’s not what this blog is about. (Nor is the cult really about the food, because there are many out there who dislike the product, yet still have fond memories of the restaurant itself.) The chain’s real triumph is its strategic relation to its competitors, asserting its brand through numerous minor distinctions. And those distinctions have ensured its longevity—one that outstrips McDonald’s by fifteen years. It offers table service, unlike Mickey Dees. It uses glass plates and utensils. Most locations remain open 24/7. A bottle of distinctive pepper sauce (hot chilis in vinegar) sits at every table. It also delivers a signature bowl of the other kind of chili—a food particularly near and dear to the hearts of Lower Midwesterners (with spaghetti in it…of course!). It might also owe its success to its witty, low-key, terse commercials (“hissssssss….”). Or, through its shrewd advertising: the “steakburger” that it promulgated.

Regardless of which hook worked for you, Steak ‘n Shake has proved itself a resilient brand even as it has grown well beyond its parochialism, its inverted elitism. So why is the sign in the photo above such an oddity? Sure, it retains the unmistakable monochrome that outlines the Steak ‘n Shake seal—a color (or non-color) scheme that extends throughout the tiles of the restaurant’s interior.   But, beyond that, the large black lettering on the bowtie-shaped field doesn’t align with the typical logo for the restaurant. Even the average residents from my hometown of Indianapolis—the headquarters for Steak ‘n Shake since 1971, and a city where the restaurant is not surprisingly ubiquitous—are probably scratching their heads. What’s going on here? 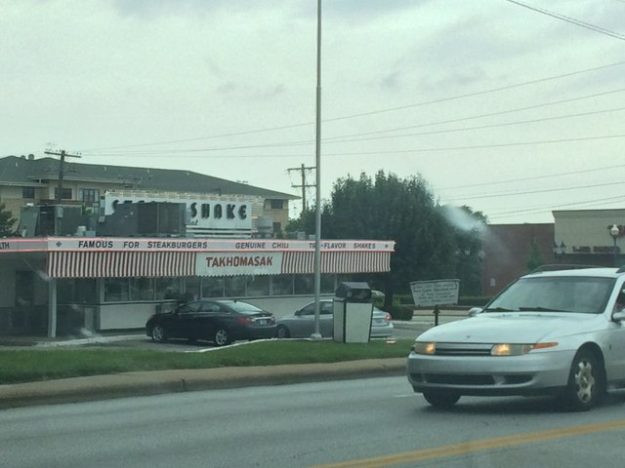 The physical structure that houses the restaurant makes it clear: this is a Steak ‘n Shake from waaaaay back when. To be more precise, it’s a 55-year-old location that never remodeled.

In some respects, it’s a testament to the fact that remaining ahead of the curve—chasing a trend, keeping up with the Joneses—doesn’t always yield amazing returns.   After all, the entity chasing the trend might take the wrong path, right into a brick wall—SLAM. Meanwhile, falling to follow trends can cause a person or institution’s brand to collapse under its own lumbering weight: witness what happened recently to another Indianapolis-based company, H.H. Gregg, an electronics retailer that very recently folded after 60 years in operation. As Gregg’s grew, it lost touch with its previously well-regarded, knowledgeable customer service and rapidly degraded to an impersonal, faded relic—an oversized Radio Shack.

But, then there’s this particular Steak ‘n Shake. As is the case with nearly every fashion, those that achieve an apex in popularity will eventually plunge to their nadir…then, after another decade-long reassessment, they’ll typically earn a second life, often tempered by both sympathy and irony—two sentiments that rarely co-exist in any other context. This Steak n’ Shake, just a mile east of downtown Springfield, Missouri, seems to have achieved this aesthetic revival. The refusal to keep with the times has made it cool once again. Since my photos aren’t that great, try this Google Street View to get a clearer sense of how it fits within a conventional context. There’s even a Walgreens right across the street. But this restaurant doesn’t suffer from its lack of upgrades. The paint is fresh. Everything is up to code. The awning even references “Takhomasak”—another invented catchphrase that Baby Boomers should fondly remember. Instead, its vintage appearance makes it a novelty amidst the banal surroundings.

No doubt, popular taste has completed its orbit around this particular aesthetic gesture. But that’s only half of the package deal—the subtle half. Like many other survivors from bygone eras, this Springfield Steak ‘n Shake has transformed renewed public appreciation for its vintage look into some real financial clout. In 2012, when the location reached its golden anniversary, the owners petitioned the Missouri Advisory Council on Historic Preservation to get the property listed on the National Register of Historic Places. And by August of that year, they succeeded. Lucky for them, the site had already attracted numerous out-of-town visitors, and not just for its well-preserved look. It sits at the corner of South National Avenue and East St. Louis Street, the latter of which was the primary path of Historic Route 66 as it made its way through Springfield. Therefore the path itself is a time warp, and every summer, according to the owners, this Steak ‘n Shake welcomes scores of road-tripping visitors, both domestic and foreign. And what better place for a lunch break of a steakburger and fries, followed by a quick trip to the historic Route 66 Springfield Visitor Center, just a few blocks closer into town? By this point, it’s possible that even if the foreign tourists recognize the name Steak ‘n Shake (they have locations it Kuwait and Portugal by now), they still have never visited an authentic location along the original cross-country highway. The experience is about more than just shoving food into our gaping maws. It’s a pilgrimage.

Route 66—that legendary path from Chicago to Los Angeles—suffers heavily these days. After decades of upgrades to limit access thoroughfares through the interstate highway system, its own preservation across two thousand miles is patchy at best. But it still offers plenty of treats along the way, and those visual relics make up the real essence of The Mother Road, far more than a two-lane band of pavement. (I wrote about another in southeastern Kansas several years ago—an entire town devoted to Route 66 tourism.) We Midwesterners can hope that the 84-year-old Steak ‘n Shake chain keeps adapting to shifting cultural preferences, so that it remains relevant in an era when In-N-Out and Five Guys may prove far more aggressive competition than McDonald’s. As long as the management at Steak ‘n Shake keeps tweaking that part of our brain that craves nostalgia, they should remain well in the black. And, even if they fail internationally, we can hope to hold on to that federally preserved little corner in Springfield.

PrevHave fun. Violators will be prosecuted.
A business grows organically—the building is just its chrysalis.Next