In retail, appearances aren’t everything. They’re the only thing.

I’ve pontificated upon main street retail numerous times on this blog, yet I still haven’t come close to running out of good material. The subject (and retail in general) is deeply sensitive to individual circumstances, and the ingredients of a healthy, vibrant, low-vacancy main street often evolves steadily, right along with our shifting consumer preferences.

One thing that remains constant amidst all the change is a generalized attitude: the content, quality and occupancy level of retail overwhelmingly influences our perceptions of a district. We often judge whether or not a town is “nice” by the character of its main street—which is one of the main reasons the auto-oriented suburbs of the 1960s and 70s have been working overtime to help endow themselves with “downtowns” where, in many cases, none previously existed.

But even the most devastated, depopulated, de-industrialized of old city centers have, in recent years, devoted considerable effort in deactivating the decline. If a struggling downtown can claim even a microdistrict with some real street life—central Toledo around its ballpark, for example—the civic leadership of that city can steer public perception remarkably in favor of downtown…even if tumbleweeds still drift across a good 80% of the city center.

During my two-and-a-half years living in the Lehigh Valley of Pennsylvania, the central city of Allentown achieved exactly this result. When I arrived in 2014, I was hard-pressed to find more than two restaurants that stayed open after 6pm. In the ensuing years, the downtown witnessed the completion of a hockey arena, two first-class office buildings, over 250 units of apartments, the revival of an old top-end bank into special event space, a Renaissance Hotel with convention hosting capacity, and a smattering of new restaurants—enough to constitute a minor “scene”. 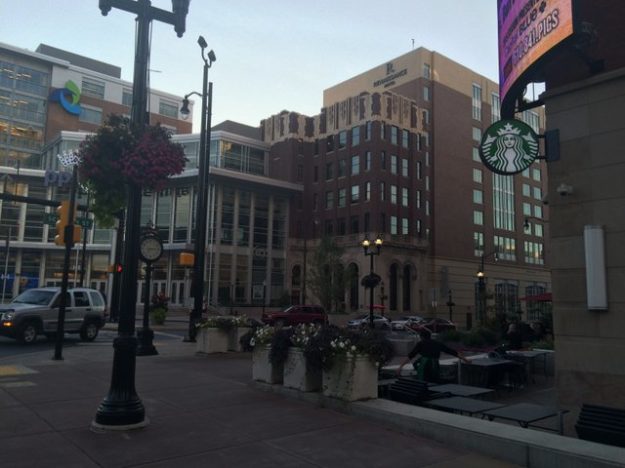 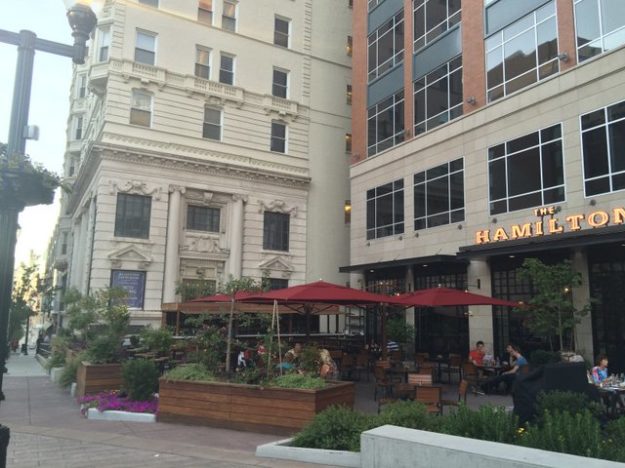 Such intensive investment has resulted, not surprisingly, in a bifurcated downtown: one in which a few blocks reveal all the trappings of urban revitalization, even though this investment has yet to “spill over” into the remainder of the district, which still suffers the reputation of concentrated poverty, abandonment and crime. But the primary investors in downtown Allentown—much of it a single visionary developer—is that Keynesian economics will bear fruit over time. Hope springs eternal.

Most evidence would suggest that the strategy is working, as more businesses seek to locate in downtown Allentown, no doubt abetted by state-sponsored tax incentives, of which Pennsylvania’s third-largest city is—per the statutory definitions—the only municipal benefactor. (Plenty other Lehigh Valley bloggers are far better versed in how the Neighborhood Improvement Zone—the NIZ—came to be, and I’ll defer to the City of Allentown’s definition of this unique, spatially defined tax credit to avoid embarrassing myself.) At any rate, most of the investment arrives through two stylized development packages: urban infill (placing multi-story, mixed-use structures on former parking lots) or slightly more controversial redevelopment (in which the developers demolish clusters of century-old, largely vacant small commercial buildings to make way for a single mixed-use structures with large floor plates). The strategy is hardly earth-shattering, and even the more controversial approach—the one that involves demolition—hasn’t ruffled too many feathers, largely because the old buildings were dilapidated to varying degrees, and Allentown’s center city remained so starved of any real investment.

The one distinctive byproduct of this intensive growth over the last three years is the multi-block ArtsWalk, a three-block pedestrian corridor that has emerged to help activate the interstices between the newly constructed buildings, connecting three major anchors: the PPL Center (the venue for the Lehigh Valley Phantoms hockey team), Miller Symphony Hall (home of the Allentown Symphony Orchestra), and the Allentown Art Museum. 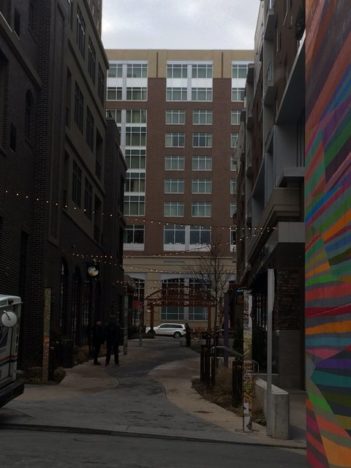 Essentially, the ArtsWalk has claimed Court Street, a former public right-of-way, transforming it to a largely pedestrian corridor.

It’s a risky venture for a variety of reasons. 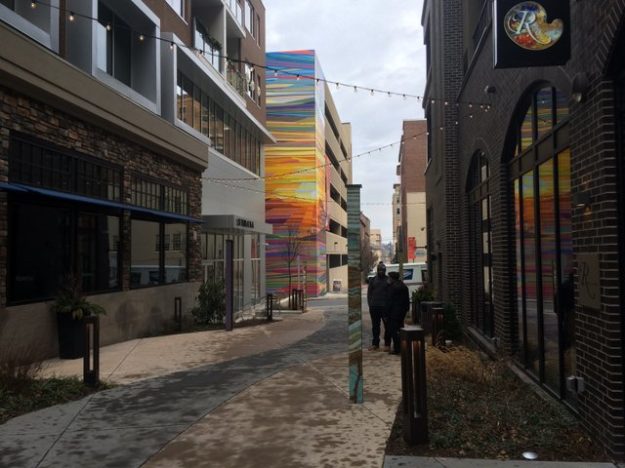 Number one: the U.S. lacks any real legacy of successful pedestrian zones in downtowns. For every Burlington and Madison, we can find ten (or twenty) scarred main streets, where 1970s/80s attempts to pedestrianize downtowns failed abysmally. (Allentown is among these casualties: a few blocks of the city’s Hamilton Avenue struggled for decades as a pedestrian-only corridor, complete with awnings over the sidewalks, before city leadership capitulated and returned the failed main street into a one-way arterial for cars.) The history of pedestrian planning in American and Allentown is deeply fraught.

Number two: the three anchors that serve as bookends—and a fulcrum—are hardly community mainstays. Sure, the arena can pack in the crowds for a hockey game, but it usually opens at night, while conventional retail’s dominant hours are the daytime. And hockey is seasonal. A symphony hall brings far fewer people, far less often, and an art museum can go years without a milestone exhibit. None of these institutions have the capacity to attract customers the way a department store would, and Allentown no longer has any downtown department stores. (Besides, department stores in general lack the cachet they claimed as recently as 2005, manifest by the widespread closures of Macy’s and Penney’s.)

Number three: while the ArtsWalk itself is immaculate, as are all the buildings that flank it, the whole concept still sits just two blocks from desperately poor residential quarters. (And one of those buildings that abuts the ArtsWalk houses low-income seniors.) The fact remains that the total income density around the new linear plaza remains generally low for the region, despite the presence of a few new expensive apartments and office buildings. And while hockey games or music concerts definitely bring people with spending power into downtown Allentown, most people don’t want to buy expensive clothes before a watching the big game.

As a result, the ArtsWalk has endured a mixed success in its less than three years of life. Few of the businesses that first opened remain. Among the highest profile was Shula’s Steakhouse, the national chain lured to a space along the ArtsWalk from its former location at the Promenade Shops at Saucon Valley, at least in part through the generous tax breaks induced by the NIZ, which closed after just six months in operation.  The problem? Most local media sources speculated that Allentown failed to attract enough big spenders from the suburbs to patronize the establishment. Less than a year later, the owner/operator of women’s clothing boutiques Sage and Aquarius, attracted to the ArtsWalk from Promenade Shops through similar enticements, announced he would close his two stores as well.He had already shuttered a shoe store months earlier. 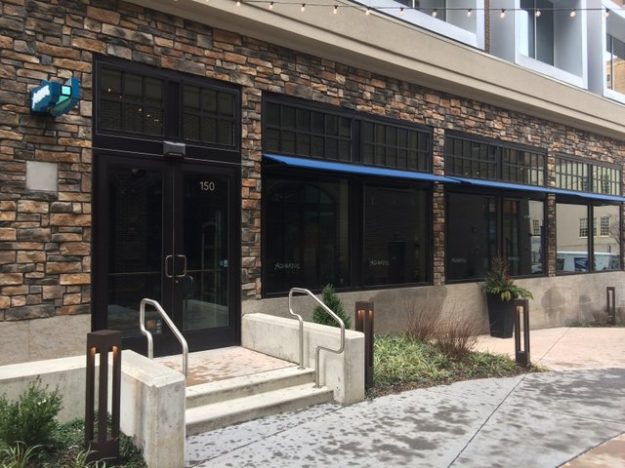 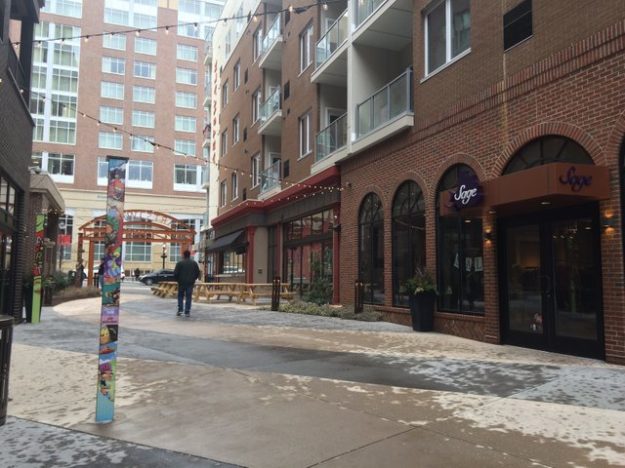 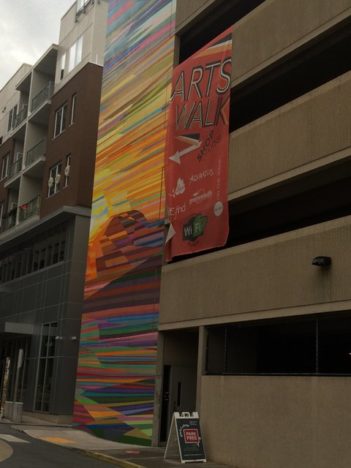 Most of the vacant space has quickly found new tenants. A more moderately priced barbecue restaurant replaced Shula’s, and it seems to be packing in the crowds. Virtually all other spaces have secured other tenants within three to four months. But let’s look more closely about what claims an address along this pedestrian-only corridor. 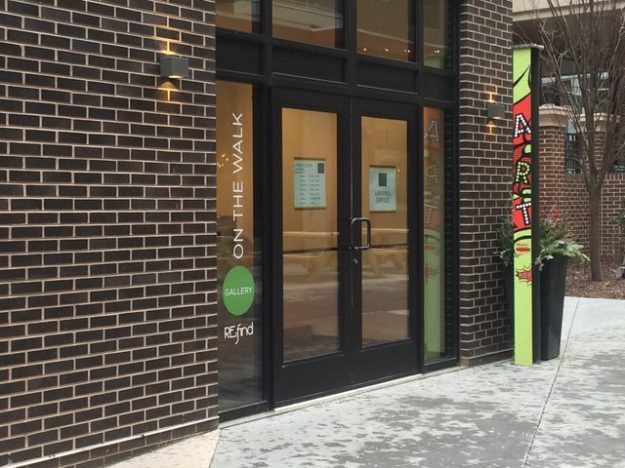 The former site of Popmart, a specialty arts and craft gallery based in nearby Bethlehem, now hosts a leasing office for the apartments that flank the ArtsWalk. While such an entity is essential for the health of the immediate area—it needs warm bodies in all those residential units on the upper floors—the site previously went to a distinct tenant. Additionally, the fact that a leasing office occupies such a high-profile space suggests that the apartments themselves are far from achieving full occupancy. And notice the decals on the window immediately to the left of the door. 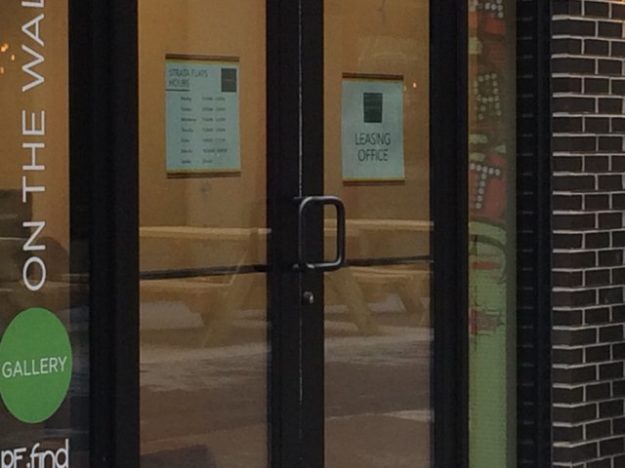 They refer to RE:find, an Easton-based home furnishing boutique that opened shortly after Popmart closed.  But, as of early spring 2017, the Allentown location of RE:find had closed as well.

Even more telling is the immediately adjacent storefront along the ArtsWalk. 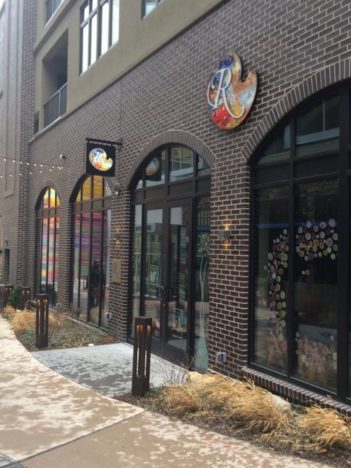 It hosts Roey’s Paintbox, a group painting studio. This sounds like a perfectly valuable tenant, and collective painting classes have turned into a quiet fad nationwide. And such a business helps reinforce the “arts walk” concept. But check the hours listed on the door: 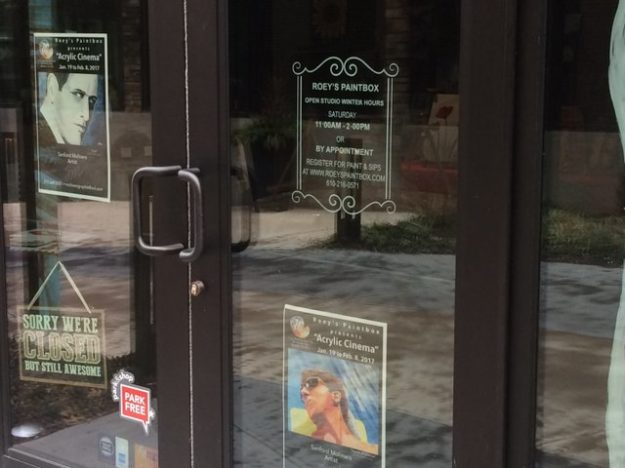 Only three hours a week, unless by appointment. Under what conditions could a business stay profitable while operating such a short time? The lease would have to cost the little company next to nothing.

I remain sanguine that the ArtsWalk will ultimately catalyze downtown Allentown’s ongoing regeneration. At any rate, the organizing and managing powers to be have kept it looking good and well-tenanted, even when the reality has proven iffy. But the current conditions shine light on a fourth challenge not yet mentioned in this article, though I’ve discussed it ad nauseam elsewhere in this blog. How much longer can bricks-and-mortar retail remain viable anywhere? If anything, the ArtsWalk will need to attract restaurants, salons, and other small businesses that feature a distinctive service, rather than simply selling goods. The density will need to increase, both in businesses and residences, and these newcomers will need to prove they’ve got disposable income. And, most importantly, as development continues to the east, thereby extending the length of the ArtsWalk concept, the powers that be will need to show similar perseverance in maintaining appearances. They’ve done a bang-up job so far, and, while you’re in the most successful block-long portion, you almost feel as if you’re in a fully thriving suburban lifestyle center. But since even lifestyle centers have recently failed to thrive the paradigm for urban storefronts may need to change again soon. As is the case with downtown revitalization efforts in general, we can only hold out hope that what we’ve witnessed in Allentown since 2014 remains more than a short-lived fad.

PrevChatham Park: a great new development under threat by its own neighbors.
Depopulation as a means of preservation.Next

8 thoughts on “In retail, appearances aren’t everything. They’re the only thing.”