A business grows organically—the building is just its chrysalis.

It’s not easy to predict what, on any given day, might avert the eyes of a photo-driven blogger like me. Since empiricism generates most of my blog articles, usually it really does come down to what stimulates my own two peepers. Then I take a picture of it, often hastily. (Which is why I call this a “photo-driven blog” and not a “photography blog”.) This time, though, it’s less about averting the eyes and more about that other phrase in the first sentence: “on any given day”.

It’s all about the timing.

And, on a given day in 2015, almost two years ago exactly, I stumbled upon the following façade in downtown Durham: 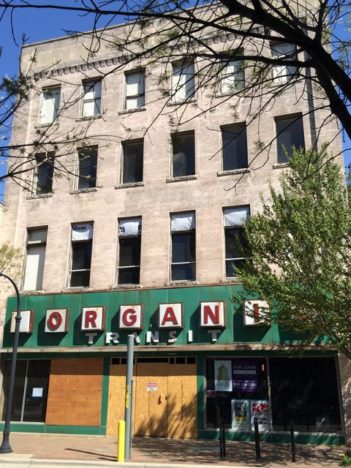 It’s hardly an architectural wonder. And, while the building appears in generally good condition, it’s obvious it’s not turning the heads of too many prospective buyers or tenants. But then there’s that sign. The square letters appear nearly as rusted over as the green baseboard material that they’re mounted upon, but that’s not all.

What is Organic Transit, and what would it mean? Based on the age of the lettering, how long ago did this business operate? Perhaps strangest of all: why did the businesses include an extra, unnecessary letter block at the beginning, to the far left? 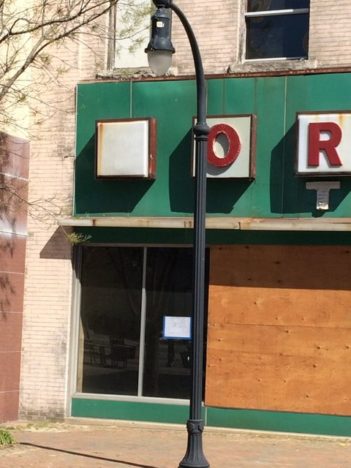 When I first saw this façade, baking under the sweaty North Carolina sunshine, I had particular trouble reconciling the obvious age of the sign with the diction itself. Organic? Really? Did that word even exist in 1967, or whenever it was that those square letter-blocks first appeared above the storefront? It certainly wasn’t part of everyday speech like it is today. Now it’s a huge portion of the produce department at every reasonably sized grocery store in America (and, no doubt, one that operates at a particularly high profit margin). But “organic” was no buzzword forty years ago; it might not have been one even twenty years ago. For that matter, at the time these letter blocks first appeared on this wall, I’d suspect “transit” wasn’t an appealing word either. Bear in mind, transit in general lacked any cachet in the car-crazed middle of the previous century. Those two words just wouldn’t have sold themselves very well. No wonder the business failed.

Or did it? And who’s to say it was the first business at this location to appropriate those ponderous white squares? After all, it’s hard to ignore that blank one on the far left. Most likely some other business first invested in those blocks; one that used all eight of them. Against better judgment, I figured it wouldn’t hurt to investigate this unusual amalgam of cultivated patina with contempo parlance.

As is often the case, the wonderful time-slide of Google Street View bears copious fruit. And it confirms that I caught Organic Transit during its relatively short tenure at this location. Here’s the property in August of that same year, indicating that someone else had purchased the building and invested significant money in overhauling its façade, no doubt capitalizing on the revitalization efforts underway throughout downtown Durham. And, just a few years earlier (June 2012), the building housed another tenant, at least according to the sign: Bargain Furniture. But, since “bargain” also contains only seven letters, it, too, was almost definitely a second-hand user of those rusted white squares.

Incidentally, a bit further research not only indicates that the company hasn’t folded; it’s doing just fine, having sought digs elsewhere, on the outskirts of downtown Durham. The website effectively conveys what the owners refer to as “organic transit”: the creative vehicle, called an ELF, is an elaborate recumbent tricycle that seats more than two, in which the sheltering apparatus harvests photovoltaic cells that electrically charge a motor, allowing the user to ditch the pedals during steep hills, or whenever he/she feels like relaxing. While it falls under the same legal recognition as a bicycle, it has a fully functional motor intended to convey the riders so they can elect to do as much or little work as necessary. And the solar power results in zero emissions.

Organic Transit is a homegrown operation from the ultra-productive North Carolina Research Triangle, one of the fastest-growing metro areas in the country for the last quarter century. But, among the three largest cities (Raleigh and Chapel Hill are the other two points in the triangle), Durham historically has enjoyed far less economic prosperity. During my 2015 visit, only a few storefronts showed much sign of life, and obviously Organic Transit was not among them. But a digital stroll through downtown Durham reveals substantive changes in just the last two years; by this time last year, the formerly derelict façade had morphed into a fully refurbished four-story building.  And it sits down the street from another mid-century façade whose gorgeous, space-race (and vaguely Soviet) stylings suggest that its owners think it’s a keeper. 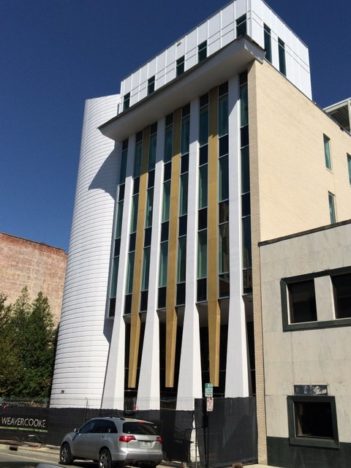 But I digress: building bling gets the best of me again.

Organic Transit, the whimsically named business that formerly embraced the retro aesthetics of a stagnant downtown, offers a microcosm for entrepreneurship as the engine for economic development. Who knows what those eight white squares said when the business first opened, but, until a few years ago, the building’s viability had deteriorated to the point that it housed Bargain Furniture. Not surprisingly, cheap furniture stores seek the most economical real estate: they need lots of floor space to hold their low-cost beds, sofas and recliners. But even Bargain Furniture was long gone when Organic Transit took over; notice that the 2012 Google Street View still features the company’s signature ELF in the window. At that point, the business owners apparently hadn’t yet changed out those signs. And they never really did: instead, they chose the economical solution of re-appropriating the façade, capitalizing on its retro-chic novelty as an ironically eye-catching platform for their unique product.

Organic Transit found newer (and apparently bigger and more lucrative) digs within a couple years. But, for that brief period from 2012 to 2015 (give or take), this façade offered the unlikely fusion of old-school lettering and a newfangled verbiage that owes a great deal to venture capital and risk-taking. Maybe the owners ultimately decided that the old-school signage didn’t work…that people just saw it as a faded old storefront.  But they took their chances, that’s for sure.  And what better incubator for a risky, innovative business than a hunk of cheap real estate in a struggling downtown? Durham’s fortunes have improved enough in the last 24 months that the next patent out of UNC or Duke might have to look elsewhere than downtown, populated increasingly with restaurants and microbreweries. Fortunately, there’s nearly always an economically depressed old neighborhood down the street—in a vacant building next to a business called Organic Transit.

PrevSteak ‘n Shake: nostalgia comes around full circle.
Chatham Park: a great new development under threat by its own neighbors.Next