A power center turns over a new leaf, only to find more grubs.

About a year ago I explored one of the few retail typologies that seems to be growing in prevalence during this turbulent era: the power center. It’s essentially the only physical construction that suburban retail developers are building these days. And they usually look like little more than a strip mall on steroids—which, apparently, is what many consumers want.

How’d we get to this point? The classic, automobile-oriented, open-air shopping center would harbor one or two large anchor stores (a department store or some other big box) along with five to fifteen smaller in-line shops, all lined in a row or an L shape. Conversely, the standard power center offers at least six huge anchor tenants—sometimes twice as much, or even three times as many—along with at least 20 in-line stores, usually configured in a U-shape, a quadrilateral, or a series of contiguous rectangular fortifications. And in the middle of it all is an enormous parking lot.

Power centers are replacing malls as the suburban shopping archetype. Literally. When many malls die (and, these days, malls are dying every few weeks), if they cannot find an investor to repurpose the existing structure, chances are strong they’ll get demolished and transformed into some variant on the power center, often featuring a Walmart, Target or a another national discount big box. As I’ve noted multiple times on this blog, the U.S. has not witnessed the construction of a new mall since 2006.

A decade ago, many retail experts wagered that the new standard for retail was the lifestyle center: essentially an open-air version of the conventional mall (which is how most of the earliest malls began) but with greater attention to aesthetics, landscaping, and pedestrian amenities. But, as I noted through the mediocre performance of the Promenade Shops at Saucon Valley a few weeks ago, lifestyle centers are starting to demonstrate the same struggles we’ve seen with malls for much of the 21st century. And let’s not even get started with the conventional strip malls of yesteryear: many of these are languishing at 80% vacancy, while hundreds have faced demolition.

As far as conventional suburban shopping goes, this generally leaves the power center as the reliable alternative. And what a shame. Whether in Michigan, Pennsylvania, or West Virginia, these leviathans pale in comparison to the charm and aesthetics of malls or lifestyle centers. (And that’s assuming we can concur that malls are charming or aesthetic. Plenty of folks would beg to differ.) But power centers? I know I’m not being the least bit objective here, but I can’t imagine anyone would ever say they’re pretty. Or even just okay-looking. Parking really is the centerpiece, and parking at best is neutral: sometimes it has nice landscaping, tree islands, maybe even a fountain or sculpture. And every now and then the developer will instill the façade with some rudimentary visual interest. But it’s still a parking lot first and foremost. Ugly. Boring. Utility is much more important than attractiveness.

So I recently revisited the power center known as The Highlands, just outside of Wheeling, West Virginia. I first covered this retail complex in a blog article last year (linked twice already). It’s perched on a hill just north off the busy I-70 corridor that leads to the suburbs of Pittsburgh. The Highlands doesn’t seem any better or worse than your average power center: 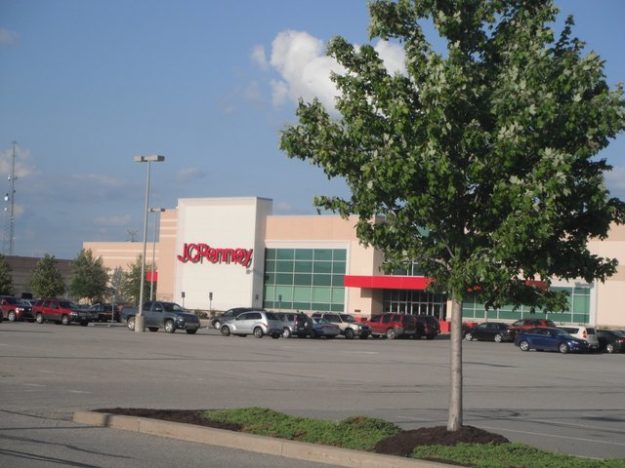 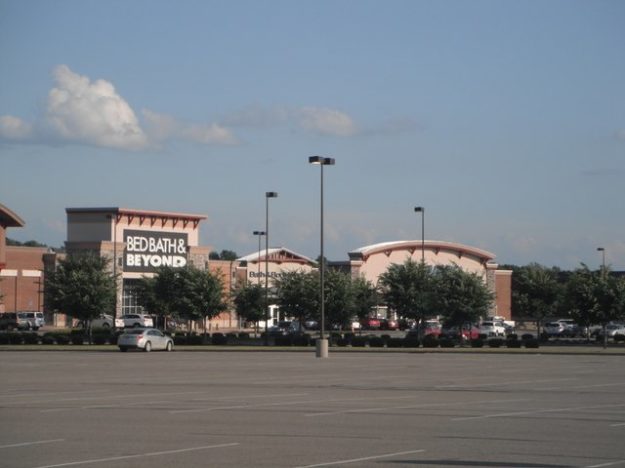 Notice those vast parking lots. Typical of a power center, they’re the biggest (only?) selling point.

What did surprise me is that The Highlands is still expanding. At my last visit at the beginning of this year, I discovered a whole new section. Perhaps most interestingly, it adopts a completely different aesthetic. Here it is: 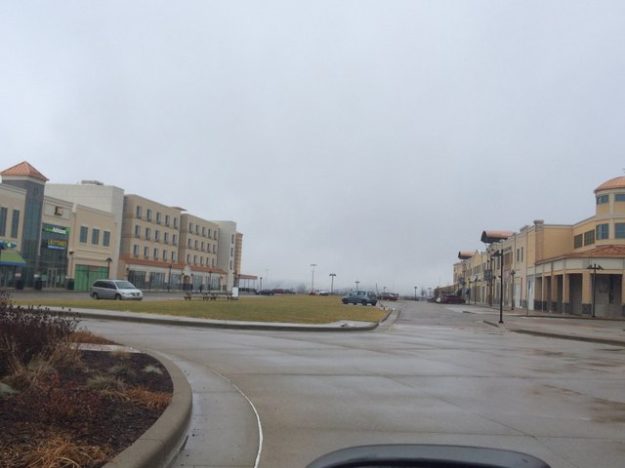 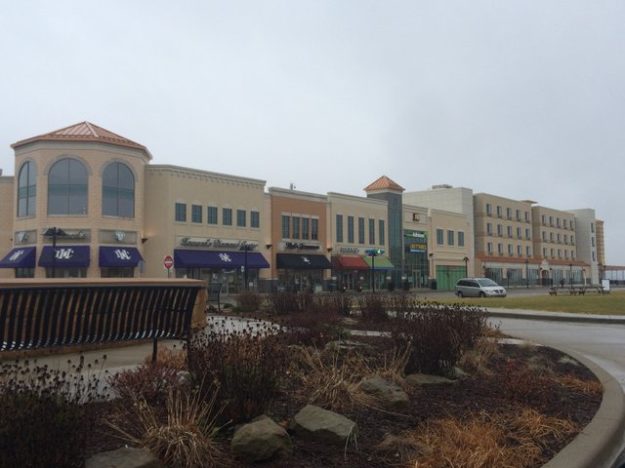 Instead of placing the parking lot front and center, this phase of the development offers a broad, grassy median, with paved, recessed areas for “on-street” angled parking. This configuration intrinsically affords pedestrians a greater safety, convenience and priority than the average power center, even if the enormous median pushes the various rows of shops inordinately far from one another. In some respects, this portion of The Highlands looks a bit more like a lifestyle center…but there’s more to it than just that: 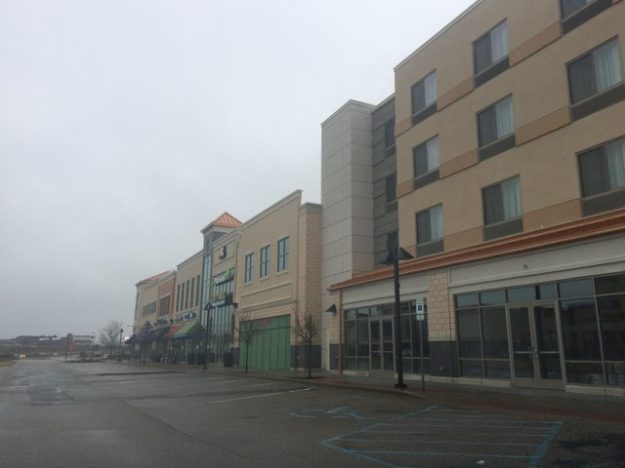 Lifestyle centers typically only involve shopping. But these structures appear to feature an additional floor, as well as a four-story Fairfield Suites by Marriott that had not yet opened at the time of these photos. In other words, this section of The Highlands seems to be attempting something a bit more ambitious. 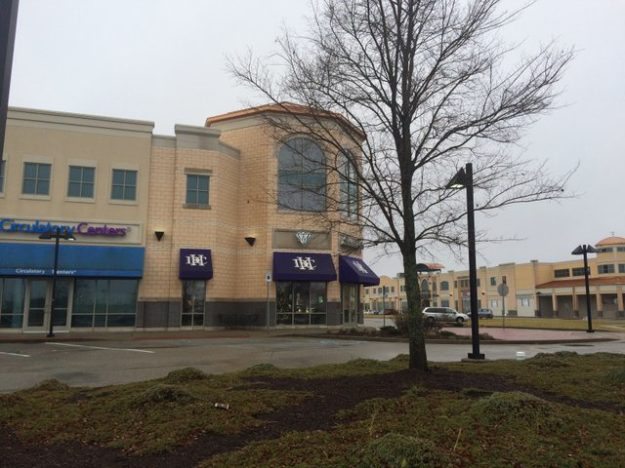 It’s not entirely clear what the intentions are to those upper levels, but—unless (as is sometimes the case) they’re purely cosmetic and lack any usable characteristics—they could serve as office, medical, or even housing. It’s almost like this portion is trying to replicate a town center, featuring the full variety of structures and uses we might have expected in a West Virginia city back in the day…a city like, well, Wheeling. I tip my hat to this developer for trying something a bit more versatile, more aesthetic, and ideally more sustainable than the collection of big boxes and strip malls that comprise the typical power center.

But is it working?  Alas, I’m not so certain. One side of this faux main street—the side with the healthcare uses and the impending hotel—seems to have a solid occupancy, as seen in the photos above. Here’s a closer view: 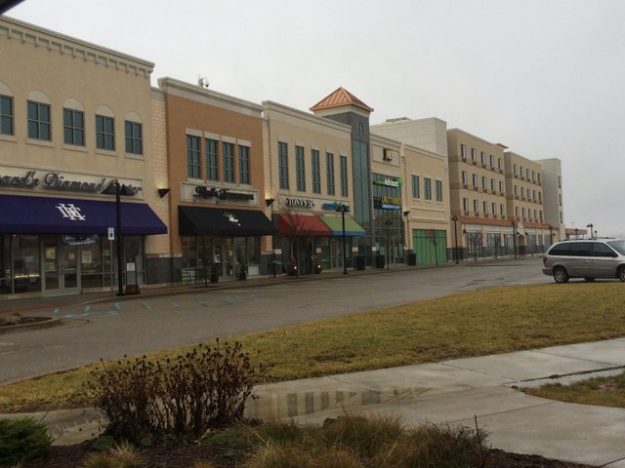 The first-floor retail tenants appear to be mostly mom-and-pops. This could be the developer’s intent—to provide a more local feel to this “main street” portion of a massive, regionally important commercial/retail center. But I doubt it. After all, this phase of The Highlands intends to supplement the rest of the older, more established phases to the development, which look like this: 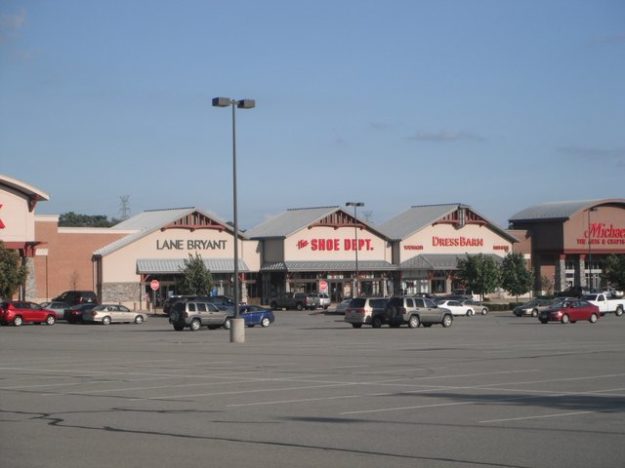 Lots of national chains. By virtue of its different physical form and proximity to the earlier phases, this “main street” section is invariably competing, and if it can’t attract national tenants like Books-a-Million or DSW Shoe Warehouse, chances are it does not command as high of leasing prices. People love those big parking lots.

The opposite side of the grassy median paints a bleaker picture. It features a multi-screen movie theater at one end, near the landscaped roundabout. 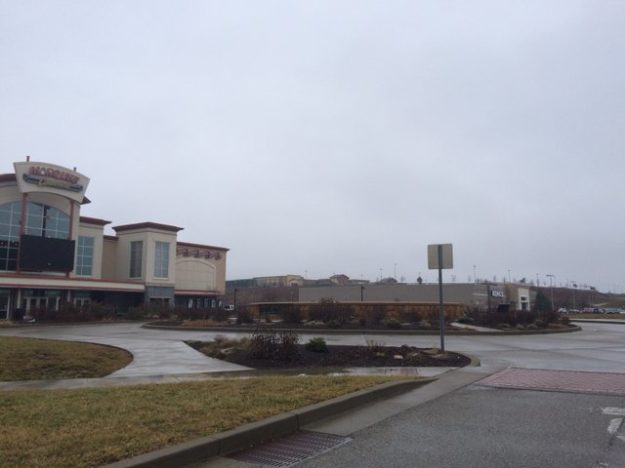 And, on the opposite end, the buildings host a variety of offices, mostly catering to the health care industry, as well as an AT&T branch. 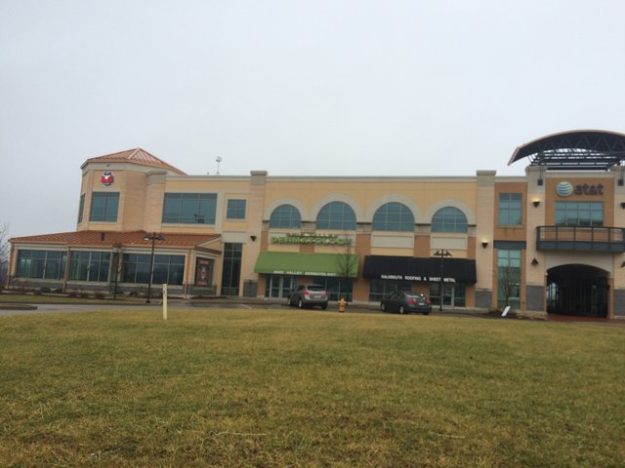 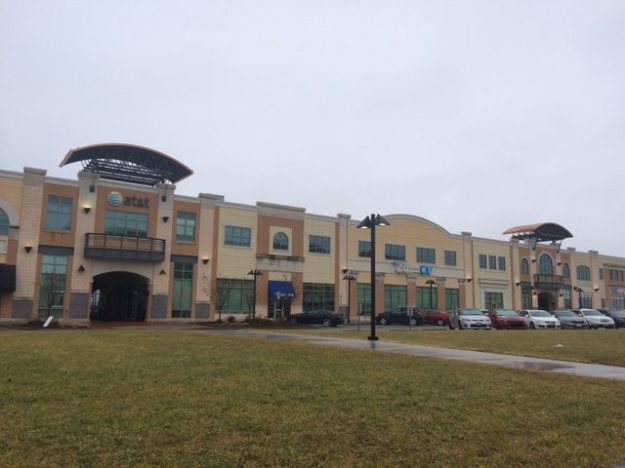 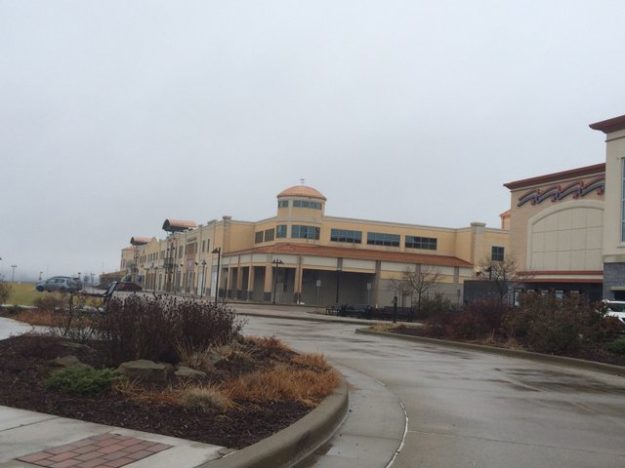 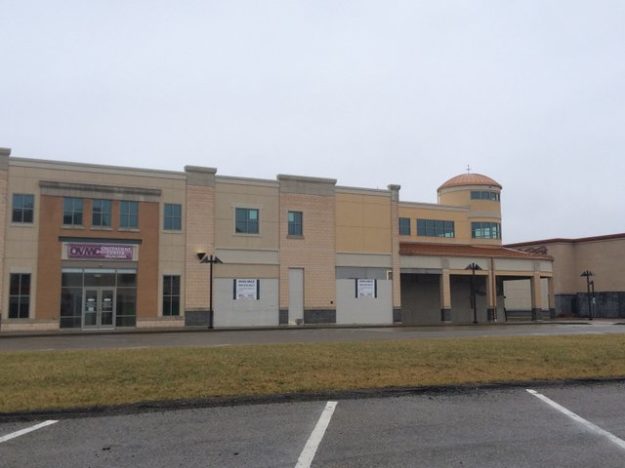 …not only is much of it vacant, it appears that the leasing company has boarded up the windows with weathered plywood. While other parts of this side of the “main street” feature health care tenants, the corner closest to the movie theatre looks like it suffers long-term vacancy—almost abandoned. Not a good sign.

I suspect that this phase of The Highlands is a work in progress; it’s possible that, in another year or so, it will mature and achieve higher occupancy, on par with the rest of the enormous shopping complex. But how long can we expect something like this to succeed? It’s a purely greenfield development off the side of a highway and a good five miles from any major population node, and, despite generally good visual indicators of economic health, it has shed a few tenants in the last two years, such as a Cracker Barrel and, most recently, a Michael’s. I’m not aware that Michaels is struggling nationally, so why did the chain close this location?

The uncertainty evoked by these photos raises a broader question—one that power centers fail to answer, just as lifestyle centers and malls before them. How long will we need these enormous bricks-and-mortar retail campuses, in the age of online shopping? Not only does Amazon show no signs of stopping, as it plops more and more regional logistical warehouses onto the national landscape, but the most successful national brands are earning significantly greater portions of revenue through online commerce. If you thought a dead mall looked bad, imagine what might happen if, in twenty years, the typical American consumer no longer has any need for The Highlands. They’re already unsightly, but things will get a whole lot uglier than a single boarded-up cornershop.

PrevFending off audits with smoothies.
Capitol Hill: defining “historic” with a few strokes of a pen on a map…just like everywhere else.Next

6 thoughts on “A power center turns over a new leaf, only to find more grubs.”