Fending off audits with smoothies.

While it’s not every day that we encounter a business that whimsically combines two seemingly unrelated services, now and then you’ll stumble across that laundromat/nightclub or pet groomer/internet café (probably a bit more common before smart phones became ubiquitous). More often than not, these hybrid businesses recognize the opportunity to commodify multi-tasking. After all, why not groove to some tunes while watching your duds go through spin cycle? (If you get sweaty enough dancing, you might need to throw a few more things into the wash. The owners won’t mind.) Some of the more recent hybrid businesses, like the hipster bar-meets-arcade, simply take what once was an ancillary use and place it front and center. Bars and taverns have long featured a video game or two in the corner; the “barcade” concept simply takes a full-fledged arcade (historically more common in a family-friendly mall) and adds a liquor license.

It remains to be seen whether the nostalgia-driven barcade is anything other than a passing fad, as many hybrid businesses prove to be.   But now and then, a trend becomes the standard, like blue jeans 60 years ago. It wasn’t until the 1990s that the concept of pairing coffee shops with bookstores rose above novelty. Now it’s almost expected that a bookstore will serve sundry caffeinated drinks; I’d guess that those selling primarily new books (a struggling market already) might depend on the coffee aspect for a more consistent revenue stream. Then we witness the hybrid businesses that are virtually inseparable. Kinko’s began in 1970 as a copy shop serving nearby colleges (like USC), but then founder Paul Orfalea discovered a stronger business model (and one less prone to lawsuits from academic publishers) by running a 24-hour operation through a broader base of business and personal copying services.  It expanded to an international chain by the late 1990s, but only when merged with FedEx did it adopt the full range of shipping services. The Kinko’s name is no more (basically all FedEx Kinko’s have shifted the brand to FedEx Office), but the nation’s two largest private shipping companies, UPS and FedEx, now dominate that copying/printing/postal/businesses service market. When hybrid businesses get this successful, they set the new standard for services offered under one roof. These days, the surviving mom-and-pop copy shops must offer particularly niche, customized products if they’re going to compete with the titanic infrastructure of a FedEx.

Walking down the primary commercial street of South Bethlehem (Pennsylvania)    not so long ago, I encountered one of the most unusual hybrid businesses I had seen. 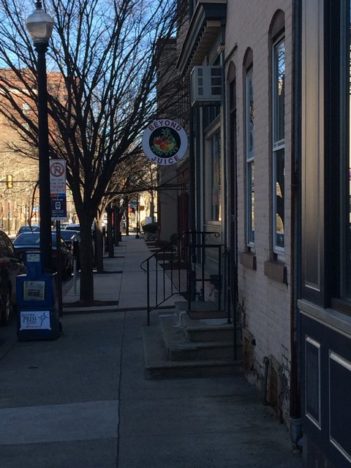 Beyond Juice sits within a tiny little storefront, offering potables from a wide variety of fruits, specifically emphasizing some hard-to-find tropical options. 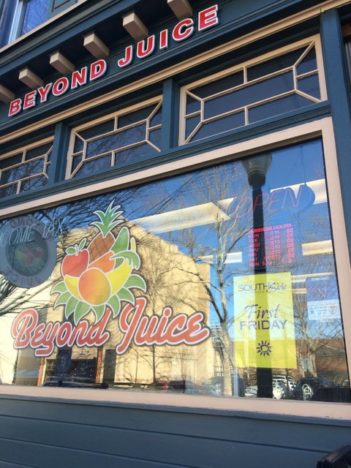 Nothing too remarkable there, since high-end juice vendors have become popular among far more than just the nation’s Angelenos in recent years. But does Los Angeles have a place quite like Beyond Juice? Check out the neon lettering in the upper-left corner of the window. 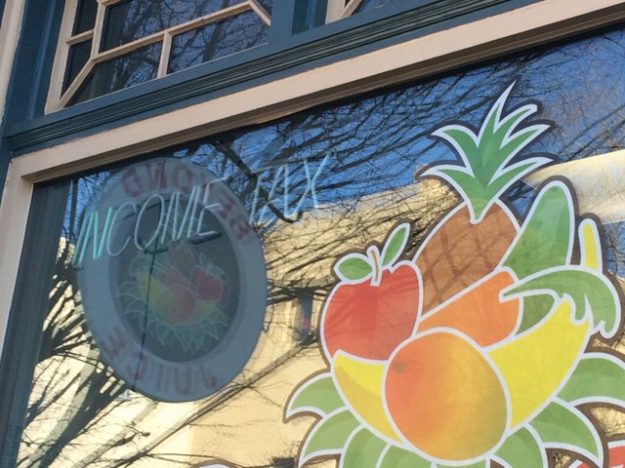 Income taxes. It’s a juice bar that helps its customers file their annual taxes. That must be the “Beyond” part.

Some hybrid businesses feature combinations that require a certain level of public sector policing, in the interest of health, safety and welfare. A customarily youthful venture like an arcade naturally can’t just start serving alcohol; thus, the barcades are fundamentally bars with liquor licenses that just happen to offer lots of vintage video games. Meanwhile, the emergence of cat adoption centers with coffee shops—wedded through the “cat cafés” seen in ever smaller urban neighborhoods—obviously require stringent health code standards to keep potential animal-borne illnesses away from food, as well as to protect the animals from hot coffee or human food not fit for feline consumption. But I’m not aware of what sort of permitting would keep taxes away from fruit juice. 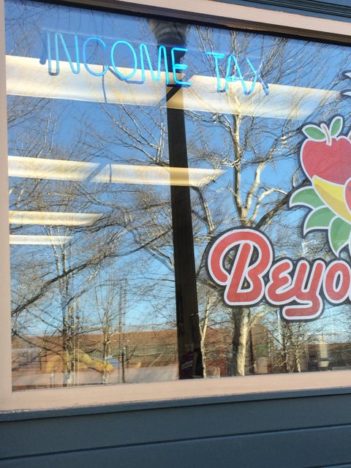 I stepped into the establishment and spoke briefly with the friendly owner. She explained that it’s a joint venture: the wife prepares the juices up front; her husband prepares taxes in a separate room in the back. But the seating visible on their Facebook page does allow consultation while sipping a mango-guava-açaî smoothie.

It seems to be working well enough: Beyond Juice has survived in a less-than-vibrant stretch of the road for at least a few years now. We’re probably approaching the busiest time of year for the back-of-the-house service. Obviously if an unfulfilled demand exists, why not fill it? Or better yet: why not create the demand that no one was aware even existed? With Beyond Juice, Daniel Defoe’s assertion that death and taxes are the only real certainty gets a more optimistic rejoinder. Try some juice, and live. And file those taxes.

PrevSitting on the property, banking on its value to rise.
A power center turns over a new leaf, only to find more grubs.Next

14 thoughts on “Fending off audits with smoothies.”