Coffee klatsch, from your doorway to mine.

Across the country, retail is teetering on the edge of a precipice. It’s caught in a tailspin. It’s on the brink of complete disaster.

I’m sure I could think of even better journalistic catchphrases, but I’m just not that inspired. And I’ve said it all before. Besides, business analysts are covering it nationally and locally. And if they don’t, they’ll pick up the syndicates, like this Associated Press article from my hometown Indianapolis Business Journal. It’s a bad scene for both the businesses and the physical structures that house them. The development community already ensured that the U.S. was ridiculously, grotesquely oversupplied with retail space, manifested by our astronomically high vacancy rates. It’s likely only to get worse, not only from continued bankruptcies of major companies, but because the most nimble, successful ones are realizing that they need diminishing square footage for showroom space. A digital photo of the product on the internet is good enough.

The aforementioned article reiterates something many of us already knew: clothiers are struggling even more than most. Middle-income shoppers in particular seem to prefer buying their accoutrements online. The image of a glamorous (usually female) person with a bevy of paper shopping bags hooked around one arm seems increasingly quaint. But—and I’ll admit this was new to me—the article also references broader trends on how people use their disposable income, which does not augur well for the clothing industry. Relaying information from The Retail Economist research firm, Americans’ overall expenditures for clothing and shoes have plunged from 5.2% of overall expenditures in 1990 down to 3% today. Widely known brands have felt the pinch, resulting in complete liquidations of The Limited and Wet Seal, both of which boasted hundreds of locations just a few years ago. The result? More vacant storefront space.

Some industries have weathered these changes a bit more confidently. Budget and high-end clothiers seem to be hanging in there. So are most grocery stores (though not my hometown’s formerly biggest chain). Restaurants are doing fairly well, though many of the national sit-down chains have also closed underperforming branches, and a few have filed Chapter 11.

One niche retailer that seems to be exploding in the wake of others’ failures is the locally run coffeehouse. Until Starbucks began its ascendency at the turn of the 21st century, I’d wager that many Americans outside the major cities were hardly familiar with the concept of a coffeehouse. Now, even small towns often claim a homegrown java outlet. Yes, they come and go as well, and no other coffeehouse chain has begun to threaten Starbucks’s dominion. But quality locally run coffeehouses now lend an air of legitimacy to the typical urban main street, and the interior ambiance can assume a variety of guises: loungey and bohemian (the preferred style of yesteryear), folksy and antiquey (and possibly mixed with retail), dapper and urbane (and often pricey)—perhaps a combination of the three, or something all its own.

This increasingly salient niche industry asserts itself in peculiar ways, revealed through individual case studies, like one in Easton, Pennsylvania, in the upper-income neighborhood of College Hill. It’s rare that I’ll get to brass tacks on the practices of a business—or two businesses, in this case. But it’s not just the businesses that are intriguing here; it’s their proximity to one another, which is why I featured them in this panorama shot (another rarity for me).

To the left (dark awning, white SUV parked in front) is Mojo 516 at 516 March Street, and, at 520 March Street (striped awning, white coupe parked in front), is Cosmic Cup. Both businesses offer a variety of coffee and espresso drinks, smoothies, counter ordering, free wifi, and about twenty seats, mostly in the form of deuces (two-tops). Neither one remains open at night. And, yes, they are approximately 60 feet from one another. The more established Cosmic Cup located to the area in 2006; Mojo 516 arrived about two years ago.

I’ve patronized both on multiple occasions, so, beyond their online menus, I can fairly report the fundamentals of the two businesses’ offerings. I’d wager that the older one, Cosmic Cup, identifies most strictly as a purveyor of coffees. 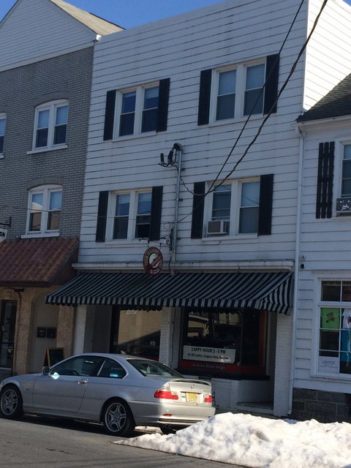 It features multiple blends, and it seems to emphasize coffee as its primary raison d’etre. It offers a few breakfast wraps, bagels, muffins and biscotti (the “light fare”), but these clearly take a back seat to the coffees.   The website clearly emphasizes research and care in selecting the choice organic, fair-trade beans http://www.cosmiccupcoffee.com/our_coffee.htm . Typical of coffeehouses, it’s open bright and early and closes by 5pm daily.

Mojo 516 sells many of the same coffee drinks, but emphasizes them less. 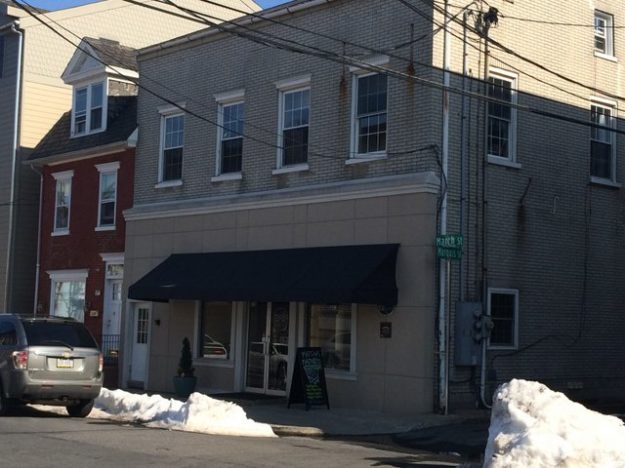 It uses Kobrick Coffee Company: nearly a century old yet still trendy, best known from its hip bar in the fashionable Meatpacking District of New York City, but, incidentally the Mojo 516 website doesn’t reference this choice roaster.   Inside the establishment, the menu displays devote far more real estate to the smoothies and juices, which cost nearly triple those at Cosmic Cup. The coffeeshop also features a greater variety of prepared yogurts, salads, homemade, wraps, and the usual bagels and pastries. It stays open an hour later than Cosmic Cup.

Still sounds like a lot of overlap? It is, so, aside from which foods the two places emphasize, it’s critical to delve into their underlying character and personality, which of course involves far more of my subjective opinion. Sure, I can’t be completely impartial, but does it matter? Comparing two coffeehouses is hardly a science. At any rate, the older Cosmic Cup seems more to adopt the conventionally boho approach: it’s a smaller space and more crowded, a little grungy (but not dirty), the furniture is worn. In keeping with its emphasis on coffee, Cosmic Cup offers a superior roast in my opinion. The eclectic background music draws rarely pilfers any Top 40 hits. Perhaps as a result, the clientele seems older, more aligned with the collegiate atmosphere (Lafayette College is a stone’s throw away) and ultimately more diverse. Professors, affluent retired neighbors. The website is less polished, but it also seems more homegrown and personalized.

Conversely, Mojo 516 is Spartan and clean. Much of the floor space is empty and décor is minimal. The fruit juices, while expensive, seem to be of a quality at parity with their prices: that is, they taste like they use fresh ingredients rather than mixes or flavorings. (I can’t vouch for the smoothies at Cosmic Cup.) Music is routinely Top 40—very similar to what you might expect in a gym, and, in the long run, the atmosphere more than slightly resembles s gym’s juice bar. The place attracts a much younger demographic—particularly slanted toward college-age students, and strangely overwhelmingly female. Mojo 516’s website is more professional looking, but, in the end, it’s also clearly derived from a purchased template with minimal personalization.

It doesn’t take more than an elementary understanding of economics to determine that the two coffeehouses compete with one another. And, when two establishments open in such close proximity to one another, one would expect that they would siphon some of that client base, resulting in diminishing returns for both. But maybe those subtle differences are enough to keep Cosmic Cup and Mojo 516 in a sort of symbiotic co-existence. From my visits, they seem to be doing well. I suspect both coffeehouses have their loyal patrons: people seeking creative coffee drinks probably favor the former; those seeking fresh fruity drinks prefer the latter.

And, it may go without saying, but the other reason for their close proximity may be the desirability of the setting in general. Recall that panorama shot. Both are on a pedestrian scaled, urban street with century-old structures. This seems almost invariably to be the place where locally-owned coffeehouses thrive. I can only think of a handful of coffeehouses in suburban, auto-oriented, strip-mall settings that have lasted beyond the two-year point. They just don’t succeed in suburbia; instead, Starbucks reigns supreme. One might infer that suburbanites are less impelled to support mom-and-pops and prefer the consistency and reliability of a national brand, or it may go hand-in-hand with youth culture and what is “cool”. Local coffee roasters owe their increased cachet to the escalating cultural value, particularly pronounced among young people, for older buildings in urban settings. It’s a strategy that works for distilleries and breweries just as well. Hip uses need to go in hip buildings; it’s necessary for that gestalt.

Lastly, the proximity of Cosmic Cup to Mojo 516 may give the two establishments a better opportunity to emphasize those subtle differences. Though it may seem to defy common sense, even much larger national brands sometimes locate in equally close quarters. After all, we’ve all witnessed how Walgreens and CVS like to hug different corners of the same intersection. In this case, the two drug stores can compete by offering highly particularized sales, or emphasizing internal layout, customer service, aesthetics, or other surreptitious strategies to foment customer loyalty to one of the two brands over the other.

I may very well be splitting hairs with this intensive of an analysis over something so seemingly inconsequential. But, as retailers and property managers witness the erosion of their traditional client base, they must resort to smarter strategies to get people in their doors. If they fail, they can expect more of their product to gather dust on the shelves, subverted by online shopping. Or another caffeine-rich beverage could undermine coffee’s dominion. Yerba mate? Mountain Dew? Another attempt to introduce Water Joe? Like it or not, the coffeehouses of America must react, or they will face the same challenges that have undermined Sports Authority, Cabela’s and Gander Mountain.

PrevCapitol Hill: defining “historic” with a few strokes of a pen on a map…just like everywhere else.
Alpha, New Jersey: The town the freeway DIDN’T destroy.Next

13 thoughts on “Coffee klatsch, from your doorway to mine.”