Capitol Hill: defining “historic” with a few strokes of a pen on a map…just like everywhere else.

Capitol Hill in Washington DC touts itself as one of the nation’s largest and most intact historic districts. Parts of it rest under the shadow of the dome of the U.S. Capitol (at least when the sun is setting), and the entirety of the neighborhood is a quick walk or subway ride to the National Mall. Yet, for the most part, the expansive residential district, where most housing construction peaked in the late 19th century, remains fully outside the orbit of the tourists that throng to the Mall’s attractions every summer. It’s strange, really: turn the corner from the Library of Congress, and you’re there, in Capitol Hill. Yet it falls almost completely outside the tourist radar: while some companies do offer guided tours, the fact that they’re the cheapest DC tour packages available suggests the modest demand.

In the eyes of its 35,000 residents (which includes successive decades of legislative glitterati), the neighborhood’s relatively low profile is, no doubt, a blessing for the most part. While it offers the most contiguous embodiment of attached housing in the entire District of Columbia, it lacks the same cachet as the French Quarter or Garden District in New Orleans, or the North End in Boston. Visitors come to the nation’s capitol in droves, but Capitol Hill rarely enters their purview. As a result, despite some vibrant commercial nodes, the expansive neighborhood seems quiet and unsullied. 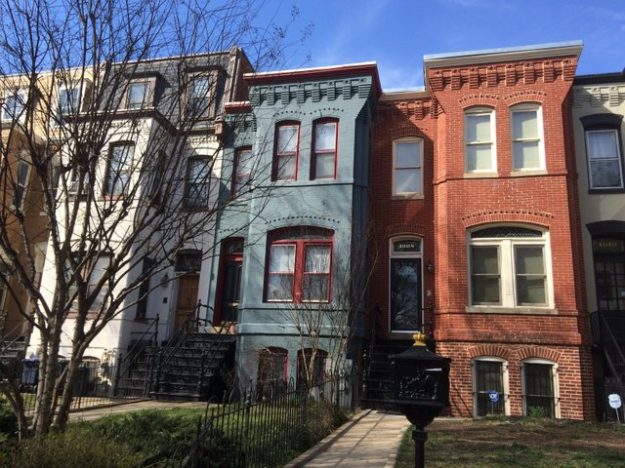 The rowhomes of Capitol Hill (and Washington DC in general) also offer a remarkably different aesthetic from their equivalent in Baltimore, just 45 miles to the northeast, or Philadelphia, another 100 miles beyond. While building materials or architectural languages provide the primary source of variety among attached housing in Baltimore, in DC the owners routinely paint them distinctly—even the bricks. A row of wooden Victorians in Philadelphia may involve different colors on some of the accents and trim, but such distinction among brick attached housing or brownstones is virtually unheard of. In DC, it’s the status quo.

Inevitably, not all streetscapes are equally colorful—like the homes on the left in the photo below: 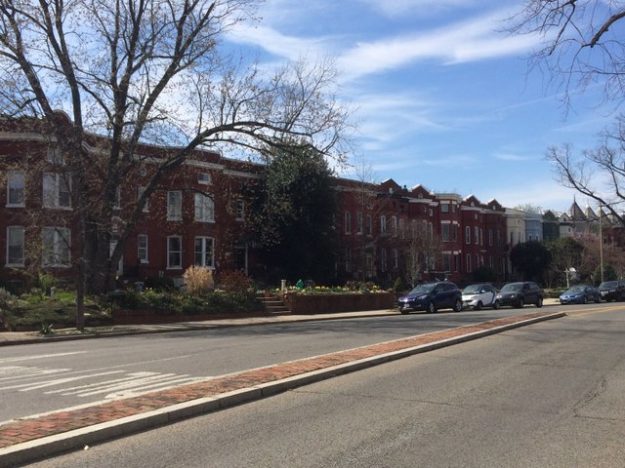 But check out the homes in the distance, to the right in the photo. They offer far more of the typical variety one can expect to see in Capitol Hill. Each house is distinctly visible form hundreds of feet away, thanks to those colors. Even if the owners elect not to paint the brick, it is rare that two adjacent units will use this exact same coloring for ornamentations: cornices, columns, window treatments. Like this trio elsewhere in Capitol Hill: 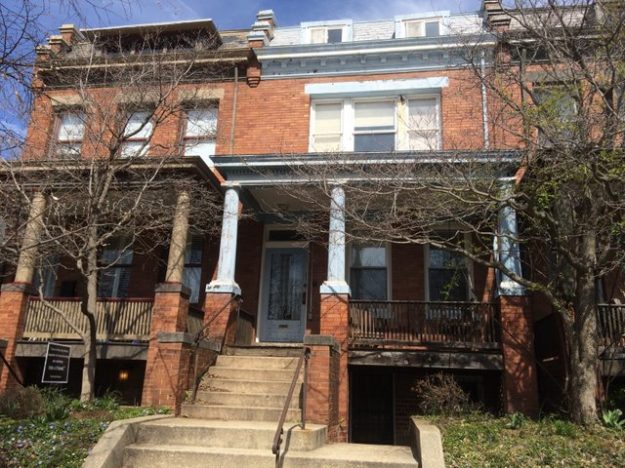 Otherwise, they go all out, like this series of modest two-story homes: 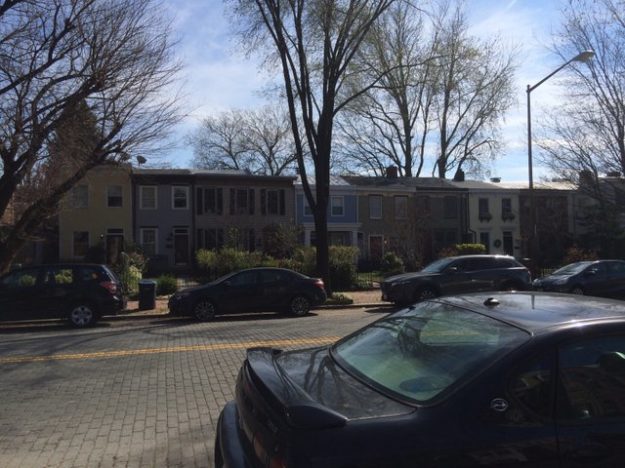 You’d be hard-pressed to find such colors in Philly or Baltimore. (Granted, the homes in the second photo are mostly wood, whereas housing of a similar age and size in Philly is primarily brick. But in DC, whatever the material, the owners add color.) It’s a collective, conscious decision—a flourish that distinguishes Washington’s oldest neighborhoods from other Mid-Atlantic rowhome districts, and it appears multiple generations of homeowners have embraced this aesthetic. (Within DC, this approach is hardly unique to Capitol Hill. Two miles to the west, on the other side of the National Mall, the much smaller Foggy Bottom neighborhood/historic district offers a similarly broad palette.)

Since much of Capitol Hill has enjoyed recognition through the National Register of Historic Places since 1976, the National Park Service offers a brief but thoughtful profile of the neighborhood on its website.  The officially recognized district increased its boundaries in 2003, and now it falls essentially within the area I have delineated with purple in the map below:

(Of greatest importance for the rest of this essay is 14th Street NE/SE, which forms the district’s eastern boundary.) For those who have never visited Capitol Hill before, I encourage them to use Google Street View and to take a digital stroll, which is the best way of discovering how vast and intact this neighborhood is. It’s hard to find any gaps (where rowhomes got demolished), any infill (where an anachronistic contemporary style replaced the original structure), or even any structures that appear dilapidated or neglected. The half of the neighborhood closest to the US Capitol has held up remarkably over the years, even while much of the city declined precipitously in the 1970s and 80s.

I also encourage a digital stroll because I’m about to point out just a few more exceptions to this otherwise ironclad aesthetic. As my map noted earlier, the Historic District has strict boundaries, which includes 14th Street (SE and NE) to the east. Here’s a view along Massachusetts Avenue, looking at the side of 14th Street that falls outside the border line. 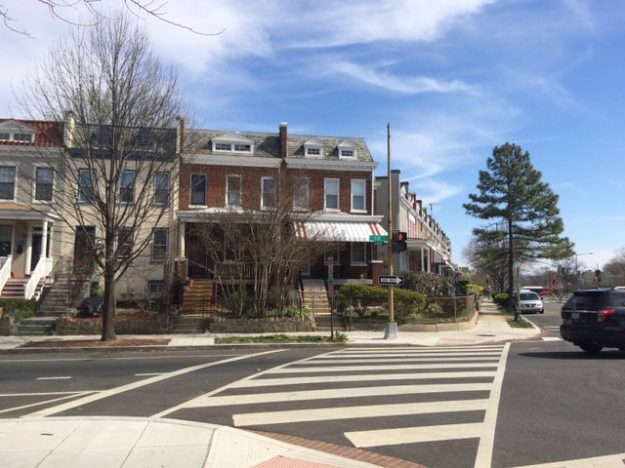 Notice anything? It’s not so much the colors as an additional feature that, up to this point, most of the housing in the neighborhood has lacked. Here’s a view down Massachusetts Avenue, west of 14th Street and thus outside the historic district boundaries: 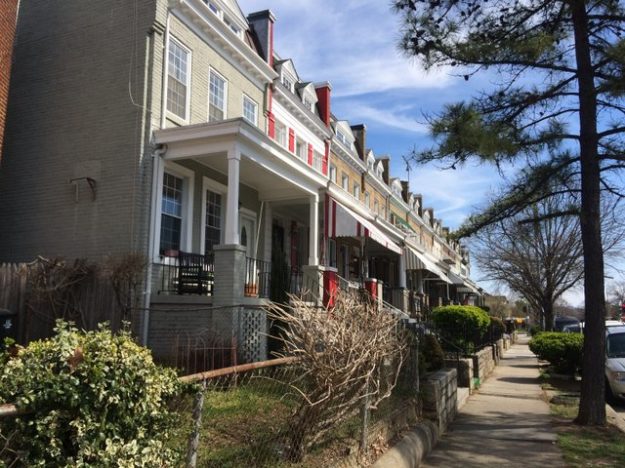 Is it more obvious now? Check out those awnings! They were absent in all my previous photos of Capitol Hill. Here’s a view of that same row of houses: 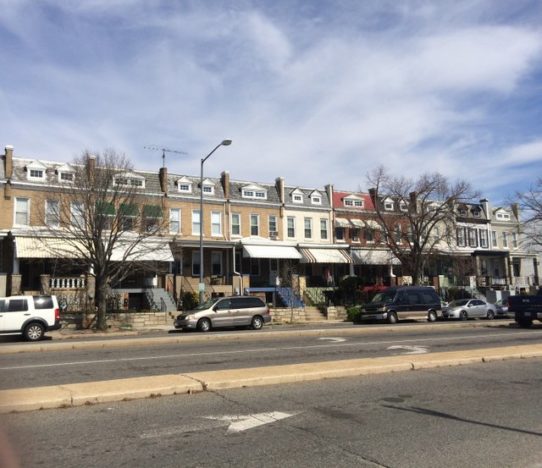 The majority of the homes have awnings on their front porches, and some even have them over the windows on the second floors.

In most historic districts, such modifications are a big no-no. Without having to review the by-laws for Capitol Hill Restoration Society (the organization whose advocacy helped the neighborhood achieve historic district status) , it’s easy to infer the regulations on awnings. Quite simply, you don’t see them anywhere within the purple box on the above map. Verboten. Awnings are, I suspect, only the most conspicuous of regulations: delve into the standards, and I’d wager Capitol Hill has strict standards for doors, porch materials, shutters, window treatments, gutters—you name it. They might even restrict exactly which colors are acceptable among the seemingly expansive palette.

But, east of 14th Street, it’s a different story. Though the architectural landscape really doesn’t change so much, the ties that bind the residents together seem much weaker. I believe these easterly blocks place us just outside the Barney Circle Neighborhood, in which the biggest component to the identity is the mere fact that it is not Capitol Hill. But who exactly dictates neighborhood boundaries? Neighborhoods aren’t distinct political entities, so they don’t involve annexation proceedings if they shrink or grow; all the neighborhoods I have referenced in this blog post still fall within the District of Columbia’s federally designated limits. In many cases, the real definition of a neighborhood has more to do with a shared “buy-in”—that collective conscious decision—than any overt political designation with spatial ramifications. Then again, that shared buy-in could be intrinsically political and spatial. Evidence suggests that an increasing contingent in Barney Circle would like to see its housing stock preserved as diligently as the homes in Capitol Hill. This should come as no surprise: after all, by the mid 20th century, the eastern reaches of Capitol Hill declined economically, with middle-class homeowners fleeing as the crack epidemic (and its ensuing crime) placed much of the District in a tailspin. As recently as 1995, the socioeconomic differences between Capitol Hill west of 14th (the historic district part) and east of 14th (the Barney Circle part) were huge. As revitalization has leveled the playing field—making ALL of the neighborhood affluent—the population in the historically less prestigious Barney Circle portion now ascribes to many of the same preservationist values long associated with the fancy Capitol Hill Historic District. It looks like they’ve already appropriated the iconic signs: 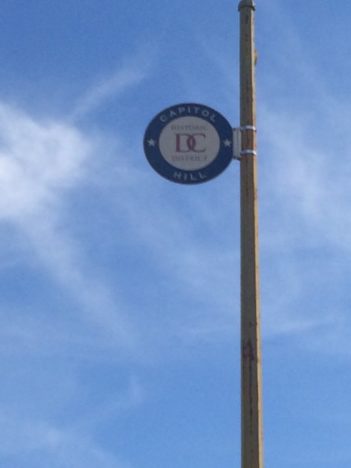 While visitors can find the circular markers all across the actual Capitol Hill National Register Historic District (understandably), this specific one hangs on a pole east of 14th Street, which is technically inaccurate. Either no one cares or this specific sign intends to help push the preservationist worldview eastward.

And at 14th and Massachusetts, it’s not hard to sport individual efforts to embrace that aesthetic. Take these two homes, for example: 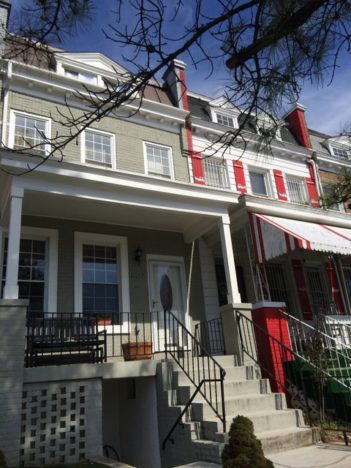 The one on the left employs the painted brick, but has stripped off all the bric-a-brac we see on the home to the right: bars in the windows, painted stairs, horse-and-buggy decals on the shutters, and those enormous awnings. My suspicion is the homeowner on the left invested the extra cash to achieve conformity with the look that is enforced west of 14th Street (i.e., 100 feet away) with the hopes that eventually the others on his or her block would also relent. Bars on windows might deter burglars, but they don’t look good, and they convey the notion that a neighborhood is unsafe. Most people’s assessments of crime in Barney Circle would suggest they are no longer necessary. Time will only tell if this particular homeowner has judged correctly, but a glance at Zillow’s listings suggests that the home on the right might go for $50K more than the one on the left. Zillow is hardly the final authority, but since appreciation is the logical aspiration for most homeowners, I’d wager that, in a matter of another decade, the easternmost reaches of Capitol Hill/Barney Circle will start mimicking the preservationist gestures that long cemented within the Historic District, regardless of whether the “new portion” achieves district status. And, as pressure to conform escalates, those bulky awnings will be increasingly difficult to spot. Oh well—if people want to personalize their home’s façades, they can always paint it a new color. In DC, they encourage it.

PrevA power center turns over a new leaf, only to find more grubs.
Coffee klatsch, from your doorway to mine.Next

7 thoughts on “Capitol Hill: defining “historic” with a few strokes of a pen on a map…just like everywhere else.”