Stretching 144 miles from Harrisburg, Pennsylvania to the Holland Tunnel just outside Manhattan, Interstate 78 is hardly among the longer limited-access highways in the country. And, while certainly busy, I’d imagine plenty other freeways out there link a greater number of major population centers than I-78. Elsewhere in New Jersey, the Turnpike unquestionably carries a far greater traffic volume. Truth be told, it’s hard to think of anything distinct or remarkable about I-78. And even the segment I’m about to analyze is no great shakes. But the fact remains that, just to the east of the Delaware River that forms the boundary between Pennsylvania and New Jersey, the path of this freeway makes an unusual turn—literally. 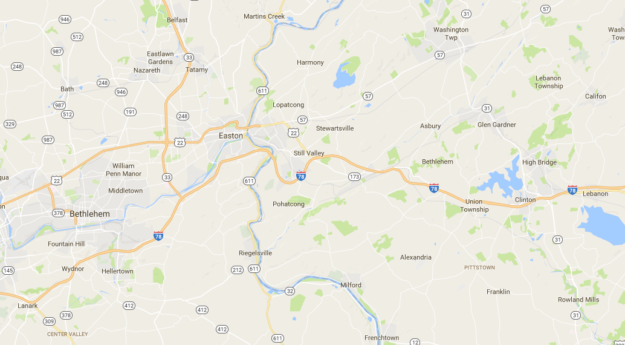 See it? Essentially the road creates a U shape when the more logical trajectory would have been a straight line, thereby adding at least two miles to the road’s length. So why did the Federal Highway Administration (FHWA) design this strange bypass? A closer zoom might help explain. 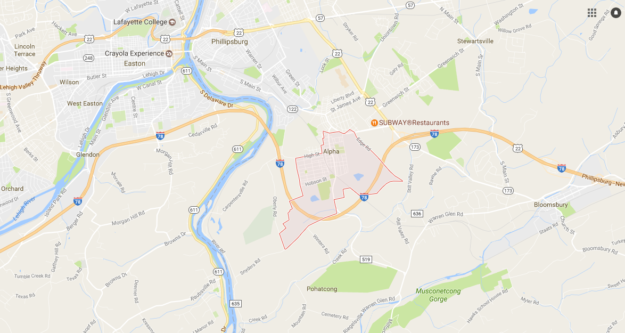 This time, I’ve added Google Maps’ red outline to emphasize the key municipality affected here. What we’re witnessing is, as is obvious by now, the Borough of Alpha.

The serene municipality of approximately 2,300 seems to lack any sordid details in the past that would give it a colorful history. Quite simply, it was a company town, and even though the cement industry that spawned its growth shuttered generations ago, the municipality has held steady thanks to its proximity to larger economic centers: specifically Phillipsburg, NJ and Easton, PA, which together comprise the eastern edge of the Lehigh Valley region (whose largest two cities are Allentown and Bethlehem, both in Pennsylvania). Alpha is close to a lot of things—it is in New Jersey after all—yet it still feels much like a rural town.

As the official website for the Borough of Alpha indicates, the area owes its settlement almost completely to enterprise. A.B. Bonneville, an Allentown resident passing through the area in 1891, noted the quality of limestone deposits and decided to set up a cement factory in the area. He founded what eventually became the Alpha Cement Company in 1895, and his business quickly attracted recent immigrant families that clustered around the business.  Shortly thereafter, Bonneville left his company and founded another cement manufacturer, called Vulcanite, on the other side of this settlement.  Within ten years, the community had calcified enough to warrant disaffiliation from the surrounding rural Pohatcong Township, and the State of New Jersey incorporated the Borough of Alpha in 1911.  To this day, some locals refer to the different sides of town as “Alpha” and “Vulcanite”, though the plants have been closed for about a century.

Unfortunately, I limited my photos of Alpha to a restricted but compelling district. That said, the area strikes me as distinct for two key characteristics: 1) its settlement and incorporation at the turn of the 20th century is uncharacteristically late for a state like New Jersey (it’s a young town); 2) Alpha is astonishingly lacking in any real commercial node. Despite the fact that it sits less than a mile from the much larger city of Phillipsburg, and a streetcar once connected the two communities, Alpha lacks any evidence of a mixed-use district where passengers would disembark. There’s no downtown, no main street, not even a real intersection. This Google Street View of a strip mall offers the highest concentration of commercial facilities in the borough. Besides this, scattered auto-oriented uses in the periphery comprise the extent of commercial activity. Alpha may have owed its origins on an industry (which apparently closed by World War I), but today it’s a bedroom community in the fullest sense of the word.

It would be unreasonable for me to postulate that these characteristics had any bearing on the FHWA’s decision to bypass Alpha in the path of I-78. Clearly, in this case, the planners chose an inefficient serpentine path, despite the inevitably greater construction costs over a beeline trajectory. Why would they do this? Usually, it’s because of topography. While much of the Delaware River Valley is quite hilly, the terrain does not pose any great challenges around Alpha. Another reason could be the greater cost of land of going through an urbanized area. While land values in Alpha are probably greater than the surrounding farmsteads, they’re nowhere near as high as if Alpha had a high concentration of commercial properties, or if it were a particularly affluent community. (Alpha is resolutely middle class.) Besides, many of the earliest limited-access highways careened right through urban downtowns, so the earliest architects didn’t let population density deter them.

So what’s the reason for the bypass? Could the planners have avoided this borough of 2,300 when designing I-78 because of a specific feature unique to Alpha? I’m going out on a limb here, but let’s zoom in just a bit further to that Google Map. 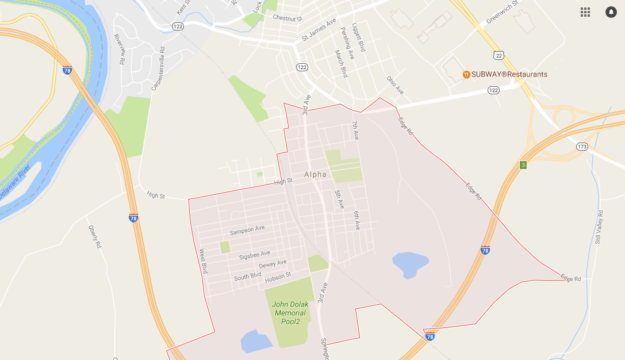 Notice that patch of green immediately to the right of the word “Alpha” on the map. Want to guess what it is? 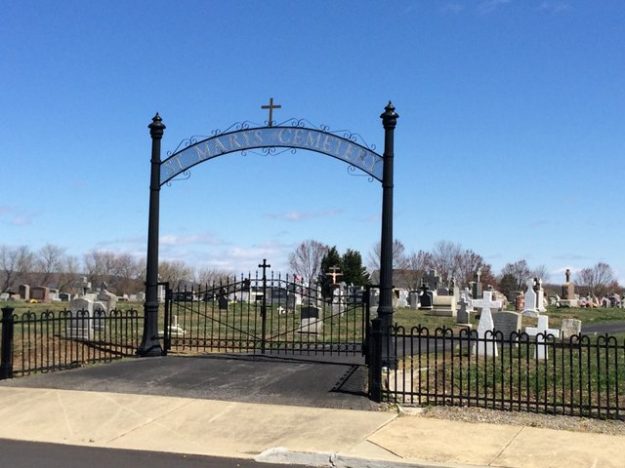 It’s a sizable cemetery. Cemeteries, to be frank. I couldn’t confirm exactly how many there are, but at least two. Here’s another label on essentially the same plot of land. 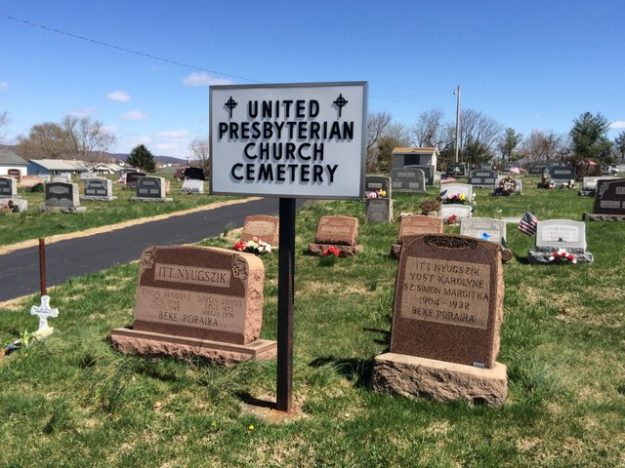 So Catholic and Presbyterian. That’s all fine and well, but then there’s a third. 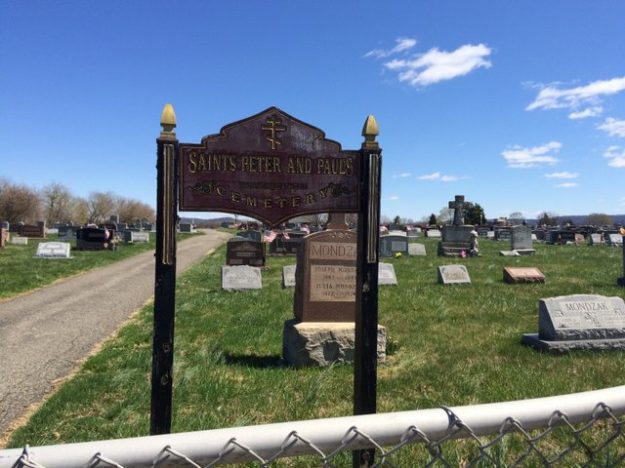 This is the clincher: it’s the unmistakable cross of an Eastern Orthodox church—a far less common sight than the other two Christian expressions. But not so rare here in Alpha. The Orthodox cross appears in multiple incarnations throughout this hybrid house of eternal rest. 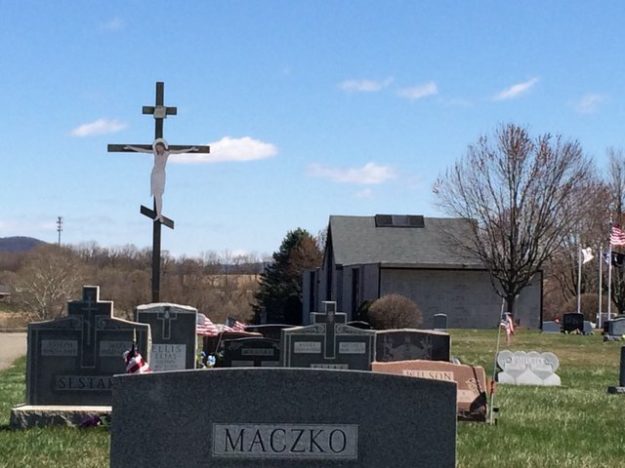 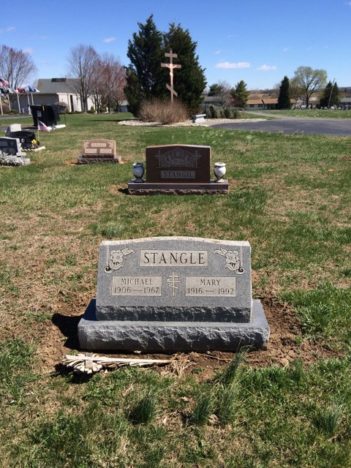 While Ukrainian, Russian, and other Eastern Orthodox faiths are a relatively rare sight in much of the country, they’re fairly easy to spot in eastern Pennsylvania and Western New Jersey. More specifically, these faiths align strongly with the immigrant groups that Alpha originally attracted. Per the Alpha website, these included Hungarian, Slovak and Italian arrivals. And judging from the last names, the ethnicities intermingled quite fondly in the afterlife, jettisoning cultural differences to capitalize on limited real estate in the borough’s only dedicated space for a cemetery. 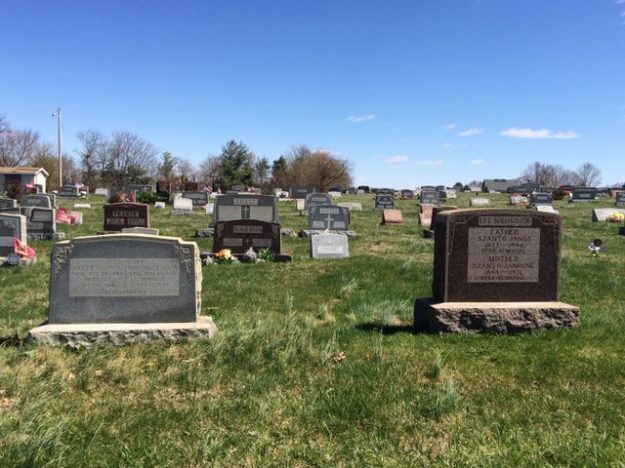 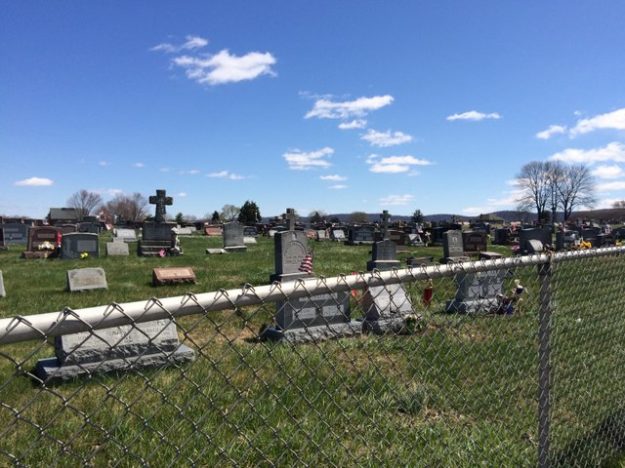 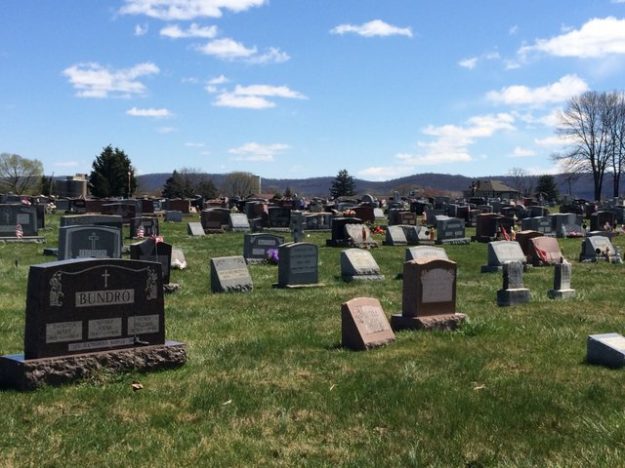 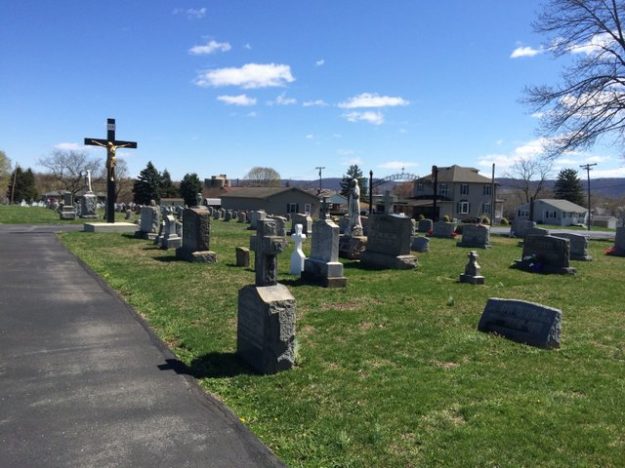 I have no idea if the FHWA ever proposed to plow I-78 right through Alpha. But it sure looks like, judging from the unusual path, that the bypass to the south of Alpha was a last-minute decision. And if they did originally propose a path right through the borough, the very odds that it could disrupt a sacred space would help galvanize opposition to this plan. Meanwhile, the chances that such a proposal would affect the burial ground of virtually all the historic immigrant ethnicities in Alpha could strengthen the remonstrators’ case even further. Putting religious differences aside, they’d unite in defeating such a proposal. Urban, rural, suburban or small town, cemeteries fall under particularly high preservationist and archeological scrutiny when construction involves earth disturbance. 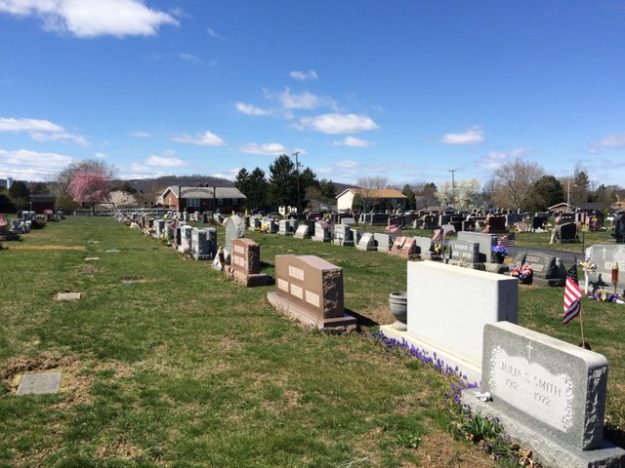 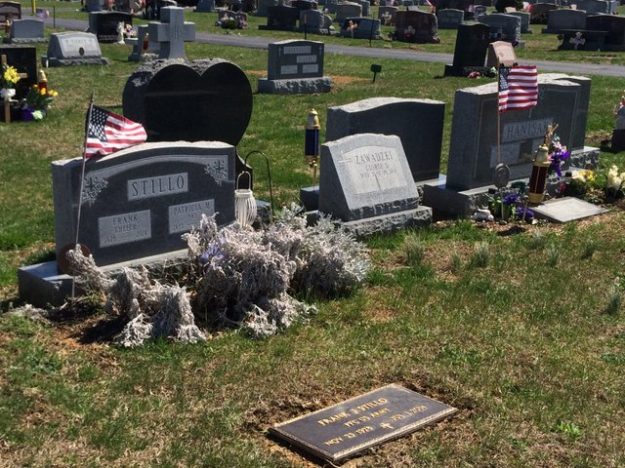 If I-78 had taken the beeline approach, it would have installed a huge chasm that would separate Alpha and the much larger Phillipsburg to the north. Freeways are chasms, whether urban or rural. They rarely confer a net benefit to the previously quiet residential lands nearby. Home values plunge. In the ideal world, the planners and engineers who constructed this strange, curvy path conducted a cost-benefit analysis, assessing the added price for extra lane miles of freeway through the U-shaped path, versus the inevitable loss of property value to the formerly quiet communities of Alpha and Phillipsburg.

In this case, Alpha won. Opposition prevailed, defeating the Robert Moses mentality of freeway construction (i.e., the quickest way from A to B). Whether because of a cemetery, a well-organized Orthodox contingent, a sinkhole, or general public disdain for high-speed vehicle sewers, Alpha is all that much stronger for this decision. Or it may be that planners and engineers simply knew better. Throughout the late 1950s and1960s, freeway design went right to the heart of town, aiming to revitalize ailing downtowns by improving their access from the suburbs. (It didn’t work.) But, like the Borough of Alpha, I-78 was a late bloomer; only a few segments operated in the 1970s, and the bulk of construction work took place in the late 1980s. By this point, not only were planners well aware of the ineffectiveness of plowing right through a town, but concerned citizens knew how to organize to defeat such a path. The result? Alpha and Phillipsburg both survive. And so do hundreds of graves in a distinctive cemetery, with Italian surnames next to German Palatines, Slovaks next to Magyars.

PrevCoffee klatsch, from your doorway to mine.
Have fun. Violators will be prosecuted.Next