Undone by the dome.

Strolling through the town of Bowman, North Dakota last summer (which is how one gets around if one finds oneself in Bowman…obviously), I came across a pretty slick looking geodesic dome home. 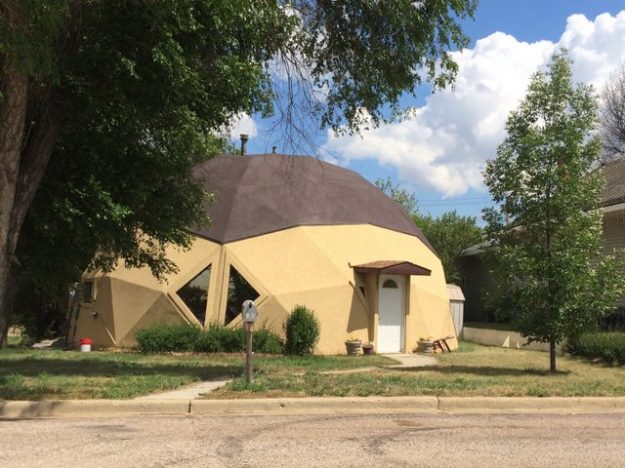 We see these from time to time. After all, they were quite the fad for a few years, peaking around 1970. While I suspect they enjoyed a somewhat greater prominence in the West Coast, we clearly could stumble upon them just about anywhere. Like a town of 1,600 in the southwest corner of this sparsely populated state.

What struck me as strange about this particular geodesic dome wasn’t the structure itself, but how it stood unassumingly within a standard small-town residential context. Here’s the housing on either side of it: 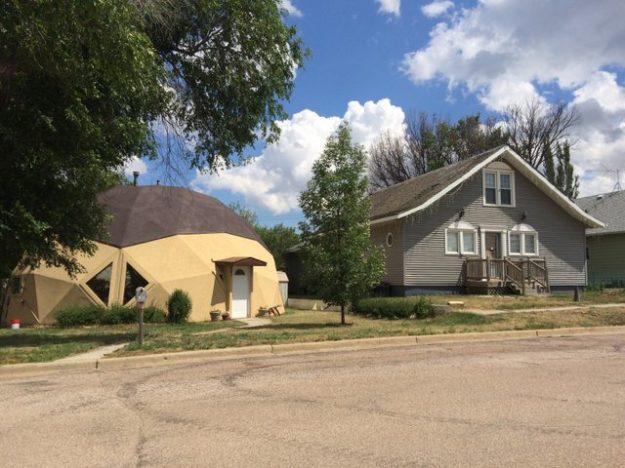 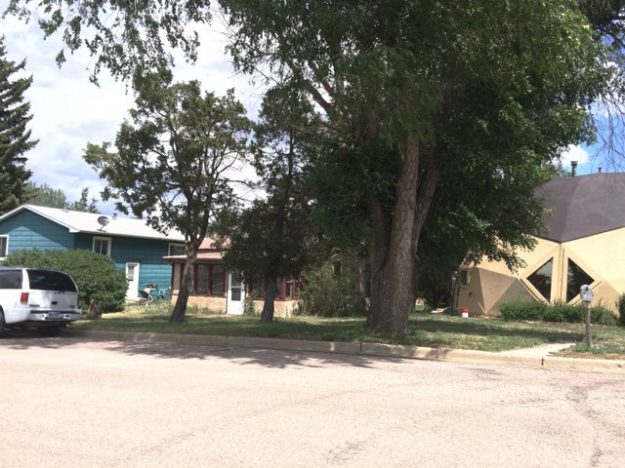 Pretty conventional stuff. In fact, by almost every other metric, Bowman is a typical Midwestern small town, with few other (if any) visually distinct structures beyond this dome. And the dome doesn’t really assert itself: tucked in the middle of a block on an exclusively residential street, it only catches attention because the physical form is so different. But it’s hardly a centerpiece to the town, and most passers-by would never notice it.

I can only speculate on the context of this dome in particular. Was it an infill development, built at a later point than most of the other housing nearby? Does it have a particular story? Is it controversial? No doubt I’m projecting a bit of my own prejudices into the narrative by presuming that the dome defies Bowman’s otherwise conservative aesthetic. But it’s hard not to wonder if it required special approvals to get beyond local zoning regulations, if the City of Bowman even has zoning. (Turns out it does.) But there’s my bias popping up again. Why should the massing, shape or physical form of a house matter, as long as it complies with existing zoning for setbacks, height, or building/impervious coverage? A house is a house, regardless of how idiosyncratic it may be. And, during that brief period when architectural impresario Buckminster Fuller popularized the dome, drawing attention to its incredible load-bearing capacity and resistance to high winds, they really did become a household term.  In that respect, a town in the American Great Plains, where powerful winds are an almost daily occurrence, the ability of a geodesic roof to deflect wind shear might make it particularly apt.

Simple as it may be to zone for the geodesic dome, they face a greater crucible when it comes to internal operations. Chimneys, sewer vents, and window placements offer huge challenges to local building codes, particularly if the dome is large. And, although typically structurally sound—as they typically are—the sheer number of “omnitriangulated” seams (where each triangle joins its neighbors) can radically increase the likelihood for water leaks. Since most people don’t demand triangular shaped sheathing material, much gets wasted in the cutting process. But the real clincher—which probably explains far more than anything while geodesic domes remained a short-lived fad—is the tremendous waste of space on the interior, when placing conventionally rectangular furniture along curved walls, which is always a problem if the corners of rooms don’t meet at right angles. And who wants to get a vacuum cleaner back in that wasted sliver behind the couch?

This home in Bowman may be the only geodesic dome for a 200-mile radius, not only because of their scant popularity, but because this part of the country is uninhabited in general. The domes that survive probably retain value due to their novelty, but they suffer the same meteoric sociocultural ascendancy as an innovation in fashion: the trademarked Hypercolor t-shirts come to mind. As writer, publisher, green construction advocate, and former geodesic dome resident Lloyd Kahn noted, they’re “smart but not wise”.  Kahn also notes, as is often the case, the yawning disparity between the integrity of the principles governing such a design and the checkered results of the physical follow-through.

It remains to be seen whether the burgeoning passive house movement will revolutionize construction or will ultimately stand in as the geodesic dome of the 2010s. For the foreseeable future, at least, Bowman has a well-maintained relic of the 1970s, and if a tornado ever sweeps through town, it’s probably one of the best places to bunker down. Finding room for a nightstand beside the bed is an entirely different story.

PrevSetting bounds for the bail bonds.
Sitting on the property, banking on its value to rise.Next

9 thoughts on “Undone by the dome.”