Sitting on the property, banking on its value to rise.

Despite the seismic cultural and political shift that typically takes place every four or eight years, Washington DC has enjoyed a growth trajectory that surpasses most other US metros. In the first ten years of the 21st century, the region grew 16.4% –fourth highest among the ten most populous metros, and it proved particularly resilient during the Great Recession near the end of the decade, when most other regions experienced population stagnance or even loss. Since 2010, the full metro has been growing at least 1% a year, and in 2015, it reached a milestone by becoming the sixth most populous in the US, surpassing metro Philadelphia (which means it’s also behind only New York among metros in the Northeast). But even the District itself (the municipal limits of the national capital), after hemorrhaging residents for most the second half of the 20th century, enjoyed a steady 5% rebound in the first ten years of the millennium. And, since then, the federal districts has welcomed new inhabitants to the tune of 2% growth per year—a remarkable achievement considering that, in 2000, the city was down nearly 30% from its 1950 peak of slightly over 800,000.

So the entire metro is booming—a region that spans three states (Maryland, Virginia, and even the easternmost panhandle of West Virginia). Cranes punctuate the sky at numerous locations, broadly visible when crossing the expansive Potomac River. However, one area with comparatively few cranes (at the moment) is the heavily urbanized County of Arlington, immediately across the river from the District in Virginia.

It’s not that Arlington County is struggling; quite the opposite. Its powerful skyline famously surpasses that of Washington, DC, since the national capital’s stringent height limitations prevent the construction of anything more than mid-rises. Lacking those restrictions, Arlington absorbed much of the demand for office space in the region, developing a skyline of its own by the middle of the 20th century, particularly noticeable in the Rosslyn district (easily accessible by the DC Metro’s Orange Line and Silver Line) in the hyperlinked image above. The Rosslyn neighborhood of Arlington might not boast so many construction cranes, but that’s only because its business district is quite mature by this point.

A mile to the west offers a slightly different scenario. 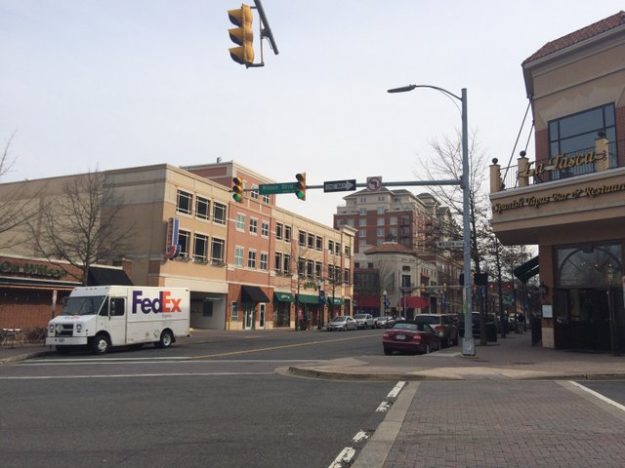 Essentially we encounter another downtown, this one generally referred to as Clarendon, largely after the Clarendon metro stop on the Orange Line (and, in more recent years, also the Silver Line) that forms its centerpiece–though, the arterial Clarendon Boulevard (is undoubtedly the source of metro station’s name).  As manifested by the photo above, most of the construction doesn’t look all that old. And it isn’t: as the Rosslyn neighborhood (and the land around the Rosslyn metro stop) began to achieve relative build-out, the demand surged at the next station on the line (called Courthouse), then the one after that (Clarendon). Authorities in Arlington County conspicuously relaxed height and density limitations in zoning laws, to help meet a burgeoning demand for housing and office space near the Metro stops, resulting in some patently visible Transit Oriented Development (TOD). This practice continues with additional metro stops to the south and west, so that the skyline of Arlington County claims a ribbon of explosive density…far more than simply the “urban village” of Rosslyn, visible while crossing the Potomac. This Wikipedia photo for Arlington County effectively demonstrates the serpentine path of high-rises, as they largely parallel the path of the DC subway and heavy-rail train system.  It’s that Orange Line once again.

But these dense, consciously planned “urban villages” remain a work in progress. Returning to the land near the above photo, it’s clear that the Clarendon stop on the Orange Line has not yet achieved full build-out. How do we know? Take a look at this: 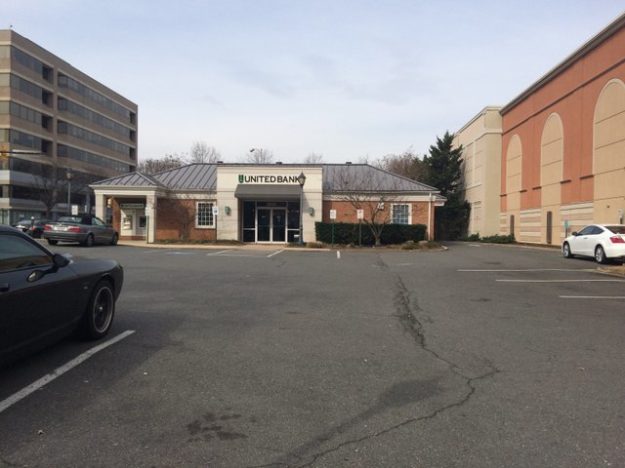 It’s a run-of-the-mill bank, like you’d see at pretty much any major arterial in America. It has multiple entrances and exits, about a dozen off-street spaces, a 24-hour outdoor ATM…you name it. Amazingly, it doesn’t seem to offer drive-through banking. But it’s got all the amenities you’d expect from a bank in the suburbs. And while, technically, Arlington is a suburb to Washington DC, its aspirations are clearly urban. Just look at the land surrounding this bank. 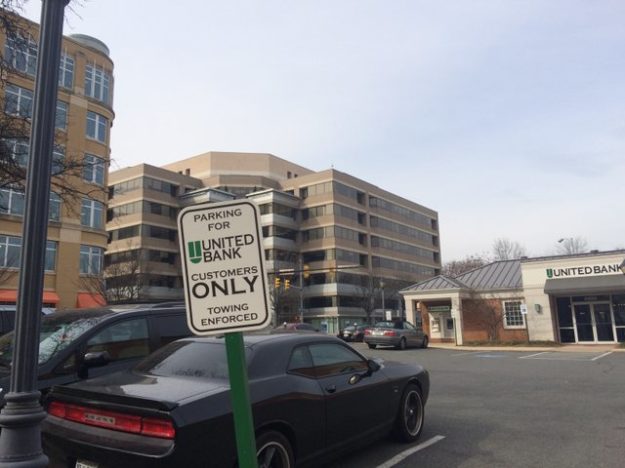 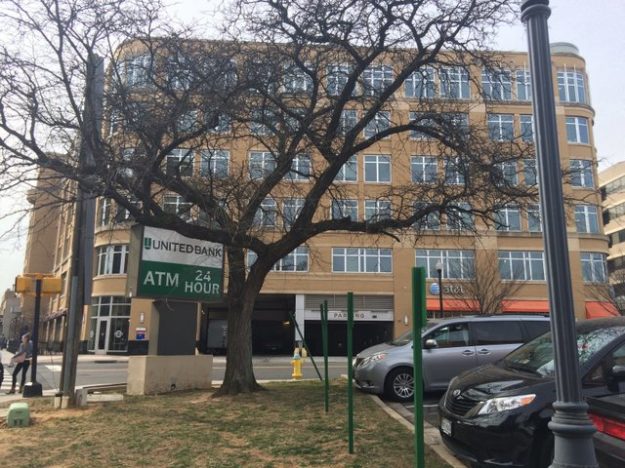 We witness an intense mix of offices, residences and retail, built all the way to the sidewalk, with a Floor-Area Ratio of 5.0 or greater. No visible off-street parking. And, on the opposite side of Clarendon Boulevard, it gets even more intense. 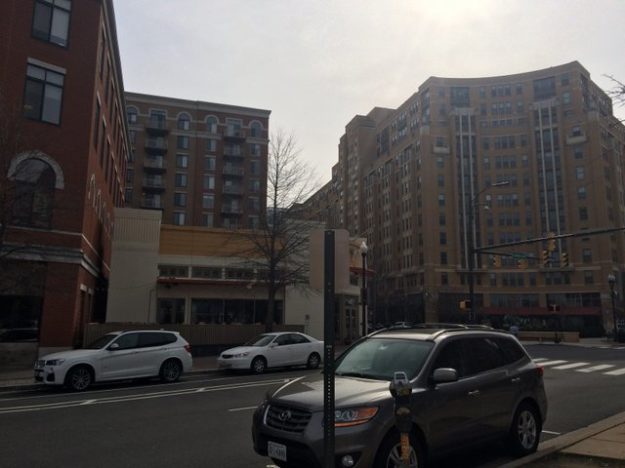 Kind of makes the United Bank seem humble. It’s the last corner to remain low-slung. Everything else within a five-minute walk of the Clarendon Metro Station has turned over to real estate investment interests, and a quick survey of this intersection through Google Street View, coupled with a sliding of the chronology bar, shows that at least two of the four corners underwent a transformation to a higher and better use within the last eight or nine years.

Modest though it may appear, the owners of this United Bank property—whether it’s the bank itself or an outside investor—are sitting on a gold mine, and they know it. Banks are typically stable industries with high profit margins. They make desirable tenants and are far less likely to close than, say, a nightclub. It’s possible that, for the time being, the landowner here is generating more than enough revenue through the bank’s operations to pay off any hefty property or real estate taxes. But, since land values around the Clarendon metro stop and the Orange Line are likely only to increase—and we’re a block away from the station right here—how much longer can the owners justify such a low-intensity use? Smart speculators will sell right before a recession, so that the new owner can raze the bank, tear up the parking lot, then build anew at six or more stories, featuring an office or apartment building, underground parking, and restaurants on the first floor. It’s obvious this is what happened to the land immediately abutting Union Bank; here’s the back side of the adjacent use. 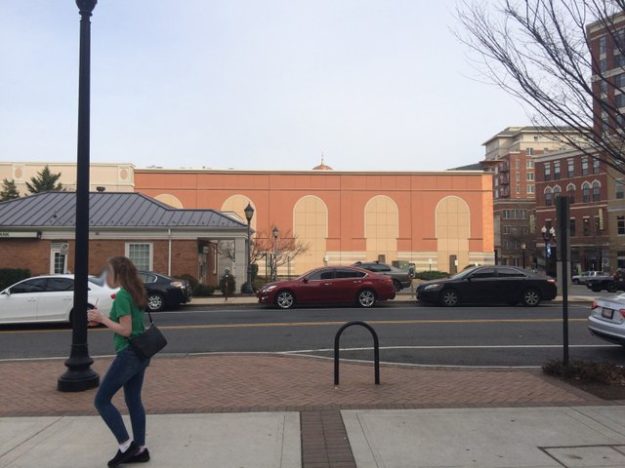 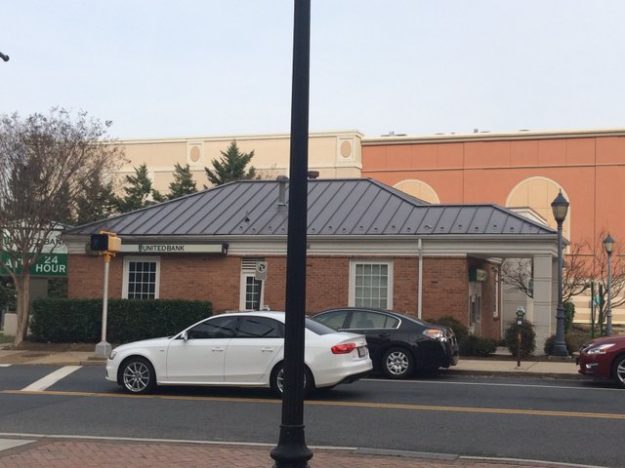 The developers of the adjacent parcel allowed a big blank wall on that side of their building, probably because they knew that, in due time, a far bigger use than a suburban bank would occupy the tract next to them, thereby concealing the blank wall.  Now here’s the front of those buildings with the exposed side wall: 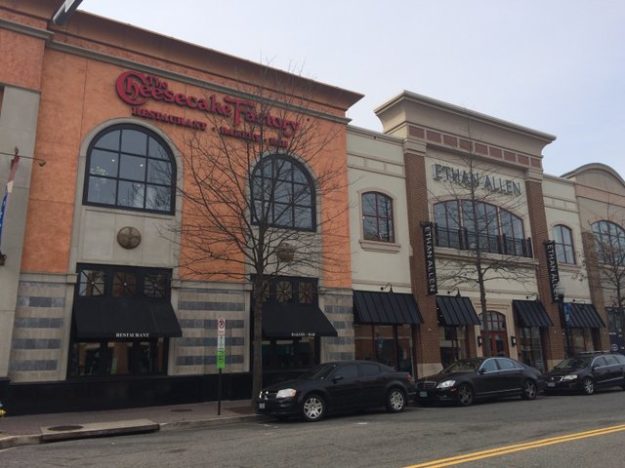 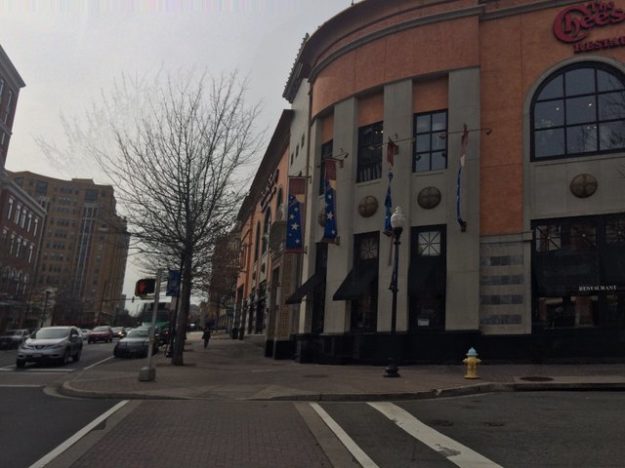 Pretty fancy stuff. And certainly a greater investment for a prominent corner property than a squat little bank.  However, at this point in time, local planners relegated the highest-intensity uses to Clarendon Boulevard itself, which is one-way eastbound and forms the proximal path of the Orange Line underneath. Its counterpart road, the westbound Wilson Boulevard just a block to the north, is visibly less intense. 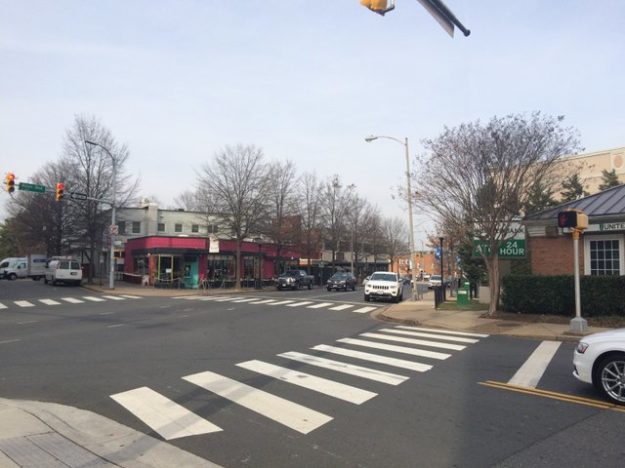 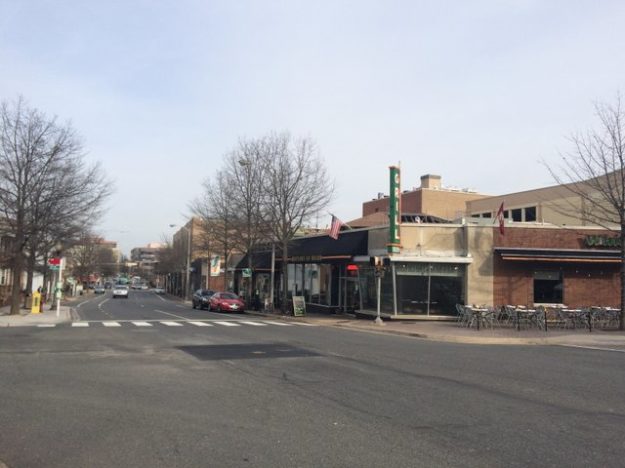 You can hardly tell it’s a major urban center, and you’d never guess there are 20-story buildings a block away.  For the time being, this stretch of Wilson has the character that I suspect was typical of Clarendon Boulevard twenty years ago—that is, the much lower intensity look and feel of the Union Bank. Whether it retains this look remains to be seen; without scrutinizing Arlington’s zoning ordinance, I’d suspect that planners preserved the lower intensity character visible here, out of the interest of the single-family detached dwellings that dominate the scene just a few hundred feet to the north. Even in urban settings like Clarendon, or Rosslyn, or the various other metro stops within Arlington, owners of detached homes generally remain averse to particularly high-intensity land developments right next door. 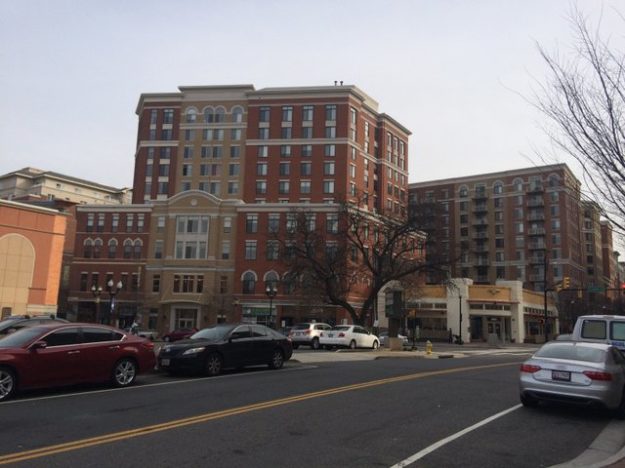 Arlington is a political oddity in almost every sense of the word. It’s a freestanding county originally intended to serve as the “Virginia side” of the District of Columbia, when initial plans for the national capital intended to carve out a perfect quadrilateral of 100 square miles across both sides of the Potomac. Virtually all development took place on the northern side of the river (ceded by Maryland), and the 1847 retrocession returned the 31 square miles to Virginia. It became Arlington County, the smallest self-governing county in the country, and, thanks to steady growth, one of the most densely populated. With the exception of some of the counties abutting New York City, Arlington may be the most consistently urban suburban area in the country. It wouldn’t have had such a skyline if it were a suburb to, say, Kansas City. In fact, those village centers would feature a lot more architecture akin to Union Bank.

No, Arlington got where it is thanks the metro’s intense growth of high-skilled workers, the stringent regulations on the DC side, a robust Metro system and the Orange Line, transit oriented development, and—most importantly—the human will to locate in high-density settings, atypical of most of American suburbia. The will to live in big multifamily developments goes hand-in-hand with the region’s economic prosperity: land costs are so high that many professionals have no choice, just as developers have no choice but to build up. Union Bank will most likely be gone within five years, replaced by another mammoth mixed-use building. While this won’t be great for people who bank at Union and love easy parking, chances are they’ll open another branch nearby…within walking distance of a metro stop.