Setting bounds for the bail bonds.

Imagine if you can that you’re in Frederick—Maryland’s second largest city (a distant second, after Baltimore). You’ve just passed through the resurgent downtown, where a variety of restaurants and specialty shops line Patrick Street, the primary east-west corridor. Now, as you make your way past the bustle, you encounter a few businesses that suggest a common theme. 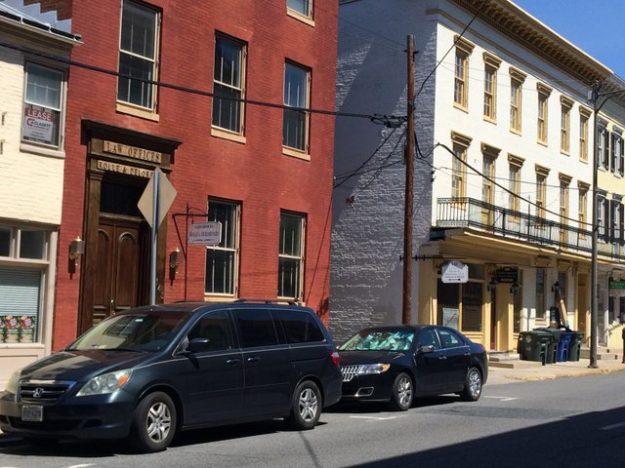 Can’t see what I’m getting at from that view? Try this one. 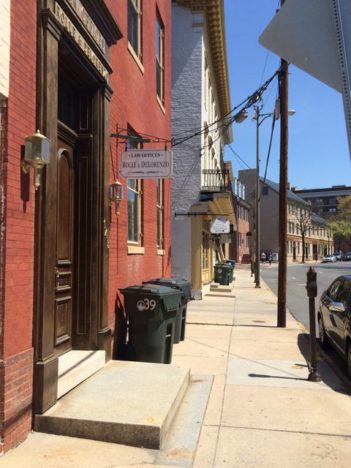 It’s a law firm in the foreground, and then the sign in the background indicates another firm with the arrow pointing to the left. And there’s more just down the street. 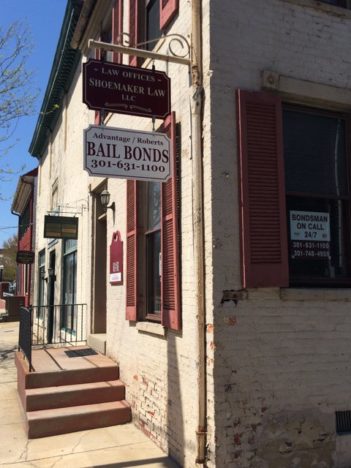 Right next to the law firm, as indicated on the hanging sign, is a bail bonds posting office. And across the street is more of the same: 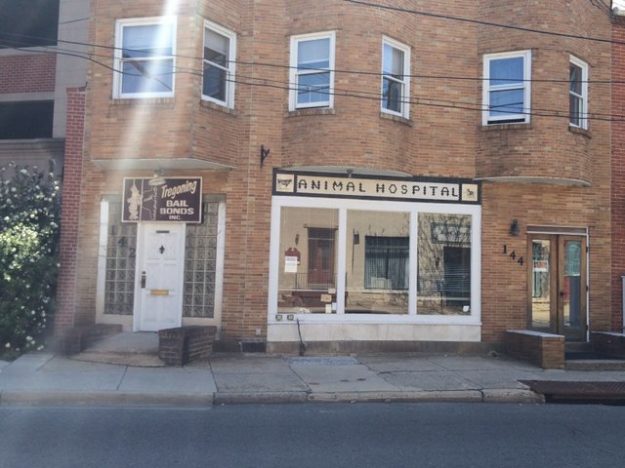 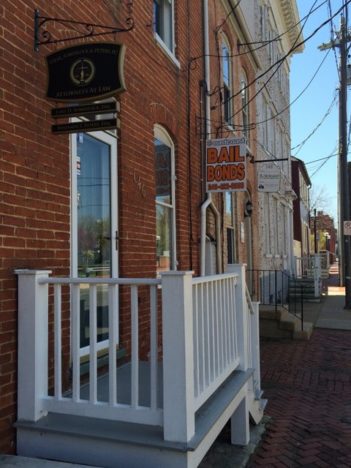 At first blush, it might seem like this is the sort of agglomeration of businesses intended to spur competitiveness, by placing multiple agencies offering the same service within an arm’s reach. And that might be true, to an extent. But that’s complicated. The likely reality, as is often the case when we encounter a bunch of law firms and bail bonding services in close proximity, is that there’s a sentencing court nearby. And maybe even a jail. 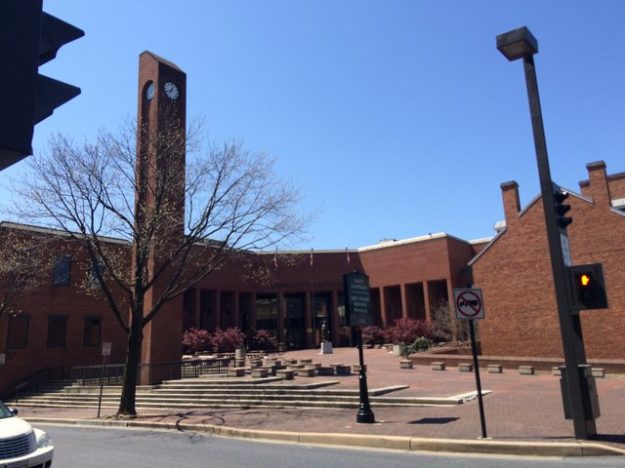 The above photo features the Frederick County Circuit Court, just a block to the east. State constitutions typically dictate exactly what functions take place within a county courthouse, and in Maryland the Office of the Clerk of the Circuit Court (according to the website) “files, processes and maintains civil, criminal and juvenile actions”, among many other things, for a county of nearly a quarter million people.

While the activities within a courthouse can vary greatly across the country, their configuration—how they relate spatially to the county that surrounds them—is more or less the same. Generally speaking, a courthouse is in the county seat—the administrative center of that county—usually near the heart of town. Frederick is the seat for Frederick County, and the absolute center (the “0,0” of Frederick’s variant on the Cartesian coordinate system) is a block away, at the intersection of Patrick and Market streets. 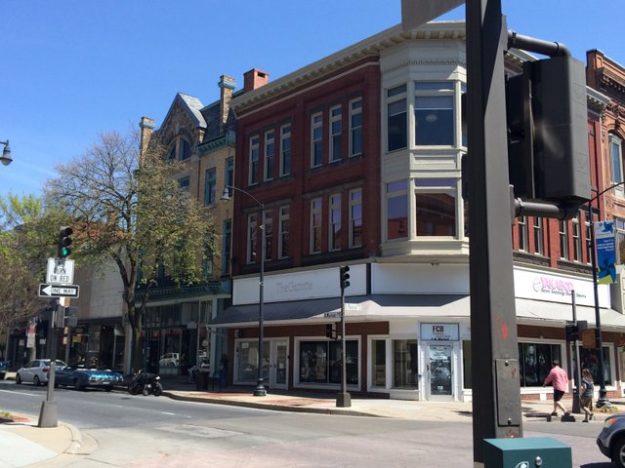 It’s a logical location for a courthouse, based on the historic organization of counties into the principal subunit of government for most states. County seats are typically the most populous and centrally located municipality within a county, making them the first resources for many rural-dwellers (who often live in otherwise unincorporated areas) to connect with the lowest tranche of government that represents them.

Decades (or even centuries) later, despite significant changes in the settlement patterns, the centrality of the courthouse remains logical, and, with few exceptions, we continue to expect them in the heart of our county seats, whether that seat is a 2,000-person town or a city of over 65,000. In smaller municipalities, the county courthouses often remain the most iconic building in the area: an impeccably maintained, monumental structure with a clock tower, presiding over the town square. Clearly we run into exceptions: the brutalist Delaware County Courthouse in Muncie, Indiana doesn’t exactly catch the eye, which I excoriated in a blog article a few years ago.  And judging from the photo above, the leadership in Frederick County replaced its courthouse with a modern incarnation in the 1970s, which contrasts sharply from the Queen Anne rowhomes nearby. But I’d wager that the reconstructed courthouse remains at the original courthouse site, right in the middle of it all.

Say what you like about the architecture to the Frederick County Circuit Court, it seems to avoid the pitfall that many county seats suffer, in terms of how their courthouse engages with the rest of downtown. And we see it with all those bail bond services and law firms. Across much of the country, as the commercial function of downtowns or main streets declined, those former storefronts struggled to find viable tenants to replace the clothiers or five-and-dimes. If a building was to remain viable, it needed something to occupy the empty space, and, much of the time, the ancillary services to a courthouse were all that remained: that is, legal assistance or the issuance of bail, among other things. As a result, legal services overwhelm the commercial space in less vibrant of our county seats. For example, the attractive but moribund town center of Chillicothe, Ohio (south of Columbus) has little else going on in those fine old buildings—nothing more than bail bonds, defense attorneys or non-profits serving those who need emergency legal advice. Obviously these tenants are better than none at all, but they significantly hinder a downtown’s capacity to serve a diverse base: downtown becomes a repository for services directly tethered to that courthouse.

So, how can communities leap this hurdle? Frederick provides a perfect example. The historically retail-oriented portion of Patrick Street, just to the east of the courthouse, retains its identity as a hub for downtown-oriented commerce. 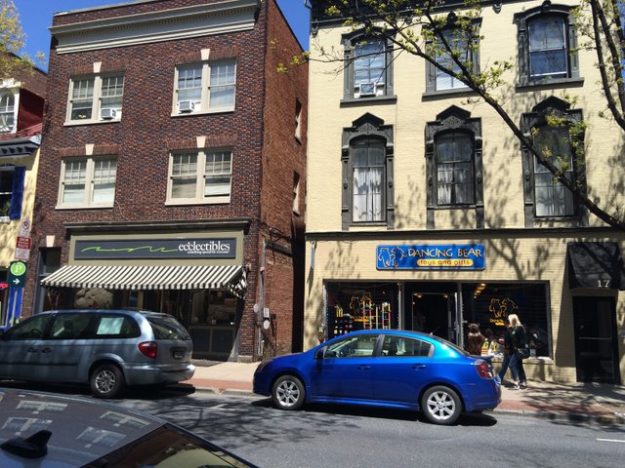 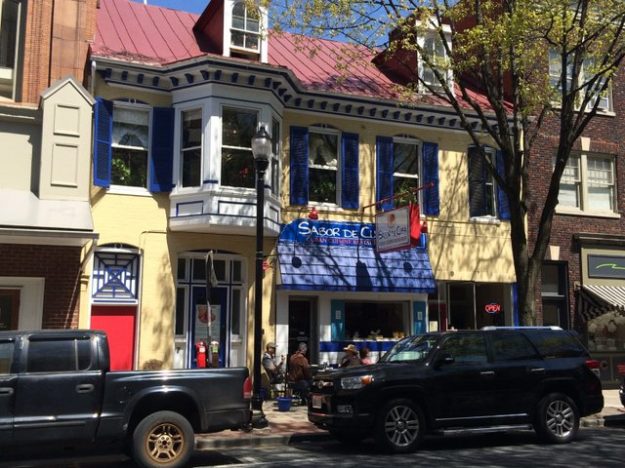 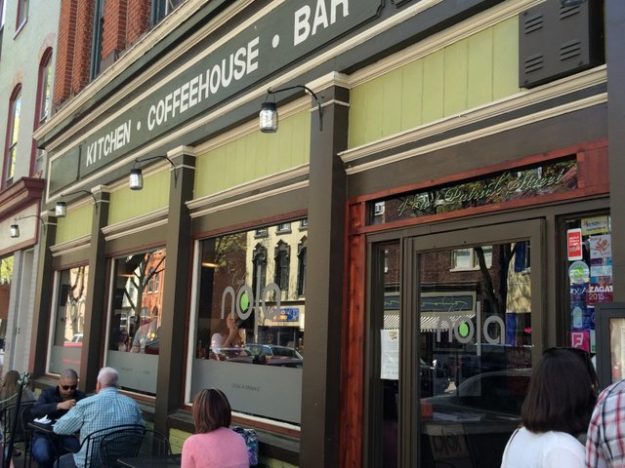 Notice the expansive first-floor windows to these buildings. These structures always intended to display the goods or services of their respective businesses to passers-by. What previously housed suits and skirts today most likely harbors restaurants, coffee shops and distilleries, but such is a product of the times. Beyond that, these structures generally appear to operate at their highest and best uses.

A few blocks to the west—still along Patrick Street but the other side of the courthouse—the architecture changes significantly. 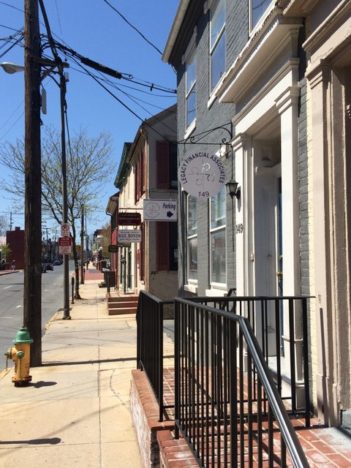 Conventional storefront fenestration is sporadic. Most of the structures appear to be residential in nature…except they aren’t residences any more. They’re law firms and bail bonding offices.  No parked cars or pedestrian activity on this portion of Patrick Street, but that’s only natural; none of the offices are open on weekends.  These exclusively service-oriented uses, which don’t depend on merchandise or flashy signage to catch the eye, can operate just as effectively in converted homes, which is exactly what they’re doing here in Frederick.

It’s possible that the advocates who have helped turn Frederick’s downtown into a lively place had a hand in all of this. Some municipalities have actually imposed regulations that make it far more difficult for service-oriented uses (law firms, accounting, real estate, engineering, etc.) to occupy historic storefronts, thereby forcing traditional storefronts to host retail rather than office uses. But I doubt this regulation ever existed in Frederick. In those bygone years, when most historic downtowns rolled up their sidewalks after hours, I’d imagine property owners fought such regulations tooth and nail. They were typically happy to get whatever tenant they could find. These days, cities like Frederick hardly need to steer tenants to the right buildings. The market is taking care of it for them. Frederick probably owes its revitalization just as much to municipally driven initiatives as to its strategic location: 45 miles northwest of Washington DC, it has morphed from a freestanding small city to an important bedroom community, tripling in population since 1970. To this day, it offers an attractive setting with (comparatively) cheap real estate to a bevy of well-heeled federal employees, within an hour’s commute. 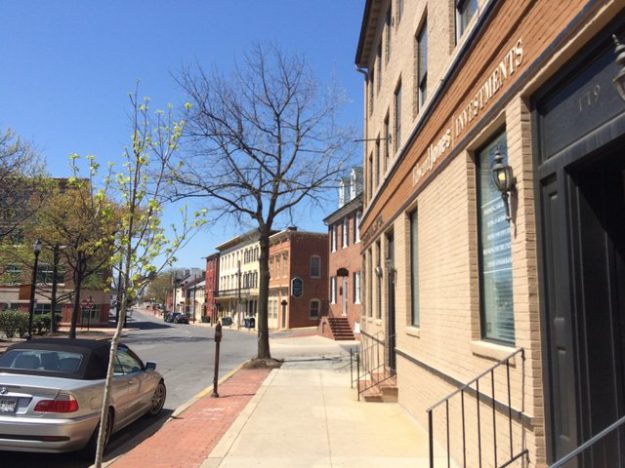 I wouldn’t be surprised if the Frederick of 1987 harbored bail bonds, law offices and other “boring” uses in those great commercial buildings on East Patrick Street, so that those expansive windows looked into desks and IBM computers. Much of a time, the curtains to those windows would remain fully drawn. And nary a soul walked those sidewalks on weekend afternoons. As downtown became attractive again through the 90s and 00s, the attorneys didn’t need that expensive retail space and moved into the converted homes a few blocks away. And, on a sunny Sunday in April, the commercial heart of Frederick is popping.

PrevLifestyle centers: with Saucon Valley, neither lively nor stylish.
Undone by the dome.Next

8 thoughts on “Setting bounds for the bail bonds.”