A brand doesn’t evolve through natural selection; it takes hammers, pliers and a new coat of paint.

After an article as lengthy as the one I just completed for Urban Indy, I need a breather, both intellectually and in terms of the time commitment. Every now and then I can’t help myself but to scrutinize the implications of certain brands and logos—how these offer clues on how the affiliated enterprise wants us to interpret the landscape, and where this company fits in to it all. I’ve pondered multiple times in the past on Quiznos, a briefly hugely successful sandwich chain that, among other things, spread its franchises too thinly in too short of a time. By the time of the great recession, few if any were profitable, and they closed nearly all locations outside of those in the Mountain Time Zone. Nearly a decade after its peak, Quiznos is starting to fade to a distant memory for most of us living east of the Mississippi, where it generally seems relegated to gas stations and refreshment plazas along toll roads. That didn’t stop me from covering the Quiznos brand, from an early iteration of an abandoned storefront in Detroit (before they went super-big) to a leftover Q-shaped neon sign, appropriated by a completely unrelated mom-and-pop restaurant owner (who probably purchased it at auction).

These days, it’s probably easier to find a black-footed ferret than a Quiznos location (even in Quiznos’ native habitat), so I’ve migrated over to another, more successful Q restaurant. 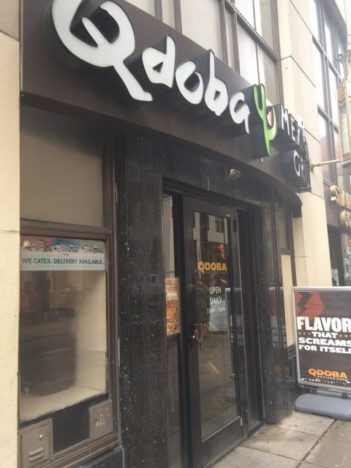 The fast-casual burrito chain is faring quite well, capitalizing on recent vulnerabilities of the industry leader Chipotle, all while giving itself a considerable makeover to lure some of Chipotle’s design-savvy clientele. Qdoba’s great push for burrito supremacy culminated in a significant rebranding, which I covered a few months ago when I first witnessed this look in a yet-to-open location in downtown Newark.

What about the ecosystem for the latest spotting? Center City Philadelphia—a heavily-traveled stretch of Walnut Street in Rittenhouse Square, the primary downtown artery for high-end, nationally recognized brands. And the logo featured above is the old logo—the “suburban” look that usually lured visitors to a variety of pseudo-Mexican tchotchkes inside. So why did the parent corporation adopted the hip new bold-caps design for struggling downtown Newark, but opted out of these changes for high-value district in Philly? They’re taking their time. But take a look at the decals on the entrance door: 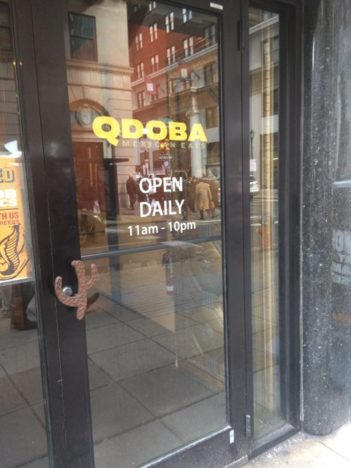 Here in Philly, we still see the “industrial chic” lettering we found at the Newark location. And the interior? 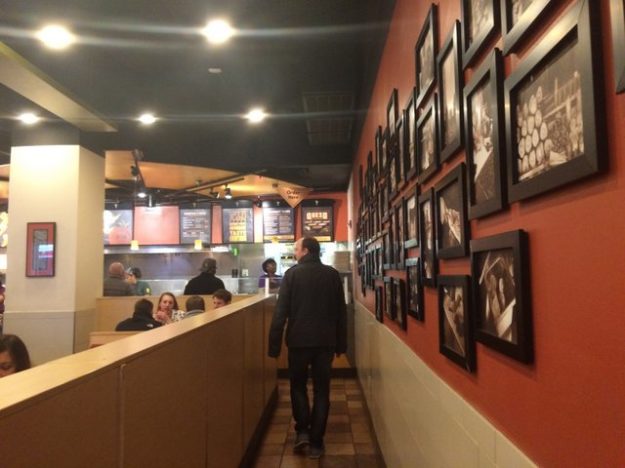 None of those sombreros or maracas. Instead we get literary magazine styled photography, a basic color palette and a careful attention to that bold lettering on the menu display.

What we witness here is, quite simply, a brand still in the full throes of its transition, which helps convey to the world the broader impacts of intellectual property used in marketing. For major corporate chains, the Qdoba branding details have become so entrenched that they almost serve as infrastructure. Case in point: the signature cactus handle to the door. 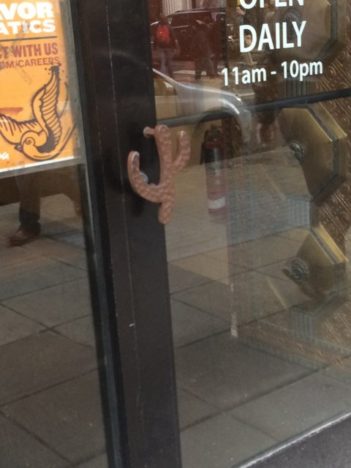 It’s a distinct look, and the same cactus has long separated the restaurant’s name (Qdoba) from its descriptor (Mexican Grill), as seen on the outdoor sign at this Philly location: 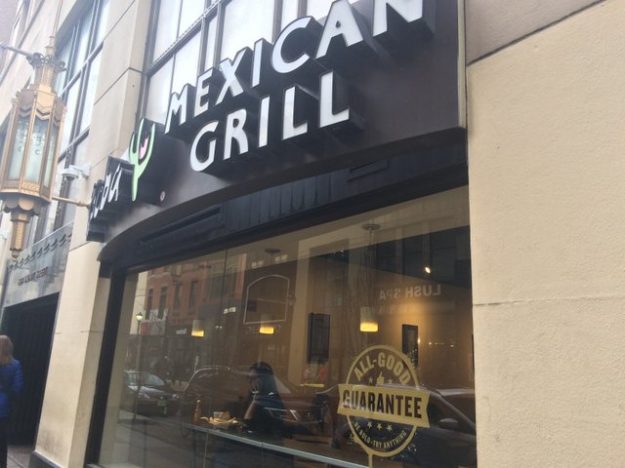 In a matter of months, I suspect, the cactus will be a thing of the past. Check out the current website for Qdoba (now subtitled “Mexican eats”) and there’s not a cactus to be seen. No surprise, really: a website is probably a comparatively less labor-intensive process to change, and it becomes ubiquitous once the programmers have uploaded all those new details. The information superhighway is probably the most cost-efficient means of rolling out of the new Qdoba branding.

The last things to morph—long after the outdoor signage—are the subtlest. It may be years before the Qdoba home office orders changes to the doorknob at this high-profile location, if it ever does. Far more critical are the most overt means of revealing to the consumer base that Qdoba 1) has changed its ethos; 2) its new ethos is just as (if not more) appealing than before; 3) this change should allow it to pick up quite a few new regular customers. Obviously, signage comes first. The other stuff is clever and subliminal, but replacing it would not likely yield as much of a return.

Still, I suspect that, if the current rebranding succeeds, in a matter of time Qdoba branding will include replacement of the cactus handle, maybe with a big fat Q, since that seems to be the new icon. Whatever happens, let’s hope they’re a bit more successful at deploying the Q to their advantage than that other fast-food company that shall not be named…

5 thoughts on “A brand doesn’t evolve through natural selection; it takes hammers, pliers and a new coat of paint.”