A church can locate anywhere…like a circle fits in a square.

Along a popular entertainment and restaurant corridor in downtown Indianapolis stands a community theatre building, known as Theatre on the Square (TOTS). At first blush, it might seem baffling how it got that name, since it isn’t on a square. (And, in fact, since its street address is Massachusetts Avenue, a diagonal street that radiates outward at a 45-degree angle from the rest of the grid, it’s more of a Theater on the Hypotenuse. But, as the website tells us, it originally began in another Indy neighborhood, Fountain Square, and it wisely kept the catchier name.) Regardless, it offers a pedestrian-friendly storefront, fairly typical for the neighborhood. 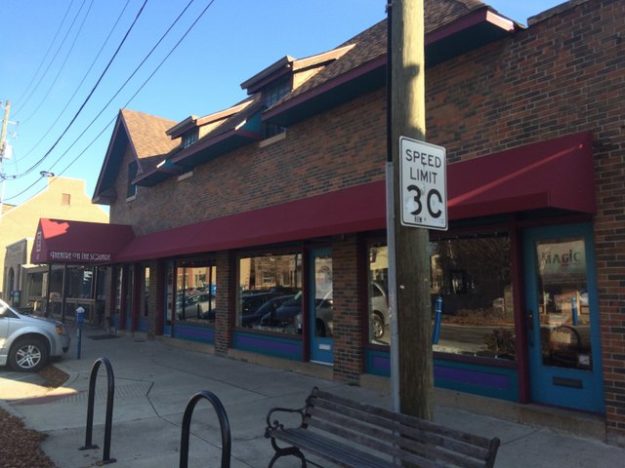 But one of the glass doors features an unusual poster. See it?

Obviously it doesn’t hurt to get closer. 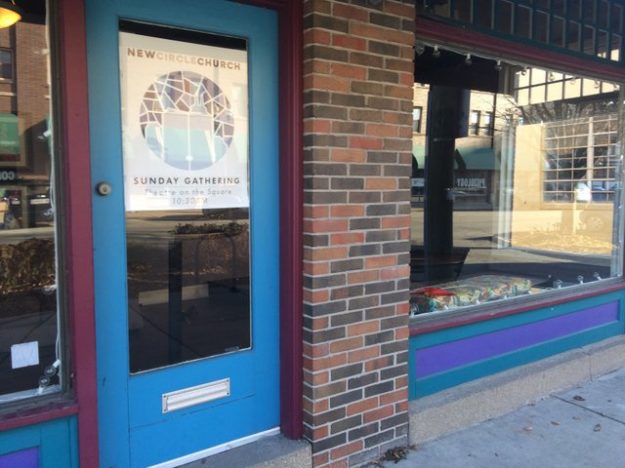 It’s an advertisement for New Circle Church, which apparently uses the space on Sunday mornings. But why would a church use a theatre building? It only seems odd if you haven’t been initiated to the post-modern religious landscape, where churches increasingly form and grow while completely untethered from, well, churches (or at least church buildings). I blog about this periodically, whether a church in a first-floor storefront along the main street to a small city near the Poconos or, more recently, a church that leases space from a senior center in South Philly. In many regards, these are the counterparts to the understandably higher-profile megachurches. While the latter need stoplights and crossing guards to manage their Sunday morning traffic, not to mention the regular bustle during the weekdays from visitors to their coffeeshops, health clubs and Zumba classes, the former—the microchurches—don’t even need a building of their own.

Therefore, we witness this seemingly unlikely pairing at the Theatre on the Square…which may, in turn, not be so unusual after all. After all, if a church is just getting started, it doesn’t necessarily need—and possibly cannot afford—its own bricks and mortar. It’s probable that some of the largest and most prominent megachurches (even from a national standpoint) began as something out of a low-key strip mall, or even a residential basement. And, the alliance with a theater most likely fits like a hand in glove: by leasing (or sub-leasing) to this tenant, the theatre company gets some added revenue, and the church only needs the space on Sunday mornings, a time when few people are attending plays. And the physicality of a proscenium largely parallels that of a chapel, with a clear stage space for a pulpit and choir or praise and worship band. 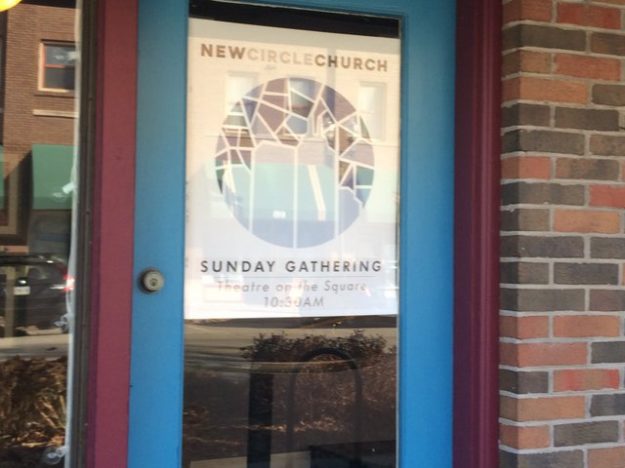 It’s a “Sunday Gathering”, not an actual service. And New Circle Church—as evidenced by its smart website–is hardly scrappy: the church has multiple ministries and a staff/team of six. Maybe not gargantuan, but certainly more involved than someone’s basement. And it does seem to claim a permanent address outside of the theatre: not a church building, but a private residence on East 30th Street, a still rough but gradually improving neighborhood known as Mapleton. Here’s the home office of New Circle Church.  And if you zoom in, you can just barely make out the familiar logo in the window.  And here’s how this home looked a couple years ago, most likely vacated/foreclosed during the peak of the recession.  So the planters of this church renovated a home to use as the sanctuary; perhaps it doubles as the residence for the chief pastor, making it a home church after all. But the polish of the website and the scale of the ministry suggests the church isn’t completely lacking in capital.

A further review of the New Circle Church website indicates its affiliation with the North American Mission Board, which declares a primary goal of “mobilizing Southern Baptists as a missional force to impact North America with the gospel of Jesus Chris through evangelism and church planting”. A growing trend among select Evangelical churches is to avoid the middle-class suburbs where the demographic support might be stronger, but to seek locations in economically distressed areas for these planted churches, where they can engage in outreach to the surrounding community within walking distance. Concomitant with this goal is to work with the already affiliated: the Southern Baptist Convention does not have great representation in metro Indianapolis and particularly, I suspect, in the near North Side of town. But the much-coveted millennials will still show up, since they tend to be far less scared away by areas like East 30th Street than their parents might be.

These alliances now make a little more sense, but they still don’t entirely explain the agreement between New Circle Church and Theatre on the Square. 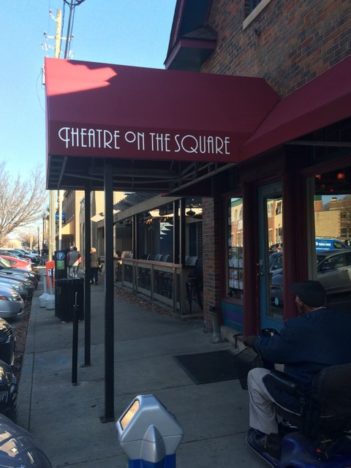 After all, TOTS has long featured off-off Broadway shows, often appropriately described as “irreverent”, routinely targeting the areas LGBTQ community. The Southern Baptist Convention is hardly known for its support for gay rights, or generally for approving of the sort of seasonal line-up that TOTS offers. Either I’m drawing unfair stereotypical conclusions of both of these organizations, or there’s something else to the partnership. Or perhaps not: the TOTS website makes no reference to New Circle Church, and, if the commitment can terminate as easily as removing a poster from a window, then it can get uprooted—and regrow—like any household plant…or a church plant, for that matter.

23 thoughts on “A church can locate anywhere…like a circle fits in a square.”