Any visitor who stumbles upon the main street of Bethlehem—the second largest city in Pennsylvania’s Lehigh Valley—is likely to presume or speculate that it’s a prosperous town. And, in most respects, it is: well-maintained streetscapes with sidewalks of brick and slate; an mix of old and new buildings, most of which are in excellent condition; a colonial-era industrial quarter (that recently achieved Department of Interior’s prestigious National Historic Landmark status); smartly situated green space; and a few obvious institutions in the form of the Central Moravian Church and Hotel Bethlehem. 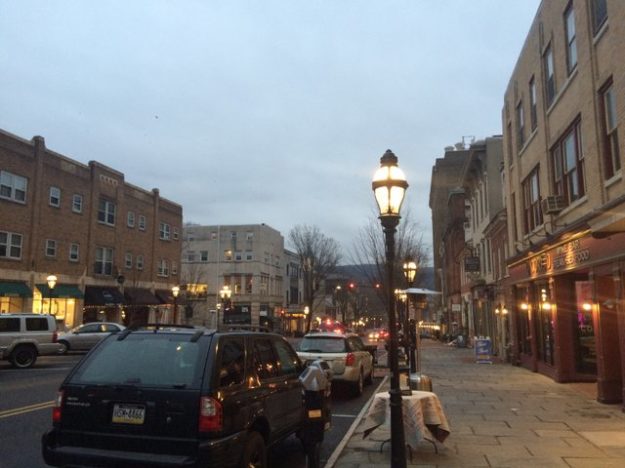 And Bethlehem’s Main Street is up against some fairly stiff competition: not only must it contend with the central business districts of Allentown and Easton, the Lehigh Valley’s other two nearby cities, but it has a separate urban commercial corridor across the Lehigh River in South Bethlehem, as well as the shops and specialty services in Steel Stacks, the reviving former campus of the long-running (but now defunct) Bethlehem Steel corporation. 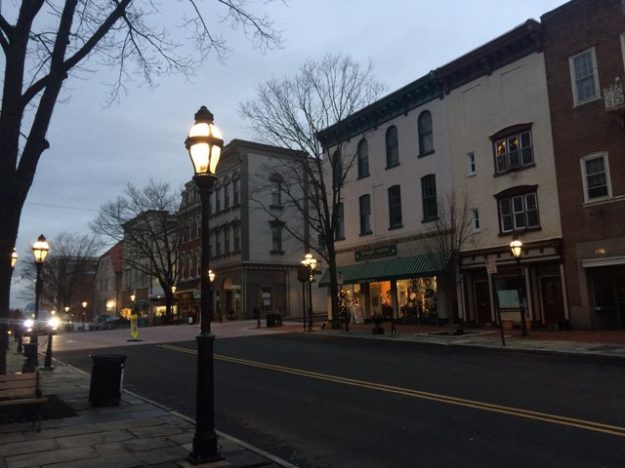 For Main Street Bethlehem to prevail with a variety of stores featuring mid- to upper-middle income restaurants, distinctive services, home furnishings, art galleries, a place literally called The Foo Foo Shoppe, and the nation’s longest continually operating bookstore, it must be doing quite a few things right. Nonetheless, squarely in the middle of its most flourishing continuous four blocks, we encounter a big fat vacancy. 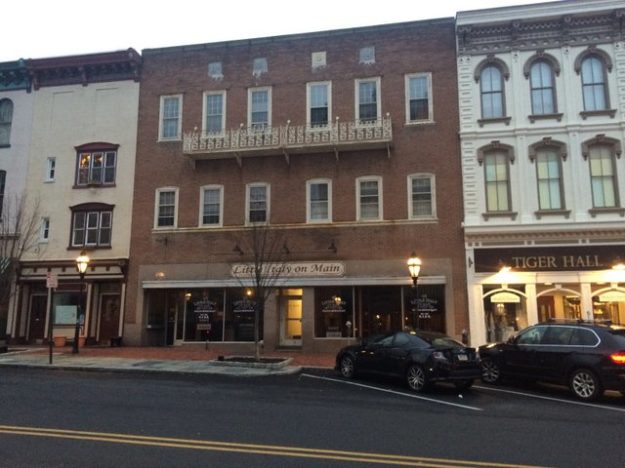 It really shouldn’t be that big of a deal, since tenants come and go all the time, even in the most successful commercial districts. But Little Italy on Main apparently didn’t stick around for long: as recently as the summer of 2011, the space hosted another tenant. And, while the restaurant was still operational when I arrived to the region in the spring of 2014, by the fall of that year it was closed.

It’s been sitting vacant ever since, which means we’re approaching two-and-a-half years. Yet all around it are successful establishments. What’s the deal with this place? Obviously, without investigating on a topic with which the owners are not too likely to divulge, I can only speculate, and speculate I will. 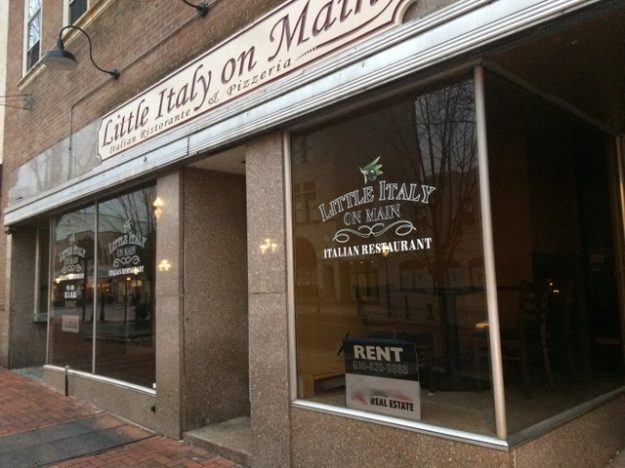 This placard has sat into the window for the better part of two years. It’s unfair for me to bring this name into consideration, because, in all likelihood, the real estate broker and his team are doing the best they can at marketing the space to attract a new tenant. If they were as unsuccessful as it would seem, one might expect the property owner to find someone with a greater understanding of a specialty, boutique main street market.

It probably didn’t help the fortunes of Little Italy on Main that the four-block commercial street already hosted two other Italian restaurants.  But surely this attractive space could find a restaurant tenant capable of carving its own niche.  Could the problem be the owners themselves? What if, even in a market with reasonably good foot traffic, the owner/manager is simply asking too much on the lease for this large property? Perhaps there are other strings attached? The Little Italy on Main restaurant used to spread across two separate “chambers”, if you will. It may be that no one is willing to take on the entire large space, but the owners are unwilling to subdivide. Deed restrictions may even keep the various parties’ hands tied.

Still, one would think that, after enough time, the owner would want to cut his or her losses and just secure a tenant, even if it means lowering the lease rates.  After all, throughout its inactivity, the property would still generate carrying costs, and such long-term vacancy on the first floor would obviously compromise the building’s revenue.  Do we know what those carrying costs are?  Why would it ever pay off to speculate for so long?

Based on the visible conditions—an excellent property in a great location remaining vacant for such a long time—it is possible that the owner is paying property taxes at a rate far lower than the market value…or, at least, the value which the owner believes his or her parcel to hold, based on the prices he or she is seeking for that first floor retail/restaurant space. What if the owner is paying so little in property taxes that he/she can defray those carrying costs on the speculative prospect that, eventually, something big will come when the owner finally accepts that pricey lease? A misalignment between the assessed value and the owner’s asking price could foster an environment where a property with a presumably high value remains vacant for long periods of time. After all, if an owner is seeking a lease that suggests the property is worth X but the taxes come from an assessed value of .25X, the owner has far less of an incentive for rushing to secure an undervalued lease. (In such a case, it would take four years before the owner assumes a real loss aligned with the perceived value of the property.)

What I’m postulating here is obviously an oversimplification. I speculate again, but then, so is the owner of the property. The misalignment could come from the fact that the owners are overestimating the appeal of Main Street and asking for too much in an strip that already commands values well above the region’s median. It’s equally possible that the owners are paying taxes in keeping with the assessed value, but they are just absorbing a huge loss while seeking the optimal tenant. Or the building’s physical condition could pose problems that simply aren’t going to come to light. (A reduced leasing rate, however, should reflect those conditions.) But properties like this, which we see from time to time in hot commercial real estate markets, could serve as a red flag to the City that the parts aren’t adding up to a satisfactory whole. After more than two years, this vacancy is a black eye for Bethlehem’s main street, and it certainly can’t help the neighboring property owners, who undoubtedly seek more foot and vehicle traffic passing by their storefronts. 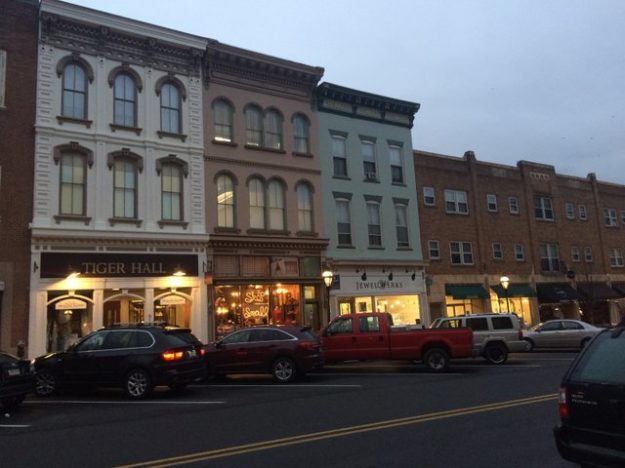 Then again, maybe Main Street isn’t living up to its full potential.  As good as it looks, there are weaknesses, particularly noticeable on the intersecting Broad Street.    I’ve heard murmurings that “it ain’t what it used to be”, where “used to be” is as recent as 2010, before it faced so much competition with the growing entertainment options at Steel Stacks in South Bethlehem. The market push to speculate may be stronger than ever, only because of mounting uncertainty in the strength of commercial corridors in general.  Chronic main street vacancy could have a variety of causes, but the end result benefits nobody, except the prospective tenant—which, in this case, appears once again to be nobody.

PrevA brand doesn’t evolve through natural selection; it takes hammers, pliers and a new coat of paint.
Looking for the Americana of yesteryear? Just visit your closest inner city.Next