Looking for the Americana of yesteryear? Just visit your closest inner city.

Throughout the densely populated central city neighborhoods of Allentown, bodegas punctuate the street corners. Much of the housing in the area predates widespread car ownership, so the rowhomes lack any space for a garage, a driveway, and—in many instances—anything more than a tiny garden plot. In other words, we encounter housing built right up to the lot line: 100% building coverage. Not even room to park a golf cart.

But working-class people in the Allentown of 1910 didn’t need cars: everything was so walkable and transit so good that they could do it all within a half-mile radius. So it goes without saying that the bodega at this particular street intersection comes from a much later time period than the houses immediately to the right of it. 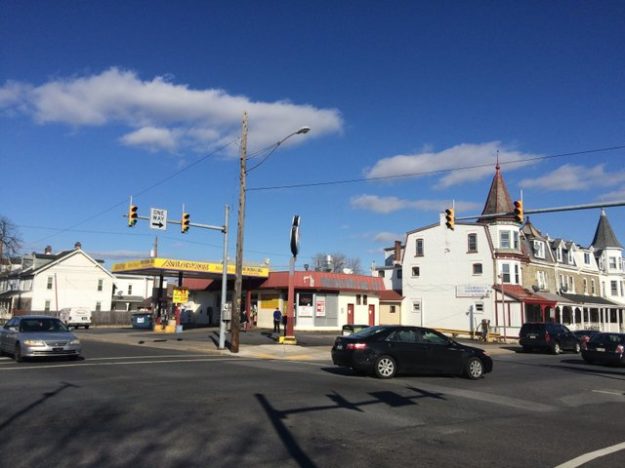 I reckon this corner once housed a mixed-use building with commercial on the lower floor and residences on the two stories above. As the city aged and this area fell into comparative neglect—and as automobile ownership increased dramatically—the landowners determined that they could get more profit by simply operating a gas/convenience center with parking and eliminating the housing element altogether. Instead of complete coverage, the replacement building only comprises about 25% of the parcel. Thus, we get A-1 Gas and mini-mart, with lots of parking. The legal parameters of the lot remain close to or even identical to what they were in a 1920 Sanborn map of the city; it’s the physical construction that rests atop that lot that has changed. We modify the details that matter, in keeping with the times.

But that’s not the only evidence we encounter at this site of a partially overwritten past. Shifting our stance thirty feet to the east, we can see another relic of a bygone era—at least for those of us who remember it. 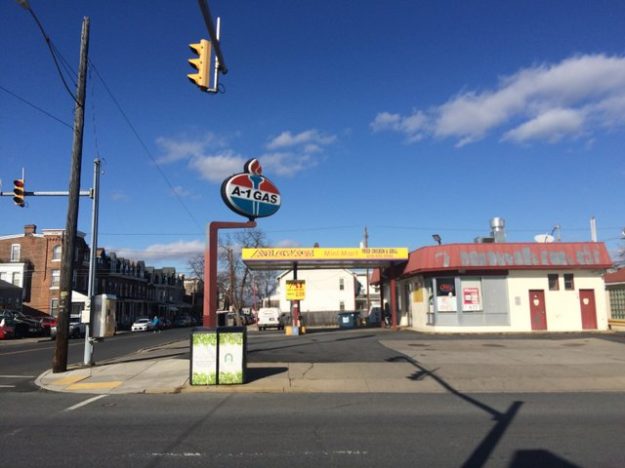 Yep, it’s that logo. Does it ring a bell? If you’re an American of legal voting age, you’ve probably seen it, even if you might not remember its origins.

It’s the old Amoco Corporation, which began as the Standard Oil Company of Whiting, Indiana in the late 19th century. Indiana Standard’s fortunes paralleled those of the automobile, expanding to become the largest domestic oil company by mid-century, a time when car ownership was intrinsic to achieving a middle-class way of life. And Amoco service centers spread themselves neatly and predictably across the motorscape, using this “Torch and Oval” combination on all the elevated sign poles, at least since 1946, after successive acquisitions helped place the Baltimore-based American Oil Company (and the Torch and Oval that it pioneered) under the Indiana Standard name.

For much of the mid-century, the torch and oval remained a remarkably consistent emblem, but the text within the white band changed, influenced both by geography and various other mergers. Some parts of the country used labels that aligned with the marketing subsidiaries; they might say “PAN AM” (after the Pan American Petroleum Corporation) or “UTOCO” (after the Utah Oil Refining Company), rather than “STANDARD” for Indiana Standard. With American Oil a wholly owned subsidiary by 1960, the word “AMERICAN” began appearing in the white band. Only in the 1970s did Indiana Standard fully embed the “AMOCO” name into its identity, when the logo featured above eventually dominated the national gas station landscape. Those of us who grew up in the 1980s and 1990s could identify not just the torch and oval but the tri-color stripes on a black background that reinforced every Amoco gas station canopy, like the one in this old photo.

Today it’s an icon we rarely see. In 1998, Indiana Standard/Amoco merged with British Petroleum (BP), and, within six years, the new parent company had nearly completely eliminated the Amoco logo, replacing it with the yellow-green motif long associated with BP (previously as a shield, but, concomitant with the Amoco phase-out, the BP brand shifted to the omnipresent sunburst). By the mid-2000s, the sunburst was as ubiquitous as the Amoco logo once had been. If we encounter the Torch and Oval at a service station today, it probably belongs to an operator who broke free from franchising obligations, and the parent company never pursued legal action. Case in point: A-1 Gas in Allentown. 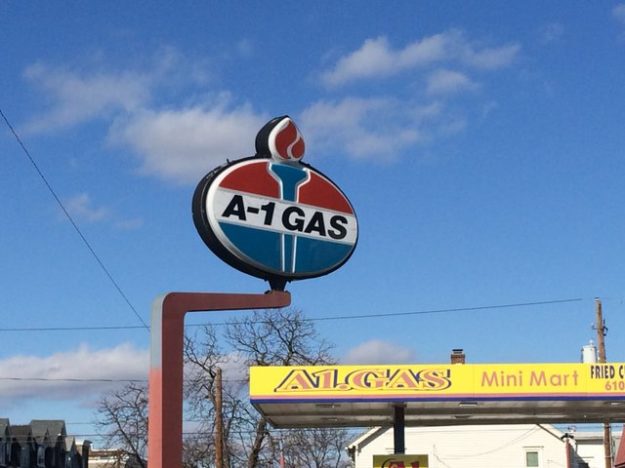 In all likelihood, the entrepreneur who runs this gas/convenience outfit kept the sign from an Amoco that shuttered around or before 2004. He or she bleached out the “Amoco” lettering and replaced it with the new name. Simple as that. Even though the Amoco logo no longer serves a viable promotional purpose, it remains the intellectual property of BP. But BP probably shuttered this operation because the economically challenged neighborhood didn’t incur enough benefits or revenue, then divested the property, releasing the franchisee of obligations. And the written-over consequences are clear for all passers-by: “Look! It must have been an Amoco station once.” 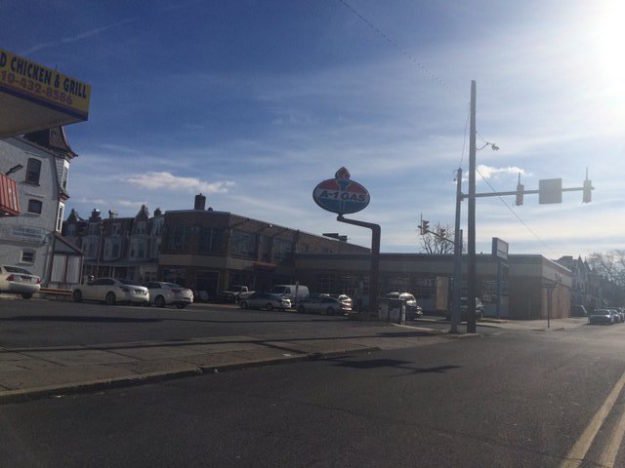 (Incidentally, in the wake of the 2010 Deepwater Horizon oil spill and the ensuring controversy, BP briefly contemplated reverting the emblem on its marquees back to the old familiar Amoco logo.)

The evolution of commerce can help us in urban archaeology; we can gauge more accurately what the physical form at a given location might have been 25, 50 or even 100 years ago. The shifting of brands, cultural preferences and the ensuing use of lands results in the new replacing or overwriting the old. Naturally. But if social change were absolute, with a complete elimination of vestiges from the past, we’d never know what got replaced. Thus, we require a baseline from which to build our judgments—and that baseline involves the modest, telltale cues: what got overlooked among the sweeping physical changes induced by widespread preferential shifts. The white of the canvas that peeks through under all that paint. And here it is, in the form of a half-changed Amoco sign.

Incidentally, across the street at this same intersection, we encounter another auto-oriented business with almost the same vintage. 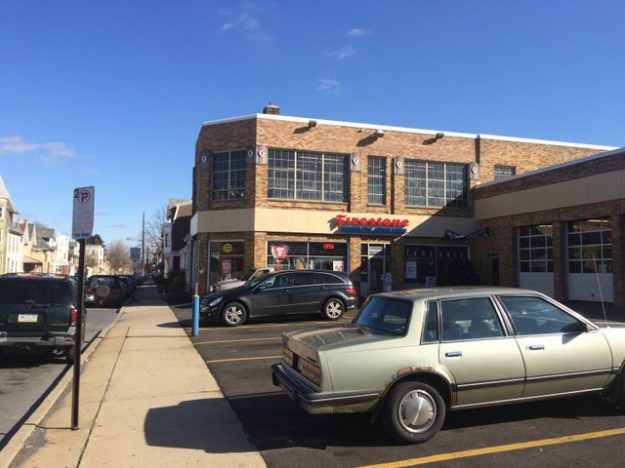 Like Indiana Standard/Amoco, Firestone dates from the turn of the 20th century, historically recognized through the tires manufactured in Akron, particularly for the Ford Motor Company. By the 1920s (when automobile ownership fused itself with middle-class American identity) the company began opening what proved to be a hugely successful network of auto care stores, which understandably featured Firestone tires. Also like Amoco, a competitor bought the company near the end of the century. However, Japan-based Bridgestone’s 1988 purchase salvaged both the Firestone name and brand, despite both suffering heavily from scandals caused by defective tires—and their recall—in the late 1970s. As anyone knows, Firestone Complete Auto Care remains a predictable presence throughout American cities of varying sizes, often located in or immediately adjacent to downtowns. The logo, though less bold or striking than Indiana Standard/Amoco, has remained virtually unchanged over the years.

Elsewhere in Allentown, in the rapidly redeveloping downtown, we encounter one more relic from a bygone era, but this one is likely a complete head-scratcher for the Millennials. 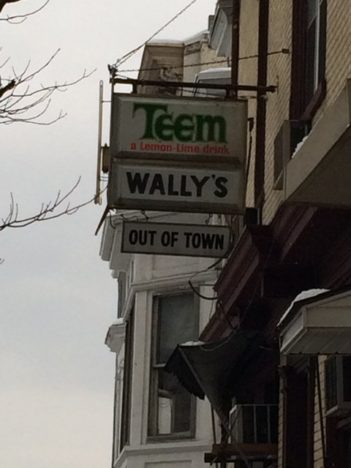 At the top of this aging sign for Wally’s News is the logo for Teem, Pepsi-Cola’s original lemon-lime counterpart to 7Up and Coca-Cola’s Sprite. At its peak in the 1970s, it never really competed successfully, and eventually Pepsi discontinued it, replacing it with first Slice, then Sierra Mist. While the occasional soda fountain and vending machine dispensed the drink up through the 1990s, the brand lost any real market viability after its discontinuance in 1984. This Allentown photo dates from January of 2015. 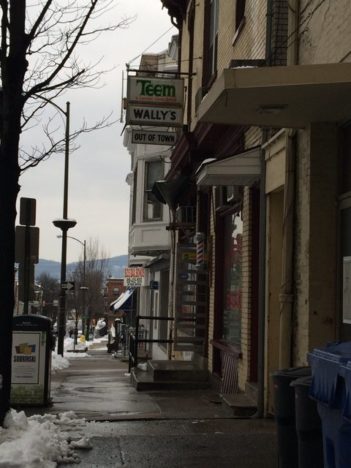 Much like the faded, old-school Quiznos sign in downtown Detroit that I blogged about several years ago, the presence of a Teem logo 30 years after the brand tanked offers strong indication of downtown Allentown’s economic malaise.   If the city had enjoyed considerable investment over the years, we would never spot a Teem sign in 2015. Fortunately for the City of Allentown (less so for vintage cola aficionados), considerable redevelopment has since resulted in the removal of the Teem sign…and the building that supported it, the adjacent building, and most of the others on that block. All to be replaced with a mixed-use high-end commercial/residential structure. Hope someone even nerdier than me saved the Teem sign from the scrapheap.

5 thoughts on “Looking for the Americana of yesteryear? Just visit your closest inner city.”