Residential infill development can—and often does—fail to integrate architecturally with the neighborhood that surrounds it. And that’s okay. Far more important than adherence to a certain vernacular is the physical form of the house. When looking at the front of the home square-on, does the layout emphasize a front door, a porch, a garage, or none of the above? Where and how does it sit upon its parcel? Is it set back much farther from the street than the other homes nearby? Does it have a curb cut, allowing off-street parking on a driveway in the front yard, when the other homes lack this? Does it have a prominent side yard when none of the neighboring homes do? The neglect of the details in an infill project can compromise the underlying ambitions of neighborhood revitalization far more than cornice lines, window treatments, brick versus wood, rooftops, or even overall heights of buildings. And it’s not about their jarring look per se—it’s about the precedent they set for subsequent infill development.

But setting a precedent is exactly where things get murky.

Now and then, residential infill adheres rigidly to its forebears: the new construction blends in almost seamlessly with the neighbors. Mount Adams in Cincinnati offers an excellent example. 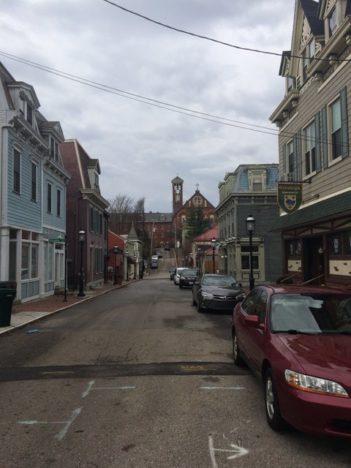 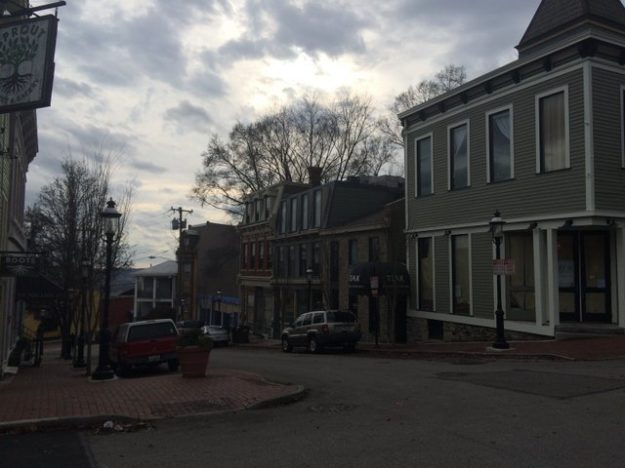 The hilltop neighborhood, which boomed shortly after the Civil War, sits directly east of the city’s downtown. Despite considerable urban changes through the 20th century, Mt. Adams has largely remained stable, resisting the considerable depopulation that took place in neighboring districts like the well-known—and now gentrifying—Over-the-Rhine, just a half-mile to the west.

The topography of Mt. Adams no doubt benefited it greatly: not only did the steep hill render the neighborhood comparatively inaccessible and thus removed from the social ills plaguing the low-lying precincts, but the fact that Mt. Adams offers some of the best views of the Ohio Valley and the Cincinnati skyline have almost ensured that land values would remain relatively high. For example, no one in this small neighborhood is more than a five-minute walk from the Mt. Adams steps, which offers vistas like this: 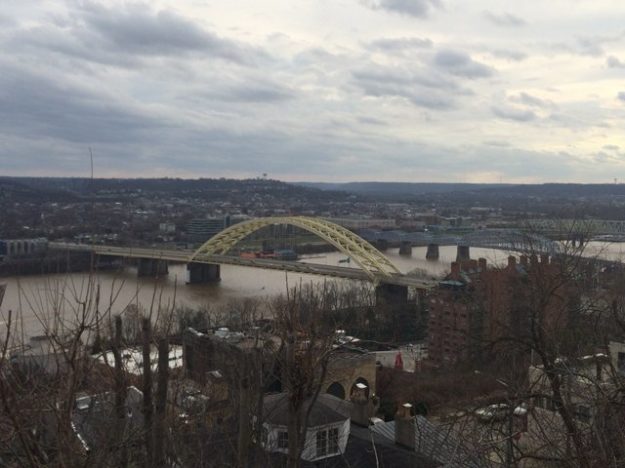 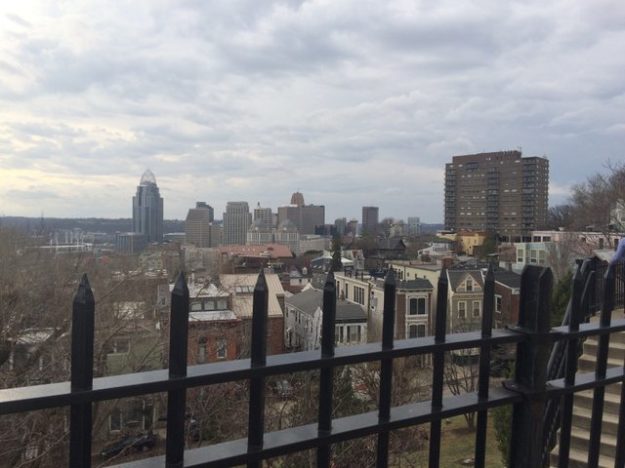 While Mt. Adams is first and foremost a residential district, it offers a smattering of small shops and eateries. Perhaps the centerpiece is the Mt. Adams Bar and Grill, operating at this location for nearly eighty years. 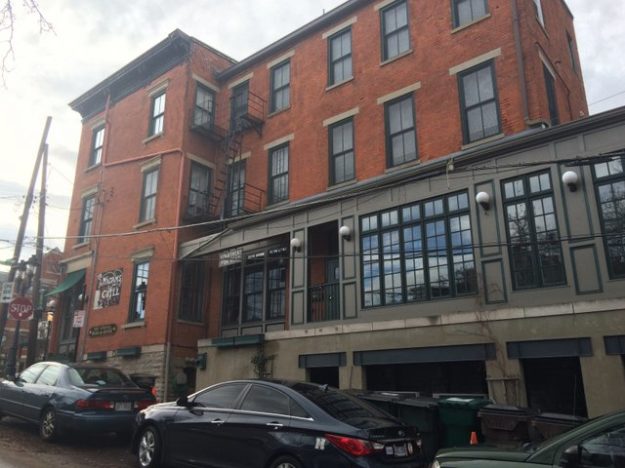 But of greater interest is St. Gregory Street, which terminates at the Mt. Adams Bar and Grill and serves as the de facto main street of Mt. Adams. 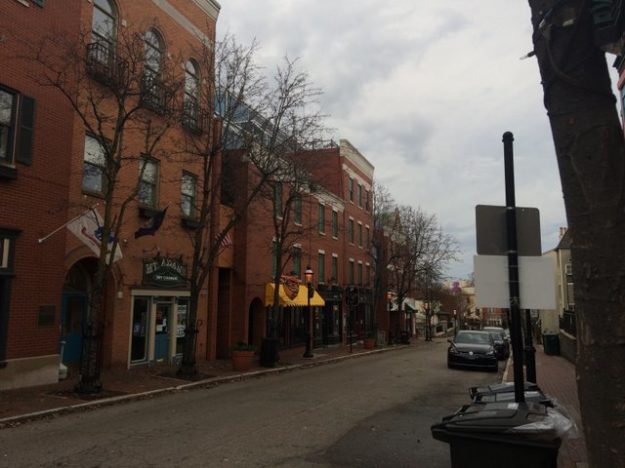 Although it’s predictable that a 19th century neighborhood would offer a variety of shops in a mixed-use setting, with storefronts at street level and residences or offices above them, usually the surrounding neighborhood is reasonably large. Most estimates suggest that Mt. Adams has only about 1,500 people, and, as indicated earlier, it’s a comparatively isolated setting. In other words, one wouldn’t expect Mt. Adams to be large enough to support much in the way of retail. Yet somehow St. Gregory Street still serves as a three-block commercial corridor.

How did it get this way? Let’s take a closer look at that cluster of buildings on the west side of St. Gregory—specifically the one in the distance, with the green shutters: 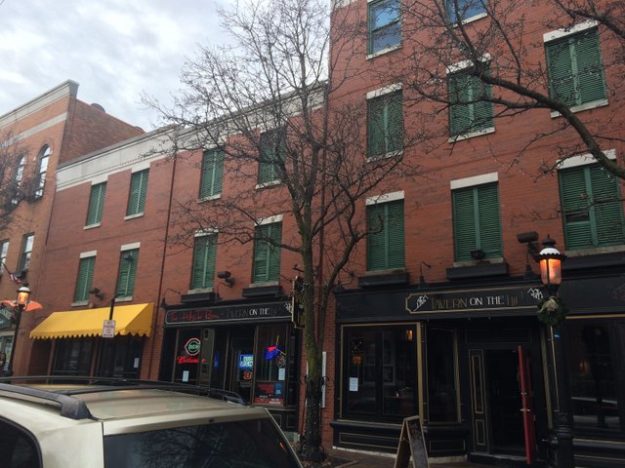 The same details that historic preservationists cavil over—the cornices, the window treatments, the weathered look of the masonry—offer all the cues that this is not as old as most of the structures in Mt. Adams. One observes the same conditions elsewhere on the block—to the left of the building with orange brick. 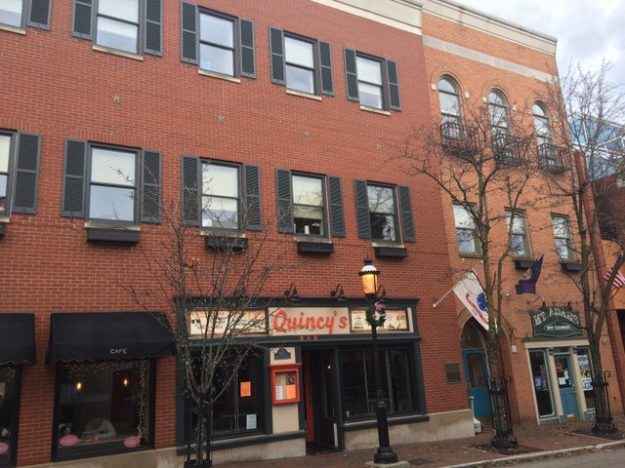 The fundamentals are all there: height, massing, setbacks—the things that matter for maintaining the integrity of a walkable old neighborhood. But the building on the left suffers from a certain flatness, an absence of patina, a brushing over of key details—all of which hint that the structures housing Quincy’s and Tavern On the Hill are both residential infill, imitating the look of the previous century. If my superficial dissection of architectural details does not convince, take a look at this Google Street View.  Yes, the more northerly of the two red-brick buildings also has a parking garage tucked within its sturdy, Italianate façade. There’s absolutely no way it comes from the same time period as most other buildings in Mt. Adams.

My suspicion is that the orange-brick edifice is a good fifty to one hundred years older than the red-brick structures that flank it. In all likelihood, the two original buildings fell into neglect and dilapidation over the years, then eventually faced demolition. The parcels may have even languished as parking lots for some time. But, many years ago (long before urban revitalization became a “thing” in cities like Cincinnati), an enterprising developer recognized the potential of this lovely old hilltop community that never fully declined. This developer decided to construct some residential infill at these two sites to add further density and activity, and, of course, to capitalize on its low crime and postcard views.

Despite the relative scarcity of shops in Mt. Adams at that time, this developer determined that first-floor retail might still be viable, no doubt enhanced by the fact that he or she added a parking garage and considerable density to the final product. (Though not visible through any of my photographs, this aerial shows that the northern of the two parcels features an additional three floors in a stepped-back fashion, with contemporary floor-to-ceiling glass that is virtually impossible to see during a stroll along St. Gregory Street.) In short, by infusing this residential infill with additional parking and a considerable number of new housing units, all while maintaining a fidelity to the most pervasive architectural language in Mt. Adams, the developer endowed this block of St. Gregory with a convincing main street character it might otherwise have lacked.

Perhaps a dyed-in-the-wool Cincinnatian can correct me where my speculative narrative strays from the truth. But my conversations with current and former residents support my assertion that this infill is at least twenty years old. And what remains most interesting is the conservatism of the redevelopment approach. It takes a keen eye to notice that it’s infill. This, I suspect, seemed like the optimal means of investing in an old neighborhood at a time when such practices were uncommon. Why splurge on an already risky investment by using unorthodox design, when inner-city neighborhoods like Mt. Adams saw so little investment during the peak of America’s urban decline? 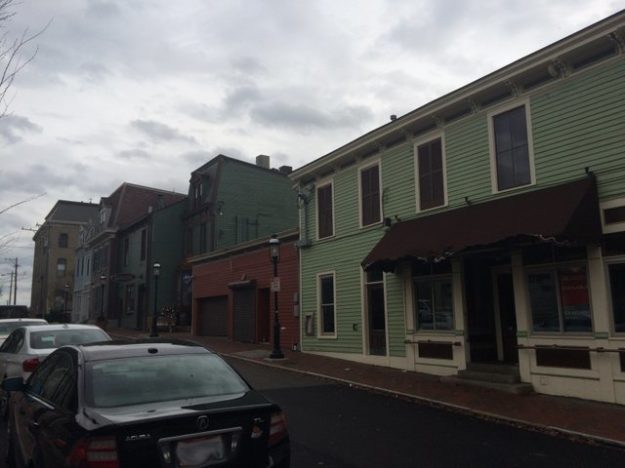 If my suspicions are correct, this deceptively large, effectively inconspicuous residential infill comes from an era when healthy, stable urban neighborhoods seemed on the verge of complete extinction, especially in medium-sized Midwestern cities experiencing significant population loss…like Cincinnati. At that point in time (my guess is sometime between 1980 and 1995), fidelity to the architectural/aesthetic principles under which Mt. Adams first prospered no doubt seemed particularly important. These days? Not so much. Elsewhere in Mt. Adams, we witness residential infill that flaunts its anachronistic look. Like this one, where the home on the right completely clashes with its neighbors. And—even more ironic—it’s not just an infill but a complete teardown, replacing a more conventional home that stood at the location way back in 2007, according to an older Google Street View. Elsewhere in Mt. Adams, a single building evokes multiple languages—an architectural palimpsest, abetted by an ostensibly lax historic preservation culture. And homes like this are cropping up everywhere—maybe even 5% of the total housing stock in Mt. Adams. The only common thread is that the homes, old and new, still occupy very small lots. Therefore, the intimate, close-knit, walkable nature remains intact.

In one of Cincinnati’s most stable 19th century neighborhoods, redevelopment is everywhere…if you’re looking for it. Mt. Adams manifests an unusual and perhaps not yet fully vetted collision between revitalization and preservation. It some ways, it may seem surprising that the contemporary infill is cropping up now more than ever. After all, don’t the long-term residents of Mt. Adams see all this encroaching new development as some sort of threat to the neighborhood’s historic character? Perhaps they do, and the absence of any visible preservation commission—at least, nothing that I can find—is only because the ardent preservationists are just beginning to roll up their sleeves for a fight. But why would it be so hard to find evidence of opposition to this non-conforming infill? Why no preservationist website? Why are they coming so late to the battle?

Perhaps the Mt. Adams worldview is closer to what I evoked in the first two sentences of this essay: new architecture clashes with old, and that’s no big deal. Maybe prospective homebuyers of the neighborhood already know that the real appeal of the neighborhood is its walkable character, its topography, its remarkable views…while the aesthetics increasingly shift toward pastiche. As our desire to galvanize urban regeneration supersedes everything else, the modern may have to intrude upon the antique. 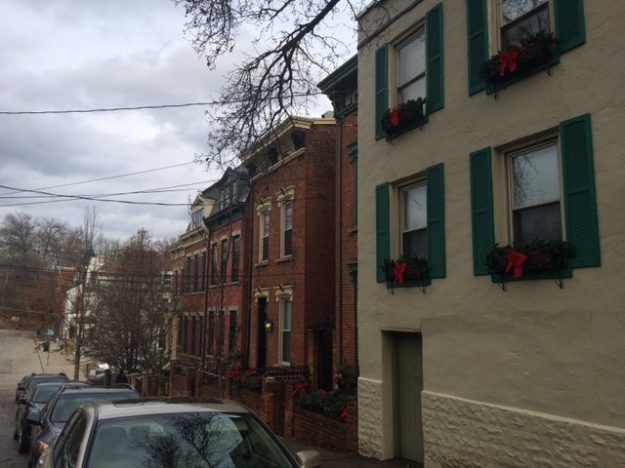 Lots of people want to live in old neighborhoods; considerably fewer want to live in old homes, or even modern renovations of old homes. Thanks to more sophisticated heating and cooling systems, the contemporary homes in Mt. Adams tend to have much more expansive windows, capitalizing on wonderful Cincinnati views that no 19th century home—or even a carefully cultivated facsimile—could ever achieve. This, more than anything, may explain why those mixed-use buildings on St. Gregory Street sought the best of both worlds: a careful reproduction of the 19th century vernacular for the lower floors, while the top three floors give us unrestrained, glassy modernity. In Mt. Adams, you can have it your way…as long as your pockets are deep enough.

PrevHighest and best may not be tall, but it’s still higher and better.
Chatham Arch, Part I: Density in 2017 ain’t what it used to be…in 1917.Next

2 thoughts on “In Mt. Adams, residential infill gets the old spit ‘n shine.”