Highest and best may not be tall, but it’s still higher and better.

Urban neighborhoods have been changing considerably over the last decade, and, in many locations, income levels have risen steadily. When we hear about gentrification, the coverage often reaches us through a few recurrent tropes: data-driven accounts of demographic and socioeconomic change; journalistic interviews of individuals who have either left or feel threatened by the rising cost of living; a sardonic look at how the retail climate has shifted to reflect increasingly affluent tastes, morphing from pawn shops to yoga studios, or the like. Nearly all of the coverage on this topic reveals at least a vague tenor of negativity—rarely, if ever, does the narrative simply impartially chronicle what’s taking place. It’s usually a bad thing. Other advocates have already completed the aforementioned exposés on gentrification—individuals with more commitment to the topic than I have. It’s a divisive subject that, in my opinion, has yet to play itself out enough to form any solid conclusions, so it is and long will remain a tempest in a teapot.

Even my first statement here was a bit disingenuous: sure, urban neighborhoods have been changing considerably in recent years, but how is that different from previous decades? The only difference is, for the first time in half a century, many of them are not getting poorer. Regardless of what one thinks about gentrification, it’s happening in cities large and small, though often to varying degrees. But it doesn’t take demographic research, or community interviews, or survey of primary commercial tenants to find out. Sometimes a few snapshots are all you need. 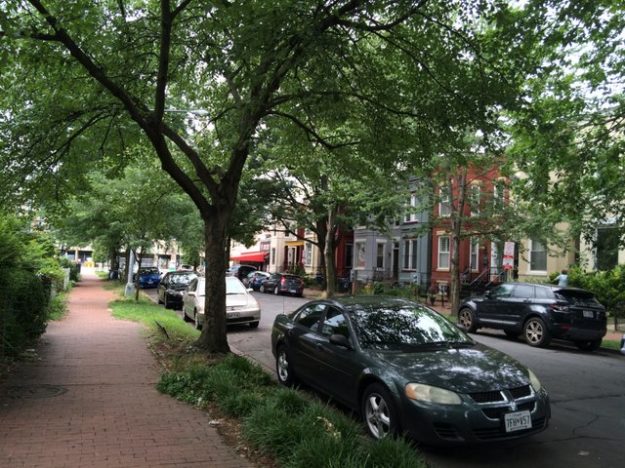 It’s the Near Northeast of Washington DC, just a bit north of the much more established Capitol Hill neighborhood. As recently as a decade ago, it was a rough part of town. These days? 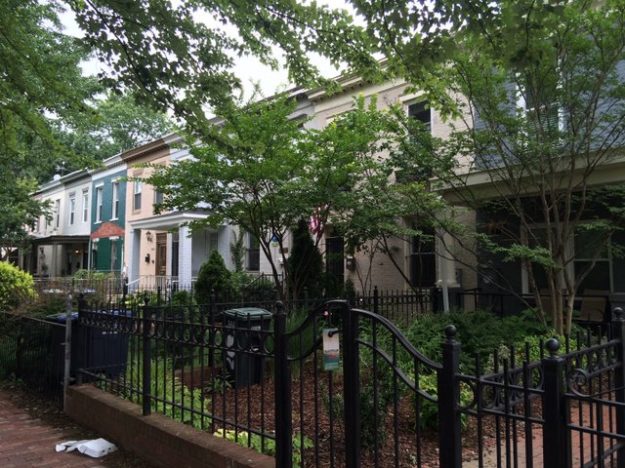 Most of the tidy rowhouses look great but still have fences out front to impose a minor barrier to the potentially criminally minded passers-by. But those are wrought iron gates—which take a fair amount of money to install. No chintzy chain-link fences. 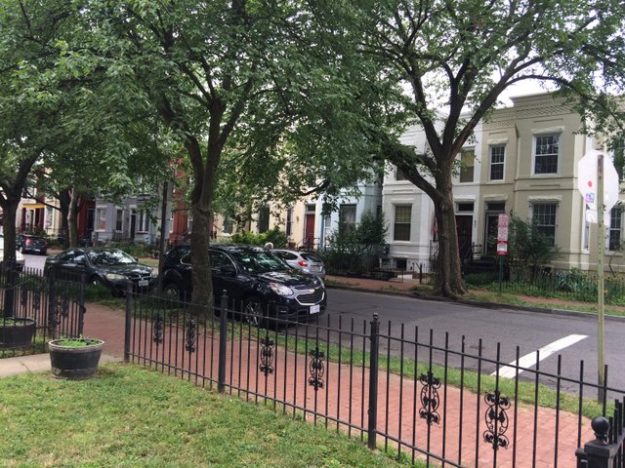 The owners of these homes aren’t poor. And, in a few instances, they’re breaking from the routine. 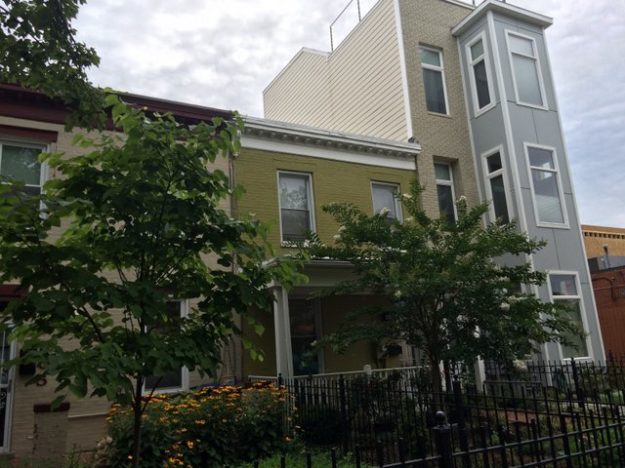 The brand-new, three-story home sticks out like a sore thumb, and, in a fancier area like Georgetown, the neighborhood would likely shoot down its nonconforming massing and jarring architecture. But the Near Northeast hasn’t yet secured a culture were preservationist dogma can assert itself. So this home protrudes like a whack-a-mole. If there were even just a few more of these—for example, every fifteenth home—this wouldn’t look so jarring. And, as real estate prices steadily climb in the neighborhood, I expect that the demand will only increase for teardowns: to replace a small and potentially dilapidated older home to with something much larger. And, as the neighborhood gentrifies, the armchair architects will surge in both number and influence. But will they have much ground to stand on? Nonconforming uses are already widely visible. Elsewhere on the same block, for example, we encounter this: 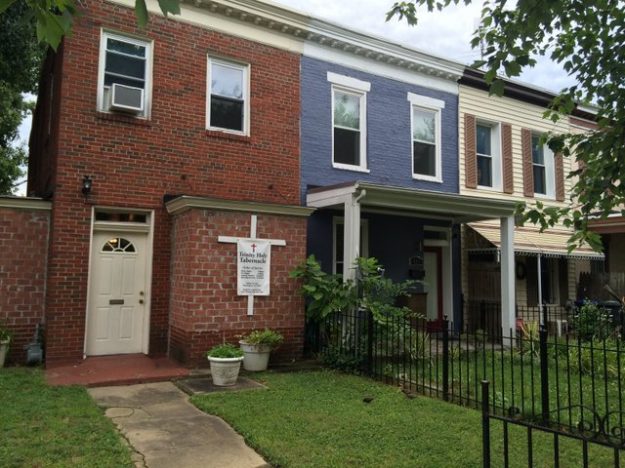 It’s a tiny church, made out of what appears to be a converted rowhome. It’s unlikely the original architect of this home ever imagined it would serve as a chapel, but as the neighborhood changed, the demand emerged to serve a congregation of no more than two dozen. The pastor did not need (and probably could not afford) an edifice originally intended as a freestanding church, so a simple rowhome would suffice. And a reused home is in almost all respects a preferred condition than a vacant one, though it’s not something we expect to see in areas with rising land values. Then again, land values in this part of DC weren’t rising for most of the second half of the 20th century.

The times are changing, and the residential scene isn’t the only indicator. Turn the corner and we face an emergent main street. 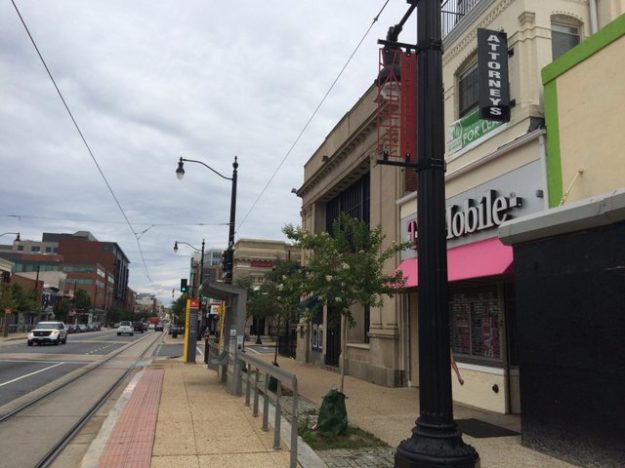 H Street Northeast is a far cry from some of the hipper, more established creative class corridors in the city: U Street always comes to mind. Gentrification is obvious, though. 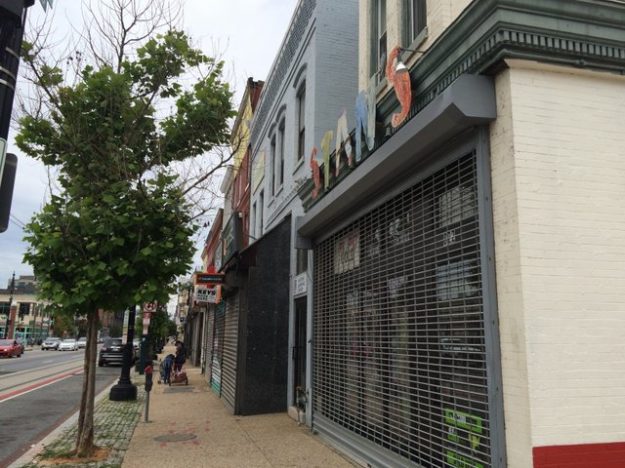 But I promised I wouldn’t focus on all the new juice bars, tap rooms, or places that sell a $6 cup of coffee. Let’s look at something a little less glamorous: 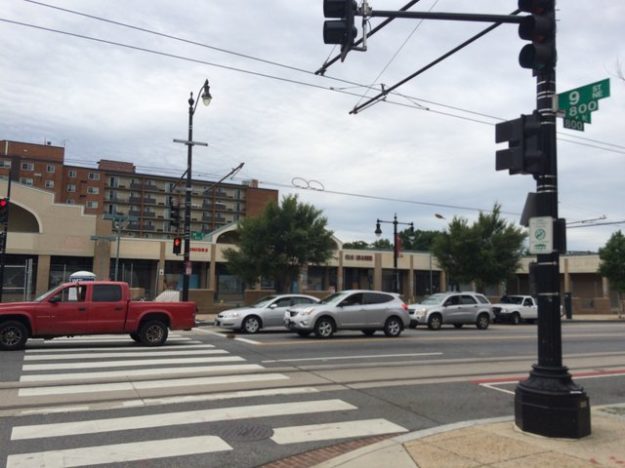 It’s a fundamentally automobile oriented strip mall with parking out front, in an otherwise sidewalk-oriented neighborhood. And it’s less than a mile away from the US Capitol, as the crow flies. 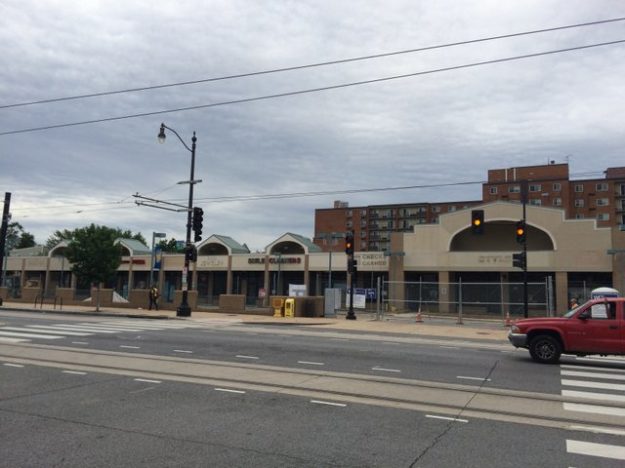 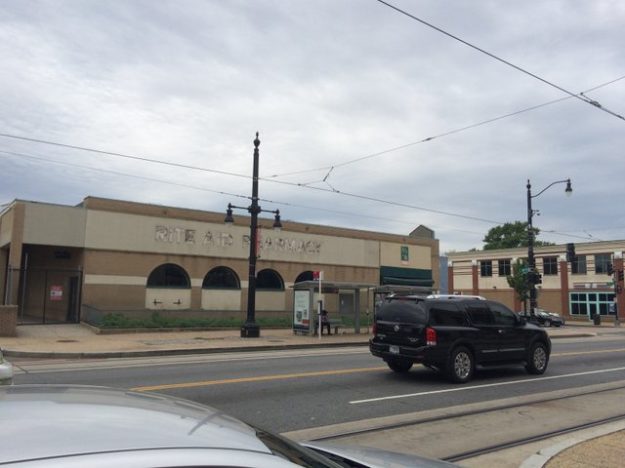 But it’s not the aftermath of blight and disinvestment. Quite the opposite. As of July 2016 (when I took these photos), the strip mall was awaiting demolition, to be replaced with a larger development that combines residences with street-level retail and services.  More gentrification.

I think we can guess the narrative. At one point in time, both sides of H Street probably claimed the variegated, two- and three-story commercial buildings that currently only line the north side. As the neighborhood declined by the middle of the 20th century, many of those 19th century structures struggled to retain tenants, further contributing to the visual decay. In an attempt to shore up what remained a densely populated (albeit increasingly poor) neighborhood, a developer purchased an entire block of those old, seemingly obsolete buildings and razed them. (I suspect that the city even vacated the right-of-way for a block of the perpendicular 9th Street so that the developer could build that land too.) Across these two blocks, sometime in the early 1980s the same developer constructed the retail strip, in keeping with the demand of the time for convenience-oriented shopping, drive-thru opportunities, with free (or very cheap) easily visible parking out front.

It seemed like a good idea at the time. Now, as the young professionals move into a formerly depressed neighborhood, they bring their taste culture with them—one that includes a far greater fondness for restored buildings and the urbanism of a continuous street wall. Easy parking seems passé. As a result, the two-block strip mall seems like an ersatz intrusion on H Street’s integrity as a commercial corridor. And, with higher incomes encroaching, the land is worth more—much more than would justify a one-story, unimaginatively adorned row of cheap shops. Look at the array of buildings further down H Street in the direction of the US Capitol. 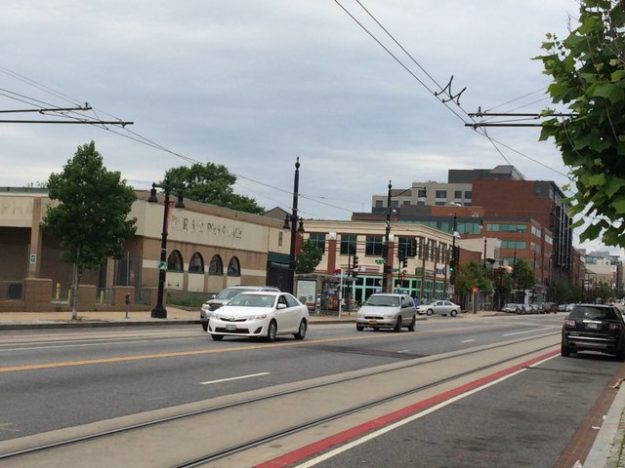 It was only a matter of time before someone recognizes that something better deserves to go up here. And, just a few months after my photos, a Google Street View reveals that the entire shopping center has come down.

As most people who have visited Washington DC already know, the nation’s capital has strict height limitations: that nothing can be taller than the tip of Washington Monument. Bearing in mind this constraint coupled with the high value of land across much of the city, the value conferred to a development by raising it from a mere one story up to three or four is, no doubt, far greater than it might be in cities that lack such regulations. And anything is better than zero stories (i.e., a vacant lot). In all but the most impoverished neighborhoods—which are far fewer in number in DC than they were just twenty years ago—land values have increased to the point that even the smallest vacant lots are finding buyers. Take this one, directly across the street from the now-demolished strip mall, on the north side of H Street, taken in 2011. The graffitied orange fence doesn’t look like much. But that tiny patch of land, probably less than one-twentieth of an acre, found a buyer. Here it is from earlier this year.

Though often synonymous with displacement, gentrification can assert itself in the humblest of ways, often lacking any sort of ulterior motive. In fact, the word “gentrification” itself typically carries a negative connotation, though my guess is that’s a new phenomenon; the Latin etymology of the word is far more neutral. (Why not call it “revitalization”?) These tiny, almost boring little developments take place in the background amidst the higher profile transformations that elicit public outcry about insensitivity to the poor: i.e., the public housing coming down, the long-term tenants evicted because of escalating rents. But the forces animating gentrification are more powerful than the most committed affordable housing advocates. The whack-a-mole analogy from earlier seems all the more apt: no matter how hard we try to tamp it down in one location, it asserts itself in another. And then an organic juice bar leases the storefront next door.

13 thoughts on “Highest and best may not be tall, but it’s still higher and better.”