Mall department stores: will the last one please turn the lights out?

We’ve been hearing and witnessing for years the turbulent state of American retail. Conventional sellers of durable goods—of housewares, sporting goods, electronics, and clothes—have suffered in general, and malls have suffered in particular. But even more salient have been the struggles of the historic department stores to our malls. Scarcely a week goes by when national media heave out new articles explaining cost-cutting measures deployed by Macy’s, Sears, and J.C. Penney to help shore up their bottom lines after plummeting same-store sales. Or they just announce the latest wave of closures.

Perhaps, though, the crux of the matter isn’t so much whether malls or department stores are doing worse. It’s about how co-dependent the two are. After all, the aforementioned stores have served as the “Big Three” across much of mall culture for the last decade or so. Virtually all malls in America have at least a Macy’s, Sears or J.C. Penney; many have all three. And none are doing that well; thus, the malls themselves are often floundering. But it’s not just about the fact that these three are struggling everywhere. It’s simpler. They are everywhere, and they are struggling because of it. In 1985, in a metro over one million people, chances are a consumer had at least four malls from which to choose within a 30-mile radius. The overlapping patchwork of small, regional department stores meant that each of these five malls had at least a slightly different combination of shopping opportunities. Sure, the average suburbanite would probably favor the closest mall to home 80% of the time, but now and then he/she might be willing to drive thirty minutes for that other combination of department stores and in-line shops, where at least 25% would be different from what they’ve got in their neighborhood. After decades of mergers and acquisitions, we have come to expect one of the Big Three in just about every mall in the country. There’s little to distinguish the mall five miles to the south from the mall fifteen miles from the west, and every metro with more than one mall has its winners and losers. And at least one of the losers probably closed within the last fifteen years.

For years, the telltale indicator of a dead or dying mall has been the health of the interior space: the hallways occupied by all the smaller, in-line tenants. It’s not just the occupancy rates; it’s the tenant mix. Some malls may be over 80% occupied but still show signs of depreciation because they fail to attract as many of the nationally known brands. If more than half of a mall’s tenants are mom-and-pops, chances are the management cannot charge the rates to attract the big names. I’ve chronicled the portents of declining malls numerous times on this blog, usually by walking those long broad hallways. But sometimes you can see the indicators inside the department stores themselves, particularly the Big Three: those middling Macy’s, the pandering Penney’s, the stumbling Sears. Without even giving away the name of any malls, I offer this: 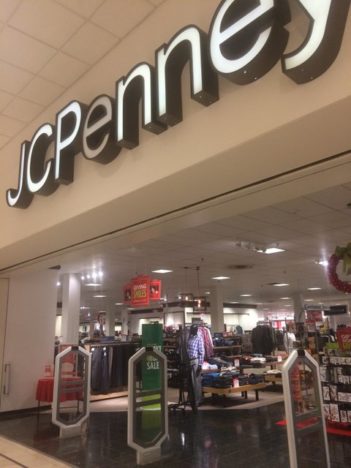 Sure, it’s a Penney’s, viewed from the interior of a mall. Doesn’t look so weird, right? I’ll at least divulge that this mall’s health is above average, and the entire layout is two floors. But let’s step inside. 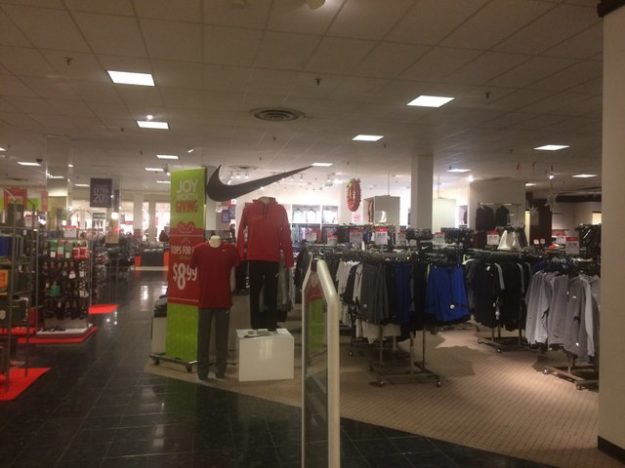 Notice anything strange? It might be hard to tell from an isolated photo, but doesn’t the overall appearance seem just a little bit drab? Here’s a view of the entrance at a slightly greater distance. 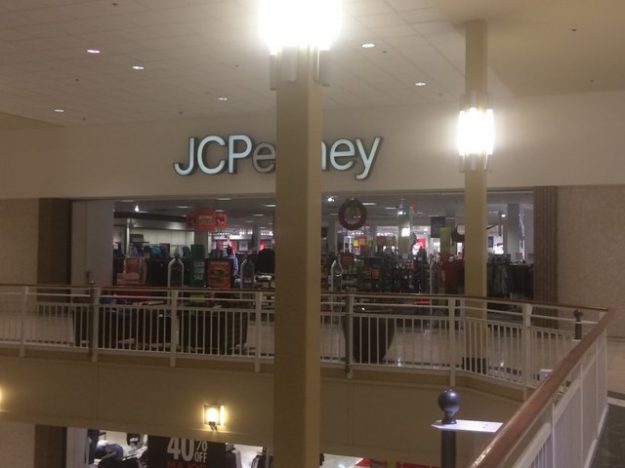 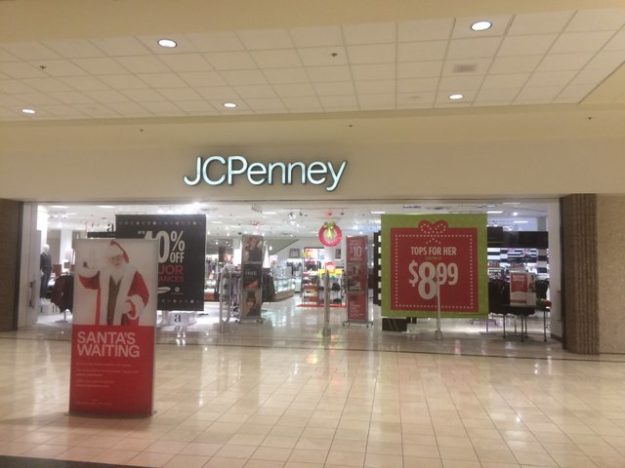 Looks significantly brighter, right? Yes, indeed, despite the fact that the mall is open, the operators have chosen either to dim the lights on the second floor, or to simply use fewer lights. I suppose we could devise a number of reasons for this. First of all, it wasn’t a busy time: most people weren’t out shopping on November 8, 2016 when they could be awaiting the results of the presidential election. Secondly, the merchandise at the second floor entrance (men’s sporting goods) probably isn’t as lucrative as the typical first-floor presentation, with its perfumes and cosmetics and women’s apparel. But it’s hard not to think that dimming the lights is a last-ditch measure to help cut costs. The typical mall has CAM (common area maintenance) fees that cover most utilities, so I’d imagine the in-line tenants pay a percentage share of the mall’s overall utility bill. But it’s likely the department stores, as anchor tenants, have completely different leasing agreements. If my speculations are correct, J.C. Penney has decided to pinch those pennies by offering mood lighting to the men shopping for Nike and Under Armour.

If this seems like a desperate move for a major Big Three player, it still pales in comparison to Sears. Formerly the national standard for affordable odds and ends, Sears and its partner Kmart may face complete extinction in the years ahead. The photos below come from a Sears at another nearby mall. 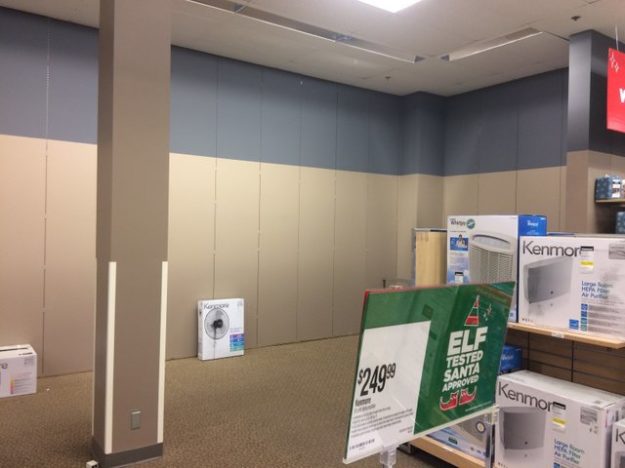 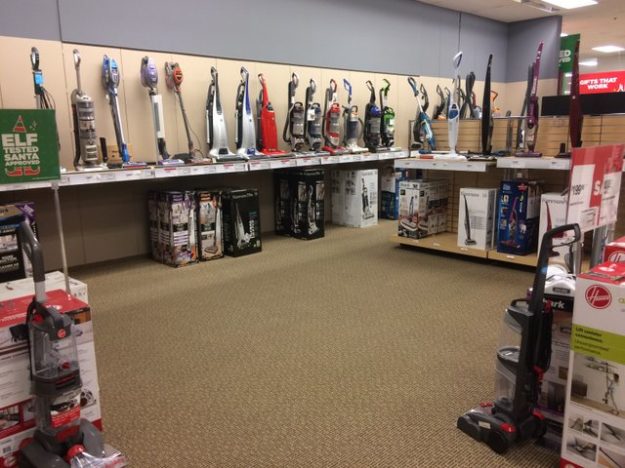 I’ll concede that this mall is much weaker economically, with about 50% vacancy. But the photos come from a weekend night during the busy shopping season. It’s not so remarkable that the Sears itself is bereft of customers—we all expect that—but it doesn’t even seem to hold that much merchandise. I mean, look at those vast empty spaces. 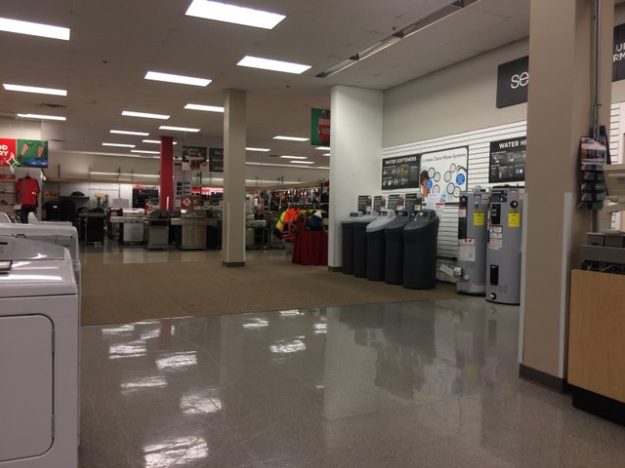 And compare this to Kohl’s in the same mall. 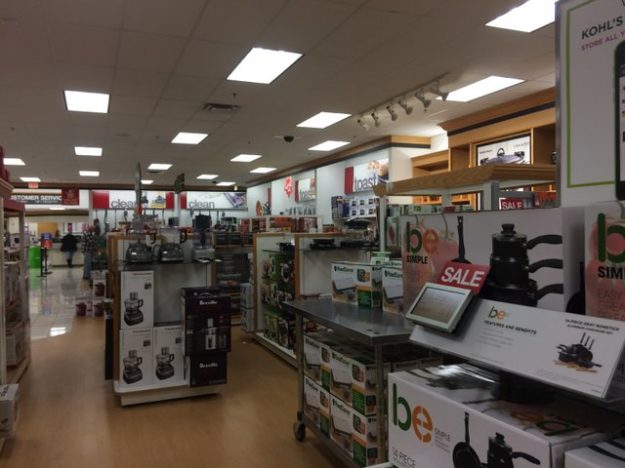 Generally maximizing the use of the floor space. Granted, Kohl’s is among the few middlebrow department stores that has shown few signs of stumbling…a contrast from the Big Three. It closed a few underperforming locations in the past year, but its forecasts generally remain promising. Then again, Kohl’s rarely affiliates with malls; this example in the photo above is an exception. As I noted earlier, Kohl’s tends to serve as an anchor tenant in more conventional strip malls, or the outdoor-oriented power centers.  It has proven surprisingly resilient so far—an unapologetically healthy retailer while its competition retreats to hospice care.

Competition like Sears. I’d imagine Sears could be a little lax with its use of gross leasable floor space; in a middling mall, it’s probably not paying a whole lot. But according to this Business Insider article, Sears may owe much of its emptiness to the fact that suppliers don’t trust the company’s solvency. Things are so bad at Sears (and Kmart) that they can’t even stock their spaces with full inventory.

We can and should expect a big shoe to drop in the next few years, probably in the form of one of the Big Three declaring Chapter 11 bankruptcy protection. You can tell from my coverage which one I’m betting on. But then, what will that mean for the hundreds of malls that depend on these stores for tenants? Some operators are already starting to recognize that the future for commerce is the information superhighway, and they’ve begun wooing online start-ups to take the smaller tenancies at malls. But customers won’t have any reason to patronize malls filled with nothing but personnel to run an online company. Thus, the malls won’t need those huge parking lots. Regardless of the future, it’s hard to gauge exactly who dominates chessboard that we perceive and live as our contemporary consumer landscape. Who’s the grand master? Probably nothing more than Adam Smith’s invisible hand.

PrevWho needs Vegas for quirky chapels? The rest of the country is holding its own.
The Marietta in Indianapolis: Infill and Preserving Murals.Next

24 thoughts on “Mall department stores: will the last one please turn the lights out?”