When strolling Main Street has all the flair of flipping through the Yellow Pages.

I’ve explored the ridiculous oversupply of retail space in our country numerous times, in this blog and others. But I’ve approached it from enough angles that it doesn’t seem to get old, at least not to me. I find the vast parking lots to power centers just as interesting as an immaculately maintained commercial street. And I’ll never get bored of dead or dying malls.

But one topic I’ve only covered briefly (and most prominently on another blog, Urban Indy) that effectively bespeaks this oversupply is the fact that some of the most attractive, century-old buildings in our finest main streets are still failing to attract good retail…even when the main streets themselves are thriving in almost every respect. What do we often see in these storefronts instead? White-collar services: accounting, engineering, real estate, finance, insurance, law.

There’s nothing wrong with this, per se: at least someone has chosen to tenant the space. But these services rarely, if ever, add to the energy level of an emergent commercial corridor. As I explored more thoroughly on the Urban Indy post, the aforementioned businesses can choose the big, bold windows of a street-level space on a postcard-perfect main street, but they don’t need it. They don’t depend on windows for their appeal, and their customers aren’t usually making impulse decisions to patronize an accounting or law firm, nor are they attracted by storefront bling. And these businesses are rarely open on evenings or weekends, when the nightlife culture is at its apex—i.e., the ambiance that sustains many of our main streets. So, when we encounter engineering or law firms in a space that might once have contained a bakery or a toy store, we witness a sort of downgrade in the real estate itself. The landlord probably would have preferred a goods-based tenant, because they generate more foot traffic and help foster a sense of liveliness that an insurance agency simply cannot achieve. (Then again, a law firm is probably a more stable tenant than most retail, with a much lower likelihood than an apparel store of folding or relocating after three years.)

That said, another reason we don’t like too many white-collar services in our historic storefronts is because, quite frankly, they simply don’t know what to do with them. Case in point: the building below. 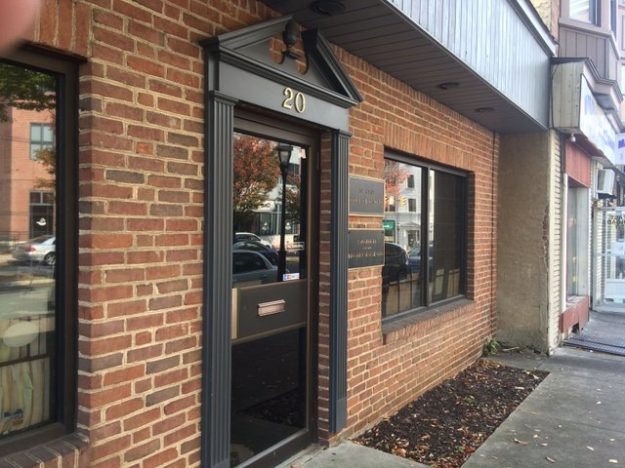 It’s on a generally healthy main street in Pennsylvania, and it features big bold windows and a see-through door. But the law firm tenant seems to have ignored this potential advantage. Look at the view through one of the windows. 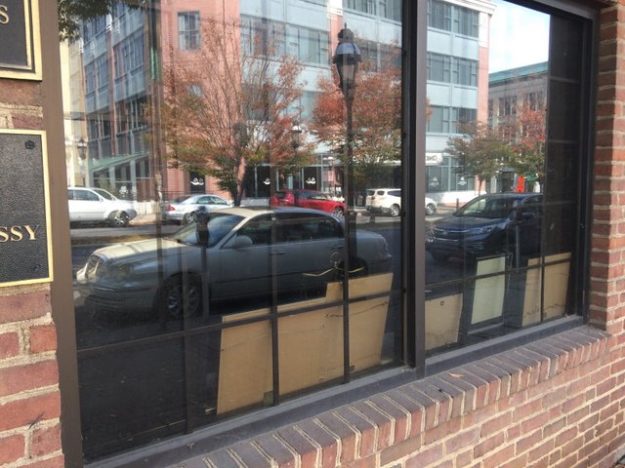 It’s clear that these are pictures intended for wall mounting. Probably at least a few plaques. But here they are, with their backs to the passers-by. If they really are plaques, you’d think the partners at this law firm would want to show off their credentials. Instead they face the interior. At first blush, this seems particularly short-sighted and downright strange to me. How could they neglect such a golden opportunity at self-promotion? It turns out the other window might be even worse. 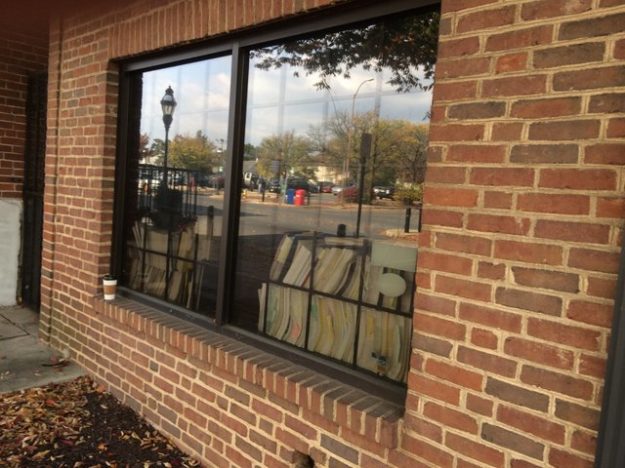 Thick books, papers and other files, with the spines facing inward. Essentially, this law firm is treating its window as the equivalent to the space behind a bookshelf. Complete throwaway. If it seems a little cruel for me to single this law firm out for scorn, now it’s time for the rebuttal. Of course the law firm chooses to use the space in this fashion; why shouldn’t it? It doesn’t matter to them, and it’s likely that all the real wall space inside is already replete with portraits and historic records.

And it logically follows that, while this edifice clearly intends to operate as a storefront space along a pedestrian-oriented street, it’s hardly some sort of architectural treasure. Most of this main street features buildings over a century old; obviously not this one. In fact, a quick look at the surrounding context suggests that the law firm’s office space is infill. Here’s a view that includes the adjacent building to the west. 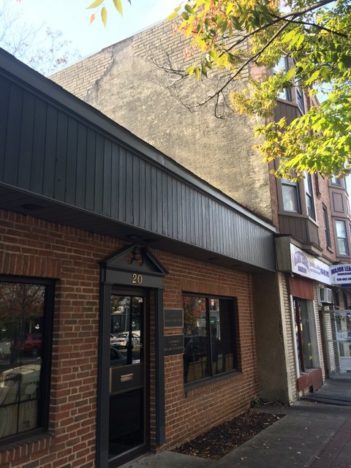 Notice that it’s three stories tall, but the side of the building is a blank brick wall, with no windows. Chances are, at one point in the past, another three-story building directly abutted this one, as an attached commercial building with either additional office or residential space above. That building faced demolition years ago, and the unimpressive one-story building took its place. The opposite view—of the adjacent building to the east—offers further indication of this history. 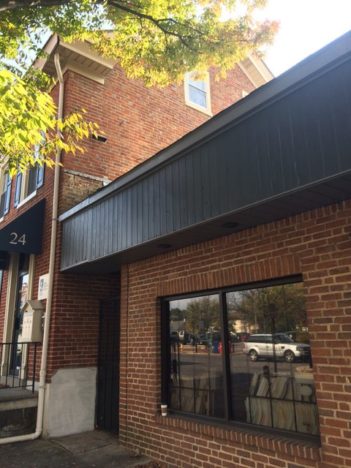 In this case, the side wall does feature two windows on the third floor. Perhaps the law firm’s predecessor was only two stories, or maybe it didn’t directly abut the neighboring building. Regardless, it’s clear that our law firm is an architectural outlier, possibly built a time when the land values along this main street weren’t strong enough to justify anything more than one story for the infill.

Thus, we find a low-ambition piece of real estate that doesn’t really offer much draw as retail, despite those prominent windows. The property managers cannot command very high leasing rates, and bakeries/toy stores wouldn’t want it anyway. It’s still a pretty good location; just not a great building. When we see spaces like we have to remember that these service-oriented tenants could just as easily occupy the 14th floor of a high rise: i.e., engineering, accounting, finance, or a law firm in this case.

The economy along this main street is generally pretty strong, and economies in historic commercial centers all across the country are improving. So maybe, if conditions continue to improve, someday the rates will be high enough that 1) either retailers will decide those big windows are desirable after all, or 2) the typical law firm realizes it doesn’t need the windows or direct street access and decides it isn’t worth it. But I wouldn’t hold my breath for such a transformation. After all, in the internet era, conventional storefront shopping is seriously struggling, and through the battle of bricks versus clicks, more and more retailers are deciding that a presence on the information superhighway is more critical than a similar presence on main street. Law firms, meanwhile, might still have a website, but they need an accessible office space as well. As much as we love the concept of “window shopping”, there may come a time in the future where walking along the main street sidewalk and staring into those windows will reveal far more folders and files than flannels and flowers.

4 thoughts on “When strolling Main Street has all the flair of flipping through the Yellow Pages.”