These days, if you’re looking to fly out of Newark Liberty International (EWR) and you have no choice but to approach this widely transit-accessible airport by car, chances are strong that you’ll save big bucks by opting for one of the independent, off-site parking providers. And then, if you opt for one of those off-site providers, the private company itself will shuttle you to the mile or two (or three) to your desired terminal at EWR. Depending on the terminal you specify, you might need to schlep your luggage a bit further before you make it indoors, because you have to walk through this foreboding landscape: 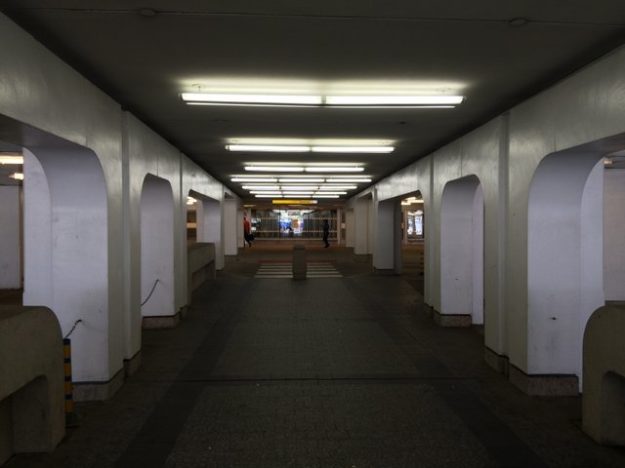 It might not look that striking from this angle, but the relative absence of people during daylight hours should be a bit alarming. After all, this airport accommodates over 35 million passengers in a typical given year. But a glance to the left and right prove much more bleak. 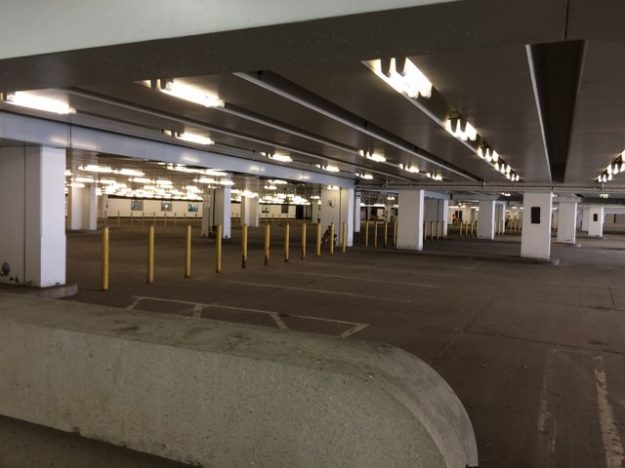 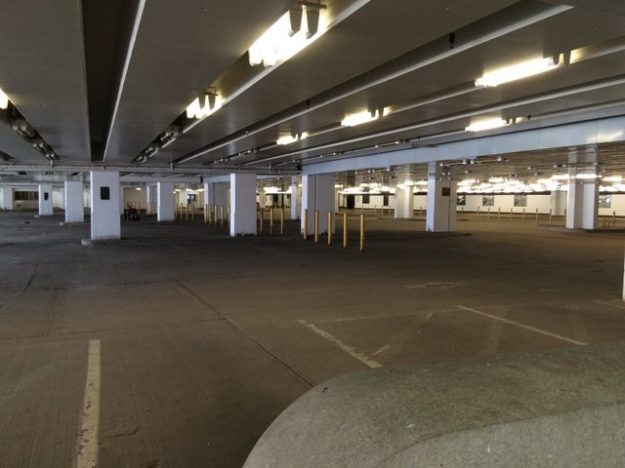 Completely deserted. And not just empty—it looks more than a little unmaintained: cracked pavement, peeling paint on the bollards, burnt-out lights, and so forth.

You’d almost think it’s abandoned. And, for all intents and purposes, it is. Unfortunately, I cannot find any details to explain exactly what the rationale is for keeping such a wealth of convenient parking off limits. But I have my suspicions, which probably reflect those of most readers. The parking no longer meets federal standards for safety in the picking up and dropping off of passengers. And it fails not so much because of impositions from the Federal Aviation Administration, nestled within the US Department of Transportation. No, it failed the standards from the Department of Homeland Security, created in the aftermath of the September 11, 2001 terrorist attacks—an event that galvanized a complete re-thinking of airport security and (less known) prompted the addition of the word “Liberty” within the name of the Newark International Airport.

I don’t know the full details on enhanced safety setbacks after 9/11. I don’t even know if “setbacks” is the right word to describe this condition. “Standoff distances”?  And I could be completely off base here, and the reasons for the closure of this garage may have nothing to do with 9/11.  (After all, plenty of other major airports like PHL still have vehicular access right up to the airports entrance doors.)  But if I’m right and EWR faced particularly stringent new safety regulations, then this isn’t the first time I’ve witnessed an airport that had to reconfigure its space for optimization of security. Several years ago I reported that Roanoke’s airport had to sacrifice one of its six gates to accommodate the larger Transportation Security Administration infrastructure necessary in an era of escalating terrorist threat.  My suspicion is that EWR had to make a similar sacrifice.

The walkway isn’t long or difficult. Here’s a view from the shuttle drop-off point: 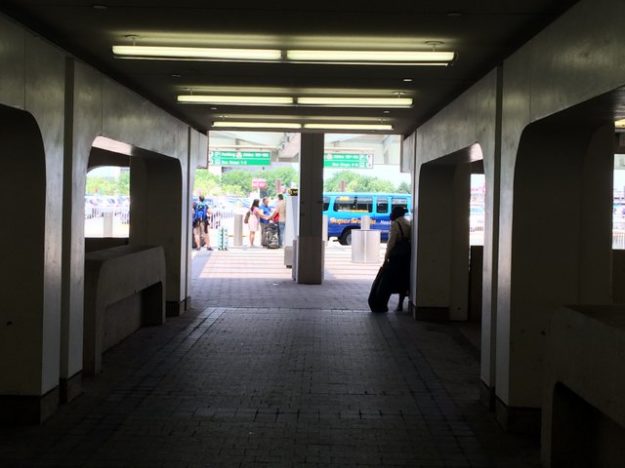 In the daytime it doesn’t feel unsafe or threatening. In fact, I suspect many people wouldn’t think twice about this modest little walk. It may, however, offer a different and more sinister ambiance at night, especially if so many of the lights are out. One can’t help but notice the irony: for the sake of enhanced security, a garage loses its functionality, essentially goes abandoned, and squanders much of the feeling of safety afforded by having people around. And the closure imposes a greater distance between cars and the front door, which definitely proves an added burden to individuals with mobility impairments. But I suspect it served an equally formidable onus to the authorities of Newark Liberty themselves, both financial and organizational. After all, the airport gave up dozens if not hundreds of parking spaces in the interest of enhanced security. And while EWR can post a more diversified array of alternative transportation access than most American airports, the authorities still had to pass this visible inconvenience onto their customers.

Unlike many airports, which have suffered an excess of real estate in the aftermath of the widespread consolidation of major airlines (CLE comes to mind), EWR appears to be holding ground, experiencing multiple expansions over the years that have no doubt recovered many of those lost spaces. But the impacts of enhanced security that trickle down to us, the passengers, offer a sharper sting farther up the chain. In this case, it’s not just an eyesore, it’s tens of millions of dollars wasted—not just in squandered operations but in neglected, paralyzed real estate that the authorities might love to use, but redevelopment costs are inevitably colossal. Maybe the garage will someday serve some other enhanced security-related function. A munitions testing center?

PrevWhen strolling Main Street has all the flair of flipping through the Yellow Pages.
Luring us back to the center, by whatever means necessary.Next