Who needs Vegas for quirky chapels? The rest of the country is holding its own.

I’d wager that the American religious landscape is currently undergoing a cataclysmic shift, but that would be disingenuous, since it suggests that the shift, with all these denominations, is something recent. It isn’t.

Religious expression—or the demonstration of it among its adherents—has never really been static in this country. Throughout the twentieth century, the number of Christian denominations has proliferated beyond any reasonable expectations. As I blogged about in my pipe organ series, the Gordon-Cornwell Theological Seminary estimated that the number of Christian denominations reached approximately 34,000 by the year 2000—an increase of over 2000 percent. While the United States can scarcely claim responsibility for all of this growth, it is safe to argue from the ubiquity of churches across the country—an institution that owes much of this ubiquity to the vast number of theological differences manifested through all those denominations—that the US certainly has contributed mightily. But the landscape changed just as dramatically in the 19th century, as new immigrants, mostly from Europe, brought their parochial religious customs with them and planted new churches where they settled. Much of the time, these immigrants moved here specifically because the country constitutionally protected religious freedom—something their mother countries often denied them.

Needless to say, this religious diversification, ingrained in American culture since well before independence, hardly screeched to a halt in the year 2000. In just the last sixteen years, Gordon-Cornwell estimates that the count of Christian denominations grew by another 10,000—a rate per year that is double that of the preceding century. While these numbers quantify global Christianity, the pervasive tendency for denominational schisms in the US, as well as the steadily growing rate of non-denominationally affiliated churches, suggests that, once again, this country contributes to a considerable portion of that growth. And, of course, this attribution fails to consider all the other religions of the world, virtually all of which are expanding their presence and influence here at home, due largely to immigration from nations far removed from Christendom.

But how does this constant theological transmogrification play out on the ground? All you have to do is drive across town—any town. 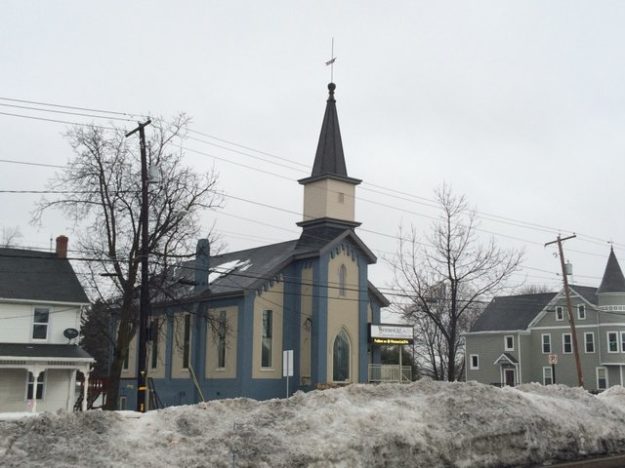 This suburban area outside a large metro in Pennsylvania shows it all: a chapel built right up next to the road. (The heavy snowbank might shroud it somewhat, but mark my words: the plows merely pushed all that grime pushed aside from the highway.) But is this still a church? Check the digital sign to the right of the entrance. 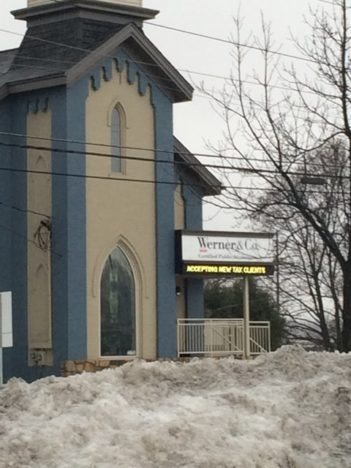 Nope. It’s an accounting firm. We can all guess the scenario: the church lost so much of its congregation that it had to fold and liquidate its real estate. Or the opposite: it grew so much that it could no longer fit in this tiny facility. My guess is it’s the former of the two. The building sits in a crossroads village near an affluent area that is developing quickly, mostly under much more auto-oriented standards, yet a cluster of structures sit right up along the highway with virtually no setback—a condition widely characteristic of old Pennsylvania towns built before every household owned a set of wheels. Here are the neighboring structures. 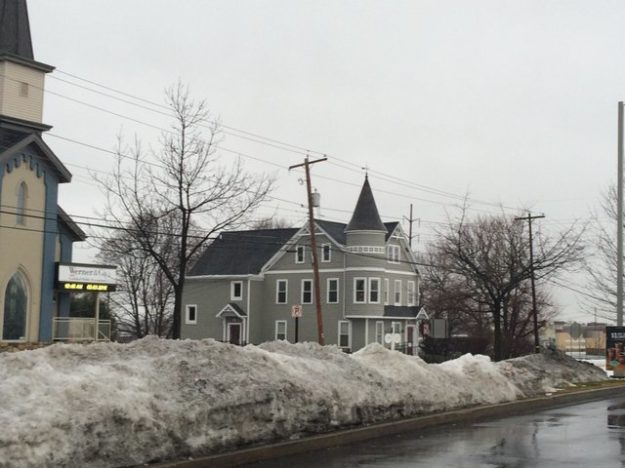 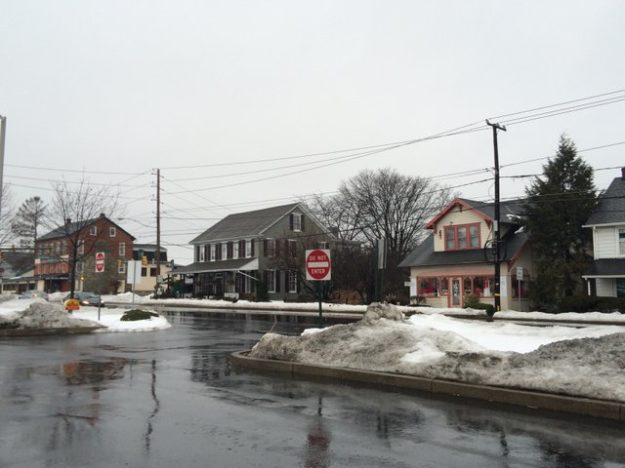 Yet I took these photos in about the most automobile-oriented use imaginable: a gas station. 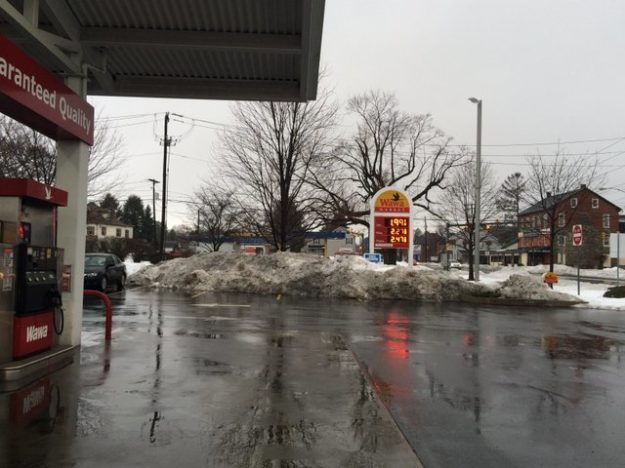 The area is changing, and conventional uses don’t always fit in their conventional buildings as well as they did in the previous century. Village churches have often failed to adapt with the times, so they often literally die out.

What would prompt a certified public accountant to move into an old church? Well, why not? After the congregation departed, the church leadership most likely deconsecrated the space, essentially divesting it of the theological or denominational strictures that previously constrained it. Without reviewing the map, chances are strong that the zoning is something along the lines of “Village Commercial” or “Mixed Use”, so the new owner might not have needed to seek any rezonings or variances. And at this point, it’s a novelty and a cool space that might distinguish the “Werner and Co.” name from any competition. Historic preservation and adaptive re-use are très chic right now, especially among equally trendy niche industries, like microbreweries and distilleries.  Meanwhile, service-oriented uses—the accountants, law firms, insurance agencies—are among the most versatile. They can inhabit a conventional office building, a refurbished old home, a main street storefront. Or a church. I’d imagine this partnership was a real success for both the remaining members of the congregation (who didn’t want to see their old building face the wrecking ball), the local preservation advocates (ditto), the municipality (which witnessed a formerly tax-exempt property shift to a for-profit use) and the accountant (“see, even we can be cool!”).

As the struggling denominations face continued decline or the inability to maintain their old buildings, we can expect to witness an exponential growth of repurposed churches in the decades ahead. Beyond that, the future looks murky, since the more recent generation of new church construction usually emphasizes size, carrying capacity and adaptability for more growth, at the expense of architectural or aesthetic interest. So, if the average megachurch three miles down the road faces closure, who’s going to buy it? It’s clearly too big for Werner and Company. Maybe Ernst and Young?

4 thoughts on “Who needs Vegas for quirky chapels? The rest of the country is holding its own.”