I don’t always single out those times when American Dirt gets outside media coverage, but this one was germane enough that I figured it was worth it. Cleveland-area news and NBC affiliate WKYC contacted me a few weeks ago about an article I wrote back in early 2013, featuring the quiet halls of Concourse D of Cleveland-Hopkins International Airport (CLE).  WKYC wanted to use some American Dirt photography, and they featured my images of the Concourse in both an article and a story on the 11pm newscast on November 14.  The link to both is available here.

Built in the late 1990s when the airport and its hub, Continental Airlines, were flourishing, Concourse D enjoyed moderately heavy use for less than a decade. At the time of its construction, Continental comprised about two-thirds of flights out of CLE. But amidst the great upheaval of the airline industry after 9/11, mergers forced numerous airlines to downgrade their hubs in Midwestern second-tier cities, thereby placing more emphasis on the mother of them, O’Hare in Chicago (ORD). In 2010, Continental Airlines merged with United, almost immediately. The news afforded a mixed blessing to Clevelanders. While the merger almost immediately relegated CLE to a lower stratum among Midwestern airports, it did allow a diversity of airlines to enter the previously cornered market, including some budget ones, which ultimately helped lower costs at an airport that formerly suffered the reputation of among the highest average fares in the country.

The photos below—among several that WKYC used for its article—reveal Concourse D in its final stages of life. 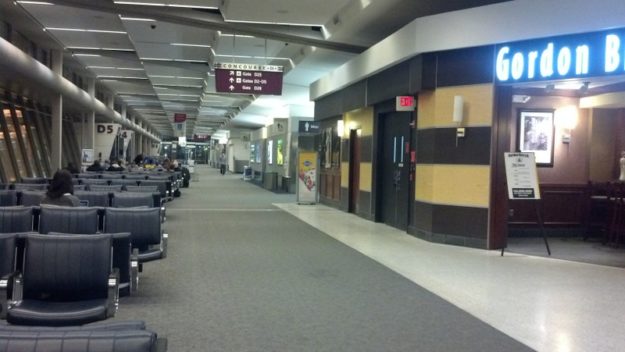 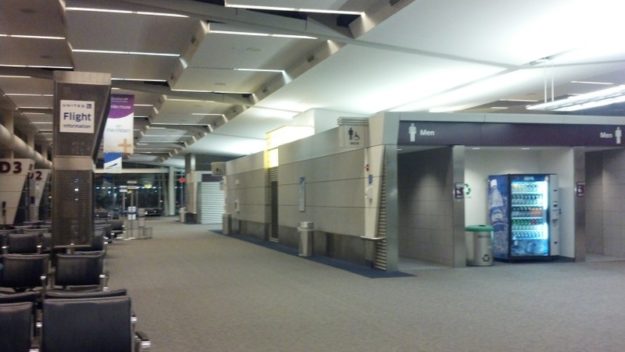 On New Years Day of 2013, when I took these photos, the concourse was still open, albeit barely used. After United and Continental Airlines completed their merger, the new United “dehubbed” CLE. And, by June of 2014, it shuttered Concourse D completely, even though United’s lease continues until 2027, to the tune of $1.1M a month.

The WKYC article focuses on the aftermath of this closure (that it refers to as “Terminal D”), which boasts a new dimension of irony, because the City of Cleveland is still making money off of the shuttered facility. That’s right: the city government owns and manages CLE, a condition only characteristic of a handful of airports. And United continued its lease on the concourse despite not actually using it, because the airline determined that it’s better to pay the cost of an unused building—thereby shutting out the competition from using the space—rather than to staff it and put the infrastructure to use. 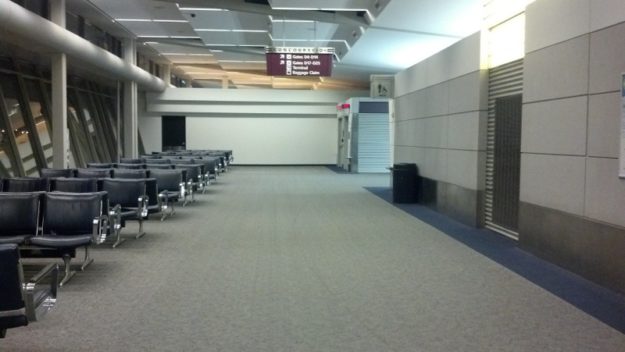 This mild local controversy is hardly unique to Cleveland: other second-tier cities have experienced similar contractions as their airports lose their hubs, with similar “phantom leases” serving to block out the physical presence of potential competitors. According to this article, CLE now only offers direct flights to about fifteen other cities—a paucity compared to its role as a major airport in the 1990s. WKYC turned this predicament into both an article and a video, using photos from my 2013 blog post. On the video, the American Dirt pics of Concourse D right before closure appear at about the 0:40 point.

Concourse D now embodies a huge piece of floundering real estate that the City has no real incentive to revitalize, since, after all, it is still receiving considerable revenue from the lease. Perhaps a local knows better than I do if the City has fully mothballed the facility, or if it is still devoting at least a bit of money to preclude it from falling into disrepair.  But the airport as a whole is not operating at the same scale that it was in 2000; needless to say, the spinoff employment from taxicabs, restaurants, hotels and car rentals has retracted as well.

If the authorities at CLE what to see how other cities have approached this situation, they don’t need to travel outside of their home state of Ohio. Just a couple hundred miles to the southeast, Cincinnati Northern/Kentucky International Airport (CVG) experienced a similar fate to its Concourse C, which opened in 1994 and closed in 2008.  The current status?  Delta airlines (owner of the facility) broke its land lease with CVG.  Now the shuttered concourse faces demolition next year, barely twenty years after construction.  At this pace, regional jet terminals might have a shorter life span than the average chinchilla…or (a more apt analogy) the typical NFL stadium.

PrevLuring us back to the center, by whatever means necessary.
Who needs Vegas for quirky chapels? The rest of the country is holding its own.Next