Sweeping the street, cleaning the corner.

In an otherwise flourishing neighborhood in Jersey City, we encounter what might seem like a bit of a surprise. 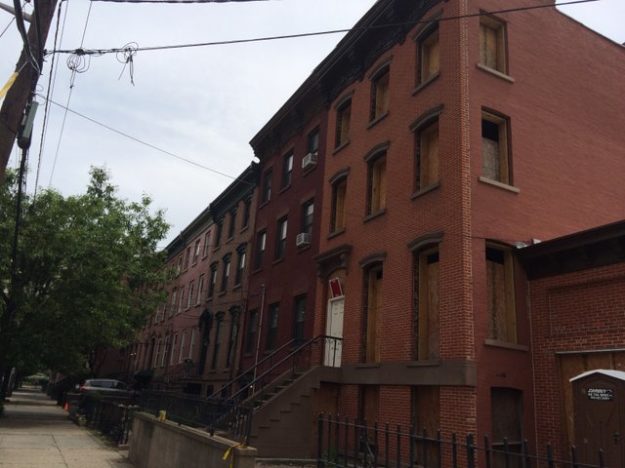 Boarded-up windows? Looks like blight. But notice that port-a-john in the lower right corner. 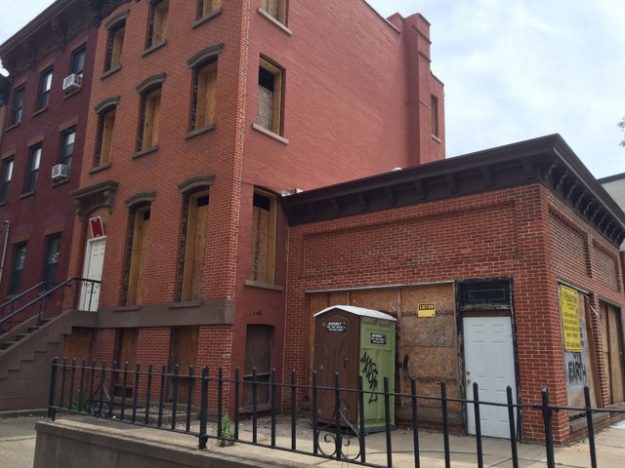 Something’s getting fixed back up. As can be expected among any structure within a mile of this site, demand has only accelerated in recent years for what no doubt has long been an attractive neighborhood, generally referred to as Hamilton Park after the premier green space nearby. It has everything most urbanites would want: well-maintained, sturdy old housing stock, walking distance to PATH stations with direct access to Lower and Midtown Manhattan, a wide variety of both eclectic mom-and-pops and national big-box chains within a square mile, and it virtually fronts the park that gives the neighborhood its name. Here’s a Google Street View from directly across the street from those two photographs.  Unfortunately, the Street View imagery generally fails to capture how vibrant this park is: just one block in size, but densely surrounded by housing and various small shops. But this series of Google Images offers a good enough sense of what’s going on just across the street from these boarded-up buildings.

So it should come as no surprise that an investor has shelled out some money to improve what appears to be a long neglected corner. And it almost seems to be a two-for-one upgrade: the residential building on the left and a low-rise commercial on the right. A quick scan along the exposed side of the commercial building reveals that a renovation is exactly what’s taking place. 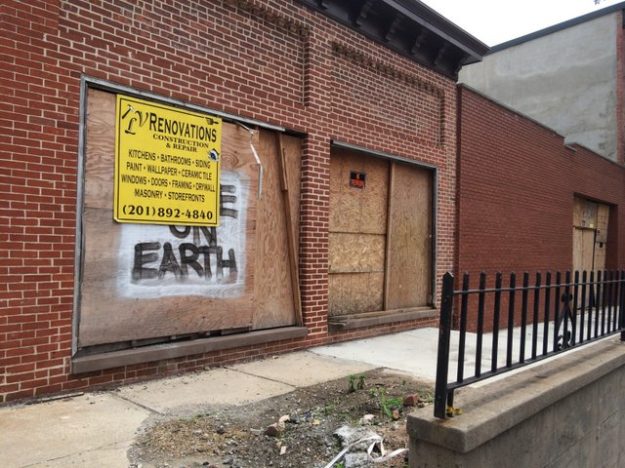 Can anyone blame the property owner? But it’s not just the amenities surrounding the property itself; this squat little building has an extensive patio that envelops it. Here’s one angle: 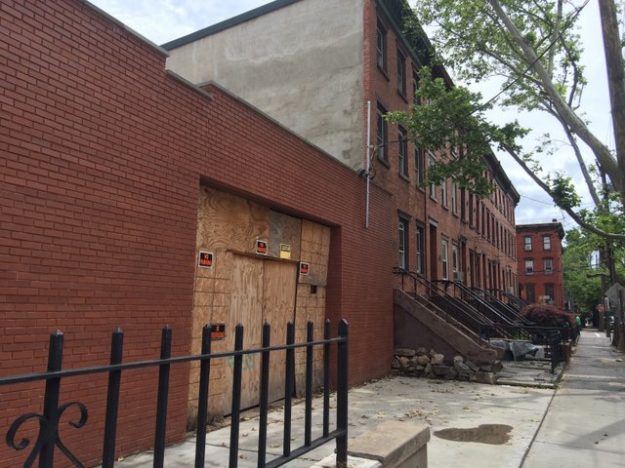 And the deceptively large patio frontage on Erie Street, the smaller and less congested of the two intersecting roads. 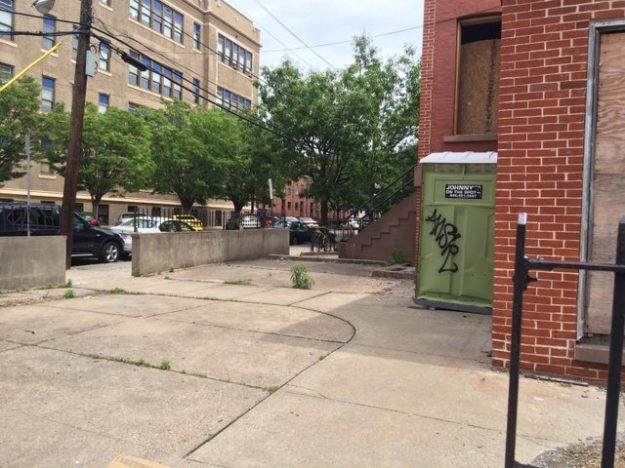 In other words, this site offers a magnificent opportunity for a corner restaurant with abundant space for outdoor seating. Given the strength of the local restaurant scene and the comparative weakness of most other retail outlets, I’d wager that, within a few more months, that’s exactly what we’ll see here. In fact, it’s amazing it’s taken this long for such a redevelopment.

But it may not be quite as simple or straightforward as it seems. Step back in time just a few years from some other Google Street View images, and it’s obvious that this storefront hasn’t been vacant so long.  And it wasn’t a restaurant. In fact, it was one of the most frustratingly difficult uses to promote redevelopment: a dry cleaner. When these operations close, they seldom find new owners quickly, unless it’s another dry cleaner. Several months ago, I blogged about what clearly was a long-vacant old dry cleaner in an otherwise solid old neighborhood in Albany, New York. A real eyesore that probably hadn’t served any true use for years, if not decades. This Jersey City counterpart seems to be enjoying a different outcome, and I doubt it will re-emerge as a yet another dry cleaner—not with that extensive interior construction.

So what is it about dry cleaners that make them, in some respects, what is known as a LULU (Locally Unwanted Land Use)? Much like the corner gas station, it’s all about the negative externalities. The chemicals that surge through dry-cleaning operations are potent and largely abiotic. I personally don’t find the smell of freshly dry cleaned clothes unpleasant, but some do—enough that it may seem like a nuisance that keeps neighbors away. Historically, lax regulations have resulted in little oversight in the handling, processing, and disposal of dry cleaning waste, to the point that most long-running operations suffer varying degrees of ground contamination. In fact, most city economic development agencies regard a shuttered dry cleaning store as a sort of mini-brownfield. While standards of contemporary dry cleaners have improved, there’s a reason we still see such high concentrations in the inner city: the land (at least until recently) was cheap, and the white collar workers pass through the areas between their jobs downtown and their homes in the suburbs. It was quick and convenient to pick up dry cleaning along the way, but keep that nasty stuff out of my backyard!

Notice that, in the older Google Street View of this Hamilton Park street corner, the dry cleaner is fully operative but the adjacent home is shuttered. I have no idea the reason for this, but I can only imagine that the proximity to a dry cleaner seriously undermined its appeal. (At any rate, the 2007 Street View suggests the home was occupied.) It’s a testament to the strength of this section of Jersey City that a developer can afford both the pricey real estate and the extensive environmental remediation of this storefront and still expect a good return. Few other cities can make this claim, so the dry cleaners fold, then sit vacant for years—again, much like that corner gas station, until public or nonprofit dollars subsidize the cost of clean-up. That may be the case here in Jersey City as well, but usually the signage at a construction site will have some reference to the agency responsible for mediation, but there’s no evidence of that here at Hamilton Park. In the meantime, I can’t wait to sit and enjoy a nice outdoor meal from whatever culinary incarnation we see here next summer…and enjoy a nice cool glass of water, straight from the tap.

PrevAs ambition grows, the menus shrink.
MONTAGE: An abandoned building is bad enough. But what about an abandoned campus?Next

6 thoughts on “Sweeping the street, cleaning the corner.”