Along the road to Calvary, a bingo parlor.

I’ve ruminated multiple times on this blog about how we spatialize ourselves through religion—a subject of great interest to me, but one of which I haven’t plumbed any great depths. And this is not the time. I’ll keep it superficial, while at least adding a little texture to the layer.

And here’s that texture: a sidewalk in a tightly knit part of South Philadelphia. 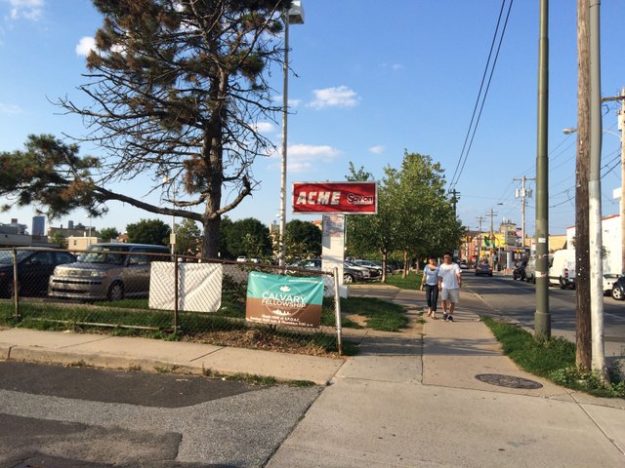 The photo might not convey how urbanized the neighborhood is, since the focal point seems to be a parking lot to an Acme grocery store. But that Acme is the exception rather than the rule; it’s the only big parking area in probably a mile radius. Most of this neighborhood is very dense and pedestrian oriented. So let’s zoom in a bit more to see the real focal point. 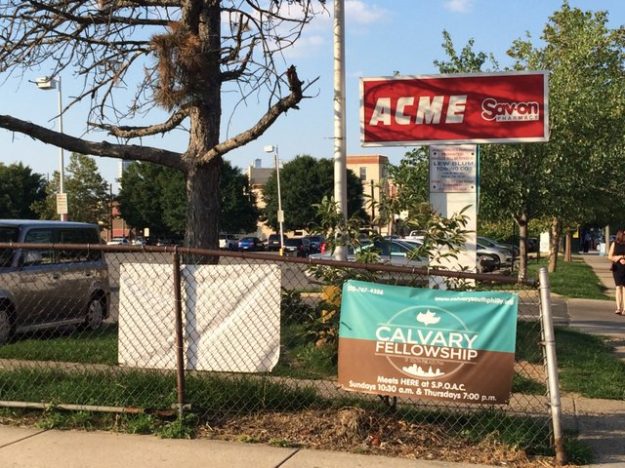 No, it’s not the Acme sign. It’s the banner tied to the chain-link fence. The banner isn’t much smaller than the Acme sign and therefore clearly oriented to attract passers-by moving at a slower pace along the sidewalk, as opposed to speeding cars (obviously—though traffic along East Passyunk Avenue is usually slow enough that they’d probably still make sense of this banner). Regardless of its intended audience, it’s a shrewdly conceived sign: Calvary Fellowship of South Philadelphia, using a clean sans-serif font against a bitotal background. A contemporary church for our postmodern ministerial preferences. And exactly how po-mo is it? Well, it says it “meets HERE at S.P.O.A.C.” So what does that stand for? 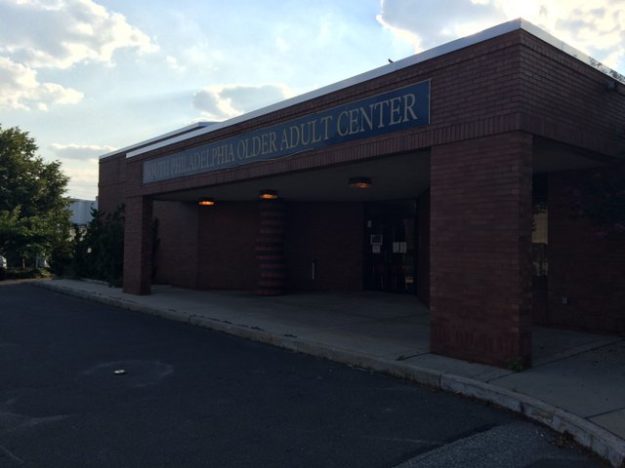 It’s the South Philadelphia Older Adults Center. In other words, an unconventional spot for a church.

For all the publicity we encounter daily on the leviathan houses of worship—the megachurches—we have a humble, stealthy, equally formidable counterpart: a church that refuses to church in a church. Whether it’s in a storefront of a small city, a declining suburban shopping center, or a vacant department store in a dying mall, I’d suspect that storefront churches outnumber megachurches by a ratio of eight to one. They’re microchurches. Usually new. Typically with a membership in the double digits. Sometimes a schism from a larger denomination after key theological differences from the parent church, but typically non-denominational.   And while many microchurches don’t succeed, they could just as likely augur the megachurches of 2025. And the megachurches of today often started twenty years ago first as home churches, then, when they got too big for a living room, as microchurches in humble storefronts.

Calvary Fellowship of South Philadelphia depends on two key anti-establishment concepts: first, a church doesn’t need an overtly churchly building to survive. (And what is a church building, anyway? After all, church architecture has long proven among the most experimental, and some of the megachurches thrive in little more than a warehouse space made of corrugated tin. A “typical church building” is an oxymoron.) Secondly, a church doesn’t even need its own discrete space. It can lease or sublease from another primary use. More often than not, we witness this among grassroots ethnic churches, which pay rent for the right to conduct services in an older (often shrinking) Protestant church building, which serves as a win-win to help the declining church offset costs endured from dwindling offertories. In those cases, like the one I blogged about in northern New Jersey, the conventional Presbyterian/Episcopal/Baptist service takes place at 10am, then the Hispanic Pentecostal services comes in to the sanctuary at noon. Therefore, typically the relationship between lessor and lessee is still church-to-church.

But here’s something I hadn’t seen before: a church making its home in a community center for old folks? The location might be convenient enough: though it lacks parking beyond a service drive (made clear in Google Street View), it proves a convenient, central location within walkable South Philadelphia, and it’s possible the church might negotiate some of the parking spaces with the adjacent Acme, since supermarkets rarely need the entire lot on a Sunday morning. But a partnership with a senior center still seems counterintuitive. Most of these fledgling microchurches overtly seek young people, not only because they often bring children into the worship space, increasing the odds of a growth in membership, but young people will most likely still be alive—and ideally, still supporting the church—as affluent middle-aged people with adult children…children who, in turn, might also remain members.

Yet here the sign indicates that Calvary Fellowship has worked its way into a senior center. How odd. It’s almost like the leadership is trying to mimic an aging Mainline Protestant Church. According to this article, they chose the SPOAC because it was cheap. The pastor, a teacher at the Calvary Christian Academy, is not ordained but saw a need for ministry in an area of great diversity, both culturally and socioeconomically. He and his followers attempt to address senior needs directly through their home at the SPOAC, while using the space to conduct periodic food drives.

But how much can a church that holds its services in a senior center entice the under-60 crowd? The photos at the top of this essay date from the summer of 2015. It does not appear that the website listed on the banner is still active: 403 Forbidden Error. The Facebook page is also down. Could it be that the church’s membership so closely paralleled that of a struggling old Mainline Protestant church that it befell the same fate? I found a glimmer of hope: a larger network of churches, Calvary Chapel Philly, still hosts a weekly Bible study at the South Philadelphia Older Adult Center.  But that’s hardly the same as a church. Otherwise, this may serve as an example that microchurches, like food trucks and antique shops, live and die as readily as any other visions that fail to galvanize a real audience. If only the leadership at Calvary Fellowship put as much strategy in location (location, location) as they did in that smart-looking sign.

4 thoughts on “Along the road to Calvary, a bingo parlor.”