When a business hits the big time, it goes small.

Hot on the heels of my article on a mac ‘n cheese food truck that made it to the major leagues—that is, as a standalone restaurant–I have stumbled across a sign for an eatery that seems to be adopting a similar approach: 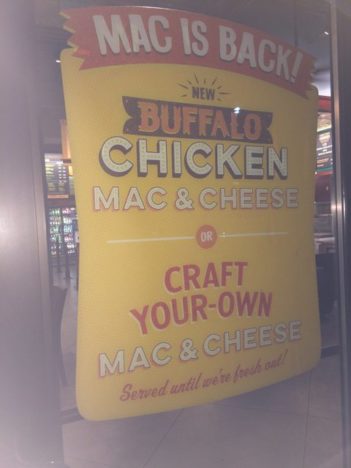 Yes, macaroni and cheese is incredibly en vogue at the moment, so it should come as no surprise that a number of places are likely to jump the bandwagon. A quick glance at the interior of this place, and it might just ring a bell: 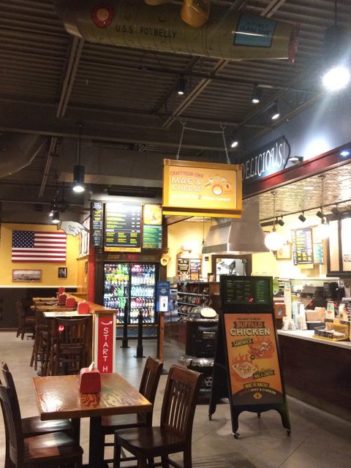 Any guesses? From the prominent counter, the fridge full of drinks, and the crowd control stanchions, it’s obvious this isn’t a table service restaurant. Most likely a fast-casual sort of place. In fact, if your eyes are good enough, you don’t need to rely on clues. The actual name of the establishment is right there near the top. 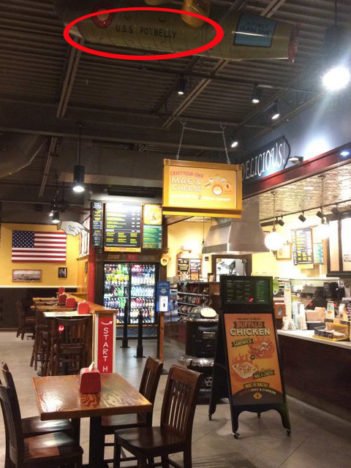 It’s the emergent Chicago-based sandwich chain Potbelly (often mistakenly called Potbelly’s), which has confidently expanded to both coasts in the last decade or so.  While it’s best known for offering custom, toasted sandwiches and salads with a slightly healthier approach than, say, Quizno (a decimated chain, from which Potbelly has risen from its ashes). But, like many national brands facing stiff competition, Potbelly needs to find the niche to distinguish itself from all the other custom sandwich offerings out there, even as it continues to grow its numbers into the hundreds. It doesn’t want to become the next Quizno. Thus, we see it filling a niche that the mom-and-pops (like Mac Mart in Philly) have typically satisfied up to this point.

And Potbelly is even trying the homegrown promotional media, like the ever-popular sandwich board: 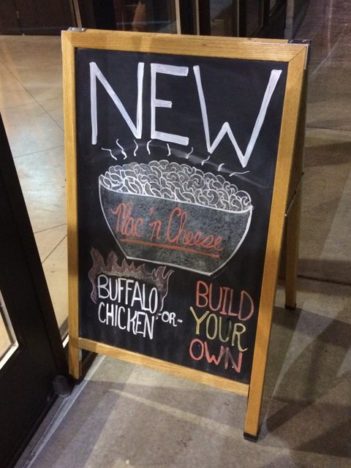 I have noted in the past that chalk is a preferred means of announcing menu items among the local establishments. Unlike the printed signs, which can get costly, the image on a chalkboard isn’t static. And a good chalk artist can provide a tantalizing flourish as the menu changes from day to day. In other words, a sandwich board simply “looks” local, which may largely contribute to its appeal, especially considering that, in the Potbelly location above, it’s not likely to attract many additional customers. Why not? The sidewalk upon which it stands is merely the connective spine to various storefronts in a strip mall, so it abuts a parking lot rather than a city street. This sidewalk doesn’t get any real pedestrian traffic beyond those individuals walking from their car to the entrance. Rather than calling attention to Potbelly, the sandwich board exists to instill a national chain a local feel, in keeping with the hip, “homegrown” featured menu items: a mac ‘n cheese bar.

Why would a chain like Potbelly want to imitate a mom-and-pop? Isn’t it usually the other way around: where ambitious small-scale eateries hope to achieve such widespread appeal that they can grow to national prominence? Well, that’s not the way of things—at least not these days. Recent articles have recognized that restaurants—the most foolproof form of retail at the moment—may soon suffer from oversaturation, to a point that some analysts are predicting a bubble to burst. And the most vulnerable niche could be the fast-casual chain, whose varying incarnations have exploded in recent years, even as the foodies of America remain defiantly loyal to the independent eateries of their respective hometowns. The savvy leadership at Potbelly is trying to inject an element of personalization through chalk and cheese, which may prove the best strategy for the chain to keep its toehold amidst all the other corporate-run options, most of which market their products through mass-produced posters and signs. Will it work? Only time will tell. The Pennsylvania location I visited clearly wasn’t bursting at the seams with customers. But maybe that’s because mac and cheese is already too “played out”. And Potbelly, in order to keep up with the joneses, needs to keep reinventing old-school comfort foods. What’s next: gourmet PBJ?

PrevMONTAGE: An abandoned building is bad enough. But what about an abandoned campus?
A new life for an old campus…where the students cannot leave.Next

4 thoughts on “When a business hits the big time, it goes small.”