As ambition grows, the menus shrink.

The destiny of generally unregulated markets is one of intensifying competition. In an ideal world, these markets spawn a trajectory that impels producers or service providers to innovate so they can achieve that competitive edge. As a result, the consumer reaps the benefit of products and services that continuously improve in quality and efficiency. One might conclude that, in advancing this strategy to its logical apex, entrepreneurs will seek to expand the scope of their business—to offer more things to more people. After all, in achieving ecumenicalism, they maximize their market.

But the world is far from ideal. And, not surprisingly, if a business spreads its operations too thinly, thereby sabotaging its capacity to innovate or to deliver good, efficient results, its clientele will inevitably retract. So, time and again, it seems we the opposite of a broadening business scope. Entrepreneurs hone in on a niche and become more specialized than ever. At the very least, that’s the best explanation I can devise for why we see an ad like this on a street near Rittenhouse Square in Philadelphia: 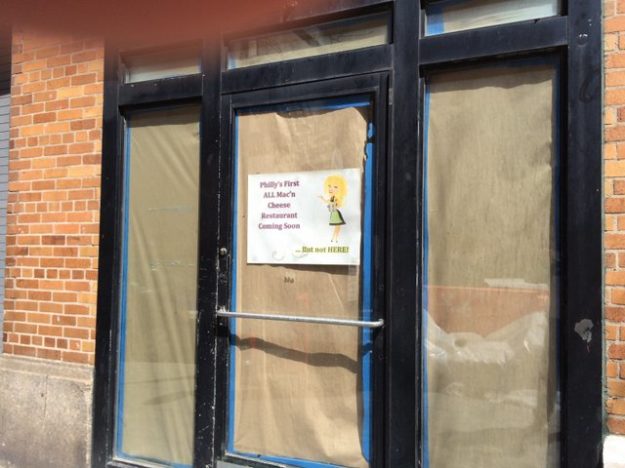 It’s a tiny storefront announcing a new restaurant that specializes exclusively in macaroni and cheese—according to the sign, it’s Philly’s first. And, while it wasn’t yet open when I walked by earlier this year, it looks like it is now: despite the website suggesting otherwise (at least at the time of this posting), the reviews of the bricks-and-mortar location indicate it is fully operative. In most respects, this humble little sign would represent the beginning and the end: a WYSIWYG situation. But zoom in a little further: 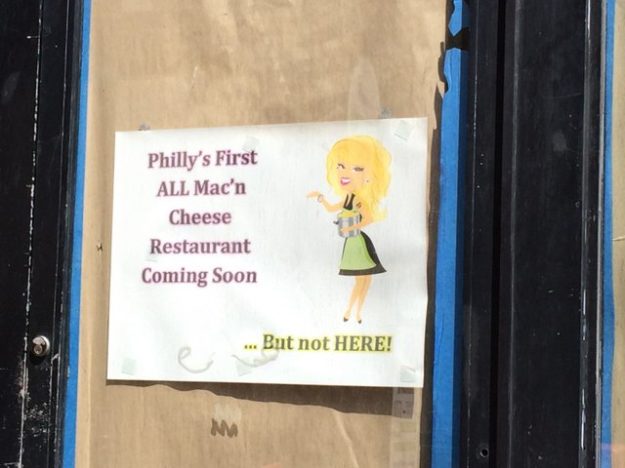 Underneath the cartoon image of the waitress, we see the caveat “BUT NOT HERE!” The sign is a tease, and a ruse. And, true enough, Mac Mart is at 104 S. 18th Street, a few blocks away from this storefront in transition.

As is always the case when we’re treading on American Dirt, WYSIWYG just won’t cut it. There’s always more than meets the eye. If it isn’t obvious enough already, the photos above capture two cultural indicators I suspect will only grow in prominence over the years ahead: the ultra-specialized food provider and the mini-storefront.

It obviously didn’t start with Mac Mart, but restaurants whose selling points are a single product seem to be growing in cachet. Case in point: the grilled cheese sandwich, in which two emergent restaurant concepts (both from Ohio incidentally) are creeping across the Northeast and Midwest: a fast-casual operation called Tom + Chee, and then the more gourmet, alcohol-infused Melt. Coupled with the escalating taste for specialty mac ‘n cheese, it appears some savvy restaurateurs are raking in the dough on food items that the average thirteen-year-old can learn how to make. Heck, we might even trust a college sophomore not to screw up a plate of mac ‘n cheese.

Truth be told, the ultra-specialized restaurant concept is anything but new. Burger joints, pizzerias and chili parlors have operated successfully for decades; the most successful among the latter, Skyline Chili, also has Ohio origins (specifically Cincinnati, the nation’s most chili-centric city), though its geographic range of expansion has been much more modest than, say, Tom + Chee.  And most cities have at least a few dining institutions known for a single item: my hometown has long frequented John’s Famous Stew, and South Philadelphia has enjoyed John’s Roast Pork for eighty years, though only the Philly John can be arsed with a website of his own.

But those greasy spoon establishments have been around forever. What distinguishes them from this new generation of specialized eateries? All of them serve up heaps of what most would label comfort food; hardly haute cuisine. But the old-time vendors had and still retain a distinctively working-class vibe, while the locations and price points of the newer offerings suggest a more moneyed, professional demographic. Mac Mart recently offered deals on bowls of its specialty starting at $10 or more, promoted right before the lunch hour. Nothing wrong with that, and, needless to say, the folks at Mac Mart dish up a variety of creative toppings for their product. However, lunch platters starting at $10 fall outside the realm of affordability for a huge percentage of the population. Meanwhile, at Cleveland-based Melt, the basic grilled cheese currently starts at $5 for a half sandwich.

The best way to reconcile these seemingly stark differences between the cuisine, the clientele, and the pricing is to pry open the beehives. What’s going on in the kitchen, besides ovens full of steamy macaroni? The choice of location may have everything to do with what they serve, what they exclude, and how much they charge for it. How does a newcomer to the Philly restaurant scene find an opening, at a time when eating at local, non-chain establishments has exploded in popularity? What’s the entry point if you don’t have a lot of capital? The obvious answer: keep it small. The leases at tiny storefronts generally cost more than big ones on a per-square-foot basis, but the costs in aggregate are less. And if you strive for a comfy profit margin (and what restaurant owner doesn’t?) the best way is to find an area with high income density, where you can charge more for your product than you typically would in place with low or even moderate density. In Philly, the Rittenhouse Square neighborhood is the motherlode. 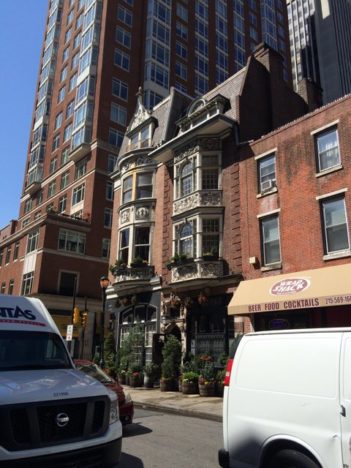 Dense, wealthy, pedestrian-scaled, with 19th century rowhouses juxtaposed with glittery apartment high-rises built in the last 20 years. It’s a great place for culinary innovation…except that the real estate is so pricey. Thus, it’s necessary for those with shallow pockets to start small. However, with tiny spaces, they have little capacity to broaden their menus: little working area for a variety of equipment, let alone refrigerated storage.

The result? Excel at making one item, produce huge amounts of it, save money through those economies of scale, then charge steeply through accessories/toppings. And a Mac Mart is born! It should come as no surprise that, like many of these one-trick-pony diners, Mac Mart started as a food truck. And food trucks (though ubiquitous in Philly long before they became a fad) have proven an optimal way of distilling the restaurant experience, giving capital-shy start-ups the chance to disseminate a few items prepared really well in tiny, economical spaces, then sold at swelling prices that capitalize on the niche appeal.

To be fair, most of the aforementioned restaurants have broadened their horizons in proportion to their success (and their expanding work space). Tom + Chee has always encouraged its customers to pair the sandwich with a soup; Melt offers soups and salads and still promotes itself as a beer bar; Mac Mart seems to be teasing its customers with grilled cheese as well. But all these places still rely overwhelmingly on a single food item to carry the brand. In many ways, these successful operators hope to achieve for their respective foot item what has already largely taken place among pizzas and hamburgers: the pizza/burger is merely a platform for other ingredients, where the true innovation can take place. Maybe someday, every small towns in America will enjoy its own signature mac ‘n cheese bar.

While the aforementioned restaurants have begun to stray from their ultra-specialized roots, other purveyors remain rigidly one-note, again under the aegis of the small storefront. Most major American cities now offer oil-and-vinegar bars, but they often involve a variety of derivatives: olive, palm, truffle, and so forth. Huge gustatory differences. But then there are mini-shops devoted not just to condiments in general, but one in particular. Not surprisingly, Manhattan offers some of the most brazen efforts to capitalize on microretail: as I blogged a few months ago, for many small business owners, that’s all they can afford…or, more importantly, that’s all the space they need.  On the same street as the luxury French jeweler Gas Bijoux is a slightly larger French import called Maille, focusing almost exclusively on varieties of mustard. (Yes, it also offers vinegars and cornichons, but really, it is first and foremost a mustard-seller, with copious samples coming out of pumps.)

What’s next: peppercorn palace? Nothing but horseradish? For those who think such decadence could only take place in Manhattan, London, or Central Paris (the primary locations of Maille “boutiques”), it should come as no surprise that Brooklyn is giving its neighboring borough a run for its money. Empire Mayonnaise Company elicited equal measures of acclaim and derision when it opened a few years ago, coupled with enough good-spirited mockery to generate a Saturday Night Live skit. Alas, earlier this year, after four years of sustaining the Prospect Heights neighborhood through $8 jars, Empire closed. According to the owners, the prices were rising steeply and the 300-square-foot shop was getting too small for what they wanted to do with all that creamy goodness. So they’re looking for the next chapter. In the meantime, their artisanal product—like the mustard at Maille—is available online. And the ever-mounting online retail culture may be a godsend for other impecunious small business owners looking to get in on the game, but it could signal the death knell for the cornershop. And, with a growing diversity of apps available like Postmates, Seamless, or even UberEats, even restaurants—currently among the few stalwarts in the faltering retail world—may be a thing of the past. No dining space; all the restaurateurs need is a kitchen. Even Cheesecake factory could operate out of a small shop. Or a food truck.

PrevPicking the nits when we’re stuck in a rut.
Sweeping the street, cleaning the corner.Next

6 thoughts on “As ambition grows, the menus shrink.”