A new spin in an old city.

I snapped a bunch of photos of downtown Newark during my last visit earlier this spring, and while the experience will probably churn out several more substantive posts, I want to start with a small one that may soon exceed its shelf life. Back in April, a branch of the fast-casual restaurant chain Qdoba was awaiting its grand opening, with an entrance on Halsey Street, a modestly-scaled commercial corridor just one block west of Newark’s primary north-south downtown arterial. 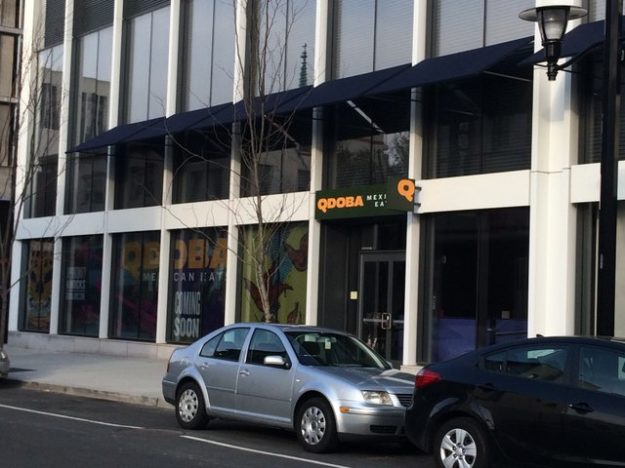 At the time, it was the first I had ever seen this new look for the nation’s challenger fast-casual burrito chain (owned by parent Jack in the Box), which apparently captures the ethos that the company hopes to carry across its entire brand, as it closes in on stumbling front-runner Chipotle.  The logo I had associated with the brand until recently looked more like this location.

Nothing too remarkable about this, except for one thing: Qdoba has chosen to pilot its new logo in Newark. Newark, for godssakes. Nothing against Newark, really—even though it has always lurked in the shadows of New York City, Newark benefits from all the sociological and architectural ingredients that one might expect to see in a fully autonomous urban entity. But Newark also, as just about everyone knows, has suffered tremendous hardship through deindustrialization and social unrest. Even though the commercial nucleus of the country sits less than 10 miles away, Newark remains one of the poorest big cities in the country.

Which begs the question: why would Qdoba showcase its new look in an economically challenged market like Newark? It doesn’t seem logical in light of what I observed in another northern New Jersey suburb. Several months ago, I noted how the Bridgewater Commons, a generally successful upscale mall in a comfortable outer NYC community, seemed to be snagging all the brands that are seeking a reboot. The examples I referenced—Aéropostale and White Barn—aren’t exactly top-flight names. White Barn has only recently re-emerged from a decade-long hibernation. Meanwhile, Aéropostale declared bankruptcy early this spring, and two major mall operators have partnered to purchase the brand, salvaging its presence at about 400 locations. Regardless of these two retailers’ fortunes, it made sense to me that they were pioneering their new brand at affluent, prosperous malls, rather than more questionable locations. After all, consumers at a mall like Bridgewater Commons are, thanks in part to their deep pockets, are likely to recognize nuanced changes in brands…and more likely to react to the ones that leave a favorable impression.

Yet here, after seeing the reboot of White Barn and Aéropostale in a fancy mall, we witness a larger and more successful chain reinvent itself in downtown Newark. 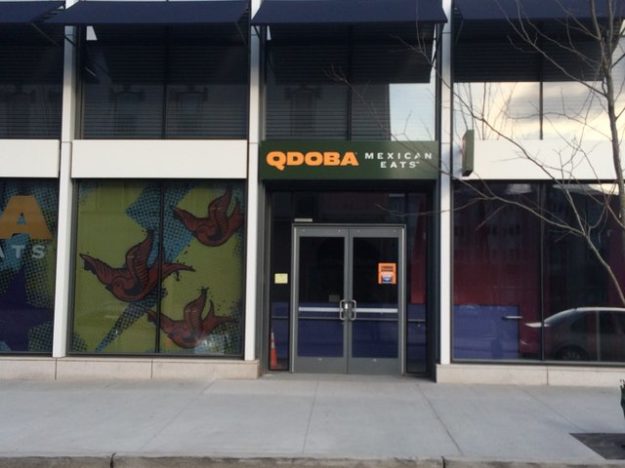 What’s the rationale? Far more than just the logo has changed. According to the Fast Company article linked earlier, the logo merely signals an evolution in Qdoba’s gestalt. The interior layout has morphed, assuming the customized look akin to Starbucks; no two locations will be identical. The interior designers have jettisoned sombreros or other clichéd Mexican bric-a-brac in favor of more idiosyncratic street culture. The menu structuring has shifted, offering more free add-ons. Uniforms are more personalized to what each employee prefers among multiple options. It’s even changed its full name from “Qdoba Mexican Grill” to “Qdoba Mexican Eats”. The visual cues seem to be morphing into something less accessible: a bit subtler and more “insider”. Via Google Street View, here’s the old logo (the “Mexican Grill” motif, in a familiar suburban setting.  Before long, the logo in this Street View will be a thing of the past. All in all, Qdoba appears to be eschewing the mass-market corporate look, at the same time that it seeks to expand its brand and, therefore, to build revenue, as corporations are wont to do.

Does that explain why downtown Newark is such an attractive place to roll out the new brand? 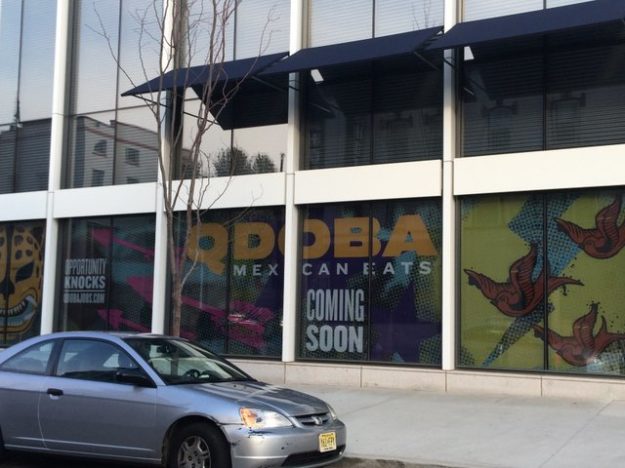 It is, after all, very urban. And, if anything, it seems like the second-biggest burrito chain is jumping on the hipster bandwagon, which, inevitably, means Qdoba will repudiate its the soccer-mom friendly approach that it had adopted up to this point—much the same way hipsters malign any association with middlebrow suburbia. That’s not to say the new look won’t eventually take over the burbs, but that will no doubt serve as “Phase 2” in the rebranding. I just visited the site referenced in the Google Street View above, which, as of mid-September 2016, continues to deploy the old logo and “Mexican Grill”.

But why make Newark such an early recipient for the new brand? Why not a city with more cachet and less of a reputation for prolonged economic struggle? And, for that matter, why the comparatively obscure Halsey Street, which receives relatively little traffic and only reveals the earliest stages of an economic revival? Here’s the view across the street as an example: 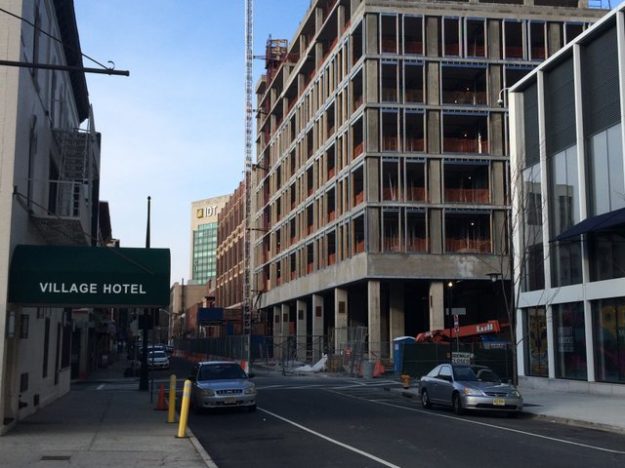 And just a block or down further down the road: 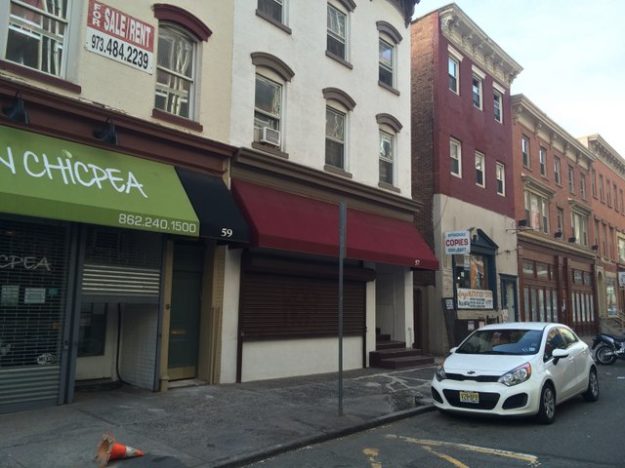 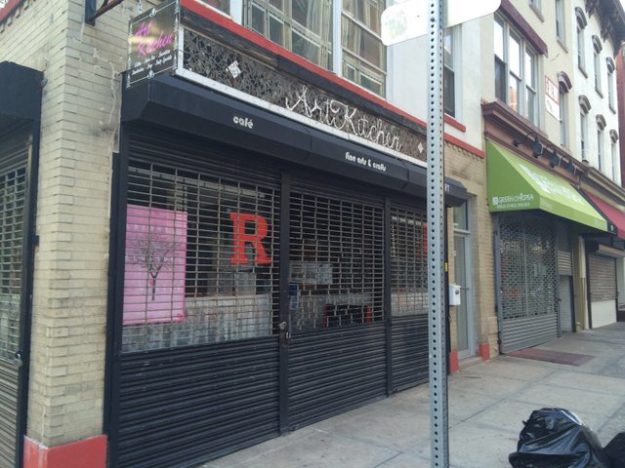 It’s still pretty deserted on a Sunday afternoon, especially compared to Broad Street nearby, which looks more like this: 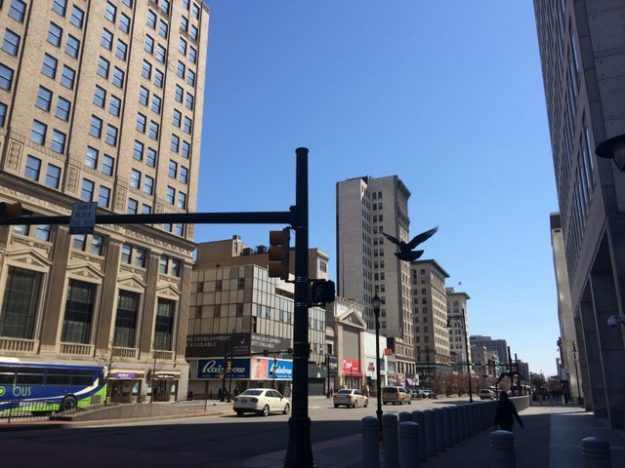 Not too lively either, but at least it’s clearly a high-profile street.

Everything about Newark seems to suggest that it’s re-emerging, at best. But again, perhaps that’s the point of embracing the hipster ethos, which is often tantamount to capitalizing on long-depressed real estate. Neither Aéropostale nor White Barn demonstrates any real effort to appeal to hipsters, so they wisely play up their greatest strength: already successful suburban malls, the epicenter of their rebranding. Additionally, bricks-and-mortar retail—particularly clothiers—has suffered considerably in the era of online shopping, while the restaurant scene has boomed, growing increasingly competitive as their patrons show a burgeoning savvy toward branding, pricing and ingredients. By shirking the malls, Qdoba seems headed in the opposite direction from Aéropostale and White Barn. And Newark, in that regard, may prove the best next move: it still claims a cheaper cost of living than anywhere else around it, it boasts easy access through the Port Authority Trans Hudson (PATH) rail line to Midtown and Lower Manhattan, and it has plenty of affordable, underutilized buildings. As the cities closest to Manhattan fully gentrify (particularly Hoboken and Jersey City), Newark may prove the next hub for impecunious, artsy pioneers. In some regards, it already has that reputation, and thanks to the high concentration of prominent office jobs, downtown Newark can boast a high-income density during the working day. There’s enough going on in this formerly lifeless downtown to encourage upscale grocery Whole Foods to open its first location at a new apartment building nearby. 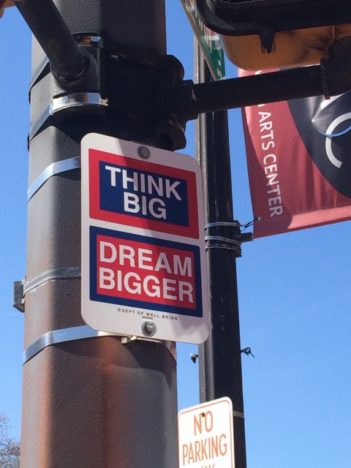 In other words, Qdoba is hoping to remain ahead of the curve. Expanding in an untried market like downtown Newark will nearly always strike investors as a riskier venture than a suburban stalwart like a high-performing mall. Its top competitor, Chipotle, established its street cred several years through industrial chic that evokes a newly minted gastropub in a vintage building in an old, revived downtown. And Chipotle carried that aesthetic to all 2,000 of its locations—urban and suburban—resulting in a tsunami of profit when the brand peaked in late 2014, before the E. coli controversy. Now Chipotle is floundering, so Qdoba has stepped up its game to seize part of that market. 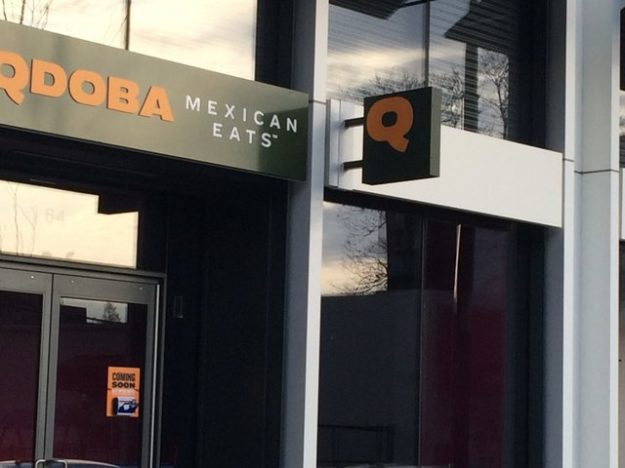 As is always the case, all of my speculations could prove dead wrong. The announcement of Qdoba’s reboot came nearly a year ago, so I may already be showing how passé my observations are: the Newark Qdoba may not be among the earliest prototypes. It’s possible it’s the thirtieth, which would hardly make it as risky of a venture. Additionally, the decision to implement the new brand at this location (which had not quite yet opened in April) may simply be a fiat carried forward to all locations from this point onward. That is, all new Qdobas will adapt to the new brand, urban or suburban. Since these Newark photos, I’ve seen a fully operative Qdoba with the new look in a Philadelphia suburb, though I couldn’t determine whether it was a recently opened or previously existing location.

Regardless of the forces shaping this rebranding, the visible results suggest that all sorts of milieus can prove fertile ground for testing a new concept—it just depends on what the concept is. Not exactly a very ambitious conclusion on my part, but if, in six months, I find new evidence to disprove this conclusion, I’ll eat my words and start with a new approach. Kind of like how Aéropostale, White Barn and Qdoba have chosen to reboot—though my bets are that only one has a bright future ahead. And it just opened a location in downtown Newark…of all places.

PrevT e d i u m: dead malls morph to artistic frontiers.
Picking the nits when we’re stuck in a rut.Next