Downtown revitalization: when every silver bullet proves nothing more than a blank.

By this point, it isn’t just the major metropolises—the big coastal hubs—that have sewn the seeds for a renewed and seemingly enduring interest in our town centers. The little kids have joined in on the fun of downtown revitalization too: not just the smaller cities but even rural towns. Suburbs are getting in the game as well. Even those that boomed after the Second World War (which is most of them) are witnessing a construction boom at their core, which, in some cases involves the fabrication of a made-from-scratch downtown that historically never existed.

So the downtown revitalization game isn’t pitting east against west, north versus south, big versus small. It’s really more a matter of yea versus nay: those that have manifested a clear resurgence in activity versus those that haven’t. As interesting as each downtown revitalization case may be, those cities whose downtowns seem resilient to a renaissance merit exploration as well. 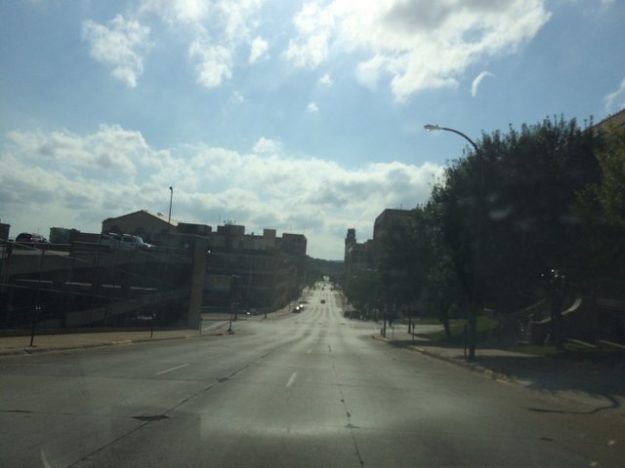 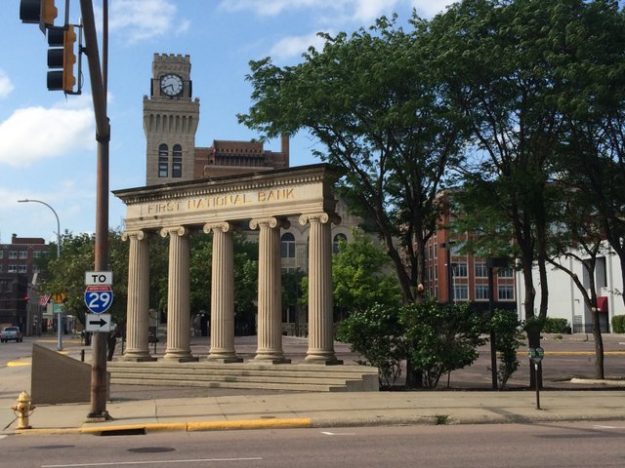 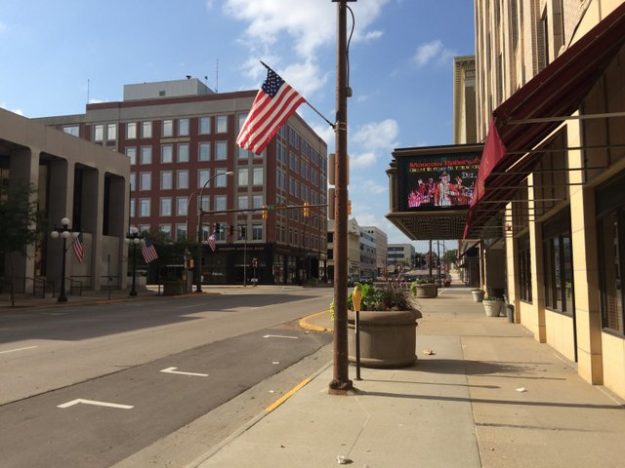 Sioux City, the fourth largest city in Iowa, does not yet appear on the verge of a comeback. Sundays are rarely the best day of the week to judge a downtown’s overall activity level, so maybe if I had visited on a Saturday evening or even Tuesday afternoon during the work week, I would have seen more promising evidence. But the occupancy level of the storefronts and the cars parked along street suggest that downtown never really enjoys much life.

A walk along the downtown streets offers only the vaguest hints of reinvestment, nearly all of which seem to have fizzled. Take, for instance this mighty edifice—one of the largest in this city of about 82,000. 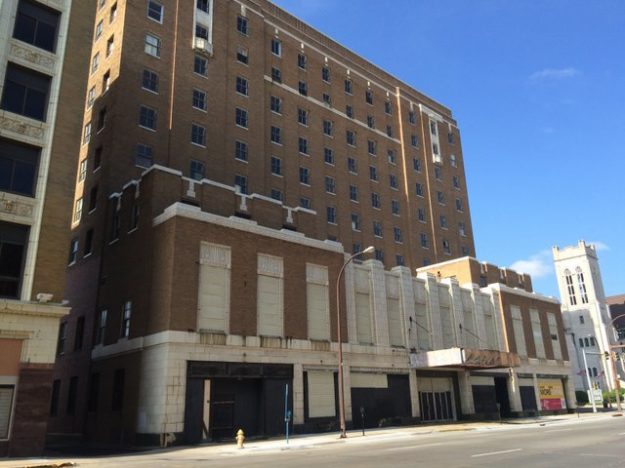 The Warrior, at one time the city’s premier hotel, has sat vacant for forty years. Meanwhile, its neighbor is in only marginally better condition: 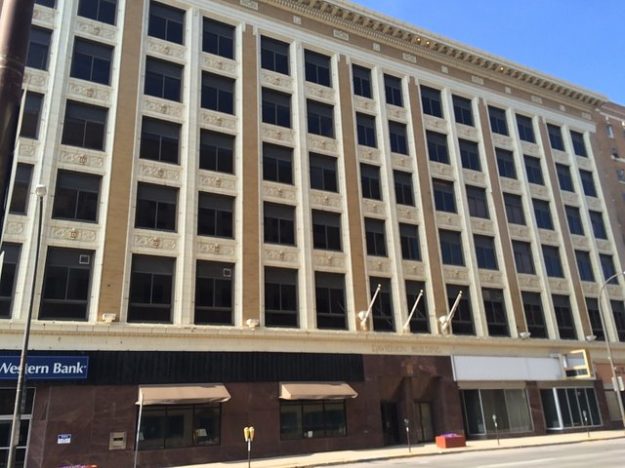 The century-old Davidson Building isn’t completely abandoned: at least a portion of its first-floor retail survives in the form of a Japanese restaurant and bank. But that paper over the entrance doorways, directly below “Davidson Building”, hint at the dire state of the five upper levels. Various proposals for restoring the two structures have flopped. Among the highest profile was an effort by Ho-Chunk Inc. to transform the two structures into a sizable Warrior Casino and Hotel.  However, the state awarded a gaming license to a rival project, the Hard Rock Hotel and Casino, which stands just outside the historic city center, in an overwhelmingly automobile-oriented configuration, seen below: 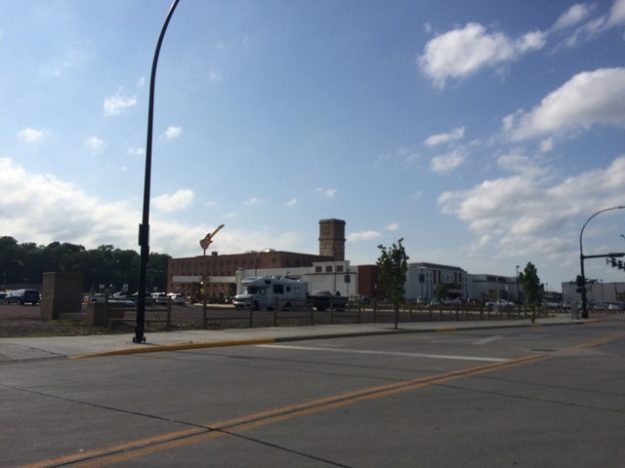 If that doesn’t show much, try this Google Street View photo.   Meanwhile, the Warrior Building harbors the telltale signs of speculation fueled by the housing boom… 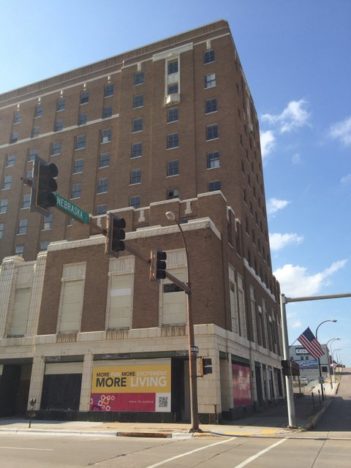 But the faded signs at the corner of the building, auguring a redevelopment, seem far more likely to evoke exciting plans a different market cycle, prior to the housing bust. Call me cynical, but they don’t look new. And Google Street View reliably confirms that they date to at least June 2012 (though apparently not as old as June 2009). A “coming soon” sign that doesn’t change for four years usually betrays itself after two.

Another characteristic of Sioux City’s downtown that stunts its renaissance is the widely visible dependence on skyways. They’re everywhere. 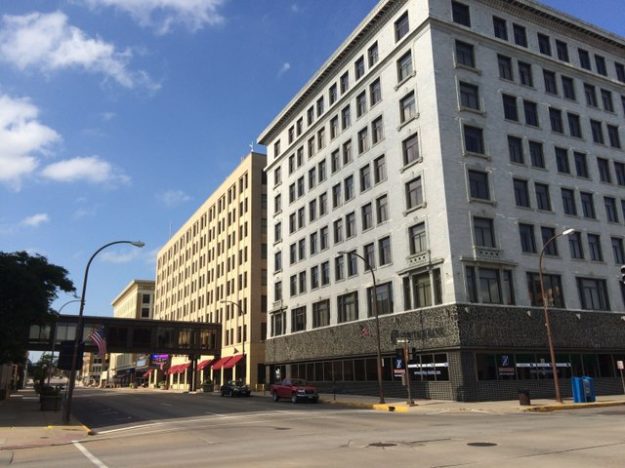 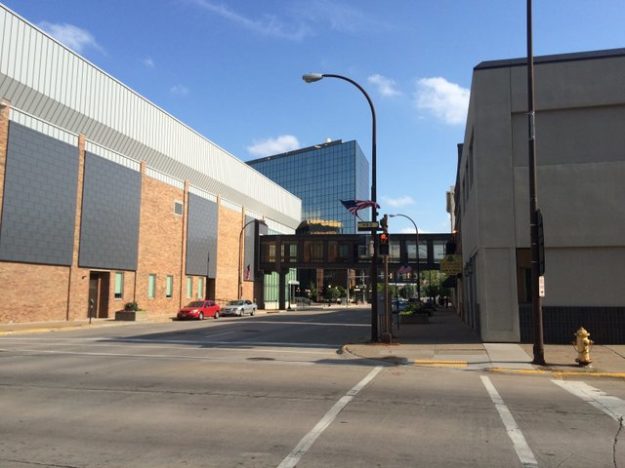 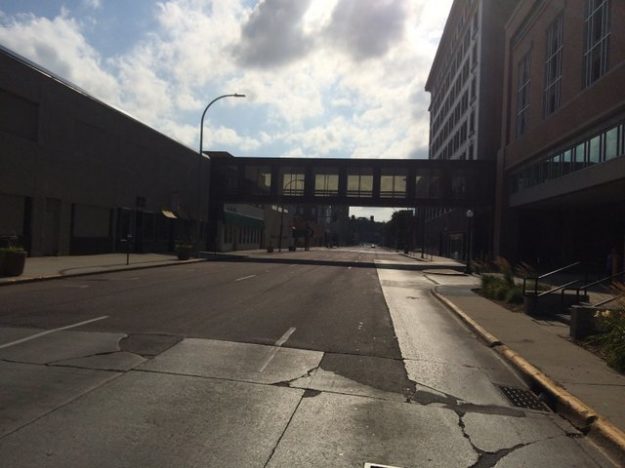 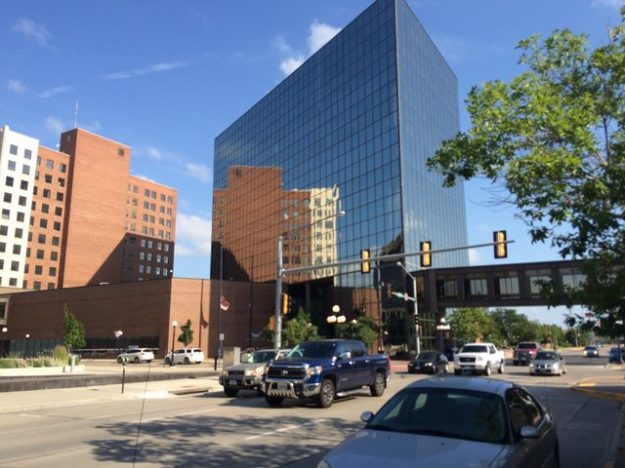 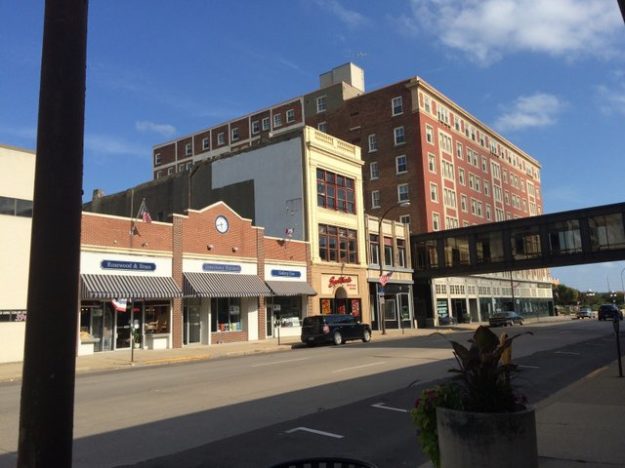 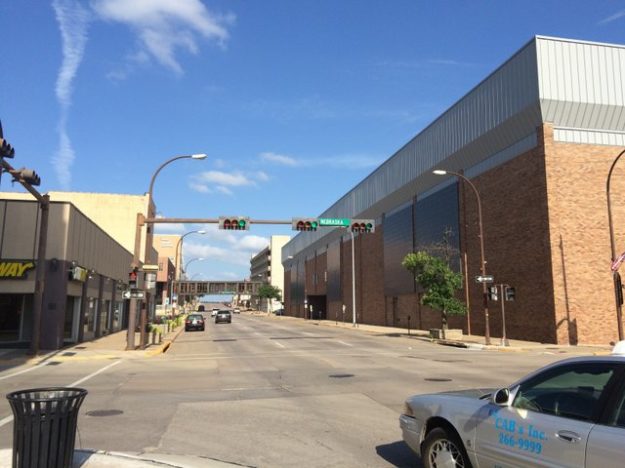 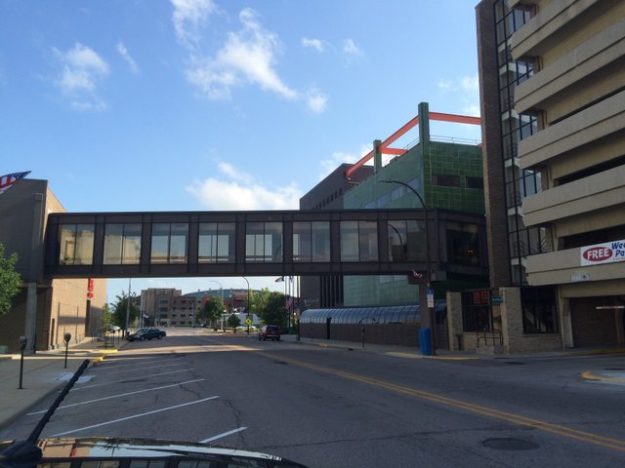 And these are just the ones I captured.  (My apologies if I’m showing a few of them twice; it was hard to distinguish them all.) It has become a kneejerk response among city planners to impugn the skyway’s ability to rejuvenate downtowns, primarily because it so effectively sequesters people from a downtown’s street scene, ensconcing them instead in climate-controlled funnels as they migrate from one office building to the next. While it’s true that skyways rarely impart a positive effect on downtown revitalization, they’re prevalent in many northern cities. Sioux City hardly seems like a frostbitten environment in July, when the afternoon temperatures easily surpass 90 degrees, but Jack Frost blows a mean chill over Siouxland almost every winter. Most Midwestern cities have their fair share of skyways, yet some of them still boast lively downtowns. But, while the skyways may have helped stave off some of the exodus of office jobs during the downtowns’ nadir in the 1970s, cities today typically succeed in spite of the skyways, not because of them.

What else? This may not be as strong of an argument, but like so many cities in the country, Sioux City has a reasonably new transportation center, which no doubt intends to improve the visibility and boost ridership on what historically has been the lifeblood of transit systems: the congested commute from the suburbs to downtown. 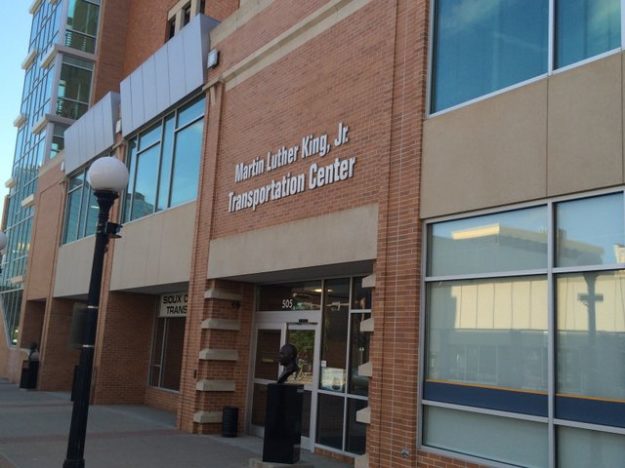 I commend the inclusion of retail space on the first floor; theoretically, it should be a perfect site for convenience-based food and quick services. But it doesn’t seem to be having much of an impact: 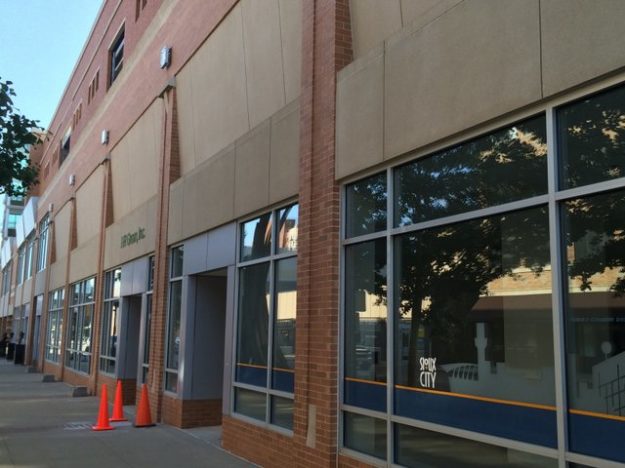 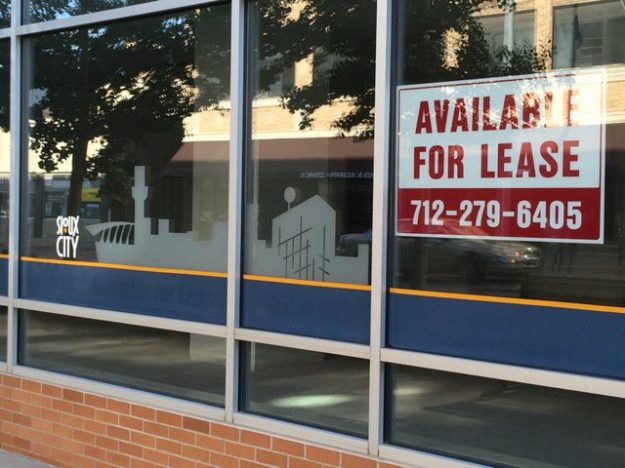 The near-complete absence of tenants on the first floor suggests one of two conditions: either the center’s key tenants can only flourish by leasing space in the interior (which was closed on a Sunday afternoon), or the facility has remained largely vacant due to a lack of use in aggregate, which is generally tantamount to meager transit ridership in general.

Unfortunately, it appears that the Sioux City leadership pursuing a downtown revitalization has placed most of its irons in a different fire: the automobile-oriented development wedged between downtown and Interstate 29—the area that hosts the aforementioned Hard Rock Hotel and Casino, as well as some other high-intensity uses: 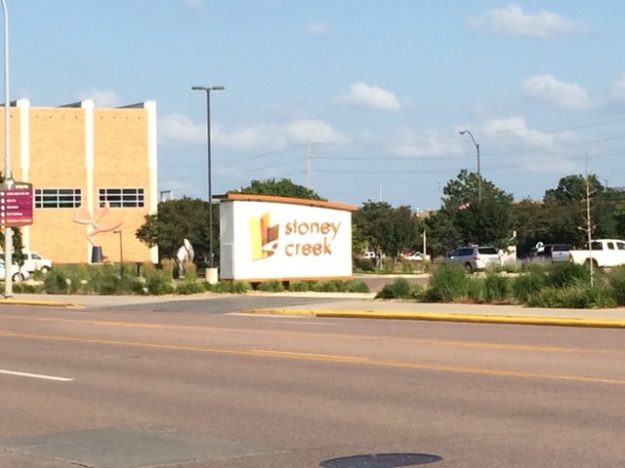 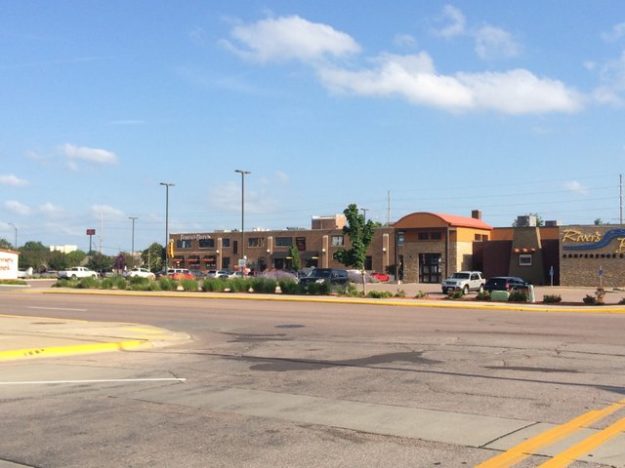 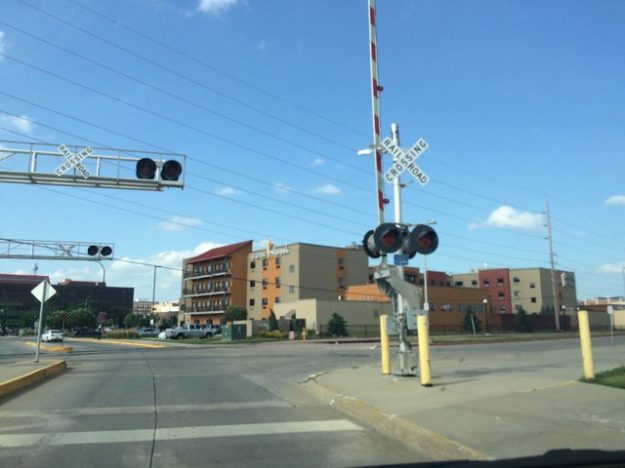 Tyson Events Center. Stoney Creek Hotel and Conference Center. Promenade Cinema 14. June E. Nylen Cancer Center. Holiday Inn. Ramada. Nearly all of the visible land development has taken place south of Fourth Street, though the lion’s share of downtown’s historic architecture is north. It’s almost as though the city leaders decided to call it quit on the old downtown, only to pick up and start anew a quarter mile closer to the freeway. And all the new construction offers abundant parking on-site: no need for people to get around and stroll around to see what else the downtown revitalization has to offer. Among the few visible investments north of Fourth include the aforementioned the transit center, as well as this large complex: 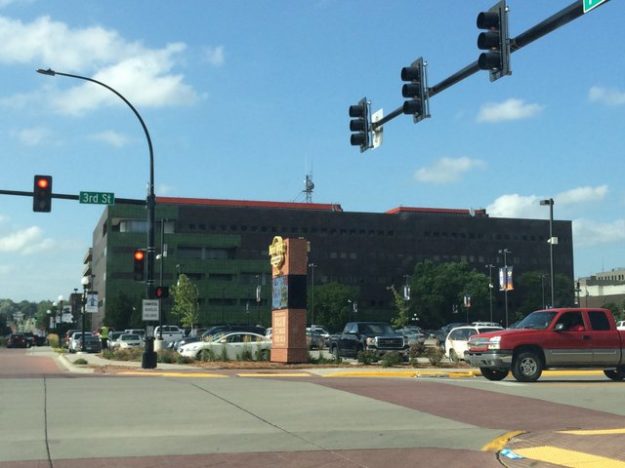 It’s the headquarters for MidAmerican Energy, and, by my metric, it’s not an unattractive contemporary building. But the entrance, seen here, reveals absolutely no real effort to engage with the streetscape. Meanwhile, a few blocks east, the city’s convention center boldly forced a curvy rerouting of a two-block segment of Fourth Street, yet it doesn’t seem to be delivering the results that civic leaders anticipated: Hilton recently pulled out of the adjacent hotel (connected by yet another skyway), leaving the much lower-grade Howard Johnson as the replacement tenant in its wake.

What’s left are a series of magnificent institutional structures and early 20th century office/warehouse buildings that seldom coalesce into a downtown with a functional identity. 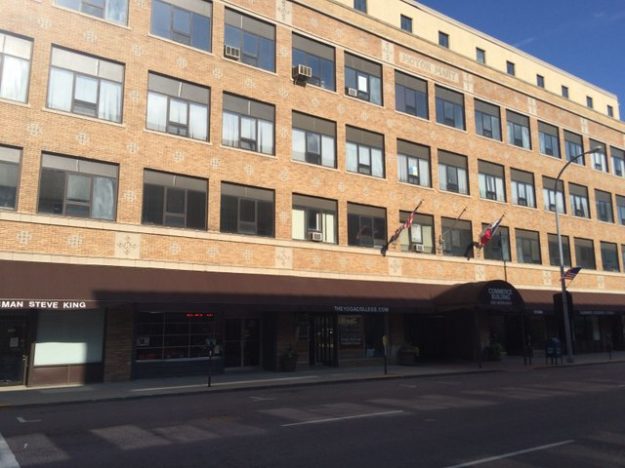 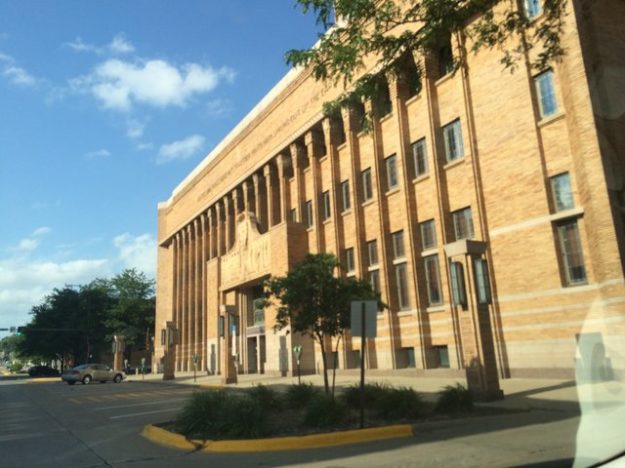 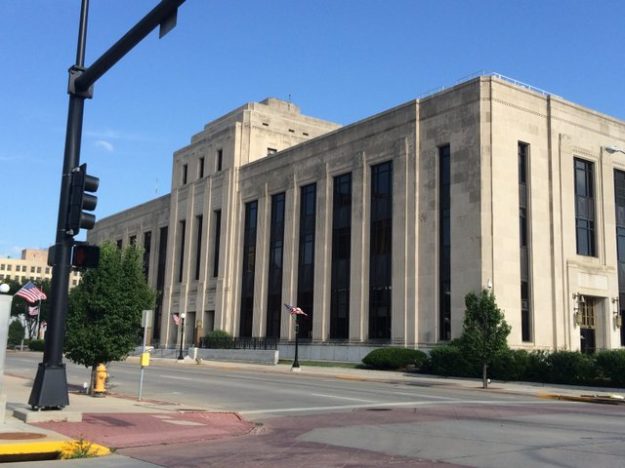 Among the few areas in which the buildings allow some sort of consistent interplay with the sidewalk is a two-block stretch of Fourth Street east of the convention center.  Patchy though this area may be, it offers a couple of the idiosyncratic eateries and drinkeries that typically spawn renewed interest in downtowns. But only a couple. At this point, most of the tenants appear to be law offices, real estate, beauty clinics—the sort of service-oriented businesses that may thrive on storefront visibility but don’t depend on it the way restaurants and retail do. 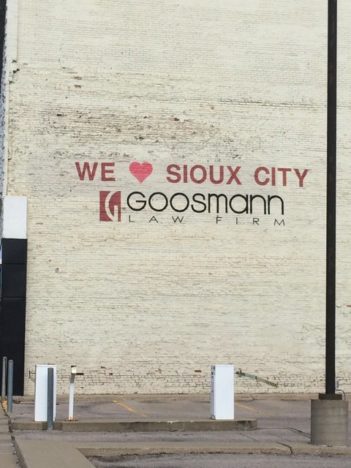 I feel like this is one of my most cynical blog posts in quite some time—that I’m being unremittingly cruel in my exploration of a city I barely know, pointing out and attempting to connect the dots through all these negative visual indicators.   The fact is, Sioux City may simply have experienced the entire urban degradation—and its anticipated downtown revitalization—at a later pace than many other cities. Both the city and the surrounding Woodbury County have lost population in recent years, suggesting that the decline extends beyond the city limits to the region as a whole. However, population loss only began in the late 1960s—later than a lot of places, and it has been comparative modest: Sioux City of 2010 was only off about 8% from the 1960 peak. Downtown also still boasted two long-term, freestanding department stores (J.C. Penney and Younkers) until the 2000s. Meanwhile, recent proposals to transform both the Davidson and Warrior buildings into a combination of an upscale hotel, office, retail and apartments may soon bear fruit, expedited through a state-sanctioned reinvestment district. However, I can only imagine the local buzz surrounding such a proposal is less than enthusiastic, especially since the Hilton’s closure remains fresh in people’s memories.

I wish Sioux City’s downtown revitalization boosters the best, and I sympathize with their persistent disappointments up to the present. Many similar efforts have borne fruit in other cities, so the lack of success has nothing to do with complacency. If anything, it appears that so many downtown revitalization attempts have depended upon new construction of big-ticket items, when the best that Sioux City has to offer may materialize through the patchy but generally well-maintained two- and three-story storefronts in areas like 4th Street or Pearl Street across from the MidAmerican Energy building. In short, incremental improvement of low-intensity existing buildings may trump any of the proposals intended to evoke a wow factor. As I type this blog article, I sit in a coffee shop in downtown Asbury Park, New Jersey—a small city whose downtown is flourishing, after decades of suffering the reputation of not just dead but dangerous. No convention centers, no fancy hotels, no stadia, and the closest to a performing arts venue is The Stone Pony—an icon but hardly a leviathan. The metropolitan forces at work in Asbury Park are radically different from Sioux City, but the metamorphosis offers a shred of hope that any city—no matter how big or small, coastal or inland—can emerge from the brink, when the ducks are all in a row…or even just the ducklings.

18 thoughts on “Downtown revitalization: when every silver bullet proves nothing more than a blank.”