Has urban America learned its last lesson on downtown parking? After forty years of declining fortunes, have we deduced that giving people cheap, abundant, convenient places to park their cars failed to save our city centers? Have we finally realized that demolishing 100-year-old buildings to form new garages and lots did not stem the vacancy rates? Did we eventually wake up and realize that all those ugly garages and boring lots only made our downtowns worse?

One can hope we’re finally catching on. Perhaps the best evidence is that an increasing number of cities have eliminated the zoning and land development provisions that have long mandated a certain minimum number of parking spaces for new development. Historically (or at least the for the last fifty years) most zoning or land development ordinances would require an apartment building to include at least X number of spaces per proposed dwelling unit, or X spaces per 1,000 square feet in an office/commercial building. In most cases, the required spaces proved far greater than actually necessary, pushing up the costs for the developer and wasting tremendous amounts of space when escalating real estate encouraged efficiency and economy of design. By eliminating these mandated minima, city leaders have recognized that developers are the best arbiter of the market demand for parking, because they have far more to lose if they fall significantly short or in excess of the reality. Thus, the developers have far more incentive than planning commissions to provide the optimal amount of parking. And, in some cities not historically famed for their great mass transit or large downtown residential populations, old parking garages have fallen into such neglect that the city itself has bankrolled their demolition. Better to put something on that pricey downtown parcel with greater economic potential. All that parking was overkill.

But from the late 1950s to the first part of the 21st century, we sure built a lot of parking garages downtown. So a demolition here and there is a drop in the bucket, especially since, with each new mega-development, public paranoia over parking rears its ugly head. Thus, the aftermath of our obsession with accommodating the car lingers, manifested through some often ugly and underutilized mammoths. Take this one in Bridgeport: 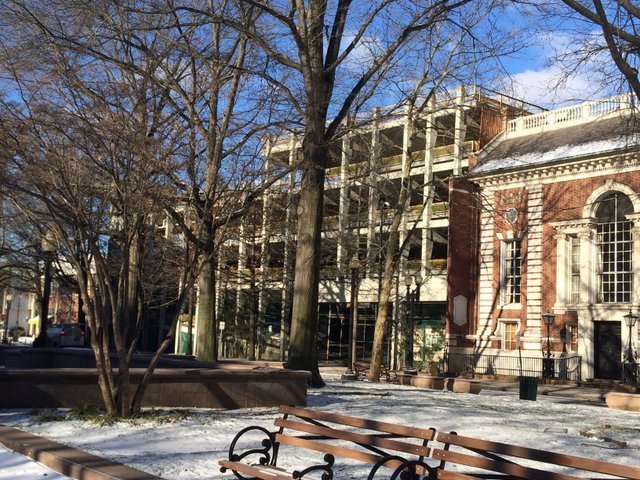 It doesn’t even take a zoom-in to conclude that the structure isn’t exactly aging gracefully. But did it ever look good? I know that aesthetics are subjective, and prevailing tastes often shift with the times. But seriously: how is anyone going to make a compelling argument for this garage in Bridgeport, especially when judged in the context of its immediate surroundings? 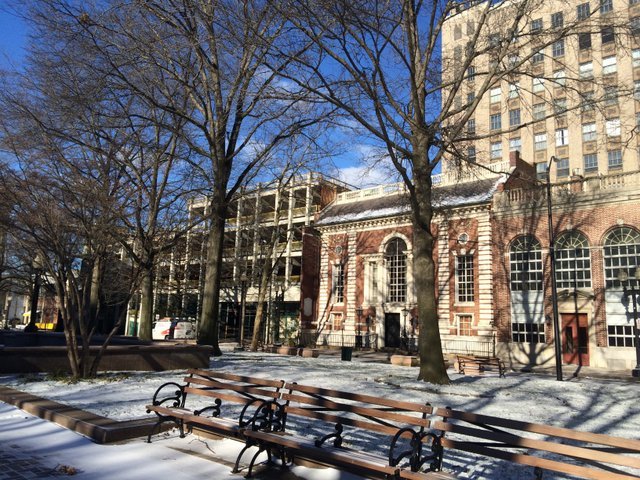 One could cavil about how the ugly garage abuts buildings with legitimate architectural interest, or how it lacks any retail or offices on at the street level that would help offer pedestrian interest. It’s also easy to fault its prime location within Bridgeport’s historic center, since it fronts McLevy Green, the city’s oldest public park. 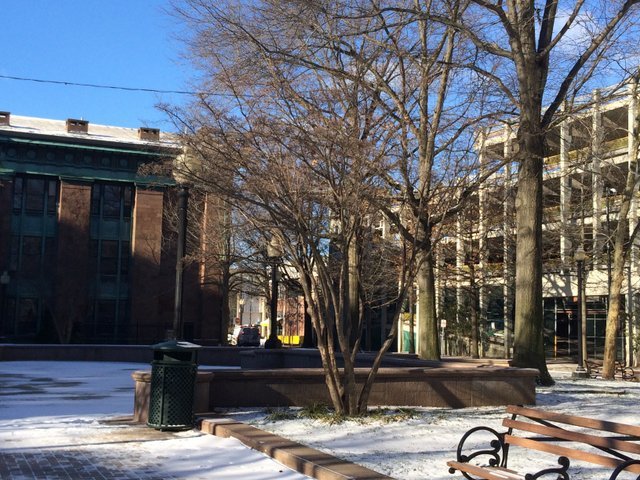 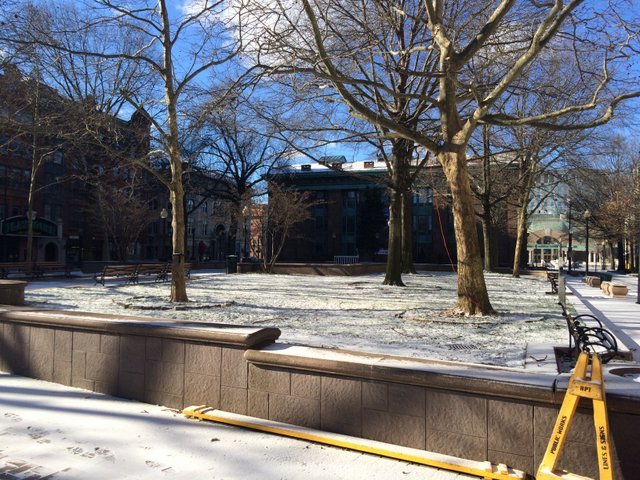 But the biggest shortcoming to this garage is that it shows no evidence that its developer instilled any design into the product. It consists of concrete floors, support columns, and ramps, with chain-link fencing on each floor to serve as rudimentary guardrails. Everything is exposed to the elements, and the rust on the chain-link fences suggests it’s both old and minimally maintained. And it should come as no surprise that the backside isn’t any better. 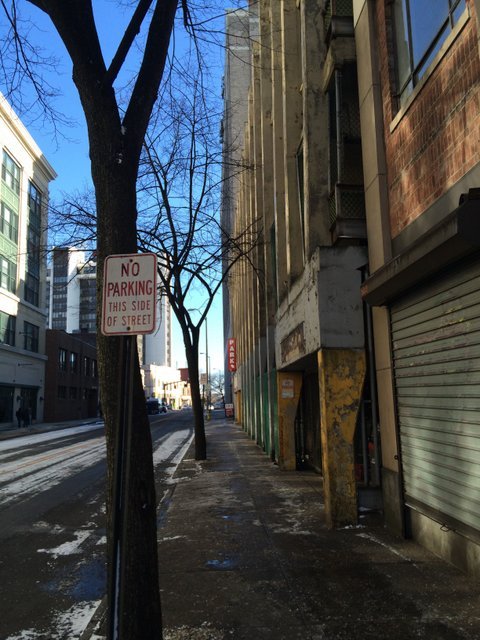 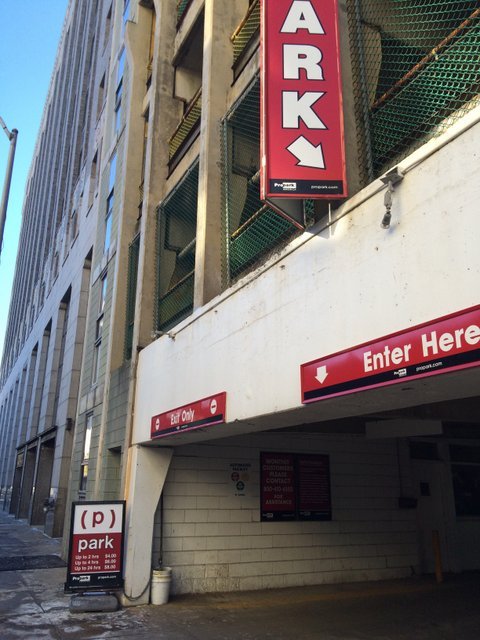 It’s a parking deck and nothing more. It’s all engineering.

Now take a closer look at that sign. The hourly rates are meager: 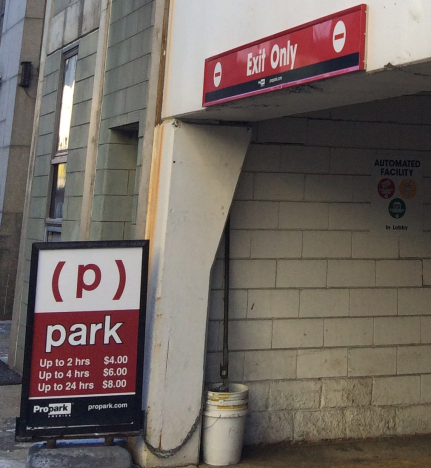 I’m gonna go out on a limb here, but I don’t think this garage would appraise all that well. To be fair, its value—or lack thereof—may have less to do with its appearance or even its condition than the fact that Bridgeport’s downtown still appears seriously distressed. Though at this point it’s the largest city in Connecticut by population, it sits equidistant between two similarly-sized cities—Stamford and New Haven—both of which enjoy considerably greater economic fortunes, less than 25 miles to the west and east. Meanwhile, nearly all the communities around and between these three cities offer an expansive, mature suburban environment along New York City’s Metro North Line—commuter rail linkages to some of the most affluent communities in the country. At this point, there may simply be too much urbanization—too many cites–nearby for Bridgeport effectively to compete. Thus, it offers what it can, which, as far as the downtown is concerned, is relatively little. With virtually no evidence of downtown revitalization taking place, a garage as nasty as this one not only survives, it offers pricing at about the only level visitors to Bridgeport would be willing to pay, most likely eking out a profit margin that confers no budget for upgrades or even real maintenance. Perhaps the garage is structurally sound, but even if it isn’t, the prevailing market forces and political energy will hardly spur the hiring of any structural engineer any time soon. Or an architect, for that matter. This garage is only going to get worse before it gets better.

Fortunately, the growing realization that parking garages aren’t the sine qua non that they once were has effectively demoted their prominence in the urban streetscape. I’d be hard-pressed to think of an example of a garage constructed in the last twenty years that’s as unsightly as this one in Bridgeport.   Though I suppose there is this one on Marconi Boulevard in Columbus, Ohio… 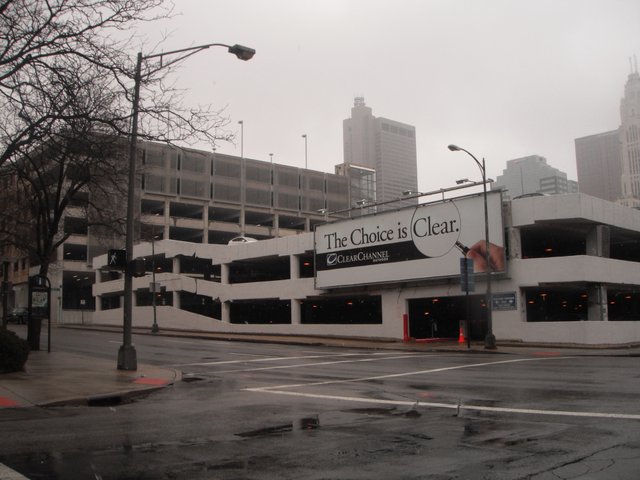 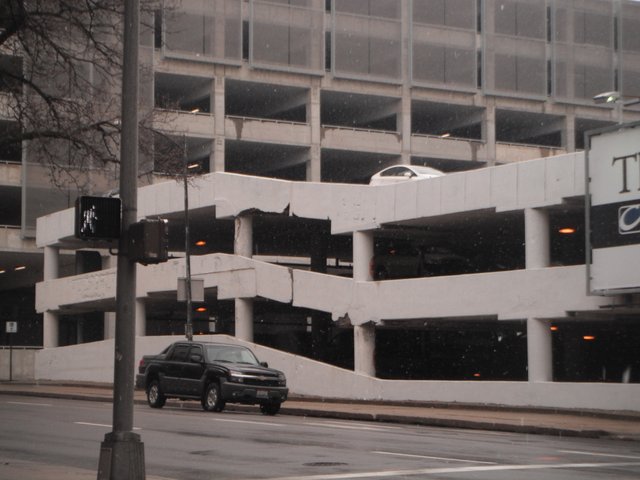 Pretty horrendous, and perhaps even worse, since it is flush with a downtown street corner, and, unlike the Bridgeport example, it doesn’t even go up that high: a deck of only three floors. But it probably dates from a time when downtown Columbus was struggling, which is hardly the case now, particularly when juxtaposed with Bridgeport, which remains an economic laggard to this day, in most respects. (At the very least, I recently learned that this Columbus ugly garage, taken from a 2013 photo, is no longer operative. Barricaded and sealed off, the Marconi Garage most likely awaits demolition. The Bridgeport ugly garage still stands and remains open for commuters.)

As downtowns have improved incrementally, the centrality of parking garages has ebbed. More often than not, developers today recognize that garages don’t need to be visually prominent to succeed. Far more effective is an edifice where the parking is unobtrusive: completely underground, tucked along a back alley, or ramped up to a second/third floor so those lower levels can go to better uses, like pedestrian-scaled retail. In those rare occasions when a garage rises on a downtown street as its own entity, the architect has typically cladded those thick, relentlessly horizontal concrete decks with embellishments to mute the relentless horizontality—its excessive garageiness. Most recent garage constructions look pretty slick; in some cases they’re barely recognizable as garages. Obviously some are better than others: my home city of Indianapolis recently improved (and partially bankrolled) a controversial garage along a prominent downtown street, which exists solely to serve a nearby office building that sold off some of its surface parking to an apartment developer.  It’s a colossal waste of prime streetscape in the city that remains a sore point for anyone who cares about urbanism in the Indy area. But now, another distant city may completely outdo it by helping to finance a garage that supplements a developer’s modest mid-range, mixed-use project. This second project (that will remain nameless) not only requires the demolition of close to a dozen century-old buildings, some of which were in perfectly good shape, but it offers no ground-floor retail and includes a multi-level skyway, which will span across…get this…a pedestrian greenway.

Time will only tell if either of these short-sighted developments become the albatrosses that Bridgeport and Columbus no doubt see their undervalued, ugly garages. At least, in time, we can predict that this albatross may eventually become an endangered species. We should be so lucky.

PrevCommunion for Camrys.
Taking luggage to a whole new level.Next

9 thoughts on “The ugly, underutilized garage: soon a mere memory?”