Driving southward on Pennsylvania State Route 134, one encounters a run-of-the-mill rural intersection, indicated by the streetlight in the distance of the photo below. 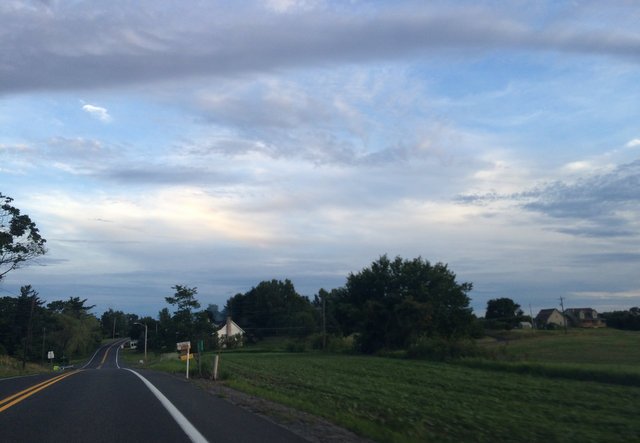 Doesn’t look like much, does it? If you get a little closer, it turns out it’s one of the most candid indicators of what may be the country’s most culturally significant interior boundary. 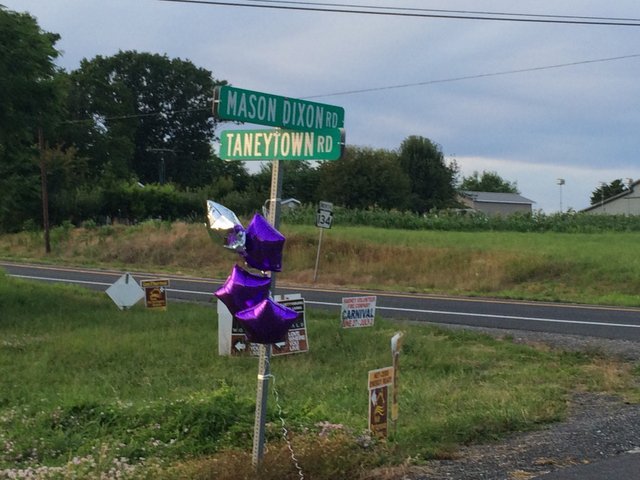 Truth be told, neither Charles Mason nor Jeremiah Dixon were American by birth or by assumed citizenship, though the former died in the US. And the Mason-Dixon Line that preserves their names served not just to demarcate the Commonwealth of Pennsylvania from the State of Maryland for which it is best known; it also settled a dispute between Maryland and Delaware (originally “the Three Lower Counties” of Pennsylvania), at Maryland’s eastern edge, meaning the Line veers sharply southward, almost to a right angle, at the point where Pennsylvania, Maryland and Delaware meet. Furthermore, it continues westward and delineates southwestern Pennsylvania from West Virginia (formerly part of the Commonwealth of Virginia, until the Civil War). The Mason-Dixon Line looked more or less like this at its formation, just as it does to this day.

In all fairness, this Mason Dixon Road fails to synchronize exactly with the Pennsylvania Maryland border: this terminus point sits about 500 feet north of the line, squarely within Pennsylvania. But it’s the southernmost public road before S.R. 134 crosses into the Old Line State (Maryland’s most common nickname, though it has nothing to do with Mason-Dixon). Aside from some Mylar balloons tied to the post, nothing’s too visually remarkable about the sign, yet it conveys the most powerful distinction between the Old South (slaveholding states) and North (free states). To this day, we’ve all heard references to some cultural artifact for which the justification tends to be “well, it is [south/north] of the Mason-Dixon Line.” We can particularly expect to hear such a phrase in the states immediately to the west: West Virginia, Ohio, Indiana, Illinois, through which the Mason-Dixon Line would have continued and bisected if the surveyors had responded to further territorial disputes. In those states, the South really does collide with the North…but without any official boundary.

In actuality, the Mason-Dixon Line had far less influence on slaveholding policy than parallel 36°30′ north, which formed the basis for the Missouri Compromise, leaving Missouri the only slave state west of the Mississippi and north of this parallel. It also serves as the primary boundary between Tennessee and Kentucky, then Virginia and North Carolina up to the eastern coast. But nobody refers to 36°30′ for anything; Mason and Dixon receive the overwhelming cultural honor.

Why did Mason-Dixon earn all the coverage? It may have something to do with the Line’s historical proximity to a disproportionate number of Civil War Battles. Just a few miles to the north of this site is the Gettysburg Memorial Battlefield, one of the most visited war memorials in the country. Antietam is not too far away, near the Potomac on the Maryland side. And the numerous battles in northern Virginia may not seem to evoke Mason and Dixon, but they remain far closer to that line than to the line of Missouri Compromise.

So this road may seem like a humble indicator of a boundary that still carries baggage to this day. And it’s not even that accurately placed. But, bearing in mind the thousands of lives lost in Gettysburg just down the road, this serves to reinforce the brand for heritage tourism in the area. I’m not sure this rural collector has much of a greater function, since it mostly provides access to The Links at Gettysburg, a golf course resort and community nearby. And at least Mason-Dixon serves as better name than the other prominent geographic in the immediate area: a creek named Lousy Run.