Amidst the prosperous expanses of suburban Philadelphia, we encounter a mall. 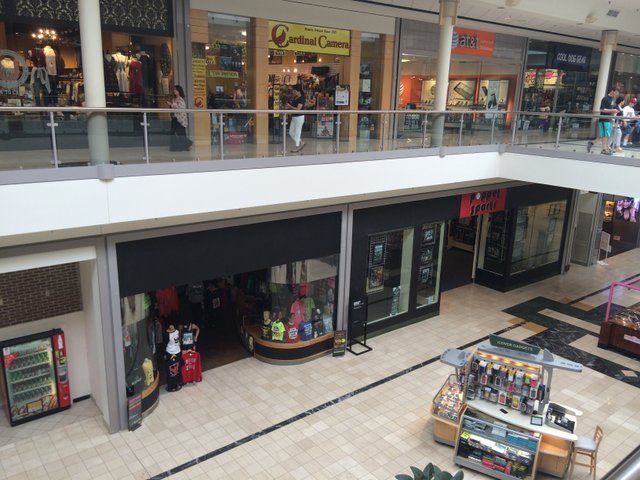 Let’s get real here. This the eighth largest metro area in the country. Of course there’s a mall—quite a few, actually, and this blog has covered more than its fair share.

This one, heretofore unexplored and located within Montgomery Township, Montgomery County, Pennsylvania, is appropriately called the Montgomery Mall. While my penchant is for malls that are struggling, either due to the economics of the area or the closure of an anchor tenant (or probably both), neither really characterizes this mall. Median household incomes in the surrounding area approach the six figures. This township has doubled in population since 1990. Many of the nearby shopping centers appear less than twenty years old, and they feature a mix of big-box retail, national chains, ethnic restaurants and mini-marts, as well as some fashionable-looking entrepreneurial ventures, no doubt intended to satiate the suburban appetite for brewpubs, Vietnamese street food, and boutique chocolatiers.

Despite the obvious affluence of the area, Montgomery Mall is, like so many others, simply treading water. It’s the same condition that afflicts many, many other malls in Metro Philadelphia, including the Oxford Valley Mall to the east, the Neshaminy Mall to the southeast, and the Plymouth Meeting mall to the southwest.  In most respects, this mall near the border with Bucks County is in better shape than the others: it has five anchor tenants (all occupied), it hosts virtually no non-profit services in the interior (never something you expect to see from a flourishing mall), and it offers more than a few coveted upper-middle clothiers: Ann Taylor, Banana Republic, Francesca’s, and White House Black Market, as well as the emerging fast-fashion Japanese chain Uniqlo. Lastly, Simon Property Group owns 60% of the mall; as the world’s largest mall owner and operator, it owes much of its success to its nimbleness and ability to anticipate some of the subtlest shifts in consumer tastes for retail.

But the Montgomery Mall is still soft. Look at that photo again. Aside from dedicated space for a vending machine in the lower left corner, the tenants include a mom-and-pop sports collectibles purveyor, an unidentified t-shirt store (probably seasonal), a local dog supply store, and—part of a dying breed—a camera shop. These are not the national brands a big mall in a wealthy area would generally chase down. Elsewhere, the vacancies are obvious: 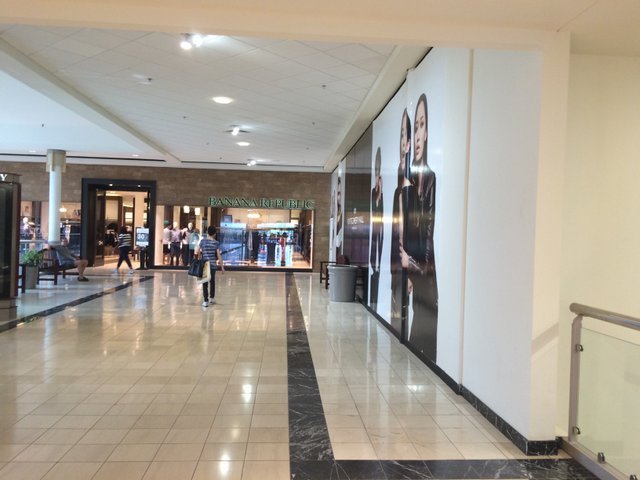 One of the largest vacancies announces that a newly renovated Victoria’s Secret is arriving soon. That’s fine and good: most evidence suggests that Victoria’s Secret has weathered the economic turmoil of the last decade quite effectively. But, in this case, it’s hardly a new or auspicious arrival. 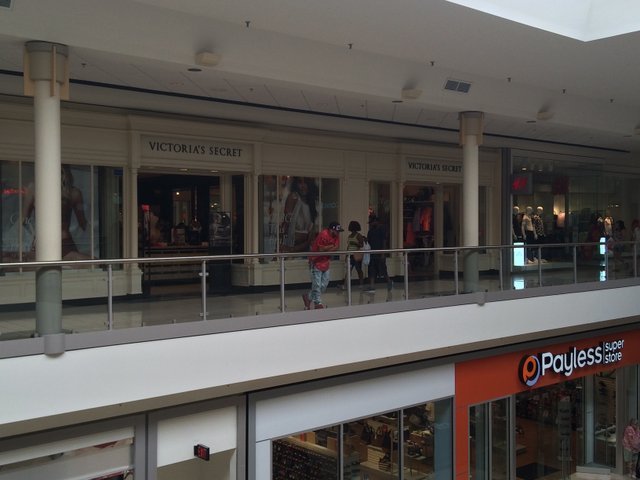 Montgomery Mall already has a Victoria’s Secret several hundred feet away, meaning that the opening of a new one will shift the tenancy from one side of the mall to the other. It’ll have no impact on the vacancy rate, which I estimate is pushing 15%. This is hardly cause for alarm in 2016, but in 1985, a mall with over 10% vacancy was seriously threatened.

Fortunately for the mallrats of Montgomery Township, Montgomery County, the Montgomery Mall has found an effective salve for the retail retreat. 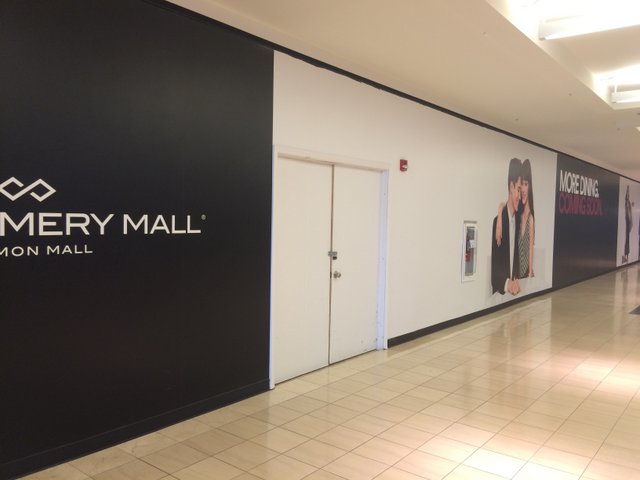 Notice the far-right edge of this panel: “More dining coming soon.” Not really a surprise, since (with a few exceptions) restaurants have generally proven a resilient counterpart to the perpetually confused state of American retail, apparently under permanent threat from online shopping. I blogged about Jersey City’s Newport Centre Mall (another Simon property), which converted a former discount clothing store into a Cheesecake Factory. Simon has been morphing former retail spots into restaurants at both conventionally suburban as well as some of the few surviving downtown malls (like Circle Centre Mall in Indianapolis). It makes sense for Newport Centre, which is essentially an auto-oriented mall, in a densely populated city that just happens to have mass transit access. The site for the Cheesecake Factory is at the mall’s perimeter, so it remains visible to the outside world, whether the world arrives by car, foot, bus, train, or subway.

But this “dining coming soon” space at the Montgomery Mall is landlocked, if you will. It rests on a corridor near the mall’s edge, but it has no clear direct contact to the outside. Here’s the adjacent parcel, with both interior and exterior access: 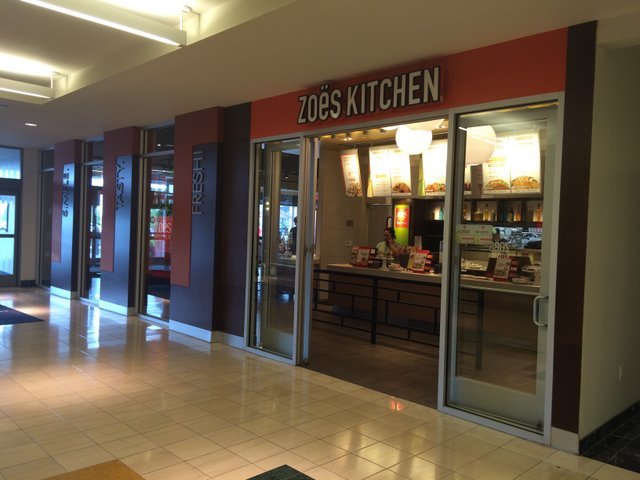 And here’s the tenant immediately across the corridor, with exclusively exterior access: 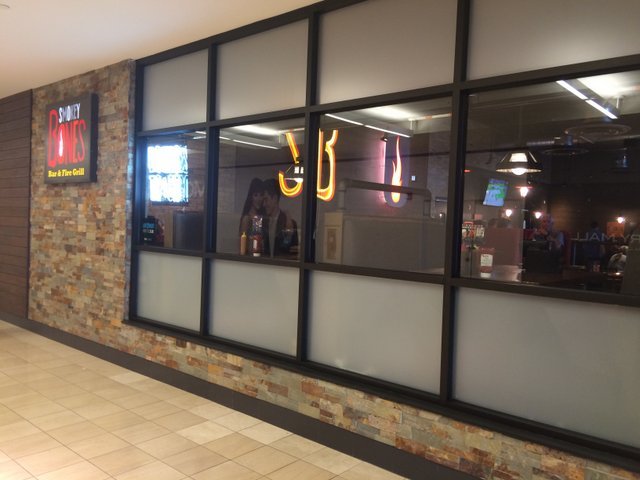 More restaurants. In fact, this entrance to the mall offers a sort of restaurant panoply. 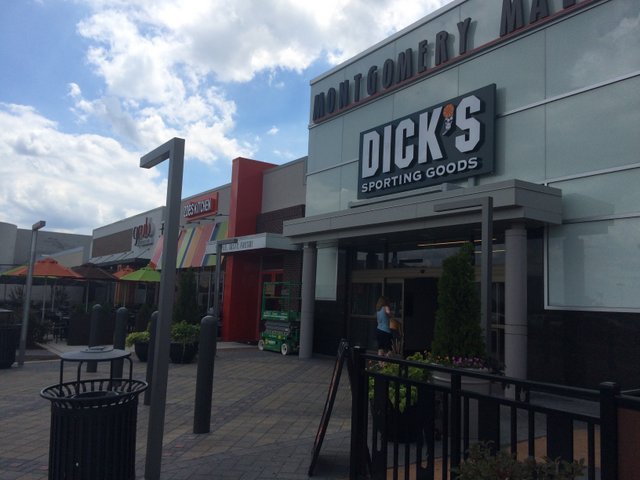 And, if we pivot to the right from this view, we see the Montgomery Mall’s most recent new anchor tenant: 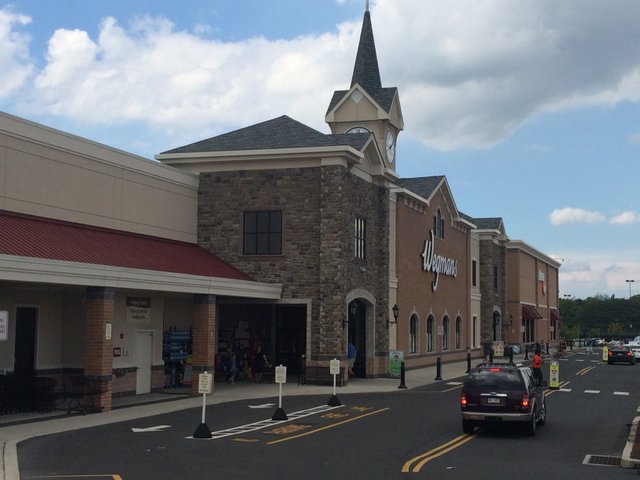 The upscale grocery chain Wegmans, which, in combination with Dick’s Sporting Goods, took the site of a former Boscov’s after it closed during its 2008 bankruptcy restructuring. As much as Americans have embraced online shopping, they’re unlikely to go to Amazon to find a great tomato. Food and food-service establishments have weathered the retail evolution much more than clothes, or tools, or electronics. Incidentally, while physically connected to the rest of the mall, the Wegmans offers no internal access to the rest of the facility.  The mall needs the Wegmans far more than the Wegmans needs the mall.

What is the new restaurant we can expect? I’m not sure they’ve found one. It may be a tough sell. The presence of a new restaurant in the mall’s interior may not seem like a big deal. After all, most malls have food courts that lack direct doorways to the exterior. But food courts were generally a part of the mall’s original conception—the developer designed them to operate the way they do. And they benefit by clustering, coupled with people’s expectation that a certain wing of the mall will offer both food and seating, calibrated to the mall’s general operating hours. Chances are good that this proposed new restaurant at the Montgomery Mall will be something other than fast food (the space is too big) and the future tenant will probably desire to remain open later than 9pm (or 6pm on Sundays). Attracting a restaurant to this space could require a rethinking of mall security: lighting, gates, locks, personnel. Patrons to this restaurant must walk enter the mall first—a characteristic that puts this location at a distinct disadvantage to Smokey Bones or Zoë’s Kitchen. But it’s all part of the managerial maneuvering necessary to keep a fundamental retail typology afloat during these turbulent times. Coming soon to a mall near you: a giant climbing wall? We’ve already got ‘em.

4 thoughts on “For moribund malls, there’s redemption in restaurants.”