Where the sidewalk (investment) ends.

As remarkable as it is to witness the revitalization of historic downtowns in cities of varying sizes throughout the country, it’s hard not to remain cynical when looking at how these transformations fit within the life cycle of American cities in general. Sure, many of our city centers command more interest and generate greater economic activity than they have since the 1950s, when car ownership became a virtual necessity and the suburban shopping mall emerged as a direct—and ultimately successful—competitor to main street shopping. But this urban renaissance, however mainstream by now, has not yet stood the test of time. How do we know the hip and lively downtown isn’t just a passing fad?

Prevailing tastes tend to shift routinely and sometimes quite rapidly. Among the best examples is Cleveland’s off-again/on-again entertainment district The Flats, which was at its latest peak in the late 1990s (long before downtown Cleveland enjoyed any sort of revival), when the formerly gritty industrial area offered an abundance of bars, nightclubs, and live music venues. But it eventually lost its edge, as national chains like Hooters and Dick’s Last Resort took advantage of escalating rents, which in turn pushed away many of the more homegrown establishments…as well as their loyal patrons.  Replaced by nascent entertainment districts like Ohio City by the early 2000s, The Flats declined and fell into complete neglect. It was no longer the new kid on the block.

Another threat to these revitalized downtown districts is the diminishing diversity of the tenants that fill these formerly underused (or even completely vacant) buildings. As recently as 2010, a surefire indicator of a resurgent urban center was the emergence of good retail—the shops one might have previously found in suburban malls, or (ideally) their locally owned counterparts. But bricks-and-mortar shops have receded, as the more successful vendors are generating higher profit margins through online sales—a transaction method that consumers increasingly prefer. In fact, malls are feeling the pinch as well, as they represent a stale, outmoded typology to tech-savvy consumers who can find what they need through point-and-click, rather than driving and browsing the aisles.  In the last decade, we have witnessed more and more downtown buildings filling their first floor space with restaurants, music venues, or specialty bars (microbreweries, distilleries, meaderies, cideries). These venues offer a product fused with a service, optimally housed in a fashionably accoutered and welcoming environment. One might even argue that it has become part of an ambitious chef’s brand to choose a repurposed old building in an urban setting, not only because the high income density within revitalized districts but because an innovative meal in a restored structure dripping with character and fronting a pedestrian-scaled, vibrant city street is the gestalt for contemporary entrepreneurship.

But, again, the recovery is not without its red flags. While municipalities in every region and a variety of sizes have reaped the bounty of this renewed urban curiosity, a significant number—perhaps still a majority—are just treading water. For every rowdy Raleigh, a dormant Durham nearby serves as the yang to its ying. And I’ve blogged about the picture-perfect Clinton, New Jersey, but, just ten miles to the north, the larger borough of Washington, NJ cannot seem to replicate Clinton’s success. And in Vermont, the two southernmost municipalities offer entirely different vistas: Brattleboro’s thriving downtown is popular both with locals and visiting tourists from metro New York; conversely, Bennington’s downtown struggles to retain even a single nice restaurant. (One could of course argue that the two successful communities, Clinton and Brattleboro, both boast immediate adjacency to a major interstate. But haven’t we also heard the argument that interstate highways helped to kill downtowns?)

Another example of a reasonably large city in an entirely different part of the country that has shown virtually no evidence of a downtown comeback is Kansas City, Kansas. 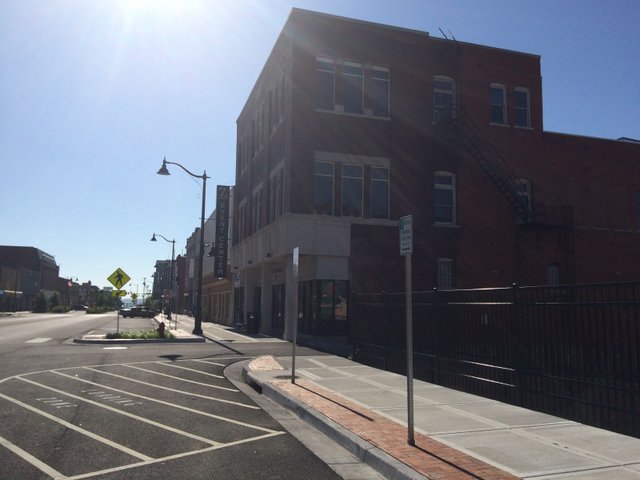 Long a quieter, less prosperous cousin to its significantly larger counterpart just a few miles away in Missouri, Kansas City Kansas (commonly—and, I suspect, somewhat dismissively—referred to as “KCK”) claims an unusual socioeconomic position within the larger Kansas City metro. The Missouri city and metro hub has long endured profound geographic divisions: the majority of its population growth stretched to the south of downtown, but Troost Avenue, running north-south, served for decades as the de jure segregation line, with the less prosperous black communities expanding to the southeast, into Missouri, while the often very affluent white communities stretched to the southwest…into Kansas. Yet KCK, just to the west of KCMO’s downtown, remains overwhelmingly working class, even as the majority of the adjacent communities to its south (Lenexa, Overland Park, Olathe), largely clustered in Johnson County, have made “JoCo” the wealthiest county in Kansas and among the richest in the country. Kansas City, Kansas covers much of the comparably tiny Wyandotte County, which altogether has enjoyed little of Johnson County’s considerable prosperity. All in all, though, KCK is an exception to the principle that the Kansas side is the wealthy side.

Not all of KCK is blighted by any stretch of the word, but the downtown hardly offers a promising gateway to the rest of the city that continues westward. 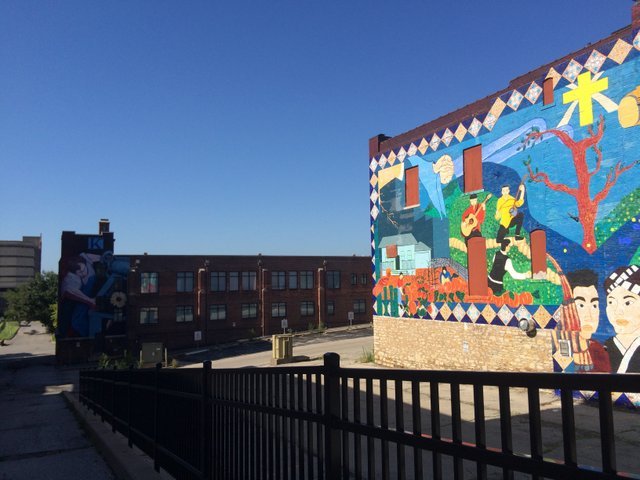 I took these photos just a few weeks ago, at about 8:30a on a Saturday. While not typically a time of great commercial activity, even in the best of downtowns, the clear indicator that downtown Kansas City is struggling is the occupancy rate of the storefronts, which is bleak. 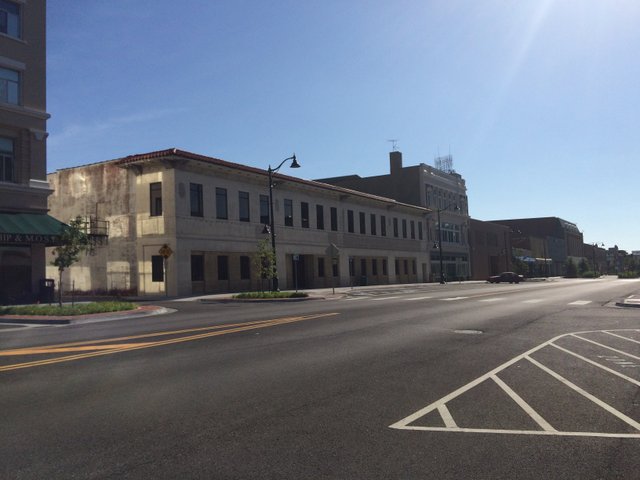 But not everything about this vista is forlorn. The sidewalks sure look spiffed up. 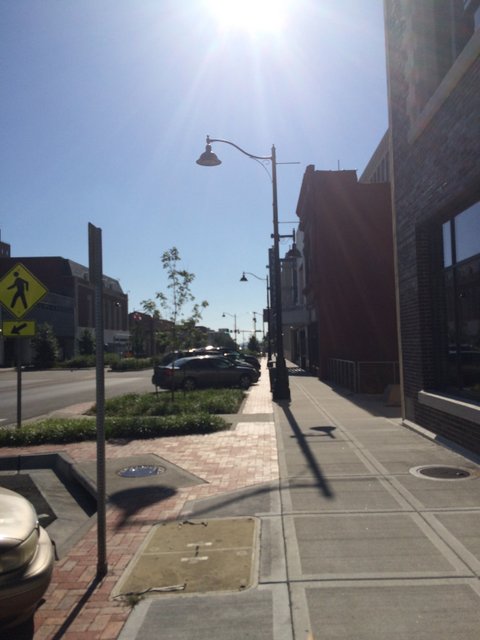 I’m normally not a big fan of brick sidewalks, and I have impugned their viability as a paving tool in the past, mostly due to their tendency to deteriorate quickly and serve as a tripping hazard, suggesting that the improvement emphasizes aesthetics over safety. But the Kansas City treatment here is pretty solid, since it doesn’t rely exclusively on bricks but instead uses them as “accents” at the sidewalk’s edge, creating an upscale embellishment while depending on the safer concrete to serve as the primary finish.

The landscaping in the median appears fresh and newly planted as well. 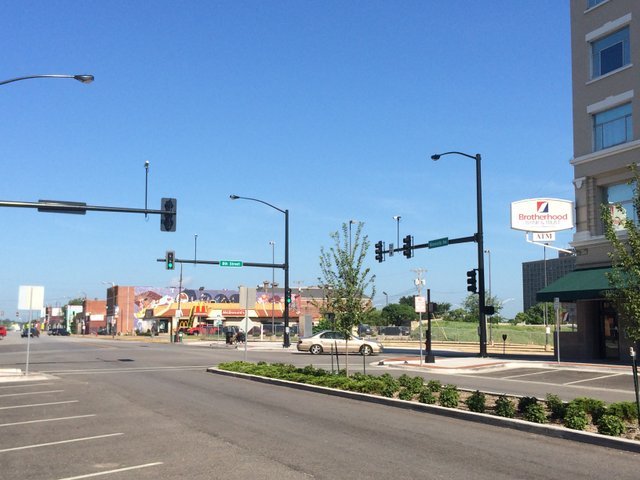 As an added benefit, the new installations offer widely visible pedestrian crossings, with the popular “bulb-out” that extends the curb into the street at certain chokepoints, conferring to the pedestrian a narrower (and thus safer) road to cross. 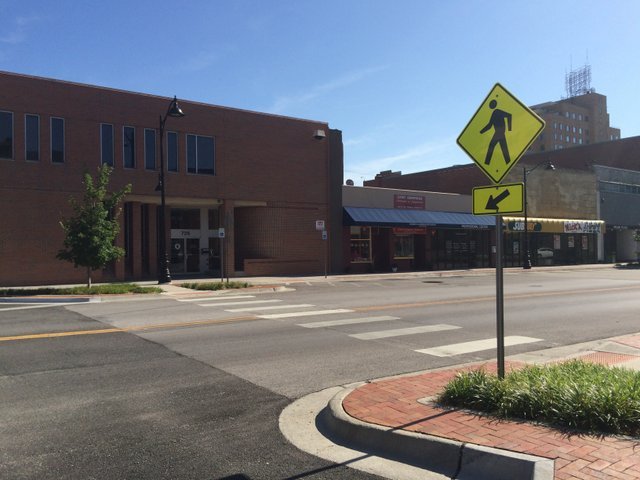 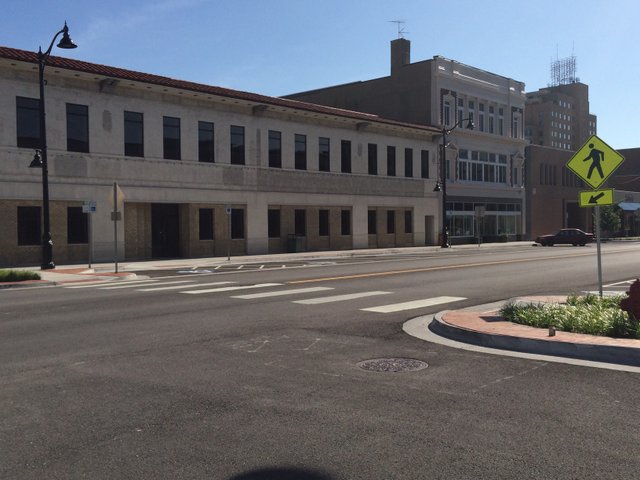 Lastly, the dense grasses at these carefully bricked bulb-outs appear to serve as rain gardens, endowing the intersection with greener stormwater management than the conventional sewer. 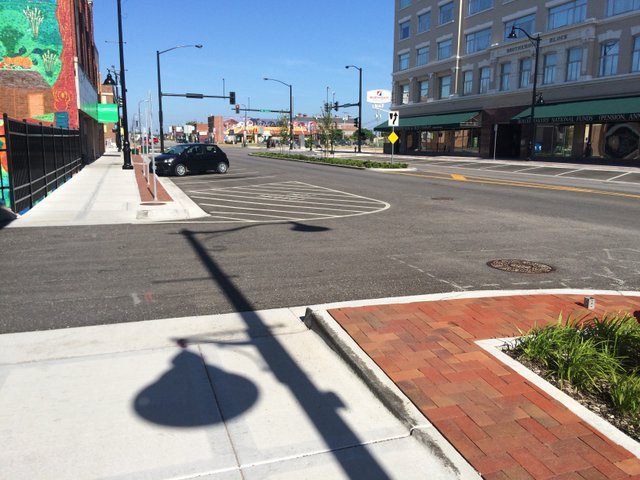 Judging from the age of the nearby trees, as well as the lightness of the concrete, all of this is fairly new.

In this day and age, what KCK offers is nothing less—or nothing more—than the latest in popular streetscape improvements. I blogged about it at a much smaller scale several years ago in the town of Edinburgh, Indiana, and I suspect the prevailing rationale between these two municipalities is widely the same: both demonstrate an attempt to attract pedestrian activity to the area, with the hopes of lowering the vacancy rates in these older buildings. In many regards, they are the 2010s equivalent of the 1980s pedestrian mall, an initiative that many downtowns explored for their main streets to compete with suburban shopping, nearly all of which flopped. It’s hard to tell whether these more contemporary pedestrian amenities will have much better luck, because, these days, struggling downtowns aren’t competing as much with malls as they are with other, non-struggling downtowns. In the case of KCK, the counterpart may be the slightly more successful downtown of KCMO, or—better yet—the thriving Country Club Plaza and Westport neighborhoods just to the south of KCMO’s downtown. Incidentally, the hip Westport district is only a neighborhood in theory: it originally functioned an independent town, eventually engulfed and annexed as the larger Kansas City grew southward.

The downtown of Kansas City, Kansas shows little evidence of successfully competing with its counterparts on either side of the state line, but it’s not for lack of trying. Even if the streetscape improvements fail to bring distilleries or Cambodian street food or artisanal horseradish purveyors to Minnesota Avenue, the upgrades certainly do help to spruce up the image of this street. How can we tell? Well, just go a block further to the west: 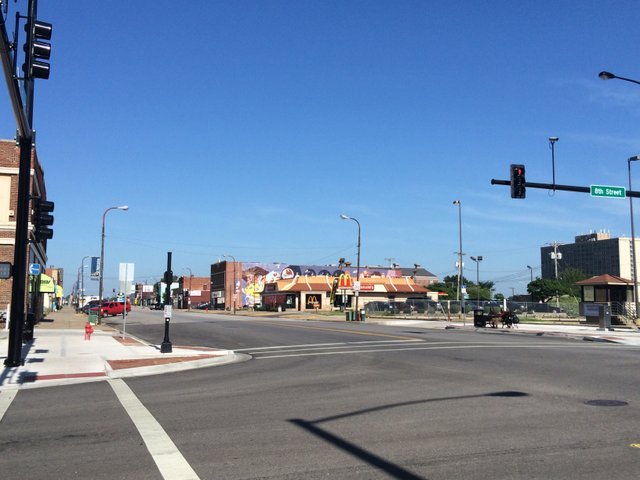 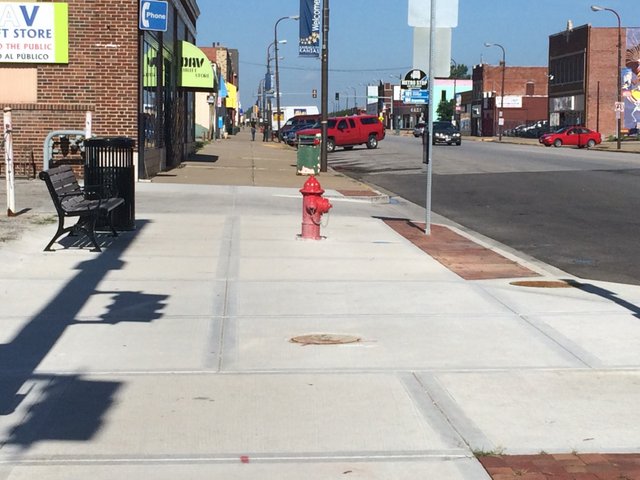 The change is dramatic, since the westerly view seems to offer even more tumbleweeds, even though the buildings are smaller-scaled and thus potentially more amenable to attracting the sort of capital-starved mom-and-pop tenants that often help spur revitalization. But the aesthetics are poor.

Incidentally, the change between the streetscape improvements and the unimproved almost creates a sort of seam between the old and new paving material. 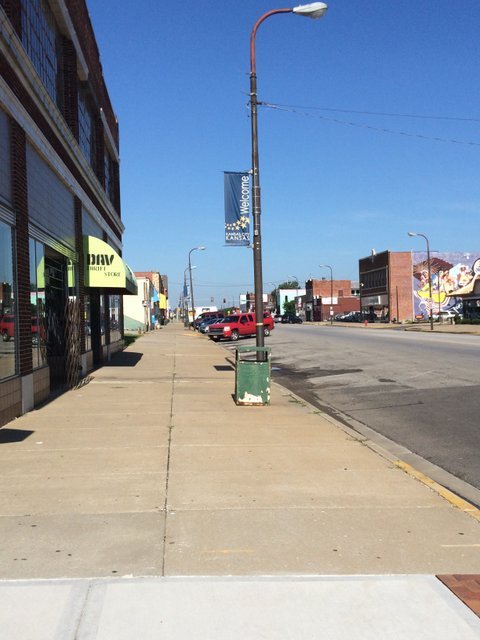 Maybe, a few years from now, the department of public works for KCK will push the upgrades further down the road. Maybe we’ll witness a genuine uptick in the occupancy rate for these buildings. Maybe both will take place. But it would be unfair to correlate the two. After all, downtowns have often revived along streetscapes that lack any real evidence of physical improvements. Sometimes they’re not even that great for pedestrians. Time may be the best means of healing Kansas City, Kansas’s fiscal wounds. But time is obviously what we need to confirm whether the revived main street is a flash in the pan, or it’s here to stay.

4 thoughts on “Where the sidewalk (investment) ends.”