An oasis and a bean-counter.

The climate of the American high plains may not be completely desert-like, but the similarities are uncanny: relatively little rain or moisture in the air, a temperature that plunges at night throughout the year, considerable variation between summer and winter, but fiercely hot in the former. Many of these characteristics incidentally bespeak high altitudes more than a desert: after all, anyone who’s visited the United Arab Emirates can easily recall the uncomfortable combination of a desert landscape with the climate (specifically the humidity) of the Brazilian rainforest. You’d be hard-pressed not to sweat through two or even three shirts over the course of a July day in Dubai.

A summer day in western South Dakota at Badlands National Park can easily top 35 degrees centigrade (95° F), but rarely would anyone call it unbearable: the humidity is generally low. Still, natural water sources are scarce, so the heat can still require one to hydrate strategically. Signage and the website warn visitors to this popular, mythologized natural setting that they should bring a liter of water for any hike over an hour in length. 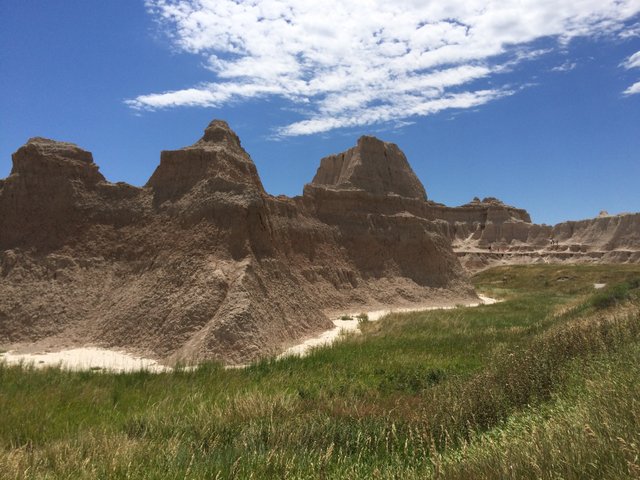 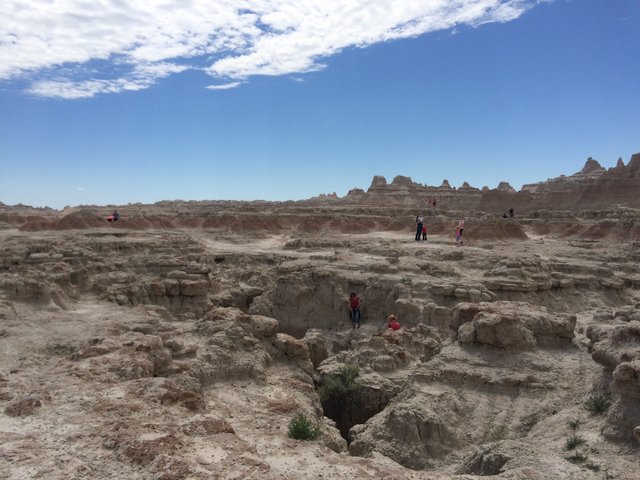 It certainly looks parched enough. But, unlike a desert, where the best way to seek relief from the heat is to take cover under shade, in the South Dakota Badlands it’s unlikely that high summer temperatures (the peak of the tourist season, since winters here are frigid) will faze much of anyone. The almost menacingly powerful prairie wind is just that strong. But comfort can lead to complacency. Reports of heat exhaustion at the Badlands aren’t common, but the relative isolation of the area means the results can be tragic.

Lest they forget to bring enough water, the Ben Reifel Visitors Center offers plenty, along with a variety of other amenities. 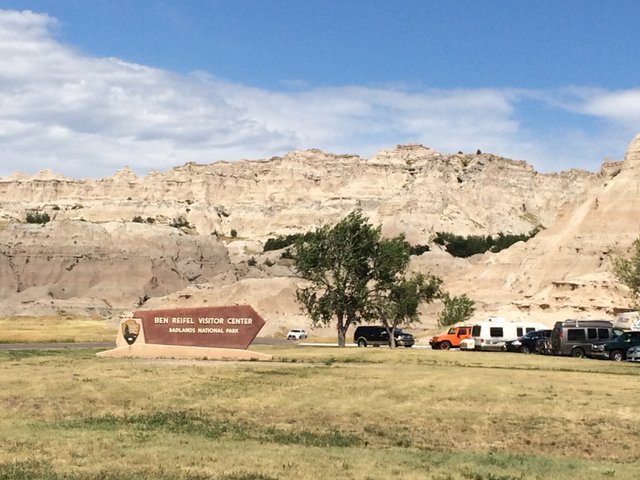 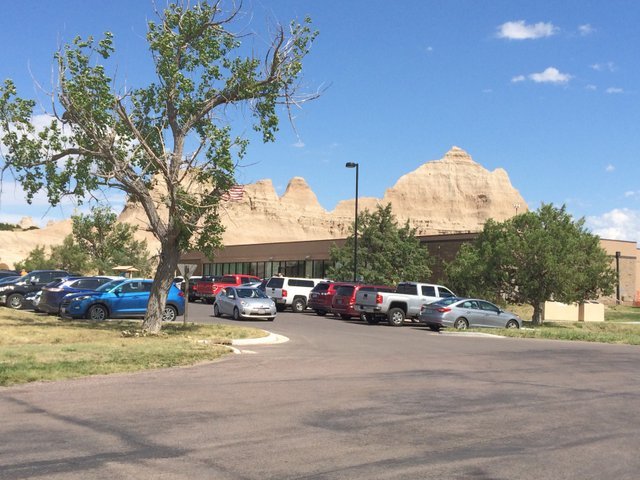 As is the case with most National Park Service facilities, the facilities are comfortable, well-supplied, commodified, and chock full of important geological (and often socio-cultural) narratives presented with the usual NPS good taste: scientifically accurate but probably a bit less precise, since the texts always aim for accessibility (understandable to an eight grader) without fully dumbing down the content.

And yes, the hydrating relief comes in the form of drinking fountains. 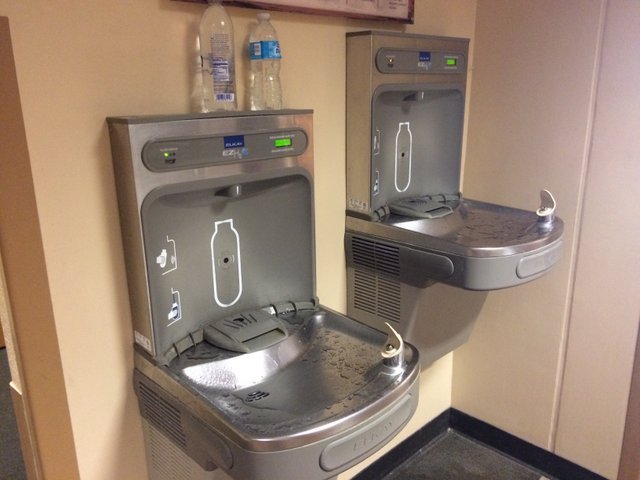 In this regard, I’m probably showing my comparative greenness to the NPS, since I haven’t visited nearly as many facilities as I’d like, and plenty of readers won’t marvel at what I’m describing. But the necessity of potable water raises the broader question of provision, conservation and sound park management in a large open natural setting that encourages visitors, many of whom don’t prepare as well as they should. Sure, they look like normal drinking fountains, with a distinct spigot designed for filling water bottles. 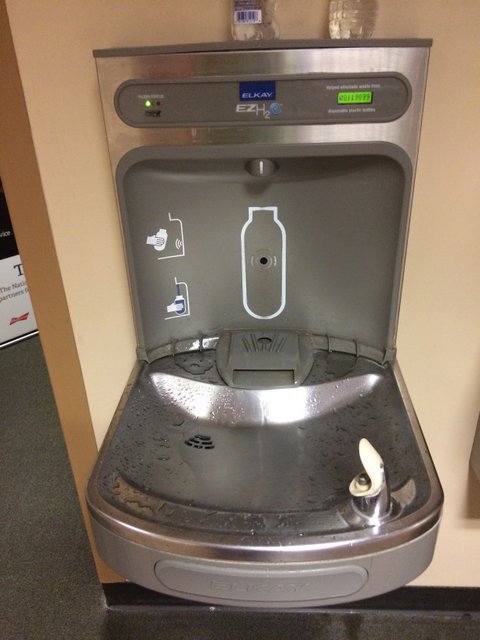 But they contain one other winsome feature: 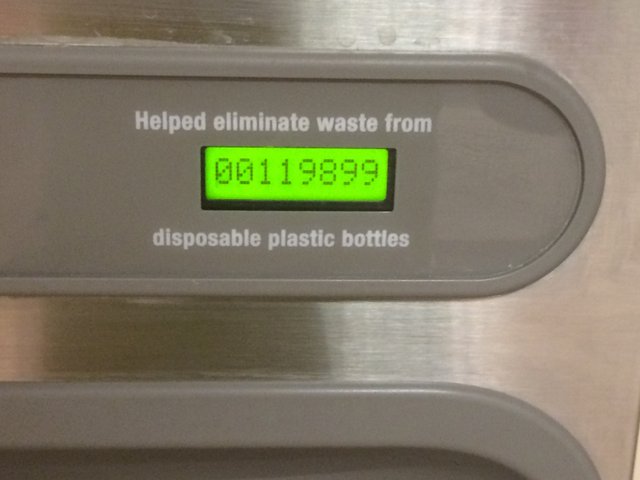 Yes, the fountain’s sensor counts the number of disposable plastic bottles saved through re-use, by refilling existing bottles instead of purchasing new ones. And, while visitor centers such as these, fully equipped with modern HVAC and plumbing, are rare, it appears that, at least in the Badlands, such drinking fountains are standard. Even the much smaller, remote White River Visitor Center, far to the southwest and managed by the Oglala Sioux Tribe at the Pine Ridge Reservation, endorses this approach to reduction of plastic bottles. 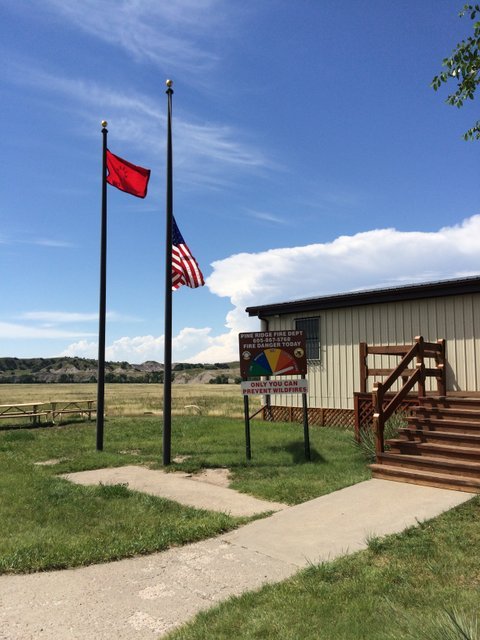 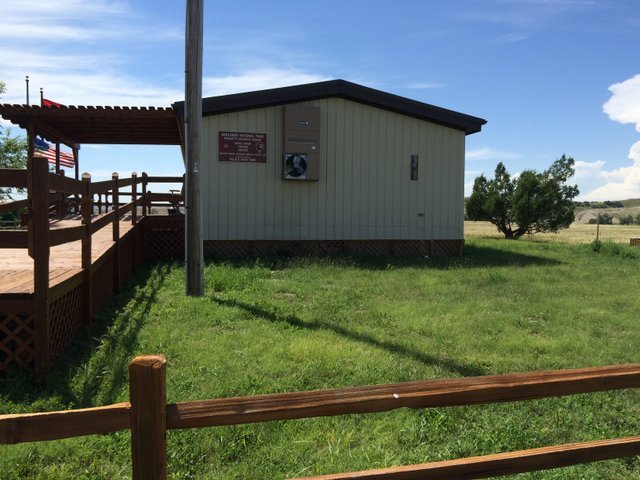 This small facility lacks a gift shop, but it still features an identical water fountain.

There you have it. I suspect that the NPS has incurred a small degree of liability in this decision: after all, the Reifel Visitor Center sits at the easternmost edge of the park, with no other options as one travels across the 22 miles of the Badlands Loop Road in the Park’s North Unit, which attracts the lion’s share of visitors. 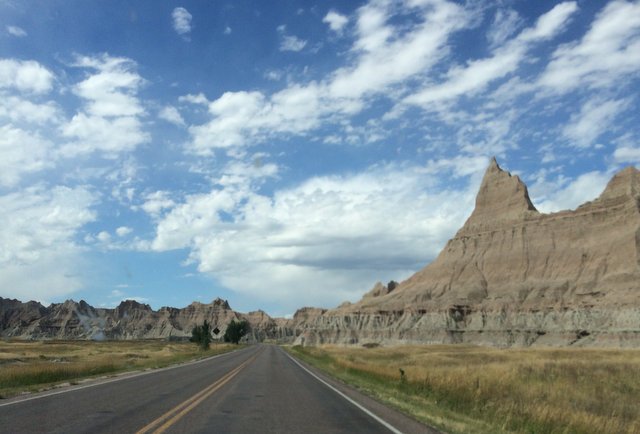 Beyond the White River Visitor Center, all other potable water sources require leaving the park grounds and purchasing it at a store. Fortunately, guests can re-enter an unlimited number of times within a week after paying the initial price. But the arrangement does not bode well for the unprepared (as is usually the case).

These water bottle monitoring stations may soon be the norm at NPS sites across the country, but apparently we aren’t there yet. Some friends of mine, who have far more experience visiting the nation’s national parks than I do, indicated that other visitor centers (often in less arid climates) still offer water bottles, often through private concessioners. From their experience, it is more of a commodity integrated with the gift shop, available in either refrigerators or vending machines. They believe (and I agree with them) that this could serve as a certain cushion from liability for the park, but, in a less parched park setting, it also undoubtedly offers a branding opportunity for the savvy vendor. Take this, for example: 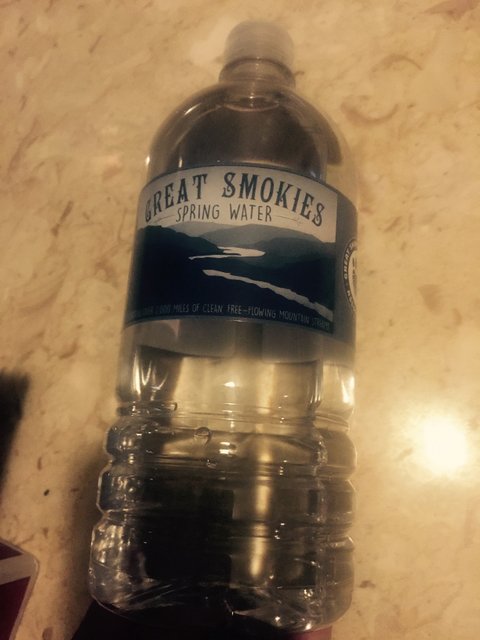 Meanwhile, what about all that water extracted from the buttes of South Dakota? It’s not such a great seller. Grasslands don’t exactly convey crystalline refreshment the way a mountain stream does. But it sure comes nicely out of those drinking fountains at the Badlands. Better bring your own bottle though.

4 thoughts on “An oasis and a bean-counter.”