Among those ritzy restaurants…a Reading Room.

In a nondescript nook within Summit, New Jersey’s generally thriving downtown, we encounter a main street standby from days past. 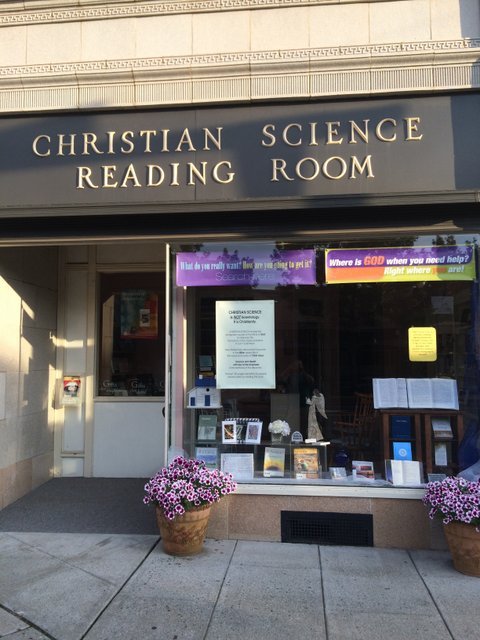 Yes, it’s a Christian Science Reading Room. I imagine most of us—most Americans, at least—have seen one at some point, even if quite a few probably don’t know exactly what they are. In the past, they were fundamental to an urban streetscape, appearing in the humble storefronts of both major metropolises and small towns.

But what exactly is a Reading Room? Exactly as the name implies: a quiet place for reading, which contrasts it sharply from a conventional bookstore. While they may sell books, these Reading Rooms do not intend to make money. Rather, they offer space for reflection and contemplation on their various tomes. And each Christian Science Reading Room sells, among many other things, the Bible (KJV) and Science and Health with Key to the Scriptures, the latter of which may leave many scratching their heads.

At its core, any Christian Science Reading Room is the most mundane portal to the teachings and beliefs of the Christian Science Church, founded by Mary Baker Eddy in the late 19th century, with Eddy’s Science and Health embodying the denomination’s principles. The best-known tenet of her book is that sickness is a flaw in a person’s psyche as it pertains to his or her relationship with god, best treated by a sort of healing prayer that reconfigures one’s beliefs away from those that create the illusion of ill health.  The churches themselves, scattered fairly evenly across the country, all feature “Church of Christ, Scientist” within their title. Profoundly influential in its early years, the Christian Science Church expanded to nearly a quarter million adherents by the peak of the Great Depression; its influence quickly spanned the six inhabited continents.

The influence hasn’t persisted. I’ve found widely varying estimates on the current membership, but most records suggest that it has declined by over half since its 1950 peak. American adherents probably number less than 100,000. The Mother Church remains a prominent landmark at the edge of Boston’s Back Bay, but how full is it during a typical service?   How many people make it to the Reading Rooms, for that matter?

Incidentally, my research on the subject disproved much of my initial assumptions: that Christian Science Reading Rooms were declining in tandem with the religious denomination itself. They really aren’t. Hundreds—easily over one thousand—remain in operation in small storefronts across the globe.  But The Mother Church in Boston is strategic about their distribution. Washington DC and New York still claim one downtown; Chicago doesn’t. My home city of Indianapolis had one downtown while I was growing up, but not anymore. (The closest one is in the northside neighborhood of Broad Ripple.) Elsewhere in the state, Evansville, South Bend and Fort Wayne still host Reading Rooms right in the center.

But if the church’s geographic reach is receding, how does the institution as a whole manage to keep up all these Reading Rooms? After all, if their chief purpose is to provide a spiritual respite, it’s hard to imagine that every location can offset the cost for personnel and rent through the sale of Bibles or Eddy’s books. My suspicion is that staffing costs are minimal due to the Reading Rooms’ limited hours: rarely is a single facility open more than five hours a day, while many operate only three and four hours. All are closed on Sundays.

While these limited operating hours offer one strong example of how the Mother Church minimizes staffing costs, they don’t offer any insight on real estate. Rent may not be too great of a burden in Evansville; Midtown Manhattan is another story. And it would be particularly hard to justify paying top dollar to lease a facility that only remains open approximately 20 hours a week. For that matter, how could the results of a cost-benefit analysis possibly favor a location in downtown Summit—an old streetcar suburb to New York City with a median household income well over $100,000? The city’s downtown, with a mix of restaurants, art galleries, home furnishings/design, and skin care products (among other things) certainly appears as prosperous as one would expect, given the incomes nearby. 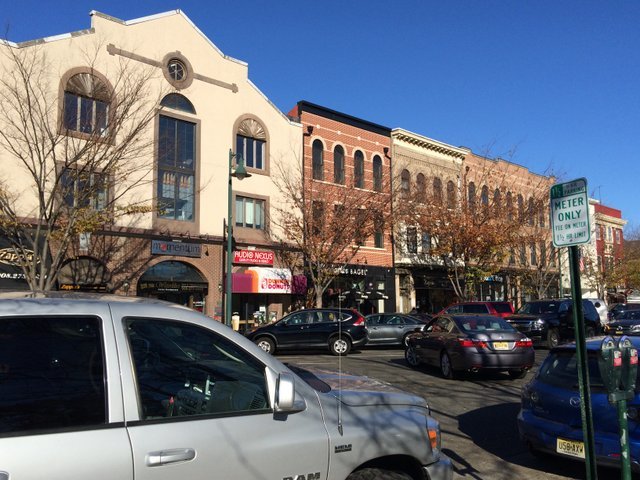 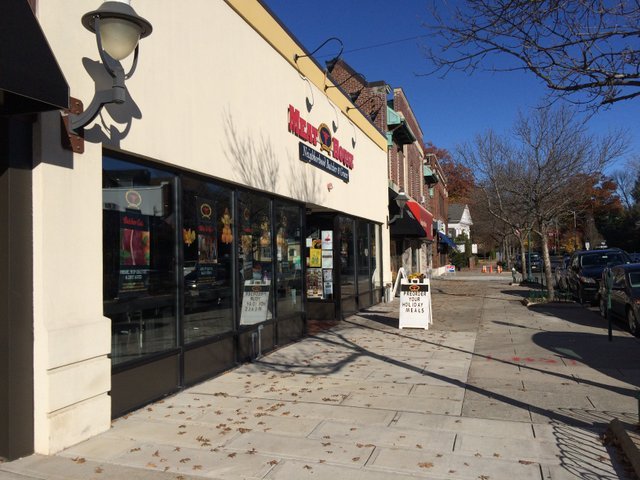 Much of it even falls within a national recognized historic district. 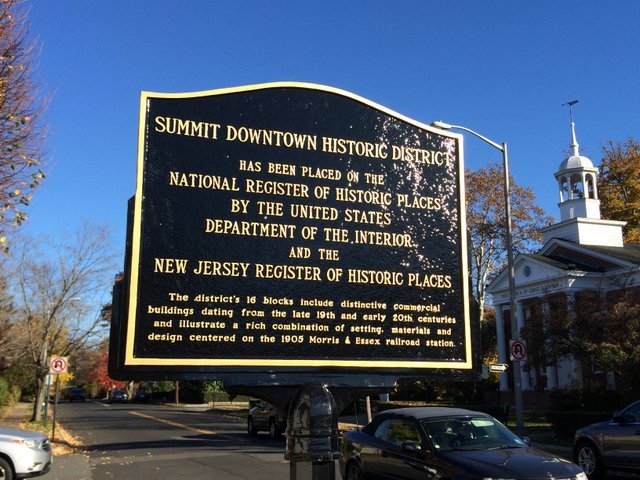 A healthy downtown like Summit benefits from all those passers-by, but that usually equates to an awfully high price tag. At least the Reading Room in Summit stays open longer than most—33 hours per week—but that’s still far fewer hours than the typical downtown enterprise. It’s hardly uncommon for niche retail (e.g., draperies, numismatics, metaphysical bookstores) to lease a small storefront, only to operate a few hours a week (or even “by appointment only”). But usually those niche offerings choose locations off the beaten path, where the costs per square foot are much lower. A Christian Science Reading Room is certainly niche in this day and age—it probably always was—yet here we have a storefront right on Summit’s main drag.

What is the Mother Church thinking? Truth be told, I don’t know. After scrolling a variety of Reading Room locations across the country, I simply cannot find a common thread. Considering that the Mother Church regularly opens and closes Reading Rooms, I suspect that the rationale is more nuanced than I’d ever surmise. Nonetheless, I can spot two other signifiers that might at least offer a clue as to why this pricey branch prevails, while many larger communities (with lower leasing costs) lack a location altogether. One of those signifiers adheres to the storefront window. 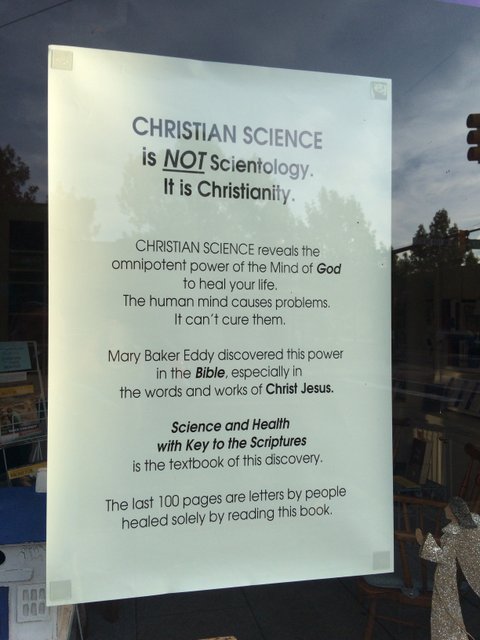 Holy cow! That’s an affirmation if there ever was one. Or is it a denial? Not surprisingly, due to the similarity of their names, people commonly confuse Christian Science with Scientology, the L. Ron Hubbard-founded religious movement based on his book Dianetics, which is best known for its popularity among Hollywood elite. The two belief systems both owe their existence to the writings of their respective charismatic founders, authors and promulgators, and they share an uncanny skepticism for modern medicine (though for entirely different reasons). But beyond that, they are completely different: Scientology, after all, makes no claims to Christianity. Scientology today enjoys a much higher profile—or notoriety—due the tabloid-grabbing utterances of such advocates as Tom Cruise. It comes as no surprise that Christian Science would seek to distinguish itself from Scientology. While Christian Science came under fire in the 1980s after the arrests of some parents who lost their children to treatable maladies for relying on prayer instead of modern medicine, such bad PR pales in comparison to the possible stigma linking Christian Science with a non-Christian practice that imposes a cult-like financial commitment to its members…as is the case with Scientology.  At the same time, the high incomes and elite professional standing of households in a town like Summit could make Scientology a more powerful lure here than, say, Newark. 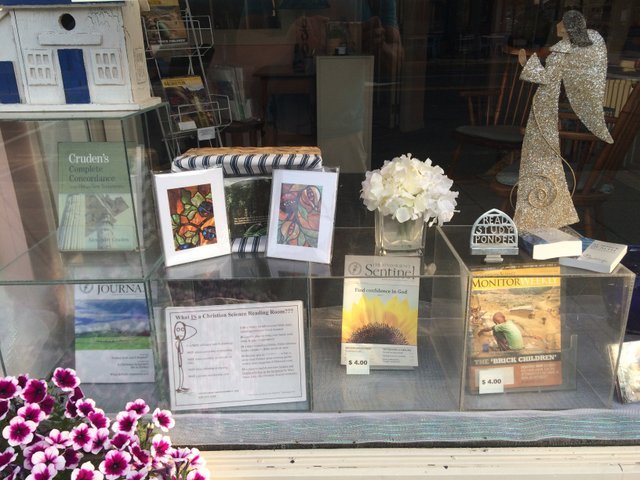 Besides the King James Bible and Mary Baker Eddy’s publications, the Reading Room offers most of the remaining literature commonly associated with the Church of Christ, Scientist—the best known of which by far is the Christian Science Monitor, founded by Eddy with the objective of offering contemporary journalism from a secular vantage point (though it does typically feature regular articles on faith in community life). No longer a daily print, the journal still regularly updates online, but it, too, operates at a fraction of the budget and personnel of most mainstream media outlets—and significantly fewer resources than it did as recently as 1995. I have to confess that one of the main reasons I find a Christian Science Reading Room worthy of mention is because I’m such a big fan of the Monitor for its resolute refusal to cater to breaking-news-style sensationalism or aggressively partisan reporting (which probably explains why its viewership pales in comparison to CNN, MSN or Fox. Not even a fair comparison. They’re completely different worlds.)

The presence of the Christian Science Monitor in the window of the Summit Reading Room underlines the ultimate objective of these quiet, quaint, quixotic little storefronts. Reading Rooms are there as the means of expanding awareness of Christian Science: its theological mission, its hermeneutics, its journalistic offerings. It’s a far more passive means of Evangelism than, for example, the mission-based approach embraced by the now prominent Church of Jesus Christ and the Latter-Day Saints (Mormonism). A member of the Christian Science Church would have little reason to step foot in a Christian Science Reading Room. These little shops intend to attract new followers to build their membership, or to shore it up from its continued decline—to stave off the complete marginalization of Mary Baker Eddy’s vision.

At last, it’s time to mention the other of those two signifiers that helps justify a Christian Science Reading Room in downtown Summit: a distinguished old church building a couple blocks away on the same street. 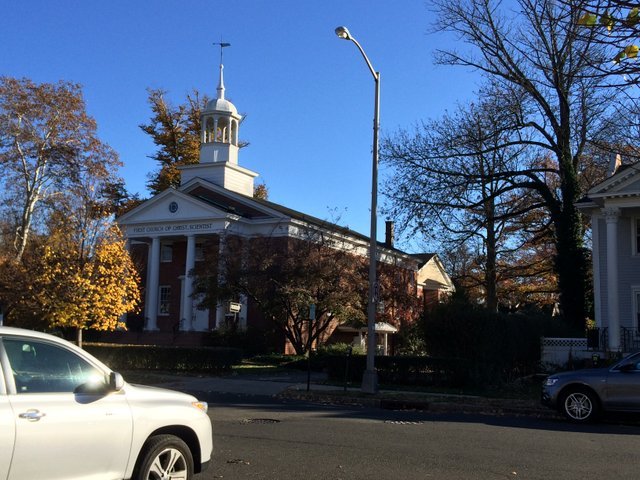 First Church of Christ, Scientist. At the very least, if pedestrians browse the literature at the Reading Room between 10a and 4p Monday through Friday (or 11a to 3pm on Saturday), they’ll soon learn that they don’t have much farther to go to attend a service on Sunday.

10 thoughts on “Among those ritzy restaurants…a Reading Room.”