As much as we herald the reurbanization of our big cities—the “return to the downtowns”—it’s just as commendable when it takes place along the main streets of small towns. And it’s often just as difficult to get it right. While one might expect the redevelopment of a parcel in the downtown of a large metro (over 1 million people) to court some controversy, sometimes the efforts in our crossroads villages can be just as fraught. Fewer passers-by may see that new construction proposed on the town square, across from the county courthouse—much less than at the site of a high-profile proposal in a big city. However, the fact that the development champions are far more likely to know the remonstrators in a small town—and to live within a mile from one another—can exponentially increase the likelihood of derailing a proposal.

Regardless of the size of the municipality, commercial centers in America declined precipitously in the second half of the 20th century, not just in population loss but also in the retraction of jobs, of investment, of wealth in general. It all migrated to the periphery, leaving a surfeit of underutilized and often decaying buildings. So communities large and small share the burden of recentralizing. And, like their big-city Central Business Districts, many smaller towns are re-emerging from the brink. 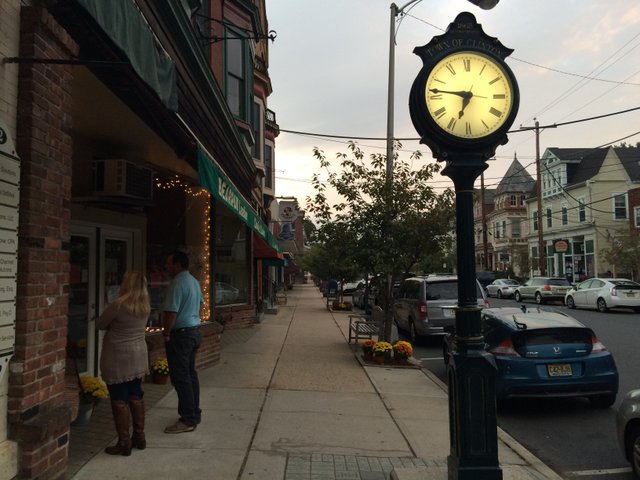 Clinton, New Jersey, a borough less than 60 miles west of Manhattan, whose adjacent township (and county prison) I explored last year, probably never declined in the same way most American main streets did. The borough itself counted 2,700 people in 2010—a peak that shows few signs of faltering, since the Census hasn’t recorded a population loss for the municipality since the 1920s. Founded in the 1830s, the town owes much of its 20th century population growth to the productivity of its two textile mills, sitting on opposing banks of the Raritan River. The “waterfall” used to power the mills remain a dramatic entry point to Clinton’s main street to this day, even though activists have repurposed both mills since their closure a few generations ago. 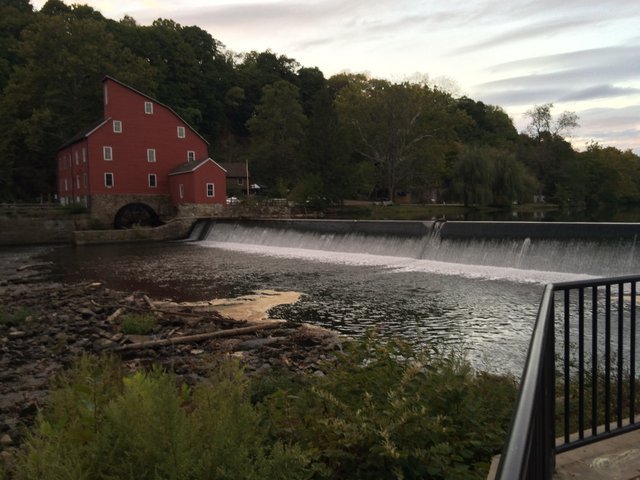 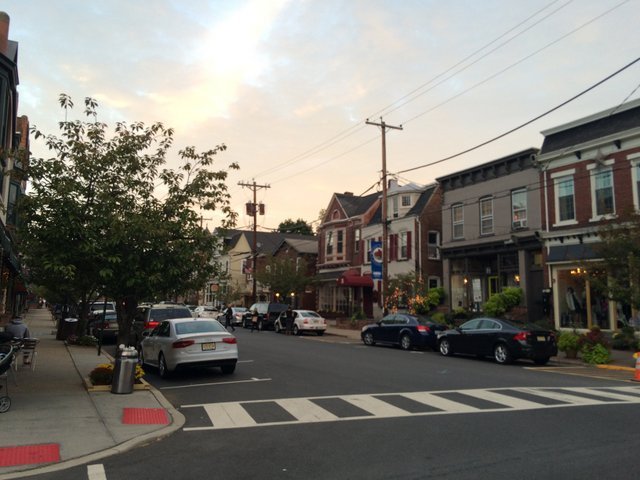 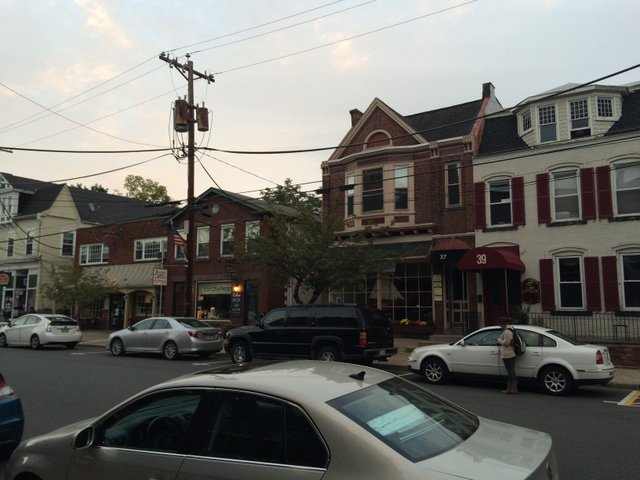 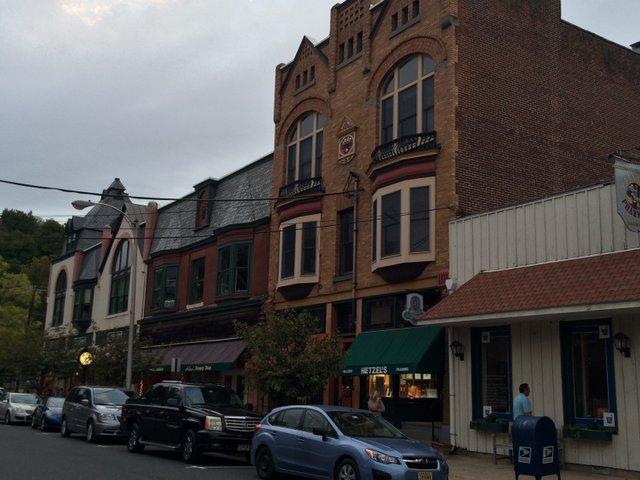 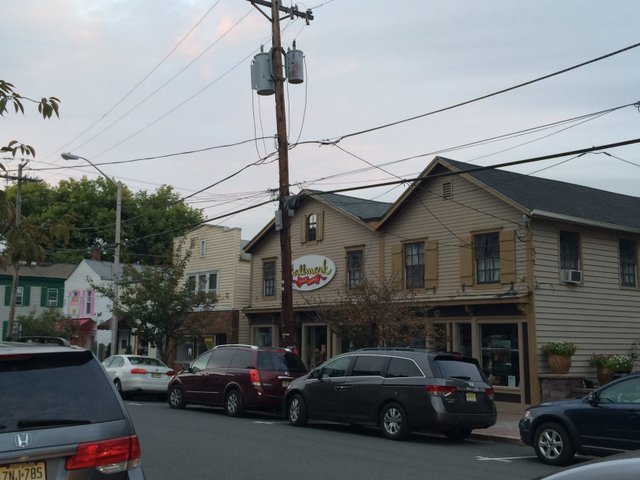 Not only do both sides of the street offer an uninterrupted street wall—no gaps where a parking lot replaced the buildings of yesteryear—but the occupancy rate of the retail spaces is high…all of it locally-run operations. Of particular interest is a cluster of impeccably maintained Victorians with restaurants at the street level. 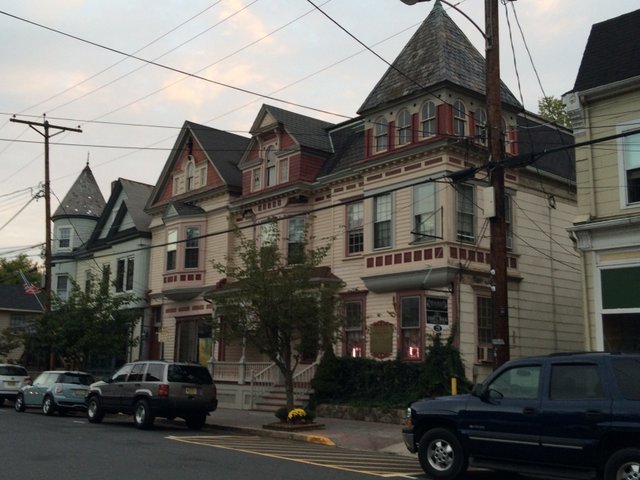 Truth be told, Clinton most likely dodged the bullet that felled so many downtowns in the 1960s and 70s—as well as the main streets of smaller municipalities in the 1980s. Even though Clinton began as an autonomous settlement based largely on river-generated industry, it didn’t come of its own until the 1960s, when the rampant suburbanization of New York City and its inner ring New Jersey suburbs helped Clinton assert itself as an exurban bedroom community. To this day, despite the fact that the Raritan River bisects the town, Clinton lacks a stop on the NJ Transit Raritan Valley Line (that bragging right goes to the neighboring community of Annandale). The construction and expansion of Interstate 78 through the 1960s and 70s no doubt abetted Clinton’s growth, since it cuts through the southern portion of the borough, and Clinton features prominently in the signage across much of the interstate’s trajectory in northern New Jersey…disproportionately so, considering the size of the borough. But I-78’s completion elevated the town’s profile: from Clinton, it’s a straightforward and convenient jaunt to Newark and the Holland Tunnel.  Affluent households from crowded suburbs to the east saw the tidy rural village as a reprieve. Therefore, while a preponderance of old commercial centers (large and small) suffered from increasing decentralization during the second half of the 20th century, Clinton’s role as a recipient community for all the outmigration allowed it to stave off most of the decline that befell so many cities with primarily pre-war residential and commercial architecture. Its main street may have been just as passé as the primary corridors in Hoboken and Manville, but its location in the purlieus gave it a considerable advantage.

Nonetheless, subtle visual clues suggest that a community as consistently attractive as Clinton underwent some redevelopment during the nadir of the American main street. Take this vista, for example: 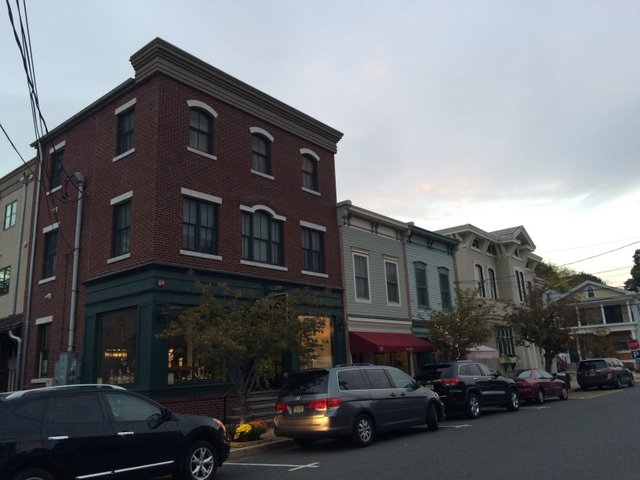 The building on the left doesn’t quite fit, and it’s not just because of its size. The cornice is comparatively unadorned, particularly juxtaposed with the wood-frame structures to its right. The semielliptical arches over the windows also lack ornamentation. But, perhaps most tellingly, the masonry is too light, too smooth and too unweathered—it all suggests new (or at least considerably newer) construction than the majority of the buildings along Clinton’s Main Street. But one other thing captures the attuned eye, even though the photo is regrettably blurry: 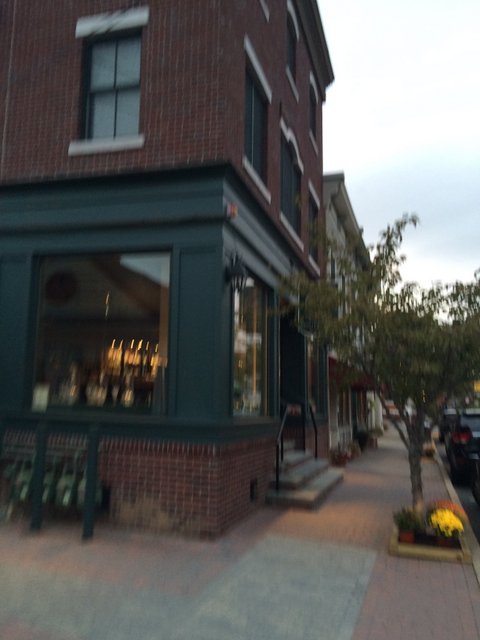 As appealing as this classically mixed-use building may be, the renovation seems to have neglected a critical contemporary component: a means of access for persons with disabilities. Like most of the buildings in Clinton, the first floor is not flush with the street, and patrons of these businesses must climb a few stairs to enter. Fortunately, the side of the building offers recompense: 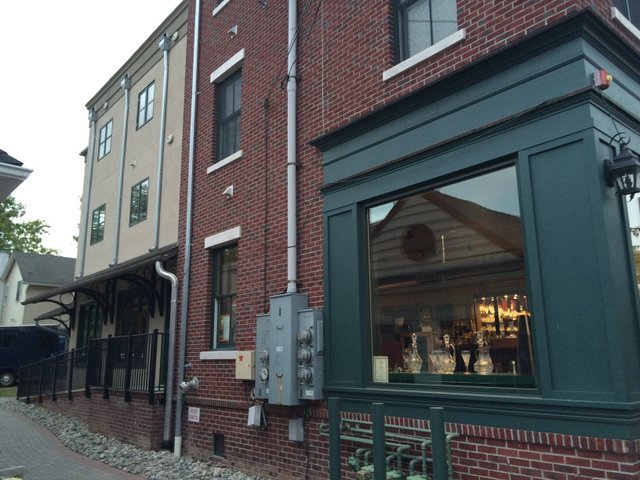 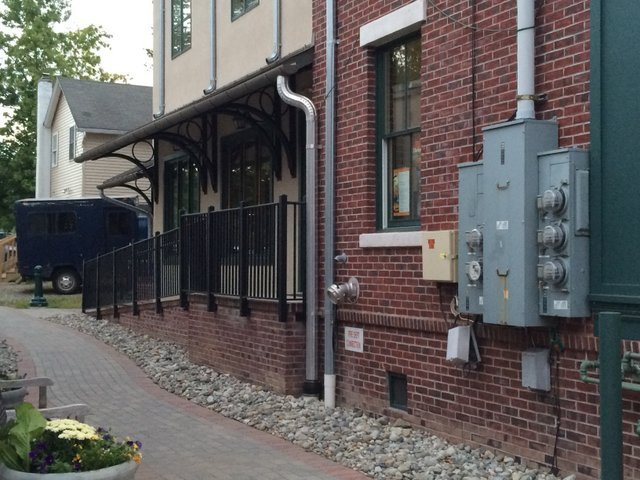 A small brick path between the buildings leads to a separate stairwell and a wheelchair ramp. 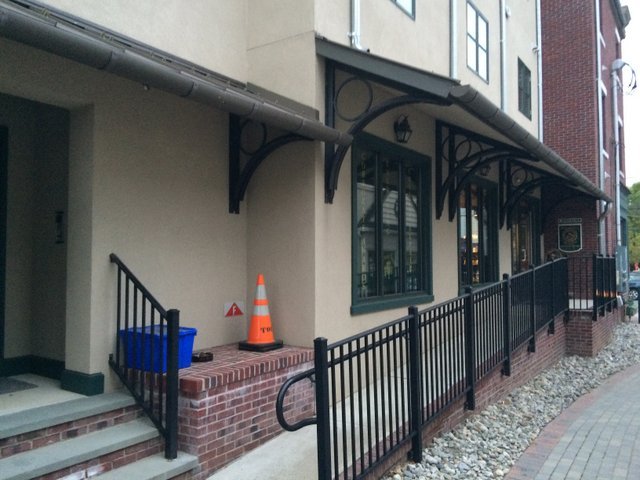 I’m not certain whether this building is completely new construction or simply an elaborate rehabilitation of the original structure, complete with a replacement brick façade. Regardless, it reveals the sort of horse-trading necessary to restore (or to retain) the integrity of a main street. Like all the other buildings in Clinton, this one originally lacked any reasonable accommodations for wheelchairs—a byproduct of its late 19th century construction. Whether the developer restored the original structure or simply rebuilt in the spirit of downtown Clinton, the Americans with Disabilities Act (ADA) requires modifications that allow wheelchair access to commercial buildings. But to place a ramp directly adjacent to the stairs at the storefront would not only weaken the historical similitude, it would probably hurt the marketability of the retail space. So the builder slyly inserted it on the side of the building. 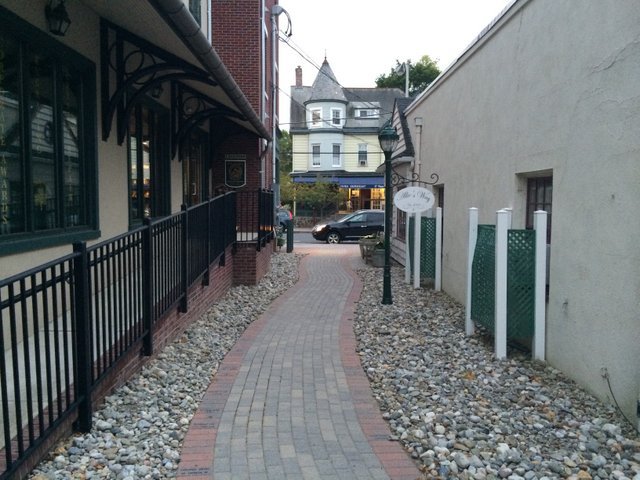 I’m uncertain whether the ramp accesses the storefront or the accessory uses in the back of the building, but it could just as easily—and should—allow ingress to both. Regardless of the internal circulation, I’m willing to venture that this redevelopment proposal underwent far more scrutiny than the approximately hundred years of life for the edifice that preceded it. A borough as well-positioned as Clinton can afford all the extra work to get it right, but what about urban infill in the main streets of America that lack such investment potential? And what about the equally disinvested larger cities, for that matter? While we may have turned a corner in our collective fondness for urban environments, infill redevelopment has a ways to go before it approaches the mainstream…particularly when it involves an attempt to replicate the past, but within contemporary regulatory constraints.

PrevTearing down southern California’s tribute to a bygone era (circa 1950).
If a tree grows in Brooklyn, then Queens can claim an entire garden.Next