If a tree grows in Brooklyn, then Queens can claim an entire garden.

When a settlement grows suddenly and rapidly, it’s common for the new development to completely overwhelm everything that preceded it: not just for the older settlement to get engulfed in the new, but for it to disappear completely. It’s happening all over the fast-growing areas of the American southwest, particularly states like Texas, where formerly rural ranching communities disappear amidst the burgeoning suburbs of Dallas—democratically and organically, of course. The ranchers voluntarily sell their land.

A similar phenomenon took place in America’s largest city…except that it was roughly a century ago. 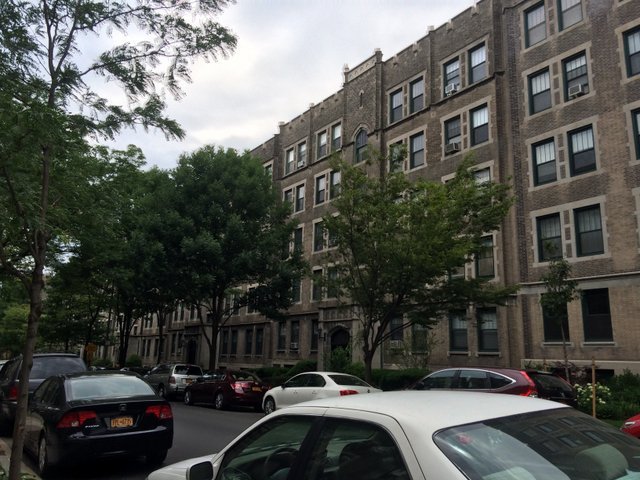 Jackson Heights, a neighborhood in Queens just four miles from the Ed Koch Queensboro bridge, capitalized on the escalating demand among the city’s middle class to escape from the crowds from Manhattan. How did the Queensboro Corporation provide a reprieve from Manhattan’s density? By bestowing upon Queens something almost as dense. 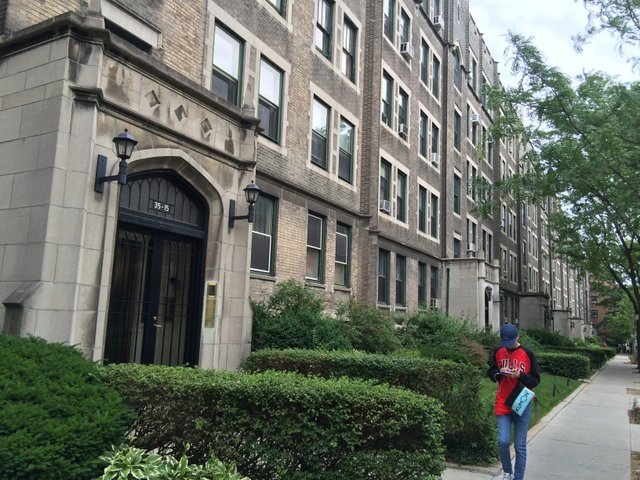 The real estate company headed by Edward A. MacDougall devised a shrewd method of reconciling high land values with an urban population’s thirst for leafy oases, largely through several august co-op apartment buildings modeled loosely after the Garden City Movement, first proposed a generation earlier by Ebenezer Howard in the UK. Each of these buildings, constructed from 1916 to 1928, boasts a cooperatively managed courtyard in the middle of the block. The apartments remain the premier real estate of the neighborhood, nearly a century after construction. 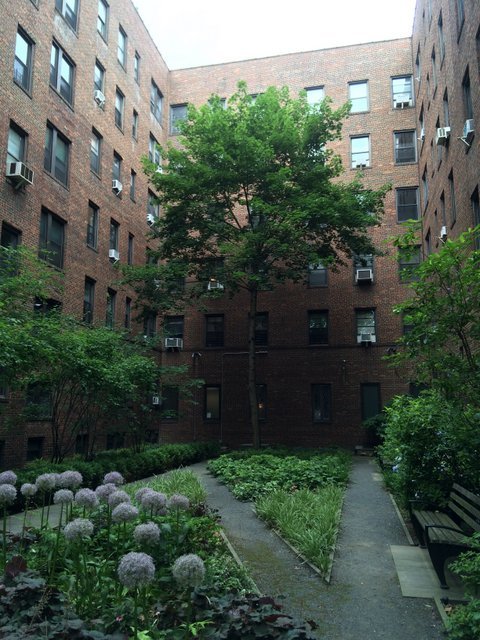 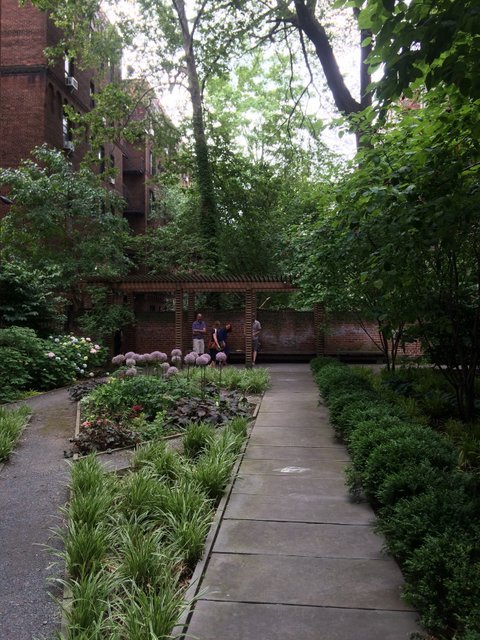 Even Google Maps accounts for the greenery on the interior blocks, seen below: 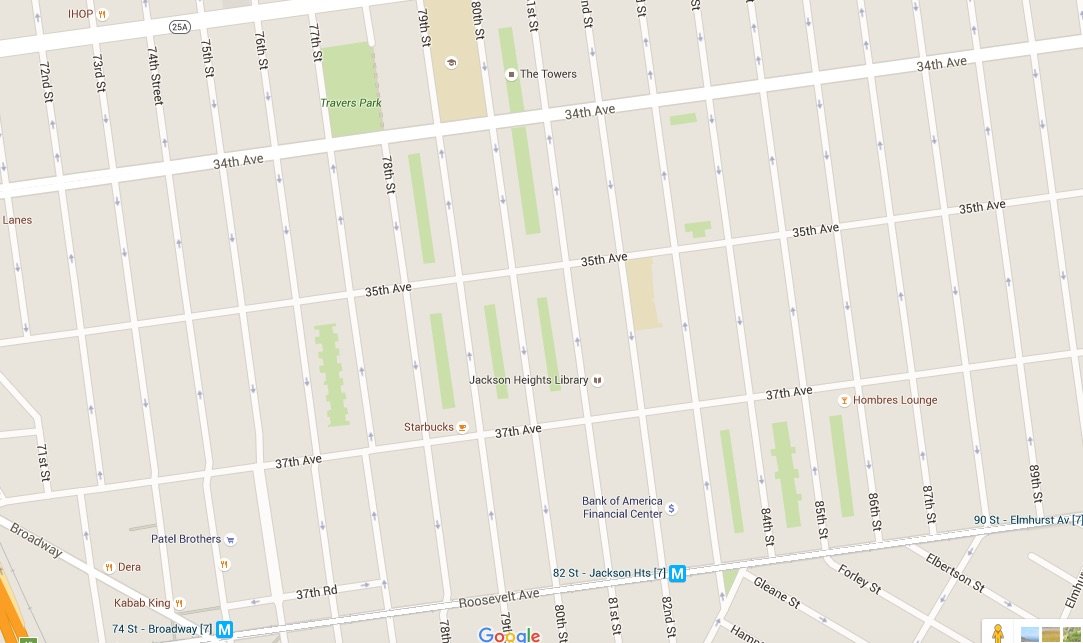 But the look of Jackson Heights is far more variegated than these proud edifaces suggest. The co-ops comprise only a small portion in the heart of the expansive district, while the fringes of Jackson Heights, which developed shortly thereafter, include much more conventional rowhouses and twins.  The easternmost blocks of the neighborhood feature duplexes and single-family homes on one-sixteenth-acre lots. Without a doubt, the overall settlement pattern in Jackson Heights is rarefied in comparison to Manhattan, particularly in light of early 20th century efforts to reduce extreme overcrowding among the island’s many tenement buildings. These homes, just a few blocks down from the Queensboro apartments, at least boast a little greenery in the front yards that would be virtually impossible to find on that jam-packed little island to the west. 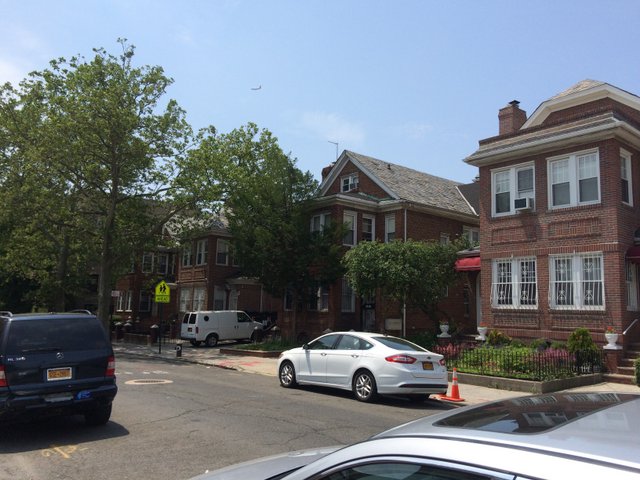 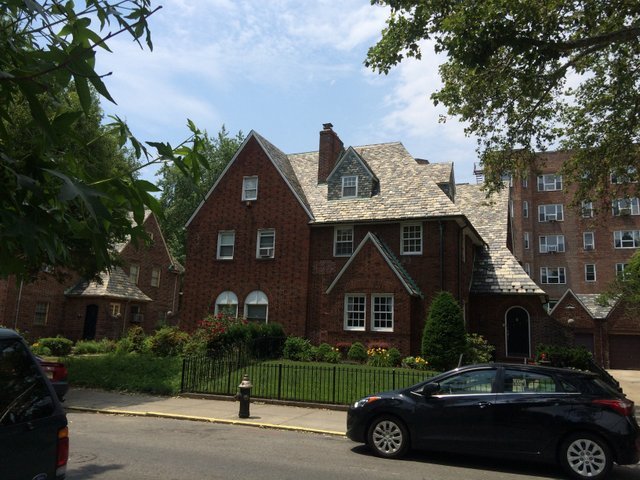 But Jackson Heights is still disproportionately dense compared to just about anywhere else in the country. The most commonly agreed upon boundaries to the neighborhood (coterminous with the 11372 zip code) would place over 63,000 people within approximately .7 square miles.  All in all, when accounting for the portions of Jackson Heights that stretch into adjacent zip codes, this well-known district hosts nearly 110,000 people, making it about the 270th largest city in the country, if it were a sovereign political entity.

It isn’t a municipality of its own, but it sure sprung up quickly….just like real municipalities Gilberts, Arizona, Henderson, Nevada, or New Braunfels, Texas have in more recent years. In most respects, it would seem inappropriate to compare a neighborhood in Queens to anywhere in the sunbelt. But Jackson Heights emerged fully in deference to the suburban ethos, albeit in a time period when so little of the country of was urbanized that suburbia was a novel consideration. Most Americans in the 1910s lived either in tightly knit, densely populated cities, or small towns and farmsteads—with little in between. Jackson Heights, however, owes its existence to decentralization, and for its time, these courtyard apartments were revolutionary, not just for the cooperative management but for such an aggressive push into the frontier. 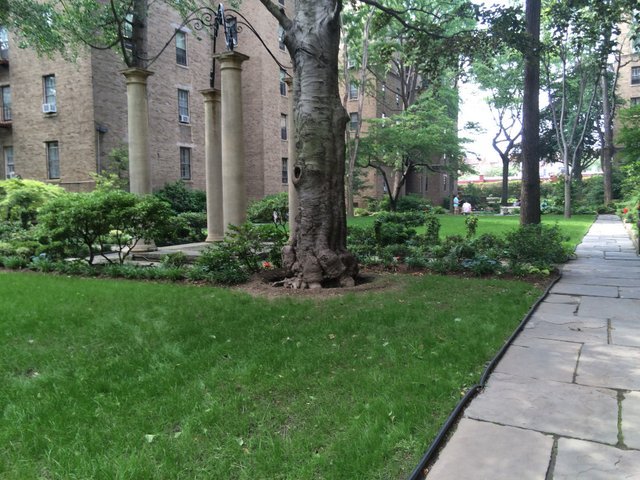 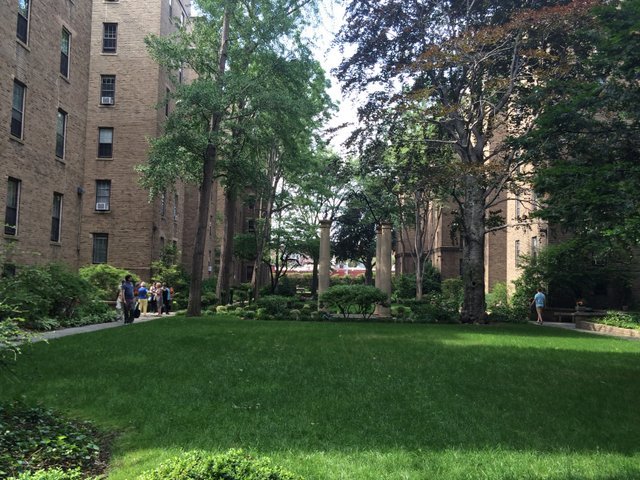 Today, of course, it’s hard to conceive of Queens as suburbia. It sure doesn’t look like most of what we’d consider the suburbs: the housing is too old and closely packed together. Even the areas outside of the Jackson Heights Historic District still claim a particularly high density. 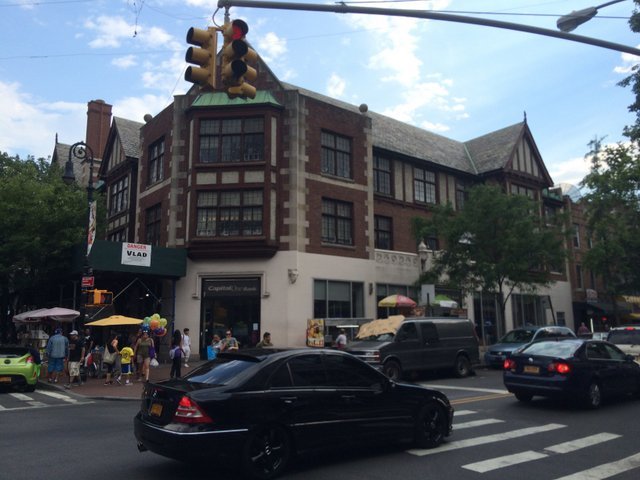 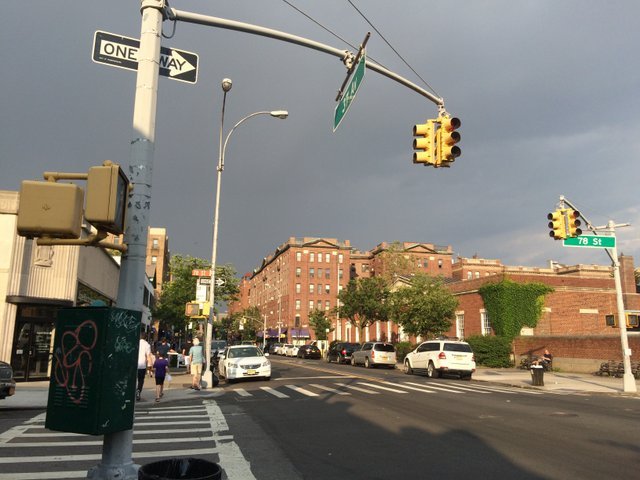 But then, at the northwestern corner of 81st Street and 31st Avenue, we encounter this: 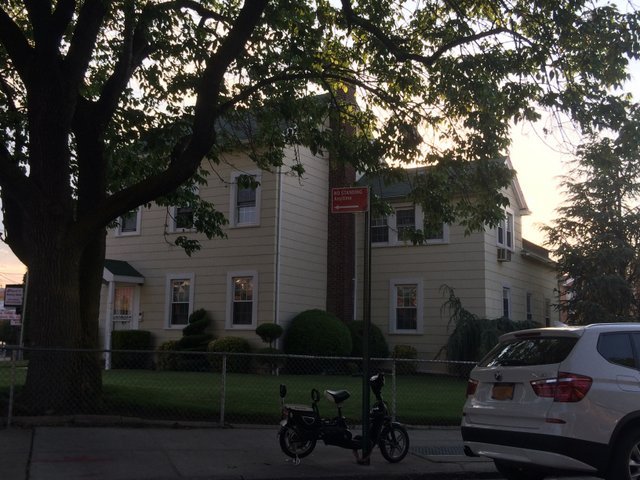 A fairly conventional single-family detached house with a clearly defined yard. And it’s a complete anomaly. Pan to the right— 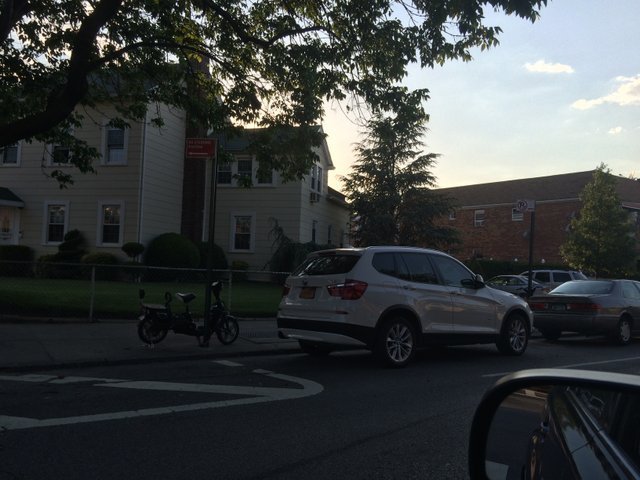 –more attached housing. And again to the left– 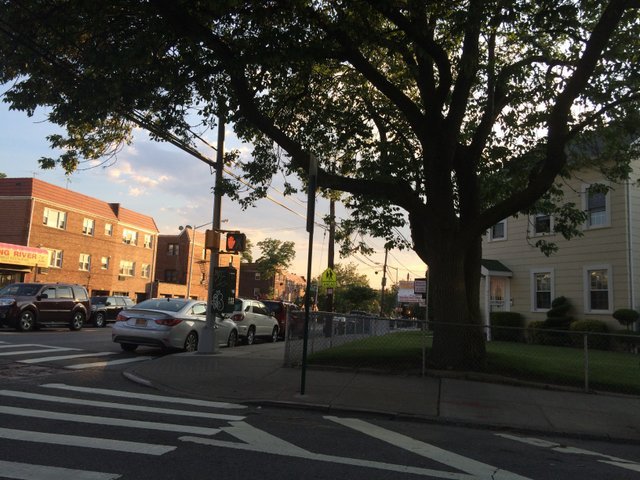 –the same. In fact, you can place yourself in the neighborhood through Google Street View and deduce that there is nothing else like it anywhere in Jackson Heights.

How did a developer snag such a big parcel for a seemingly suburban house? Who could afford this patch of land to build a 1960s-era house, when real estate in this geographically constrained city is so pricey?  (After all, even in 1910, the Queensboro Corporation had to build bulky, dense apartment buildings to recoup its investment.  The land was just too valuable–and car ownership was too uncommon–to build low density.) My discovery of this unusual house is anecdotal. I learned about it by attending the Historic Jackson Heights Weekend sponsored by the Jackson Heights Beautification Group, which offers self-guided tours of the great apartment courtyards—the only weekend a year when the green spaces are open to the general public. Elsewhere amidst the weekend’s events, various institutions host historical discussions and exhibitions.   In the community room of a church, I encountered this book on display: 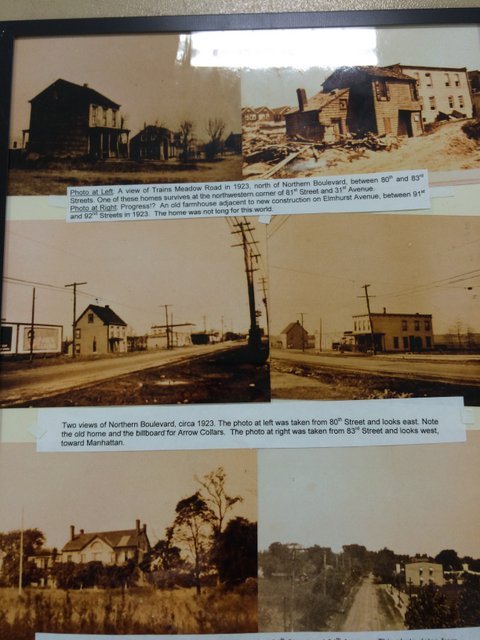 If you can’t read the first caption, it says this: “A view of Trains Meadow Road in 1923 north of Northern Boulevard, between 80th and 83rd Streets. One of these homes survives at the northwestern corner of 81st Street and 31st Avenue.”

That’s right: that two-story dwelling actually predates all the work by the Queensboro Corporation. It’s probably at least 125 years old—a generation or two more than everything else around it. Yet the architectural language and urban form suggest a suburban effort, long after the Levittown explosion of the late 1940s and early 50s. This modest yellow house with the magnificent tree out front most likely served as a farmstead at the turn of the 20th century, resting on a considerably larger tract, the majority of which the owner subdivided during the development boom in the 1910s and 20s, all while keeping the tiny plot of land that allowed the home to survive. It’s a marvel that subsequent generations didn’t tear it down: after all, the parcel could easily host a six-unit condominium complex, or more. 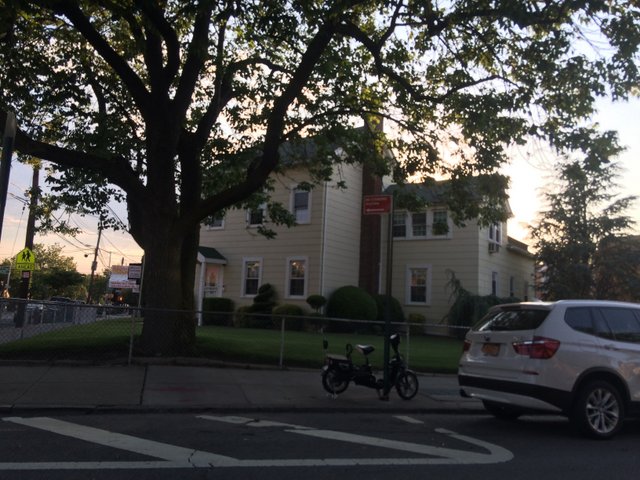 Thus, this well-maintained, thoroughly conventional home is the clear anomaly. But it’s not a byproduct of poorly regulated, suburban-styled infill; it’s actually the oldest thing left standing for miles. Jackson Heights emerged as a respite from Manhattan’s clamor, but only within the standards for New York suburbia in 1915. From today’s standpoint, Jackson Heights feels resolutely urban. Meanwhile, when suburbia first emerged as the dominant American settlement pattern in the 1960s, we witnessed the construction of homes a lot like this one at 81st Street and 31st Avenue, which was originally a rural outpost surrounded by farms. Economically healthy urbanism has expanded and receded in tune with shifting cultural tastes, and the fact that we’re enjoying a resurgence in urbanized living at this moment offers no guidance on what our communities will look like two generations from now. Sure, we see lots of downtown apartment construction at the moment, but who’s to say that, in thirty years, we won’t look at these buildings with the same derision that we viewed rowhomes in the postwar era of Levittown? Perhaps most American cities will veer toward the density levels of Manhattan—or at least Queens. Then again, maybe we’ll morph into the Frank Lloyd Wright ideal, evenly distributing ourselves across the countryside, in homes like the one above, but once again on 5-acre tracts. Nothing in metro NYC—or anywhere, for that matter—can help us predict what the optimal community will look like in half a century. At the very least, every June, Manhattanites can still appreciate the carefully cultivated verdure of the Queensboro apartments in Jackson Heights.  But at least a few of the residents of these stately buildings may throw a jaundiced glance at the homes up in Westchester County…with their driveways, garages and fenced-in yards. Or, if they want at least a hint of real suburbia, they can just swing by 31st and 81st…and marvel at an 1880s farmhouse, still going strong in the middle of impervious Queens.

PrevSmall town urban infill: more than just replacing the baby teeth.
A suburban hand in an urban glove. But does it fit?Next

One thought on “If a tree grows in Brooklyn, then Queens can claim an entire garden.”