When churches spin many plates…and not all of them for collections.

The affluent, outlying streetcar suburb of Chatham, New Jersey offers a picturesque two-block downtown, which features what would likely come as a surprise to the unattuned. 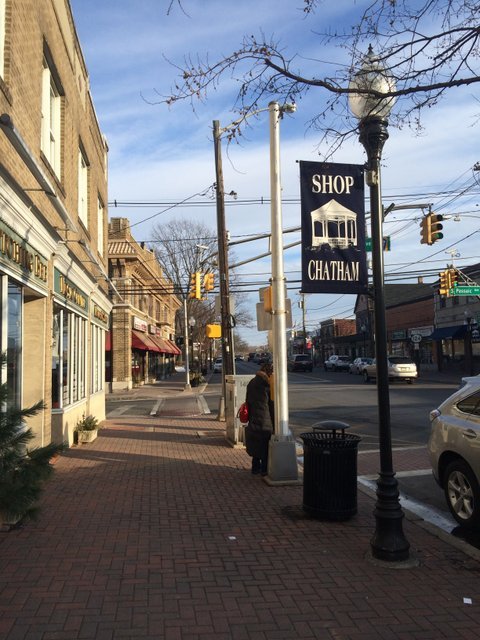 Sure, many of the storefronts are predictable: comic book shop, jewelry and watch repair, alterations, a few restaurants, dry cleaners. And, right in the middle of it all: a somewhat newer-looking church. 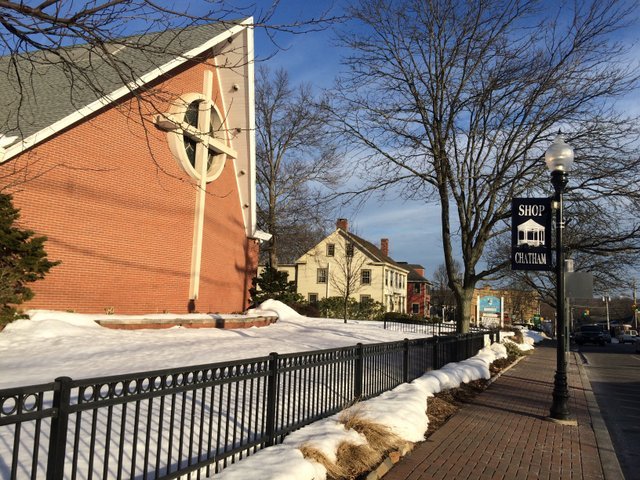 The presence of a church on a main street isn’t so surprising, nor is the fact that it’s contemporary looking: after all, many denominations were still expanding, renovating or remodeling their existing real estate during the salad days of the 1950s and 60s. Even less surprising is that the church in question here is Episcopalian. 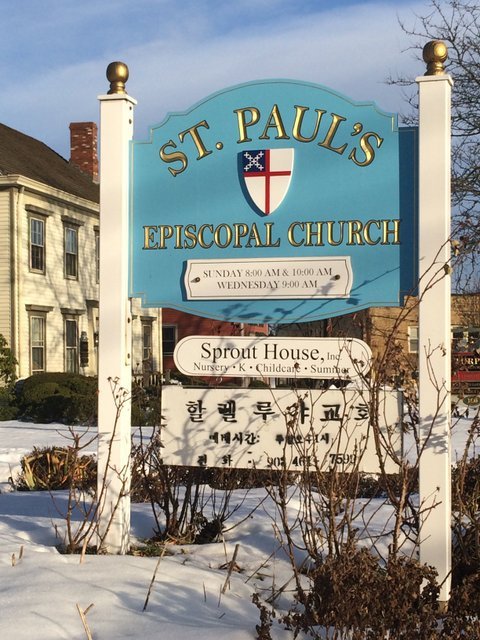 Mainline Protestant denominations like The Episcopal Church of the USA (TECUSA), Evangelical Lutheran Church of America, American Baptist Church, and Presbyterian Church USA are all hallmarks of these affluent old suburbs. In many cases, the congregations from these moneyed institutions were among the first to settle in the borderlands of large metros; places like Chatham owe their existence to like-minded individuals departing their old urban neighborhoods (either New York City or Newark, in this case) and staking a claim on the frontier. What better way to assemble a group with similar values and income levels than under the auspices of a church? To this day, even while Mainline Protestantism has lost ground to Evangelicalism, the suburbs continue to house their venerable limestone buildings, complete with bells, steeples and big red doors. Sure, the buildings might look quite different from when the pioneers built them back in the early 20th century, but the prevailing ethos survives under their variegated belfries. St. Paul’s Episcopal Church is hardly a shocker.

But take a look at that sign again. Just below the main placard—slightly obscured by the shrubbery and brambles—is a smaller black-and-white one. It’s in Korean. And roughly the same orthography hangs from another sign on a wrought-iron gate just a few yards away. 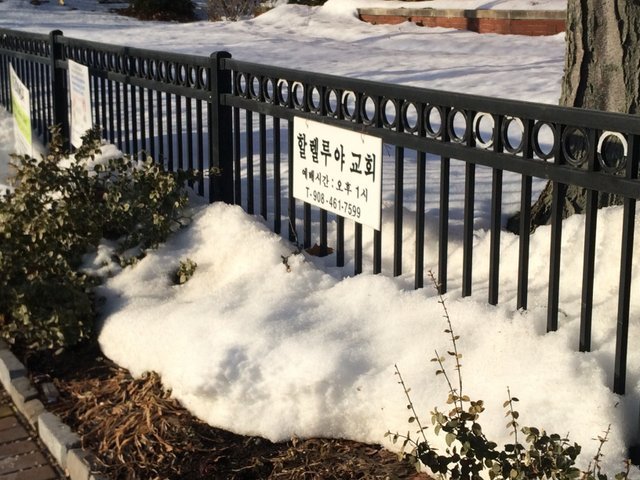 It takes a little digging, but research eventually bears fruit. As is often the case, St. Paul’s Episcopal shares—or, most likely, subleases—its space to another congregation: Hallelujah Korean Presbyterian, who uses the same sanctuary on Sunday afternoons, after the Episcopal congregation’s Holy Eucharist has ended.

What was once a phenomenon relegated to large, cosmopolitan coastal metros is now just as easy to spot in Middle America and should prompt anyone to look closely for the smaller sign underneath the big one at any prominent church in the neighborhood. It simply represents another revenue stream for the “parent” church, while giving the more recently established “disciple” church (nearly always a fellowship of immigrants, with services typically conducted in the language of the mother country) an attractive, spiritually inspiring setting for its ministry, without the costs associated with financing and maintaining real estate. The arrangement fits like a hand in a glove, or a surplice on a robe. But two aspects of the St. Paul’s arrangement may seem a bit odd: first, an Episcopal Church is pairing with a Presbyterian (PCUSA). Perhaps this isn’t that radical; after all, both denominations are part of the World Council of Churches and share many views on contemporary social issues. They are not, however, in full communion with one another. And besides, I’m not aware that the Anglican or Episcopal Church has ever had much of a presence among Koreans (the Anglican Church of Korea is very small), while Presbyterianism among Koreans is common. Secondly, the sign for the Korean church has no English whatsoever. This surprises me a bit more, since it suggests that the Hallelujah Presbyterian makes no effort to appeal to second or third-generation Korean-Americans, whose fluency in Korean is far less likely. I suspect that many of the congregants at Hallelujah Presbyterian speak Korean as their preferred language—not unusual in New York City or its closer suburbs, but atypical for a place as far flung as Chatham.

The seemingly symbiotic pairing here could very well belie a tough reality: that the Episcopal congregation needs the Korean Presbyterians more than vise versa. Like virtually all of the older established Mainline denominations, TECUSA has seen its Sunday attendance plunge since the early 1960s, and even its demographic self-assessment recognizes how senior citizens dominate most of the churches. 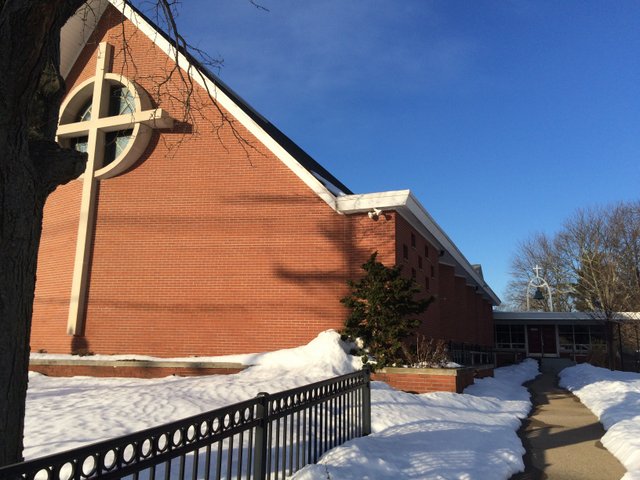 I don’t know anything about those who attend St. Paul’s in Chatham, and the church may very well boast a supportive, demographically robust congregation. It would be unfair for me to speculate on any church’s finances. But relatively few Mainline Protestant churches have grown in the last fifty years, and, despite the fact that most Mainlines boast above-average median incomes, the low birth rates and patchy attendance does not augur well for the weekly collection plate. Their buildings, most of which are over a half-century old, require extensive upkeep, and virtually all have staffing considerations beyond the rector or vicar. Bearing in mind that the number of churches has grown (even as religious affiliation in America has declined) , it should come as no surprise that these churches sublease their sanctuaries to other congregations—particularly immigrants who may just be starting to establish a toehold in the region.

But splitting a church between two congregations is just one solution of many. Notice some of the other signs along the gate at St. Paul’s. 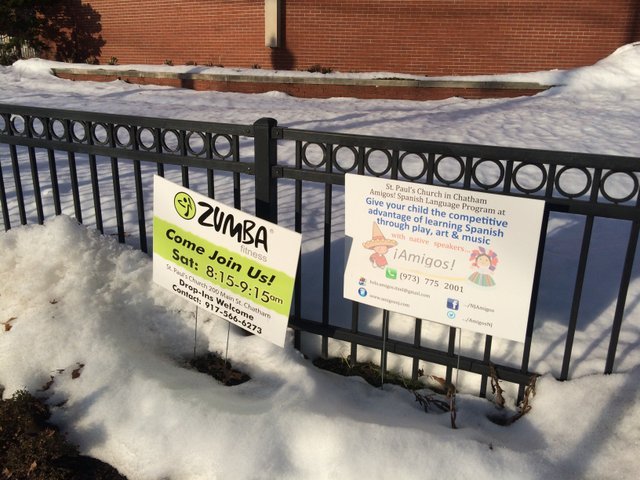 The advertisement on the right, for the ¡Amigos! Spanish Language Program shows an appeal not just to children but to the local Spanish-speaking community, while the Zumba ad on the left indicates that “drop-ins [are] welcome”, suggesting that it isn’t necessary to be a member of the church to participate. These programs reinforce the notion that St. Paul’s Episcopal strives to be a more generalized community resource, not just as a house of worship but also as a center for alternative education and physical fitness. Perhaps it is this comparatively modest institution’s means of competing with a powerful megachurch nearby, where the hulking facilities (or campuses) offer additional educational services as well as a fully operational fitness/wellness center. Maybe St. Paul’s is reinforcing the principles of the church as a village centerpiece, which may have at one time been a viable claim, when Chatham was a relatively isolated streetcar suburb in the countryside (if St. Paul’s Episcopal Church was party to the borough’s founding and incorporation over a century go). Now, Chatham hosts multiple churches within its 2.5 square miles, and extensive suburban development surrounds it. Nonprofit though they may be, churches inevitably compete with one another.

The best guess is that these offerings—the partnering with Hallelujah Korean Presbyterian, ¡Amigos!, and the Zumba classes—are all methods of both generating awareness of St. Paul’s Episcopal Church, and, ultimately in growing their own congregation. Since TECUSA does not generally prescribe to outright evangelism in the same manner endorsed by Evangelical denominations, these strategies offer a soft influence that, optimally, well help this and any other Episcopal Church remain viable well into the future. After all, complete stability is unrealistic; failure to grow often translates to shrinkage. Numerous churches have declined to the point of closure, leaving interesting, often iconic, but sometimes obsolete buildings in their wake. And not all of them find new congregations. Sometimes they go a completely different route, like this one in a completely different part of metro New York, near Freehold, New Jersey: 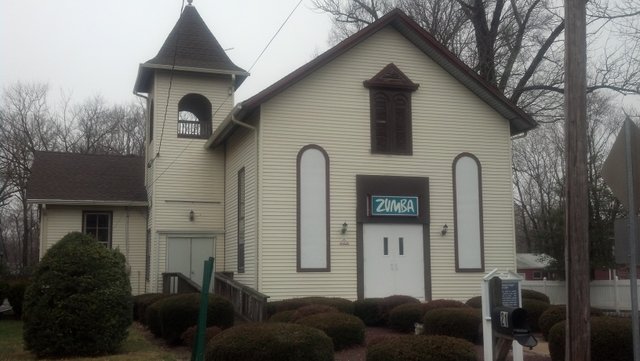 Maybe Zumba is the next American religion.

4 thoughts on “When churches spin many plates…and not all of them for collections.”