Teardowns: more than just an antidote to architectural monotony.

I recently featured a photomontage of teardowns and realized that, as powerfully as the images can speak, I’ve hardly plumbed the depths of this rich subject. Many other visuals await. In the weeks ahead, I’ll reveal my first blog post from a U.S. state I have not yet featured (and haven’t visited for almost twenty years), but until that article on The Golden State comes out, I can at least whet the appetite with some ponderings on teardowns in the Empire State. 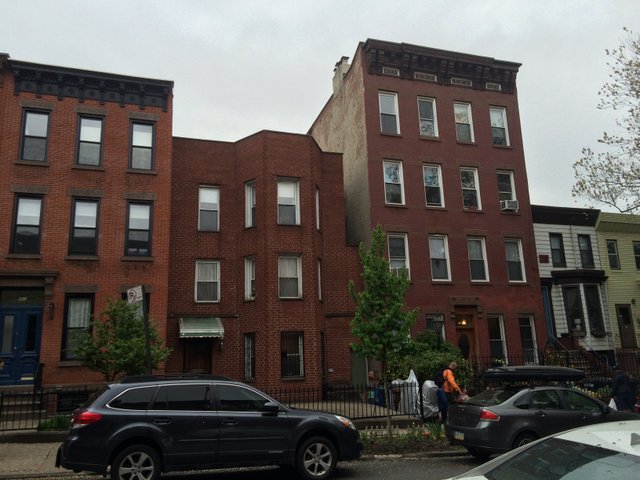 These dwellings in the Park Slope neighborhood of Brooklyn offer at least three architectural styles, in terms of what easily fits into the camera frame. It’s hardly characteristic of the area, especially since, only a block or two away (closer to Prospect Park), the Park Slope Historic District offers one brownstone after another with nearly complete architectural uniformity.

So what happened here? Did the developers who originally platted the land into these strict grids decide to mix up the language of design, for the sake of variety? Of course not. The buildings simply come from a variety of time periods. Note how the single four-story structure in the photo has a completely blank party wall on the left side, suggesting that, at one point in time, its neighbor had a complementary massing. The original builder never intended for that party wall to remain exposed. So why did the replacement building (the one with the bay windows) not even bother to align with the old party wall? Probably no more deep of a reason than the successive homebuilder lacked the money and the desire to build all the way up to four stories. I’m sure old Sanborn maps and tax assessment data would reveal the history of the much more contemporary infill, or, for, that matter, the wooden, balloon-frame houses on the far right of the photo—rowhomes far more typical of Staten Island than this part of Brooklyn. But, even without historic records, speculation can get your far.

Similar to the wealthy of suburbs of Chicago, Park Slope (at least on this block) offers a palimpsest landscape—one that has been written over from successive teardowns at various points in time, with each new edifice reflecting architectural tastes of that moment. Sure, the teardown erodes the integrity of a historic district, but it replaces it with a polyglot aesthetic that offers its own appeal. And who exactly knows why the original brownstones faced the wrecking ball? While Park Slope is extremely desirable now, it wasn’t always that way. In the 1960s it was the site of escalating tensions between newly arrived blacks and Latinos, working-class Italians, and the older established Jewish and white Anglo-Saxon Protestant households who had begun moving out. Sometimes the tension escalated to street violence, and arson was not uncommon. My suspicion is that this block in Park Slope owes its variegation more to social unrest spawned from economic decline than rising property values. A house (or two, or three) caught on fire, the rubble got demolished, and, since the neighborhood remained relatively high demand even when it was at its nadir, a newer, cheaper infill redevelopment quickly replaced the vacant lot…way back in 1970 or thereabouts. The gentrification for which Park Slope is known today—it’s one of Brooklyn’s most coveted neighborhoods—only came much later. By 2016, it has almost ossified once again into a stronghold for the wealthy. But during those times of considerable socioeconomic change, the built environment responds in kind.

PrevBoundary battles over sparklers and smokes?
When churches spin many plates…and not all of them for collections.Next