Tearing down southern California’s tribute to a bygone era (circa 1950).

Americans have never really valued housing for its permanence—certainly not like we see in many other, older settled lands, where it is common to find private residences that predate our little Declaration of Independence. It baffles most Europeans that a structure in the US can qualify for listing in the National Register of Historic Places when it is only fifty years old. Wars in Europe have lasted longer than that.

Even considering the comparative youth of most permanent settlements in North America, the US really hasn’t really cherished older housing stock. By 1945, many cities in Central Europe bade farewell to commercial centers that had survived over half a millennium—reduced to rubble from Axis/Allied bombing—yet their postwar restoration efforts often reveal such a commitment to the prewar aesthetic that you’d barely spot the shelling. Go to Vienna and see how difficult it is to distinguish the genuinely old from the reconstructions of the 1960s. Meanwhile, at the same time, the United States commenced a deliberate, strategic demolition of the oldest housing stock in its central cities, euphemistically branded Urban Renewal, though most laypersons would have called it slum clearance. Few of the homes and commercial buildings demolished in the 1960s and 1970s were more than a hundred years old; many dated from the early part of that same century. However, shifts in consumer tastes, automobile access, prejudicial desires for ethnic homogeneity, and a burgeoning aspiration (and capacity) for ownership of a single-family detached home—all of these helped to galvanize the notion that the homes closest to downtown were not just unappealing, they were obsolete.

The prevailing mentality—that housing is ephemeral and disposable—could lead to the conclusion that Americans are fundamentality fickle, consumption-driven and profoundly wasteful. While evidence exists to support such accusations, the reality is more complicated. Americans have long preferred wooden housing using balloon-frame construction—two practices that seriously impinge upon a home’s survivability beyond a century. Wood was abundant in this heavily forested continent, so it was easy to come by and affordable. But why use less durable construction practices? Quite simply, Americans see housing as a commodity and an investment—or, to mitigate the potential oxymoron, an investment in a commodity. Americans homes often retain their value when the developer designs them not so much to withstand change but to remain amenable to change. And Americans love to modify their homes. The “open floor” practice currently en vogue has resulted in hundreds of thousands of dwellings from as recently as the 1980s and 90s undergoing extensive modifications, with owners punching out the interior walls and removing doors. We love adding onto our homes as well, expanding a new bedroom, a garage, a sun room in the back, or even building a whole new floor. We might even lift the home from its foundation and move it hundreds of miles. And, when cultural shifts render a home’s location and physical composition undesirable, we all too often abandon it. That is, until the tides turn again and that part of town once again becomes hip. Then we either restore the home in keeping with its vintage character, or we start over, tearing it down and building something in its place that keeps up with the Joneses.

We’re funny that way. And that’s more or less how we’ve always been. 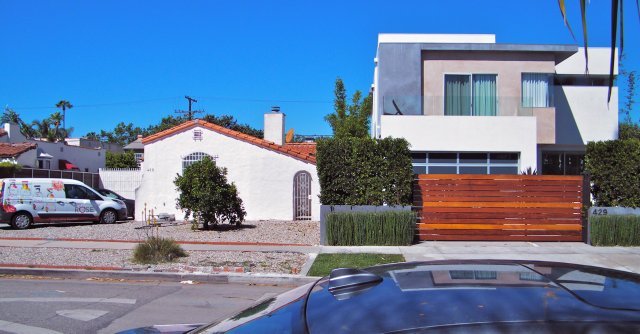 It’s amazing it took me this long to get to the essence of a teardown, but since I’ve covered the topic before, both in Chicagoland and in Brooklyn, it probably doesn’t need as much of an explanation this time around. But, now that I venture vicariously to the West Coast for a photographic exploration, it’s important to recognize that the label “teardown” has morphed semantically from its associations with blight and economic decline in the era of Urban Renewal. These days, a teardown usually takes place in a district that’s experiencing the exact opposite of blight: where land values in a previously middle-class area have risen to the point that the upper-middle and even upper classes have taken over, buying the property, then destroying the home to make way for a much larger and more opulent dwelling on the same lot. Rarely were the original homes blighted; they just didn’t align with current tastes among homebuyers with escalating purchasing power.

So they tear it down. This definition of “teardown” absolutely applies to all that has transpired in the increasingly upmarket Chicago suburb of Glenview, largely due to the high reputation of Glenview’s public school system. But a district doesn’t have to boast an International Baccalaureate program at the local high school to spur the teardown culture; apparently it can happen in a neighborhood in the heart of a Los Angeles neighborhood, if the location is right. (And if it’s the heart of a metro as expansive as LA, the location probably is right.)

The upcoming series of photos reveals a slew of recent teardowns, mostly from the Mid-City neighborhood, a large, densely populated area about two miles west of downtown Los Angeles.

In most instances, the juxtaposition of old and new is patently obvious. The neighborhood, stretching westward from Crenshaw Boulevard, with the Santa Monica Freeway as its primary southern boundary, first began to emerge as a middle-class settlement during the Great Depression (also the Golden Age of Hollywood), though many tracts remained vacant until well into the 1950s. I owe this wonderful photography to Linda Shaffer, a lifelong Angelina and property owner in Mid-City. 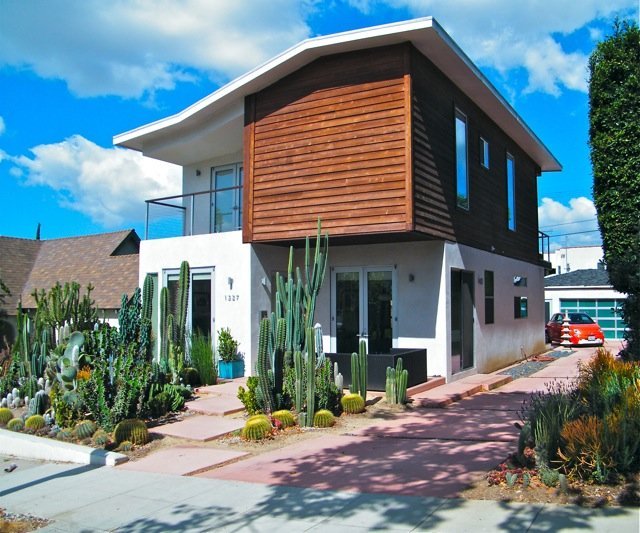 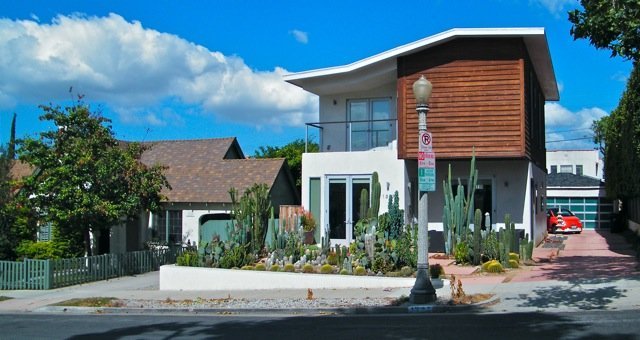 The origins of Mid-City, though, are modest—originally attracting lower-middle class whites, during the city’s most pronounced population explosion…an era when California increasingly embodied the mythologies that Hollywood so effectively promoted. For many young families seeking mild climates, a strong job market and easy homeownership, it truly was the Land of Milk and Honey. Though hardly large or elaborate, these homes often reflected a sort of modified Southwestern style on small lots of nearly equal size…a Californian equivalent to Levittown writ hundreds of times over. 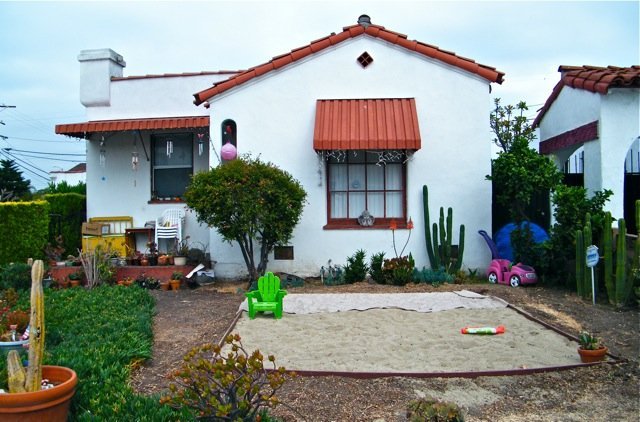 The racial make-up of Mid-City quickly changed by the 1970s, as minorities moved in. By the 1980s, the neighborhood was generally perceived as undesirable, though it evaded the dissolution of many districts to the south. As recently as 2008, the median income was in keeping with that of the city.   However, after the collapse of the housing market and its subsequent recovery, the built form began to change, with contemporary, horizontal pre-fabs replacing the diagonal gables of yesteryear. Note the contrast, not just in massing (the new homes are built almost to the minimum setback distance) but also in materials and the stylistic language. 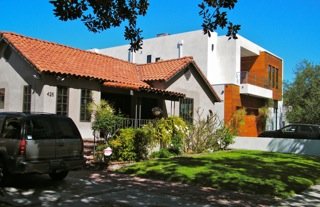 Several draw clear inspiration from the storybook homes depicted in Disney films like Snow White. Fortunately, most of these rarities enjoy enough distinction to survive the wrecking ball, though the carefully curated thatched roof on the photo below is unique; owners of most other storybook homes added conventional replacement roofing decades ago. 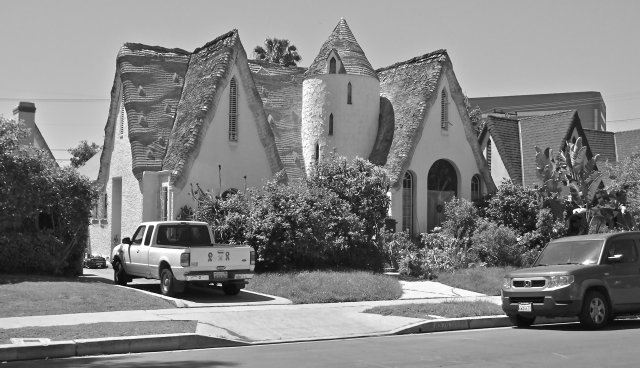 The owner of this home must sink a fortune into that roof, undoubtedly against the admonitions of the insurer, who no doubt dismisses such craftsmanship due to its propensity for burning in southern California’s arid climate. 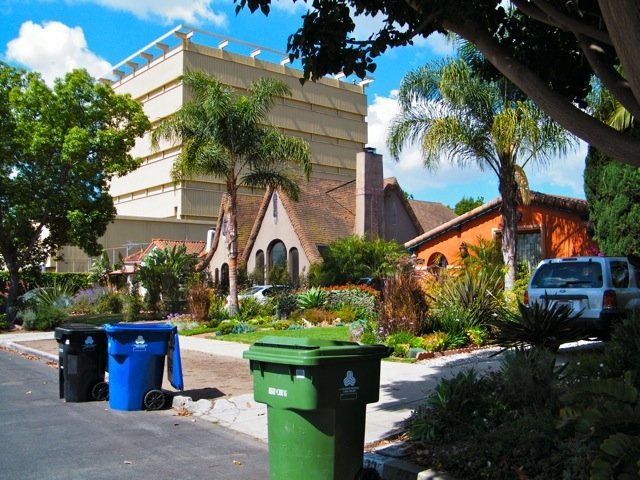 Ostensibly the monstrosity in the background is a sheathed oil well.

Rarely did the old homes fall into such disrepair that they are beyond recovery. They simply aren’t in vogue anymore. This relatively large house awaits the wrecking ball: 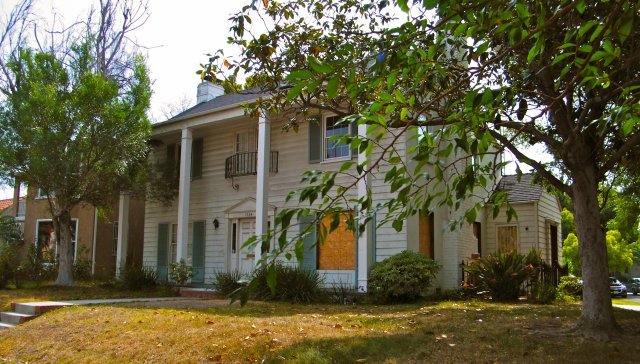 And here’s a replacement nearing completion. 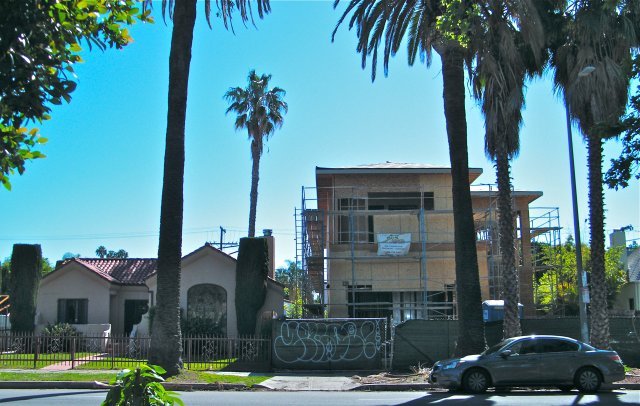 Note the graffito on the construction fencing. In a top-dollar neighborhood, the overnight emergence of such vandalism might be cause for alarm. But Mid-City has never claimed itself a district on par with Beverly Hills, even though it abuts Beverlywood, a high-income neighborhood just south of Beverly Hills. It is, fundamentally, a middle class neighborhood—one whose teardown homes command seven figures. Here’s another home about to go—a duplex: 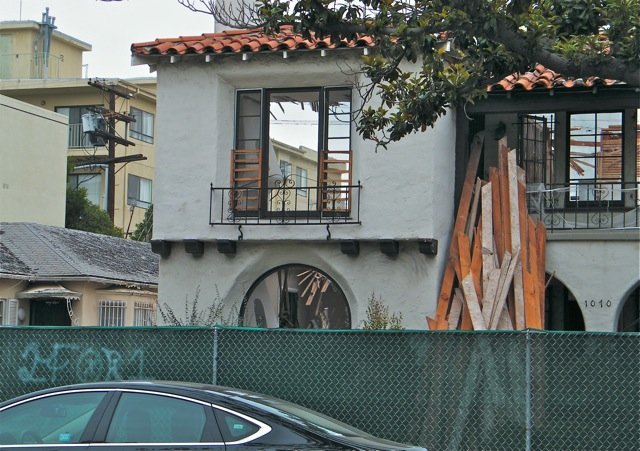 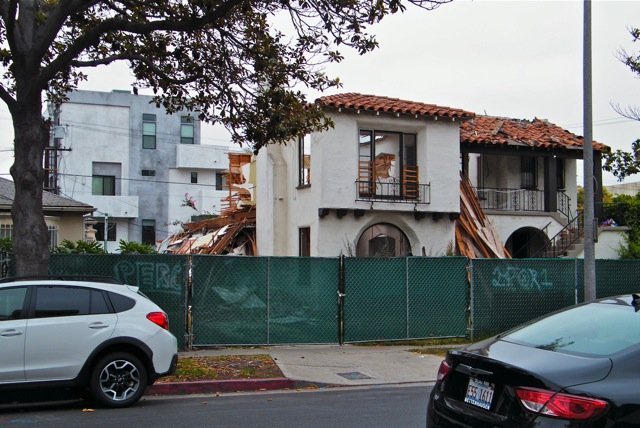 In places like Glenview, Illinois, the teardowns proliferated thanks to high demand in a formerly middle-class area with top-caliber school systems. But Mid-City belongs to Los Angeles public schools, which, despite some strong magnet programs, suffers the same ills as most urban school districts. So why would this district endure so many teardowns? 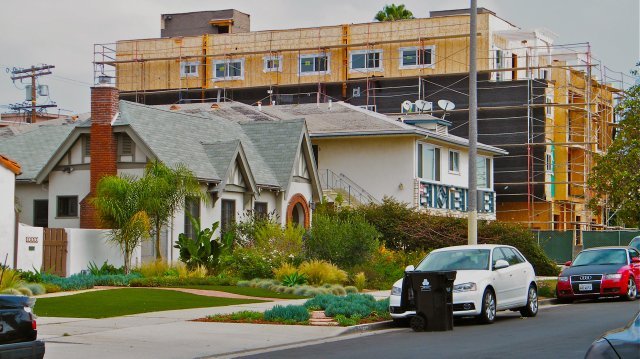 Shaffer notes two factors. First, so many school districts in southern California have declined that few enjoy the reputation of being “good”. Many of the districts in suburban Los Angeles have just as spotty of a reputation, diminishing their competitiveness to LA Public Schools. Thus, location alone is critical, and Mid-City can truthfully brand itself as “15 minutes to anywhere”. That and its adjacency to affluent areas like Beverlywood increase its attractiveness. 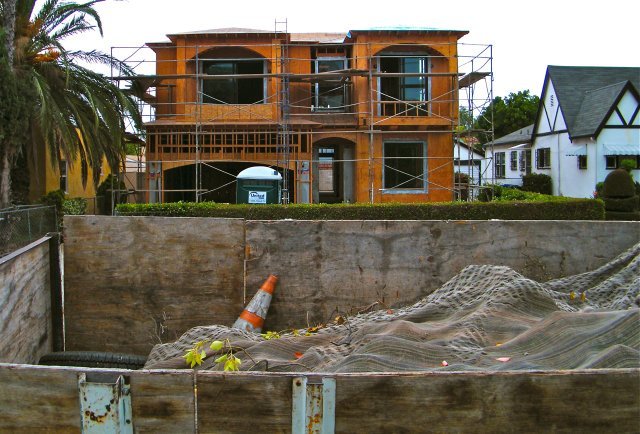 But one more factor distinguishes Mid-City from Glenview. 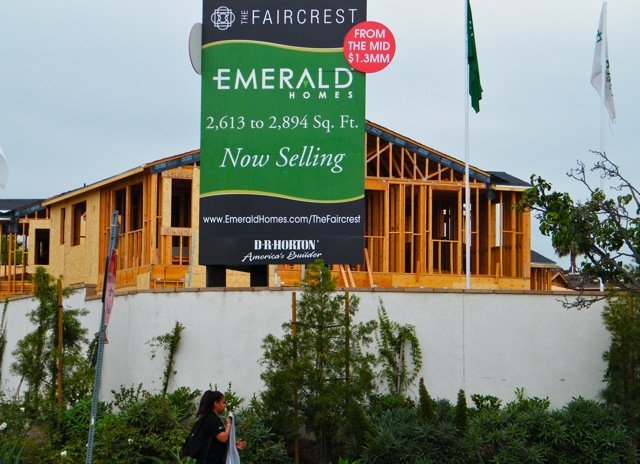 In Glenview, the usual transaction involves a wealthy homeowner purchasing the home mostly for its desirable lot. He or she then demolishes the home (usually including the foundation) and rebuilds a much larger home on site. That’s not the case in Mid-City.

Developers are finding the most vulnerable, weakest homes in the neighborhood, demolishing them, then building to maximize floor space in new speculative housing. There’s no individuation involved to these teardowns; it’s purely profit. 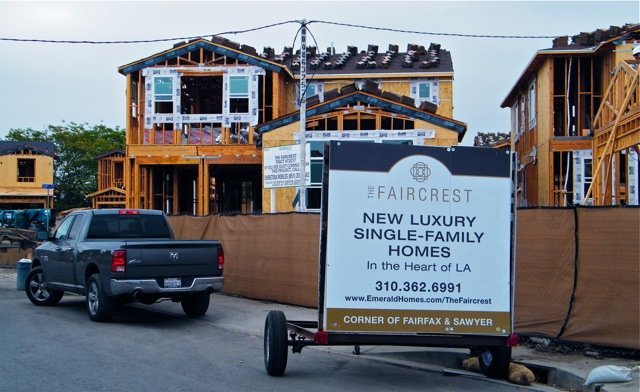 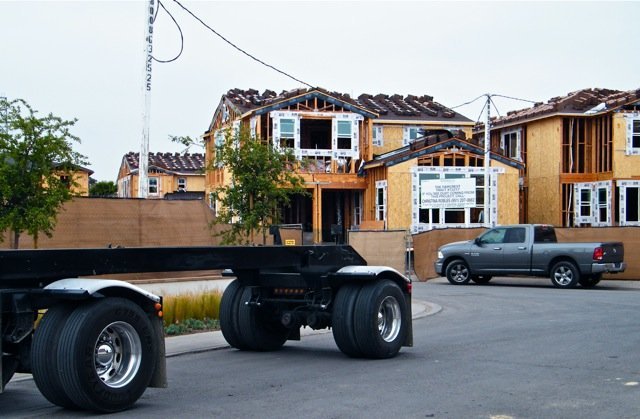 Shaffer notes local efforts to “stop the McMansionization of Los Angeles”, and she holds no fondness nor admiration for the mechanical approach to these replacement homes, which she calls a “Home Depot version of International Style”. But she also recognizes it as the inevitability of market forces at play—the same forces that are helping endowing the mostly minority homeowners of Mid-City with enviable home equity (and, inevitably, steep property taxes to boot). 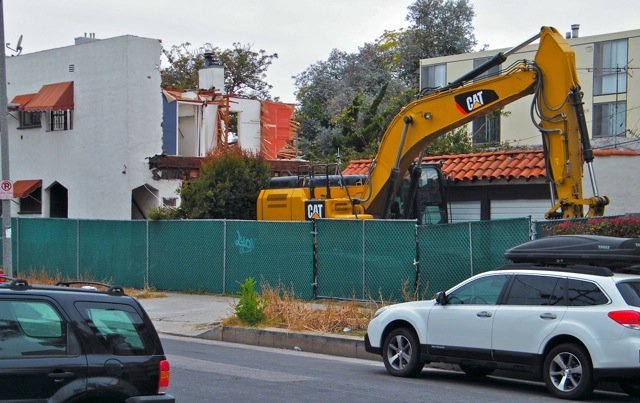 A teardown is, in many respects, the antithetical action to abandonment, even though the latter often involves demolition as well. It only reaffirms the notion that housing is an investment in a commodity, manifested through the commodification of the dwelling while the land underneath it serves as the true investment. Would this sort of thing ever take place in Europe? Not likely—historic preservation laws notwithstanding, even the cities that suffered the most devastation from wartime bombing still lack any expanses of 20th century-era housing as vast as the city of Los Angeles. Then again, they lack anything like the scope of Los Angeles…period. That’s an American thing too.

4 thoughts on “Tearing down southern California’s tribute to a bygone era (circa 1950).  ”