From offal to awe-ful: branding the Meatpacking District.

Forgive the awful triplicate pun, if you can, and step back in time for just a moment. If we were to take some fashionable New Yorkers from 1986, shove them into a DeLorean, then shuttle them to the present, can anyone imagine the shock on their faces if this were the first thing they saw once they climbed outside? 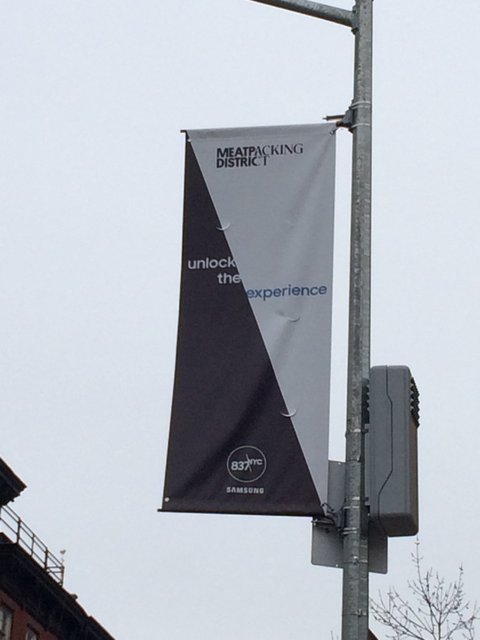 “Unlock the experience,” it says on a flag attached to a streetlight. And, at the top of the flag, the neighborhood listed as the “Meatpacking District”.

So is this banner hinting at a certain experience, in a district that is so customarily associated with meatpacking that it serves as the district’s name? What sort of experience can one expect to encounter in a meatpacking district, besides certain foul-smelling evocations of Upton Sinclair’s The Jungle? How different is meatpacking in New York from Sinclair’s Chicago?

Quite a bit, apparently. And just about every New Yorker knows it—as would anyone else who has visited this tiny Manhattan neighborhood south of Chelsea, overlooking the Hudson River. Only the unfamiliar would cling to images of discarded boxes, glistening with moist viscera, flies teeming around neglected residual carrion. Such a notion is as extravagant as the imagery I used to create it. Replace the buzz of insects and rotting meat with the hum of commerce and Patek Philippe. That is the reality of the Meatpacking District today. So flags/banners that tout the “experience” of this district are completely in sync with the mystique it hopes to elicit. And they’re everywhere. 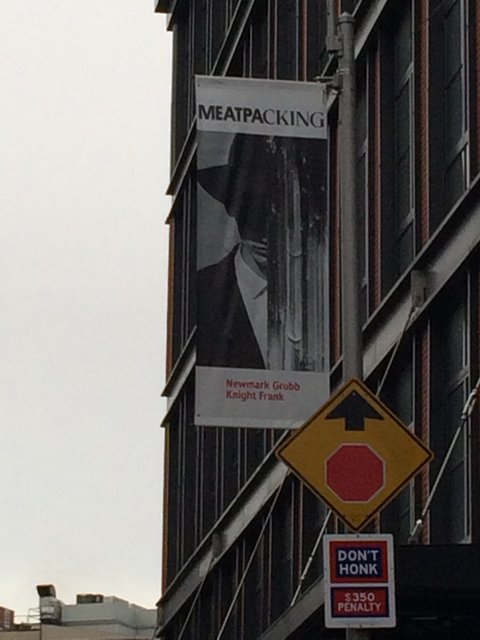 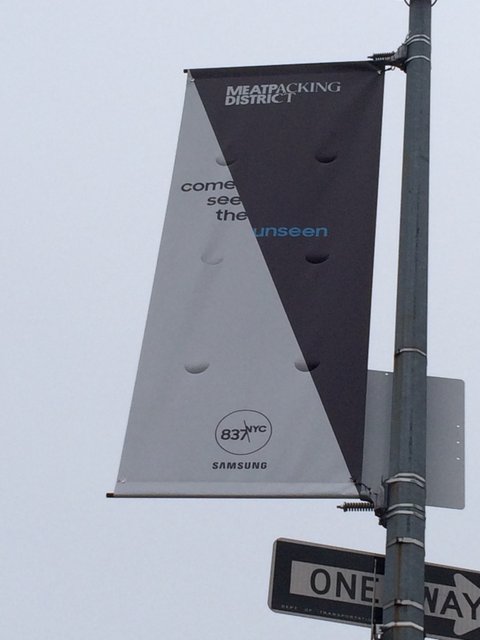 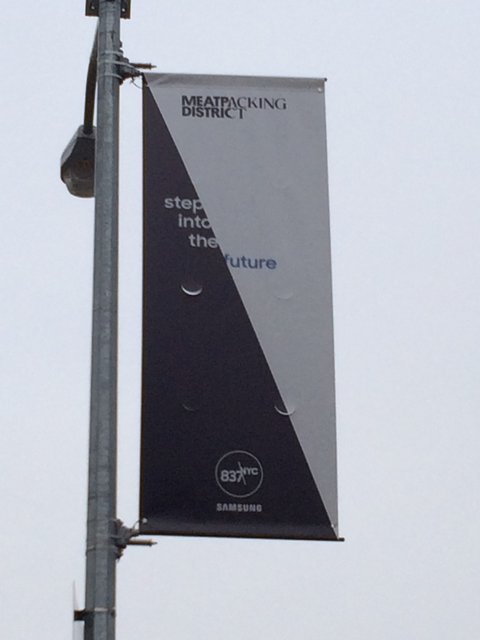 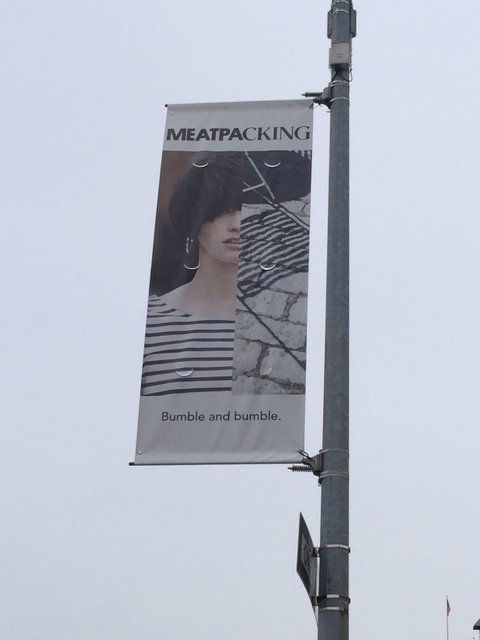 But it wasn’t always like this. As recently as the 1950s, this “neighborhood” (if you could even call it that) was a fully operating hub for slaughterhouses and packing plants, while hosting a variety of other manufacturing-related businesses. Delve back further and it was the site of Fort Gansevoort, which came down in the middle of the 19th century to make way for the freight yards of the Hudson River Railroad. As a logistical center, it quite understandably failed to command the high residential real estate prices that one might find in Greenwich Village to the immediate south, instead encouraging the aggregation of nuisance-type uses: distilleries, fuel refineries, and, by the turn of the 20th century, a lively market for the trade of meat, poultry and dairy.

In the 1960s, the containerization of freight as the new logistical standard inevitably required much larger acreage for consolidating and then distributing produce to a rapidly dispersing suburban population. Thus, the cheaper land near Newark and Jersey City (the Port Newark-Elizabeth Marine Terminal) supplanted the Meatpacking District for key operations. Over 90% of the 200+ meatpacking plants moved out of the District, and the area, never high-rent, became the epicenter of Manhattan’s seediest underground nightclub, BDSM and prostitution scene. These alternative businesses characterized the neighborhood until the late 1990s, when it rapidly evolved into the center for emergent, high-end fashion. By the early 2000s, even as the miasma of semi-processed meat still lingered on the streets from the few remaining vendors, the Meatpacking District had turned to the city’s most fashionable neighborhood, featuring clubs, restaurants and boutiques characteristically (and predictably) labeled as “edgy”—and residences that commanded steadily climbing rental rates. 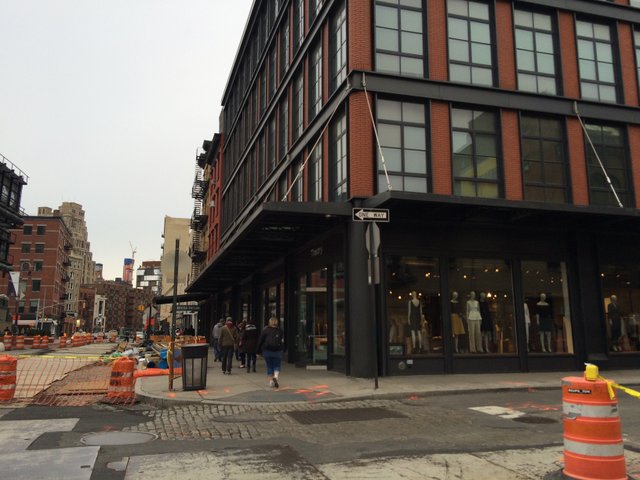 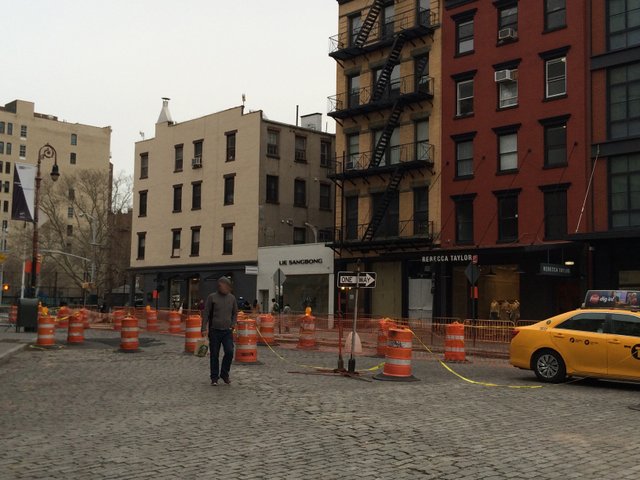 In short, The Meatpacking District now wears the mantle previously claimed by West Village, SoHo, Chelsea, and other neighborhoods that birthed a new phoenix from the ashes of their own desuetude. For the time being, it may be the hippest eight blocks in the Borough of Manhattan, though inevitably it will eventually relinquish its crown and scepter. Until it does, the neighborhood’s Business Improvement District (BID) helps foster a spirit of boosterism that the more cynical would no doubt argue the neighborhood doesn’t need; it already is the hot ticket. If anything, the BID embodies an Icarus-like ambition to promulgate the neighborhood’s jurisdiction into territory that never once had anything do due with the wholesale processing and trade of meat. How do we know this? Just take a look at what Google Maps considers the neighborhood boundaries, outlined in red: 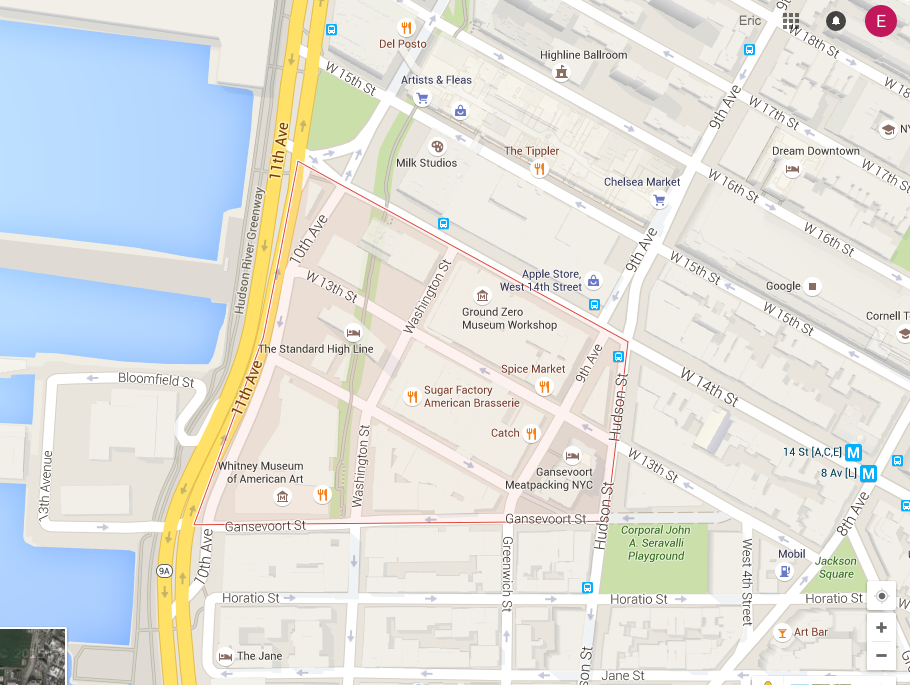 Pretty tiny. Now compare that to the turf that the Meatpacking District BID claims. 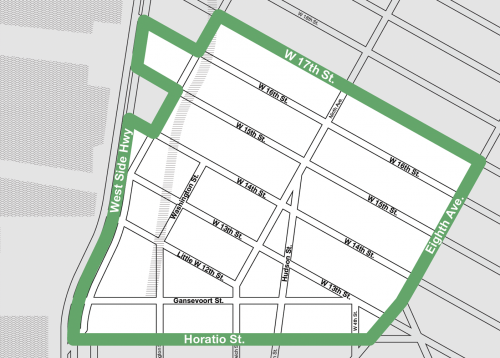 More than twice the size. And the proof is in the pudding: travel the streets of the periphery of The Meatpacking District, and you’ll still see those flags fixed to various streetlights. Like this one: 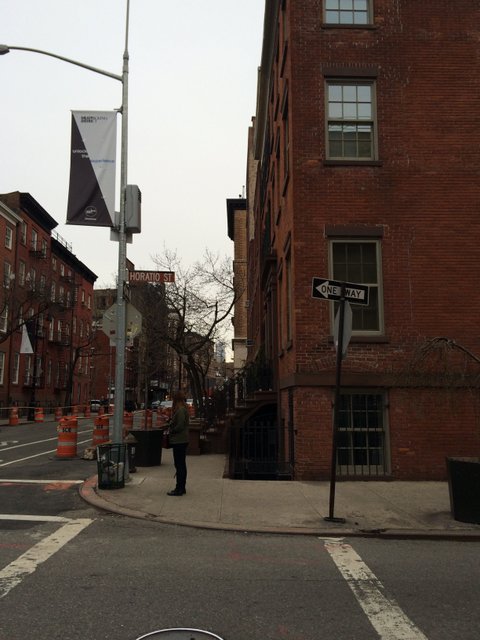 The building stock certainly doesn’t suggest The Meatpacking District, and, at least until recently, most people who live at Horatio and Greenwich Street would have identified their low-slung townhomes as a part of West Village. But this Fall 2014 Google Street View of a different corner at the same intersection indicates that The Meatpacking District’s efforts to expand at the fringe are ongoing. And it’s not just taking place at the border with the West Village. To the north, where the District abuts the Chelsea neighborhood, the same branding efforts appear through flags and banners on streetlights. 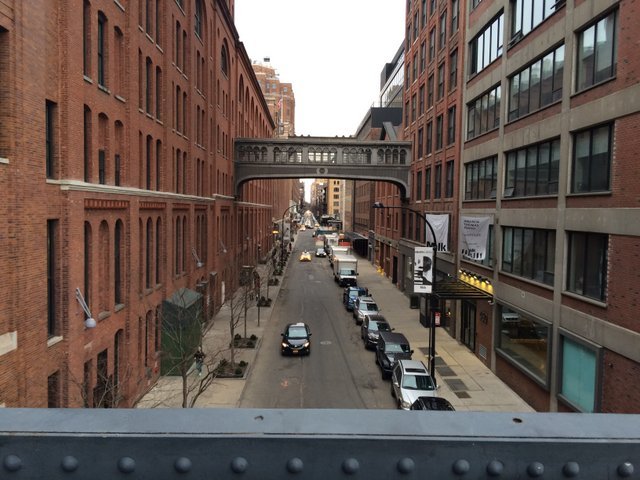 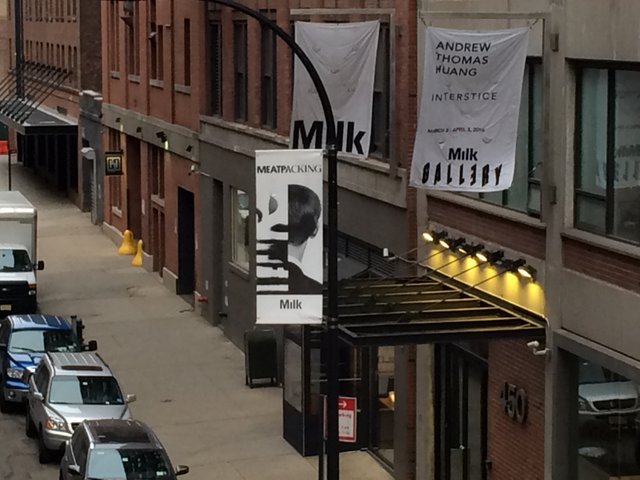 They’re everywhere. With the momentum The Meatpacking District has been enjoying for the last two decades, does it really need the additional branding? After all, the tiny neighborhood also boasts the recent relocation of the Whitney Museum of American Art… 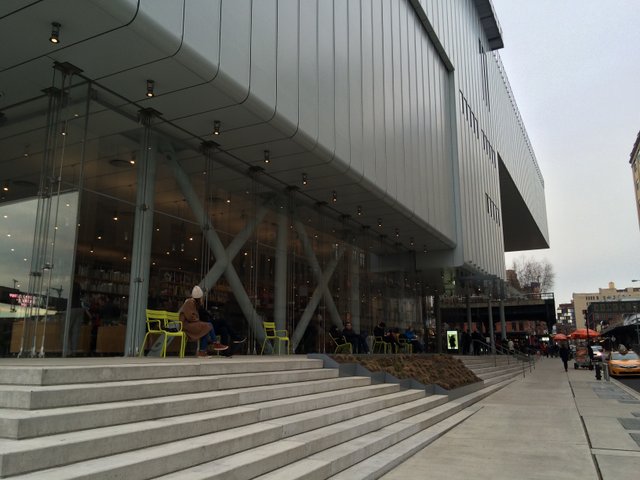 …as well as the southern terminus of the High Line Park, just a stone’s throw from the Whitney. 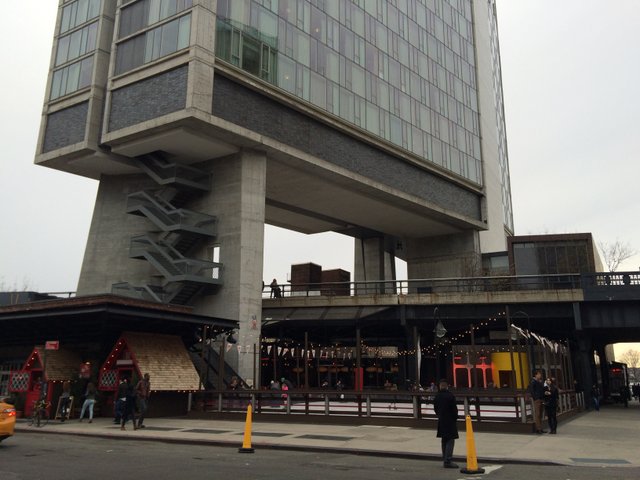 And, crammed into the remaining space where Gansevoort Street meets the riverfront, a few telltale indicators of the neighborhood’s carnivorous heritage survive: 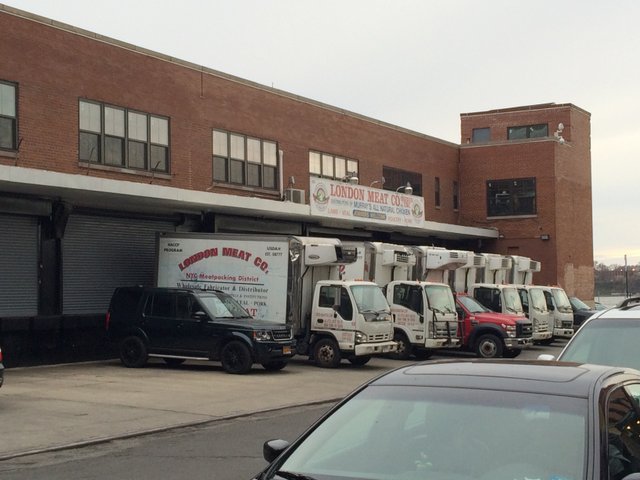 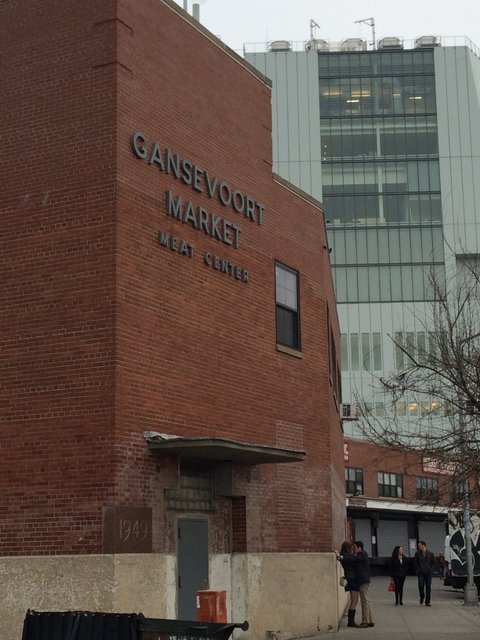 Elsewhere in the District, the signage clearly intends to evoke the wholesale trade that gave the district its name, though the authenticity of these references is dubious: 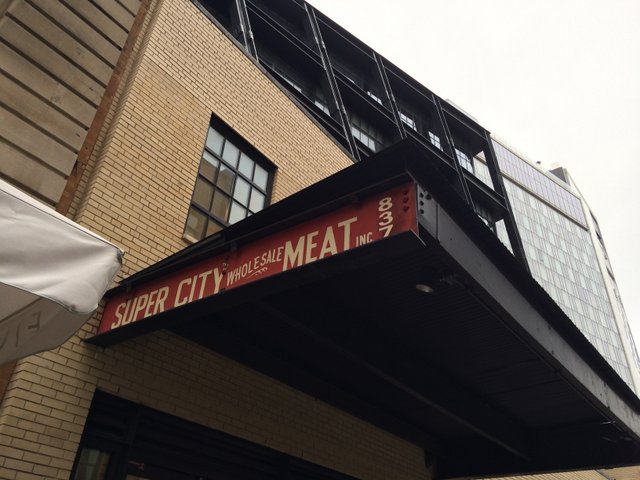 The transformation of one of Manhattan’s most unpleasant neighborhoods into its most chic is only surprising to those who are unattuned to the interplay between shifting collective tastes and real estate. Like Soho and many others before it, The Meatpacking District had to sink to unprecedented depths to give it a wide enough berth to rise. It had long served as the “backstage” commercial locus wedged between two mostly residential neighborhoods of West Village and Chelsea (and, despite efforts to expand the mystique of the ‘hood, the District’s origins and its oblique grid remain wedge-shaped). For close to a century, it was essentially the crotch of Manhattan, harboring locally unwanted land uses like noisome meat processing, and, eventually, a facility for the Department of Sanitation and a parking lot for garbage trucks. They’re still close by. 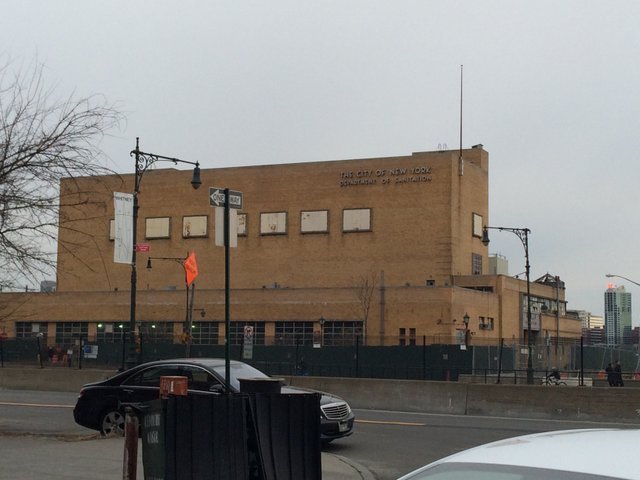 In spite of it all, when housing commanded such astronomical prices across most of Lower and Midtown Manhattan, this smelly little triangle became the one place cheap enough that artists and designers could take risks, pushing fashion, studio art, and the purveying of goods to new limits that would be impossible in SoHo because the rent is too dang high. Needless to say, the District’s reputation for iconoclasm has outlasted its affordability. It’s no cheaper than Chelsea or West Village anymore—in fact, it’s probably pricier—but the charm fostered by a tiny neighborhood’s rise from underground bondage clubs to gourmet children’s food survives…or, at least, that’s the myth all those flags and banners hope to perpetuate.

In 1985, people would have laughed at the notion that The Meatpacking District would ever be an attractive neighborhood, let alone that it would be anything other than the number one stop for the vice squad. But much of Manhattan shared pessimism about the city’s future at that time, and SoHo was just beginning to assert itself as the destination for the city’s impecunious artists. In fact, relatively few neighborhoods in Manhattan have the same character and reputation that they did 30 years ago, which in turn begs the question what a reputation even means in these heady times. Perhaps we have to assess the etymology of the word “reputation”, particularly the Latin putare that forms the basis of the second syllable, then ponder on another clear derivation: “putative”. 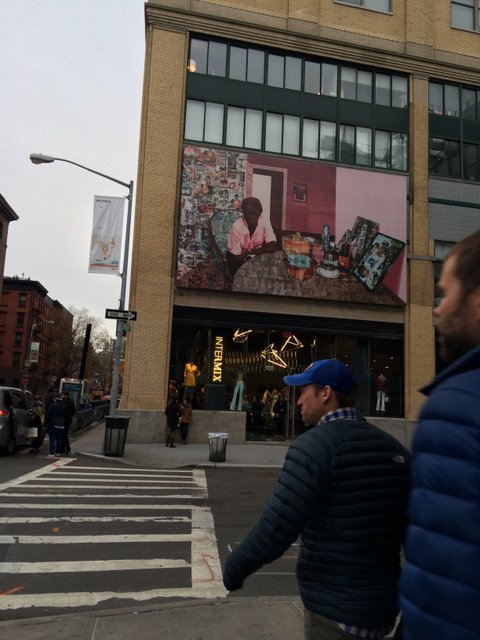 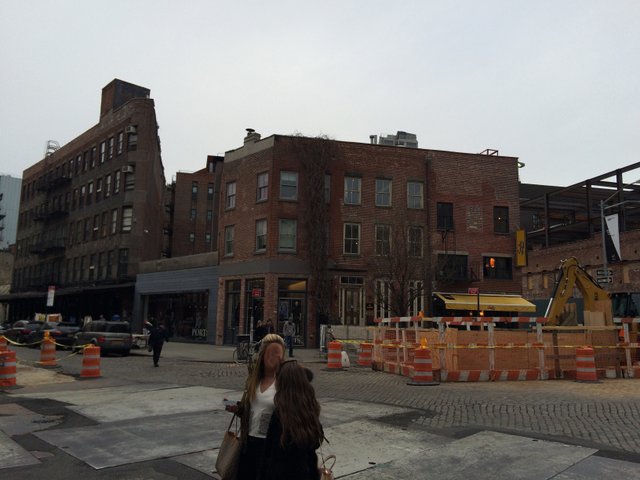 The Meatpacking District is the putative center of haute couture in Manhattan at the moment (or at least its Babbitts assert it to be), but I’m probably showing my own naïveté in making this claim. No doubt, among certain circles of people far more attractive than me, the neighborhood is already passé. And in another 30 years, who knows where it will be—or Soho, Harlem, Greenpoint (Brooklyn) for that matter? After all, Hoboken, New Jersey hasn’t been “cool” for at least a decade. I could attempt a blog article of what I think the successor to the Meatpacking District might be, but it’s up to the bohemian community to christen it in an ostensibly organic way—and then for the real estate speculators to capitalize. Then we’ll hoist those flags onto the street poles: “Paramus, New Jersey: Experience and Indulge.”

PrevKmart: Blue light specials have left them in the red.
Boundary battles over sparklers and smokes?Next

One thought on “From offal to awe-ful: branding the Meatpacking District.”