Boundary battles over sparklers and smokes?

We always look for the better deal first. It goes without saying. When two neighboring jurisdictions apply different regulations to a specific good or service for which great demand exists, the industry that financially depends on that good/service will gravitate toward the less stringent side of the boundary line. I’ve pointed this out before when it comes to cigarette taxes in New Jersey versus Pennsylvania or just about anything in the libertarian oasis of New Hampshire, where low taxes and restriction on certain products that the neighboring states regulate heavily means a lot of storefronts right at the state line that sell those products. It’s common sense. Why should a tobacco vendor devote unnecessary time, energy, and transaction costs, when a less onerous climate sits just a few miles away, across that border?

It’s even easier to see how this plays out when multiple political boundaries converge—or nearly do. The tiny town of Hancock, Maryland may not seem like much, but it carries with it a geographic distinction of occupying narrowest part of The Old Line State—and, I suspect, the thinnest portion of anywhere in the lower 48 states. 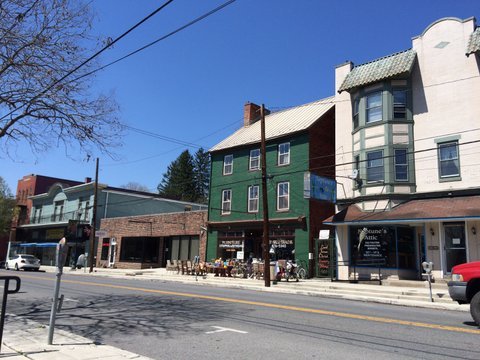 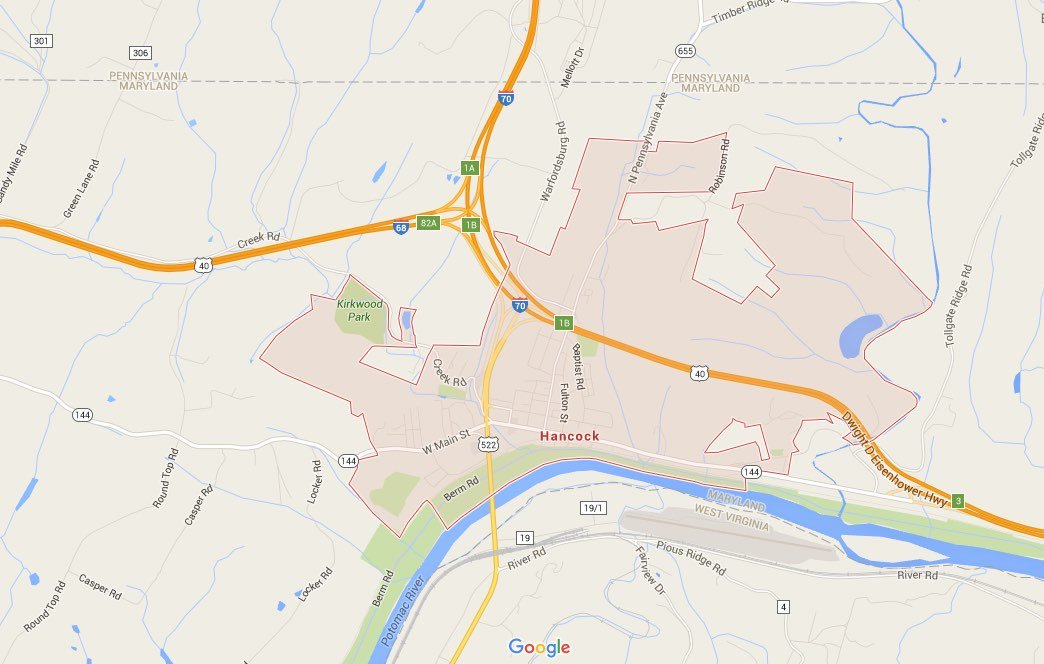 As the Google Map reveals, there’s very little of Maryland separating Pennsylvania from West Virginia—just about 1.5 miles from a longitudinal axis. The majority of Maryland’s northern boundary is what ultimately served as the Mason-Dixon Line; its southern boundary is in large part the Potomac River. Straightforward as this may seem compared to some state boundaries, the decision has created Maryland’s particularly unusual shape, including the situation at Hancock, where you can walk the breadth of Maryland in about twenty minutes. You could practically launch a lump of a coal and expect it to pass through three different state constitutions. But chances are great that a statutory analysis isn’t necessary to pick up on these key differences on one side of the boundary from the other. Just use the eyes.

Heading north on Warfordsburg Road outside of Hancock, a driver will, in a matter of moments, cross from Maryland to the Pennsylvania line. 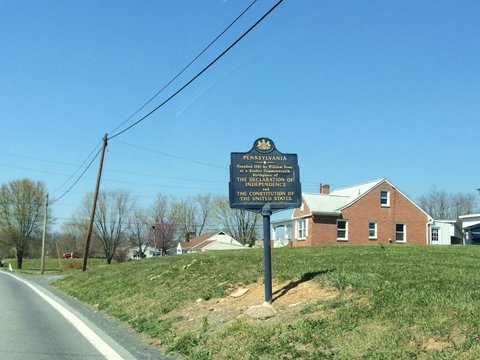 Just a few hundred feet further, immediately after the Interstate 70 overpass, this is the first thing that’s visible on the right: 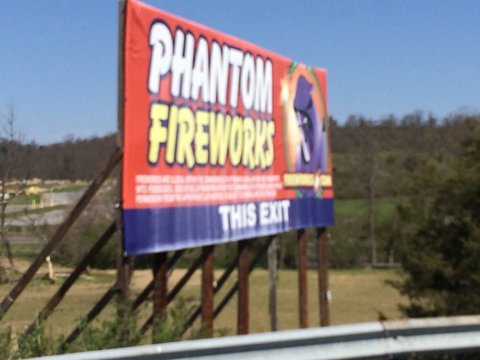 It wasn’t easy or safe for me to take this picture from any vantage point, so forgive the photo quality, but it’s abundantly clear what we’re seeing: a billboard intending to appeal to motorists on the far more heavily traveled I-70, just north of the boundary line. Why is this significant? Because it wouldn’t have happened in Maryland: the state’s outdoor advertising laws are some of the most stringent in the nation, requiring extensive and costly permits and completely restricting off-premise outdoor advertising along interstates or other expressways. Conversely, Pennsylvania allows them in most circumstances, and the average drive along interstates in PA is filled with billboards or other forms of outdoor advertising. But it’s not just the nature of allowing billboards that distinguishes the two states. It’s the content: Phantom Fireworks.

Regulation of fireworks varies greatly by state, with some allowing just about anything, while others—particularly the arid, wildfire-prone states in the West—restrict consumers from purchasing anything more than fountains or sparklers, but none of the aerial, rocket-based novelties. (Incidentally, the three states with the strictest laws, where even sparklers are forbidden, are all on the East Coast: Delaware, New Jersey, and Massachusetts.) Maryland and Pennsylvania share a similar regulatory landscape on fireworks in terms of what’s allowed, but with one key difference: Pennsylvania permits the sale of “out-of-state” fireworks, meaning that certain aerial novelties are available at Pennsylvania stores but must remain dormant until the purchaser crosses back into a state where they are legal (such as Ohio). How does a fireworks vendor ensure that a person will legally use them out-of-state? In Pennsylvania’s case, it restricts state residents to certain sections of the store, while allowing those with an out-of-state license (particularly a state with lax fireworks regulations) to meander a whole different set of aisles. Regardless, Maryland lacks a provision allowing the sale of out-of-state fireworks, so it is understandably more lucrative to run a business on the Pennsylvania side. Thus, it is easy to find ads for Phantom Fireworks when entering Pennsylvania from Maryland, New Jersey, New York, or any other state with stricter laws. And the biggest, baddest fireworks stores nearly always sit close to state lines.

Meanwhile, going the other direction, the Maryland/West Virginia border provides another lesson in regulatory differences. To be frank, there’s not much to offer south of the Potomac from the town of Hancock. That stretch of U.S. Highway 522 is rural and largely uninhabited on the West Virginia side. But travel further toward Cumberland, western Maryland’s largest city, and it’s a different story. This part of Maryland isn’t quite so narrow—close to six miles between the Mason-Dixon and the Potomac—but immediately south of the river at Cumberland, one crosses the bridge into the town of Ridgeley, WV. 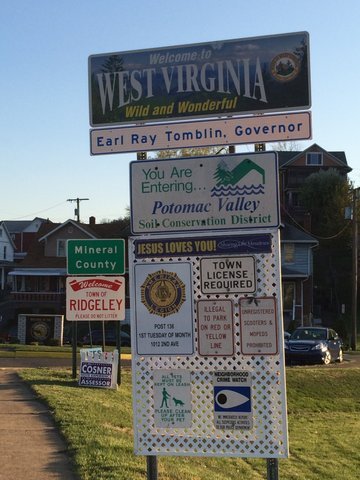 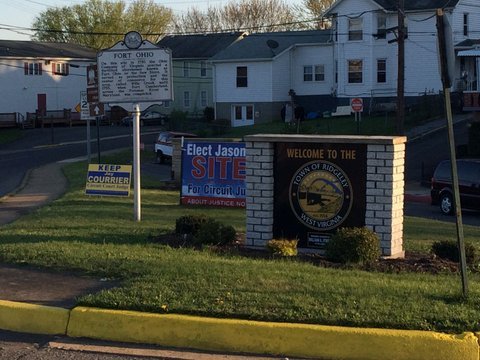 And, shortly after crossing into town, here’s the first storefront you’ll encounter: 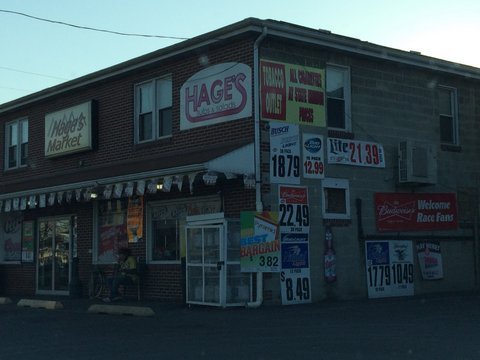 Discount tobacco. And just a few blocks down the road? 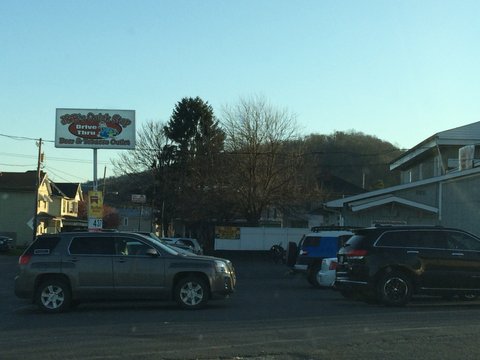 Then a bit further? 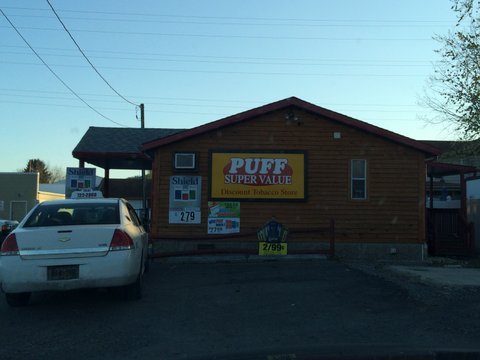 They’re everywhere. As was the case in Morrisville, PA, which took advantage of the huge difference in cigarette taxes between Pennsylvania in New Jersey, proprietors here have capitalized on West Virginia’s low taxes in comparison to Maryland. West Virginia’s excise tax is 55 cents, while Maryland’s is $2.00. Needless to say, folks in Cumberland have easy access to cheap smokes; they can just cross the river. 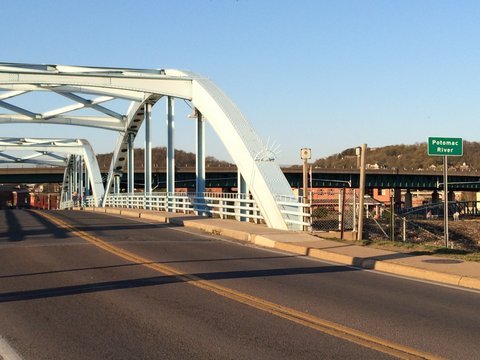 Since Cumberland is a much larger city than Ridgeley, it’s likely these tobacco outlets in West Virginia are making a killing. And, for those with a phobia of bridges, they just need to travel five miles north to the Pennsylvania line, where they can still save money; the excise tax in PA is $1.60.

Jurisdiction-sensitive vendors are easy to find throughout the country. States with little to no sales tax often boast huge malls just inches from the boundary line, particularly if a major metro is close by in the neighboring, high-tax state. New Hampshire’s landscape of shopping capitalizes on its allure to Bostonians seeking a good deal, while Delaware’s titan Christiana Mall attracts shoppers from New Jersey, Pennsylvania and Maryland. And, as the evidence here shows, even in sparsely populated areas (as is much of Appalachia), the unusual co-mingling of different state territories results in some interesting horse-trading.  Writ large, it demonstrates how states can effectively harness economic development at the expense of their neighbors, by carefully organizing their tax and regulatory structures around an industry.  It isn’t brain surgery; it’s strategy.

6 thoughts on “Boundary battles over sparklers and smokes?”