Kmart: Blue light specials have left them in the red.

It’s happening again! Sears Holding Corporation (SHLD) has announced yet another wave of closures for its two flagship brands, Kmart and Sears.  This time it looks like ten Sears stores will be closing, including one in the Southland Mall in Houma, Louisiana—a mall that was already struggling when I blogged about it in 2012. I’d speculate that Sears’s departure may sound the death knell for that mall—except that the Sears wing of the mall was already in the worst shape, as is a common occurrence in malls across the country. Sears has been such a DOA brand for so long that even the other mall tenants seem to avoid them.

The Sears wing is often an Achilles heel, even in otherwise successful malls. But, dismal as it may seem, Sears actually may be the stronger of the two brands. Kmart is closing a whopping 68 stores in the months ahead. According to the press release, the Kmart stores will begin liquidating their assets on May 12.

But are they sure about that? This one in Quakertown, Pennsylvania seems to be getting a head start. 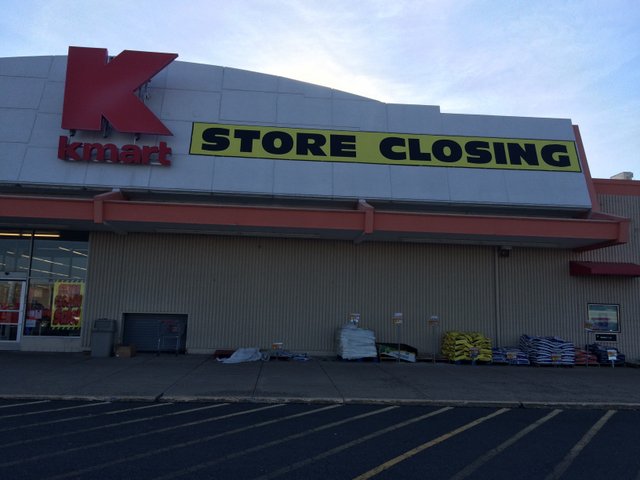 Incidentally, it doesn’t seem to be on the closure list, suggesting that SHLD is closing other underperforming units incrementally and with no real fanfare. Since this branch is getting a head start on the process, it doesn’t hurt to poke around for any other telltale signs of the brand’s demise. All you have to do is pivot to the right. 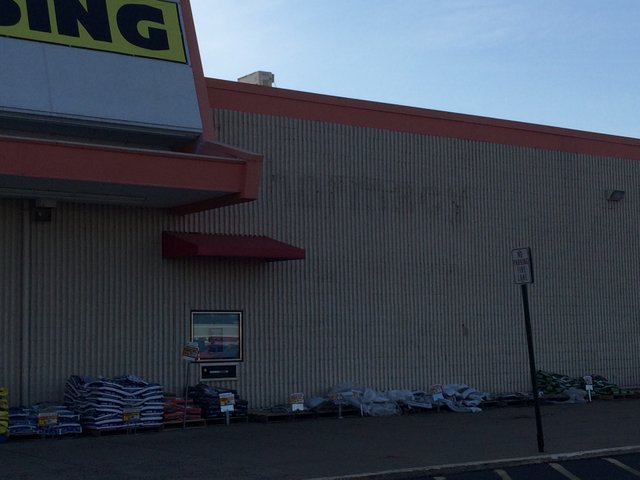 Can you see it? Just a bit to the right of the red overhang is a label scar with the word “Pharmacy”, suggesting that this location had dismantled its pharmacy operations long before the store itself liquidated. And a quick online search easily verifies that, yes, Kmart sold much of its prescription inventory to Walgreens at various stores a few years ago, though, yet again, Quakertown failed to make this list. Perhaps it closed even farther back.

At any rate, one might expect that the profit margin in prescription drugs would be strong enough that it could prevail as one of the strongest departments. Then again, pharmacists themselves boast a skill set that no doubt commands much higher wages than the average Kmart employee. And, unlike Walgreens, Kmarts universally lack drive-through pharmacy services, so the only reason people are likely to take their prescription to a Kmart is if they can browse the aisles while they’re waiting for the pharmacists to fill it. The closure of a pharmacy suggests that Kmart can’t even convince people to shop passively. After all, if that’s want they want to do, why not go to Walmart?

And there’s the rub, at least for this location in Quakertown. All you have to do is look across to what the other side of PA State Route 309 has to offer. 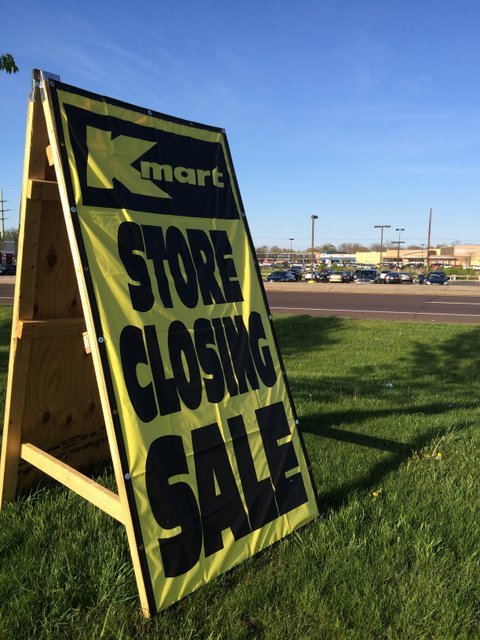 See it in the distance, to the far right? Maybe this zoom-in will help. 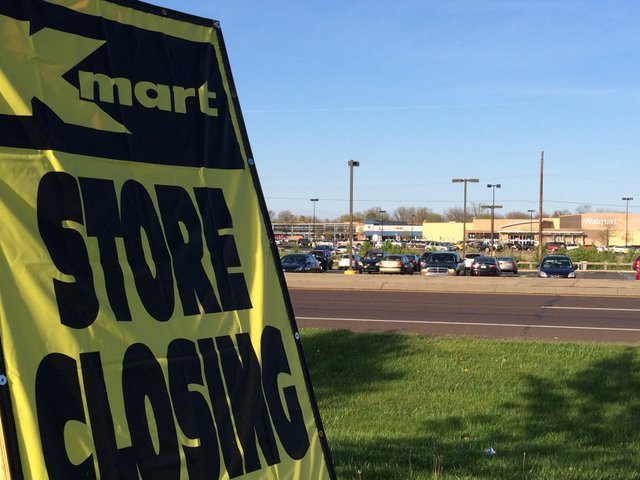 There it is: Kmart’s fiercest competitor for almost three decades, though for two of them, Kmart hasn’t even put up much of a fight. And, despite the fact that Walmart announced a sizable spate of closures earlier this year, no one is placing any money in Kmart—or any other discount retailer, for that matter—coming in to fill Walmart’s void. As I blogged about awhile ago, for the last decade or two, Kmart has generally only prevailed in submarkets where a Walmart is nowhere to be seen. In fact, those rare but yawning gaps in Walmart’s catchment area are generally about the only places where a Kmart’s parking lot will be moderately full. So it’s that much more astonishing that this Quakertown Kmart has managed to succeed for so long while Walmart was directly across the highway. Or maybe it never truly succeeded and simply limped along unprofitably for years. At the very least, this Quakertown Kmart benefited from its close proximity to other, more successful retailers. Here are its neighbors in the same strip mall: 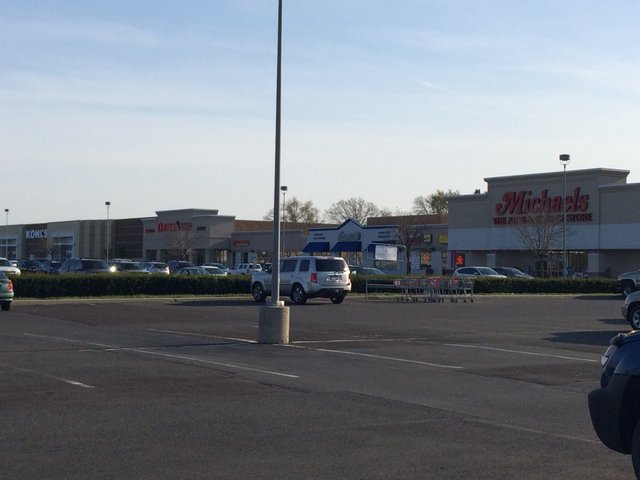 Alas, neither Kohl’s nor Michael’s, nor successful restaurant outparcels such as Five Guys and Starbucks, could keep this Kmart afloat; the Walmart immediately to the east saturated the market.

Regardless of the conditions that have brought upon the Quakertown Kmart’s demise, in a matter of weeks, the storefront’s appearance will resemble so many other shuttered big boxes, like this one in Randolph, New Jersey, an outer and largely affluent suburb of New York City: 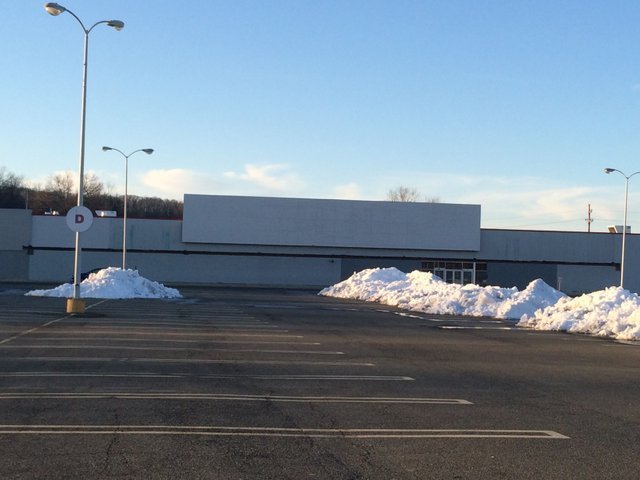 Sure, it’s a Kmart that must have closed a few years prior, but, at first blush, you’d never know. You’d never be able to tell at second blush either. Only a complete zoom-in reveals its roots: 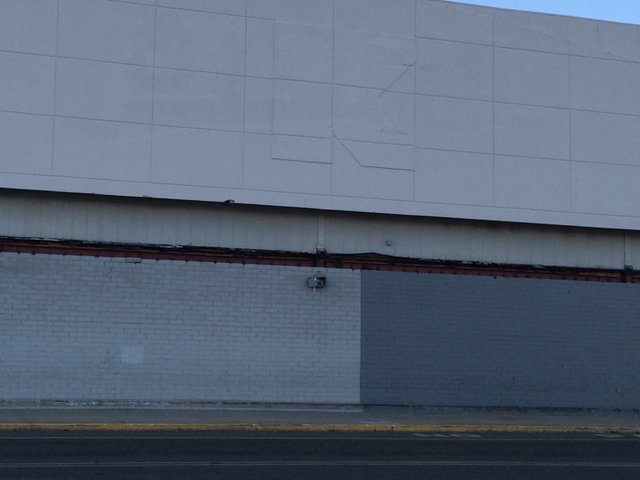 You can see the faintest outline of a K in relief to the surrounding tiles. And then, in front of the long-shuttered entrance (with interior lights still on), an abandoned shopping cart: 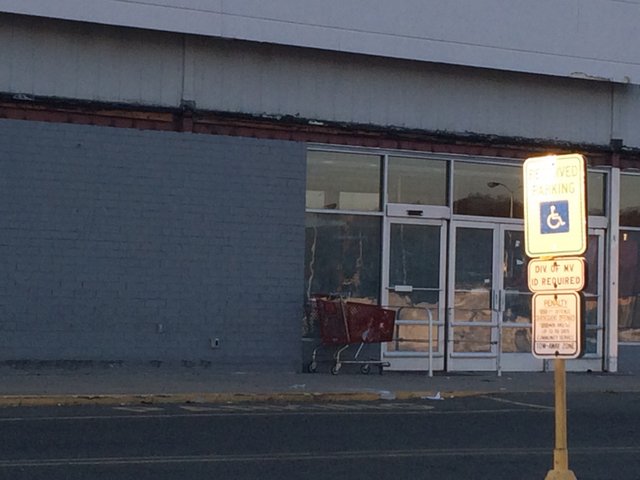 But the anonymity of this vacant branch only highlights another weakness in the struggling brand. It has a completely different look from the one in Quakertown. Sure, both locations clearly hosted the big red K, but the remainder of the building offers no clues through color, shape or pattern. Compare this to old Walmarts from the early 1990s, whose unmistakable blue-and-gray exteriors contrasted sharply with the more contemporary Walmart color combo of tan, yellow and white. Or compare Kmart to its other big competitor, Target, whose exteriors clearly share similar aesthetic flourishes. For that matter, even smaller national brands, like Pizza Hut or Taco Bell, still put obvious effort into imbuing their architecture with signifiers of the brand. Remove the “Pizza Hut” sign from a freestanding location, and you can always tell it was once a Pizza Hut. Kmart has nothing to offer beyond its big red K. 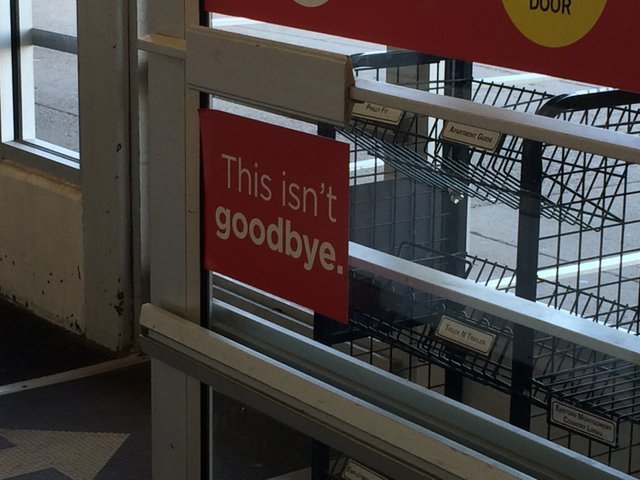 While the exit door at the Quakertown branch might promise of a return visit, it’s not going to happen. Kmart now has fewer than 1,000 locations left in the US. It’s no longer a staple of consumer culture under any metric, and, since its shuttered locations are so nondescript, there’s little evidence remaining of where Kmart once stood and prospered. While this may at least redeem the brand by drawing less attention to its abandonment—a sharp contrast from the obvious vacancy of old Walmarts, when the company upgraded to the Supercenter concept and left hundreds of blue-and-gray prototypes to languish—it also makes it harder for Kmart to assert itself through vintage visual cues, if it should ever regain some footing. But at this point, nobody’s expecting a renaissance with Sears or Kmart. Even more bleak: with each passing day and newly shuttered store, fewer people even care.

6 thoughts on “Kmart: Blue light specials have left them in the red.”