Immigrant investment has breathed life into long-declining urban neighborhoods; why shouldn’t the same happen with suburban ones? Fifty years ago, the prevailing wisdom was that foreign-born populations tended to cluster most heavily in the central cities of major metropolitan areas. At the turn of the 19th century, it often consisted of newly arrived Western Europeans: Italians, Germans, Swedes. Densely packed urban environments were not only easier to maintain good cultural networks with peers who spoke the native tongue, they often had the most affordable housing. These days, the immigrants could come from anywhere across the globe, but they’re just as likely as the native-born to associate suburbia with the American dream, to the extent that some select suburbs are more than 50% immigrants—a higher percentage than most of the primary cities in the country’s historic metropolitan areas.

A perfect example of this is Edison Township, New Jersey, usually just referred to as “Edison”. Thirty miles southwest of Manhattan, the large community is entrenched in metropolitan New York City. And, in the last twenty-five years or so, it has morphed into a prominent satellite for immigrants primarily from India or China, with its own Chinese-oriented commercial district. Except that this Chinatown looks nothing like the packed together former tenements of the Lower East Side, with storefronts presiding over busy sidewalks. Not in the least. While much of Edison is older (1950s-era) and still reasonably scaled to pedestrians, the most vibrant shopping hubs appear a lot more like this: 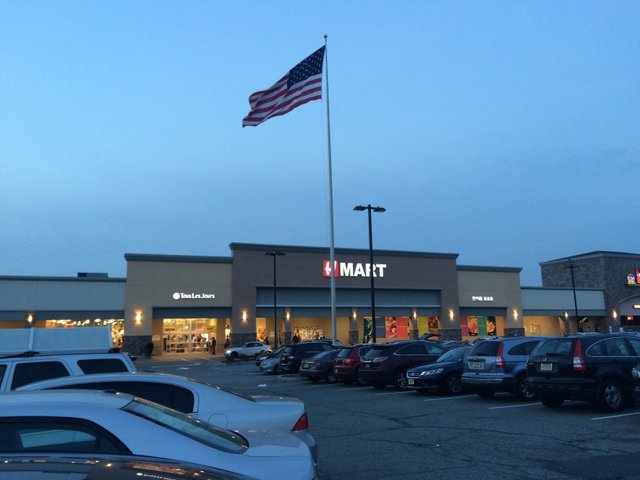 Strip malls with a huge parking lots out front. The prominent one in the photo below hosts the Korea-based HMart as its anchor tenant, but many of the other services seem to accommodate immigrants—particularly those whose ties to the home country remain powerful. 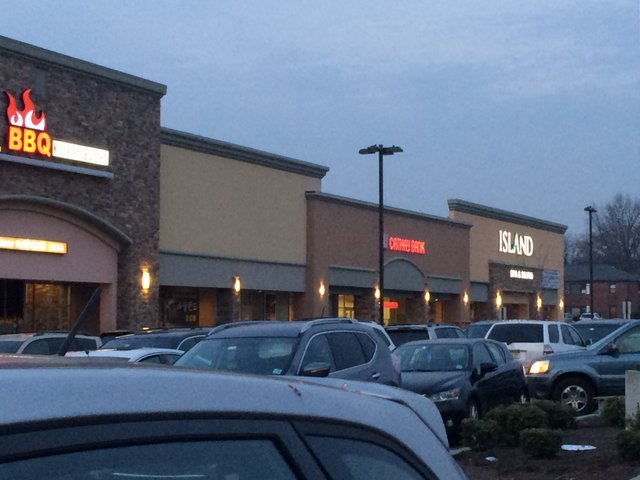 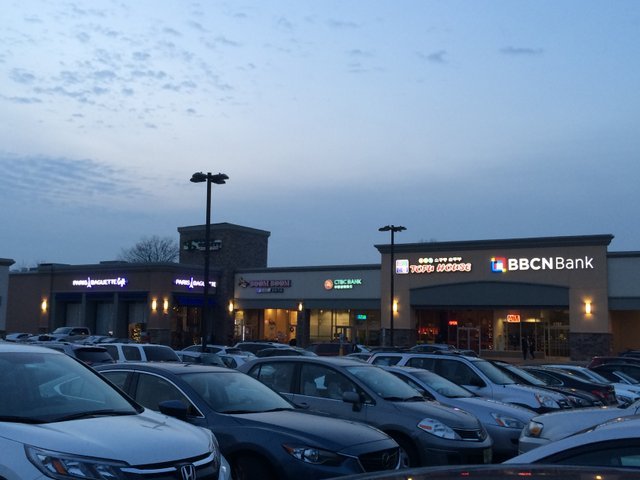 It’s not so easy to tell in these twilight photos, but the signage generally says it all: Cathay Bank from Chinatown Los Angeles. Island Spa and Salon. BBCN, the largest Korean-American Bank. The Taiwan-Based CTBC Bank. And Paris Baguette, whose name may fool the unacquainted, but a quick peek at the elaborately decorated interior will easily reveal its origins as a Korean chain, with Parisian-kitsch motifs.

The fact is, this cluster of stores, banks and restaurants broadly echoes the sort of retail mix one might expect to see along Canal Street in Manhattan’s Chinatown, only reconfigured completely differently. The open windows exposing the wares, electronics, or recently slaughtered meat; the vendors standing in the doorway; the panoply of multi-colored signs; the multifamily apartments stacked above the shops; the crowded sidewalks. In Manhattan, the economic activity spills out from beyond the sundry rooftops and awnings; not so in Edison. Here in suburbia, all that energy is safely ensconced in these low-slung boxes, where even much of the street level is windowless. And, of course, the only evidence that humans use this space (at least from the vistas above) is the ones leaving from or returning to their vehicles in the vast parking lot.

The emergence of Festival Plaza, the strip mall in the photos above, is hardly cause for alarm or celebration: it is simply a by-product the exodus of an ethnic group, long consigned to a densely packed urban district, in which certain members decided to pursue the same suburban living that native-born Americans previously sought en masse. Last year, I wrote about the very deliberate diaspora of Satmar Haredi Jews from Brooklyn to the wooded frontier of Kiryas Joel in the late 1970s. Meanwhile, the Chinese-Americans of the Lower East Side, no doubt disillusioned by Manhattan’s waning fortunes in the 1980s, apparently deduced that northern Somerset County, New Jersey offered the right blend of location, diversity and affordability, and word quickly caught on. Within the last thirty years, the demographic mix of Edison Township (the state’s fifth most populous municipality) has shifted considerably from overwhelmingly European descent to nearly 45% Asian—about the same proportion as the white population. By the 2020 census, Edison will probably be an Asian-majority municipality.

The result? An entire strip mall of Asian-themed tenants. If it were much larger and had another anchor, it might pass as a power center, akin to the one I blogged about a few weeks ago. That may be the next advancement of retail in Edison. In the meantime, this Festival Plaza serves as the next best facsimile of the shopping environment for which New Yorkers and tourists have long patronized Manhattan’s Chinatown. But, of course, the suburban counterpart boasts parking convenience, centralized property management, better security infrastructure, and, for those who choose—and clearly many prefer it—single-family detached housing nearby. Neither Festival Plaza nor Hmart, its anchor tenant, will ever offer quite the same shopping character as a real Chinatown, but for those who are more after the product than the process, it covers all the bases. A quick visit inside shows it has much the same diversity of produce and meats, completely protected from the elements. 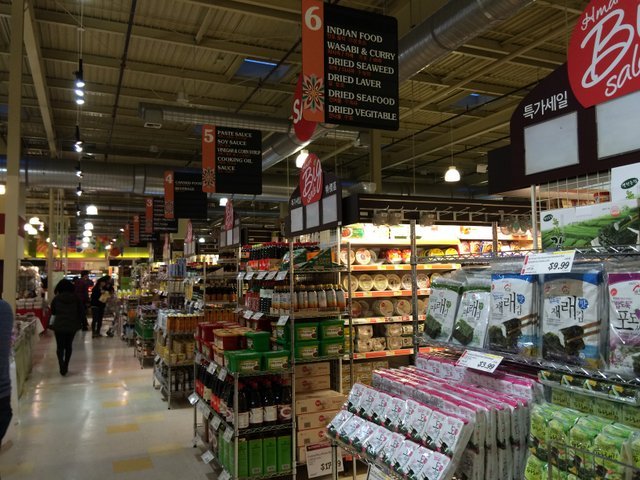 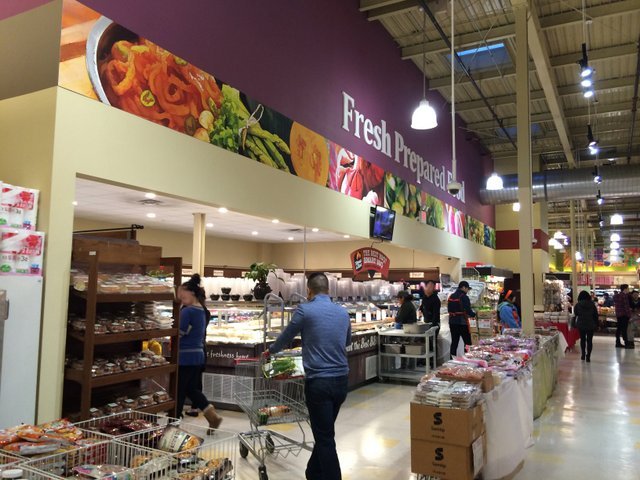 And, in a strange little hall partitioned from the rest of Hmart’s grocery, a row of storefronts offer a mini-bazaar of clothing and other durable goods. 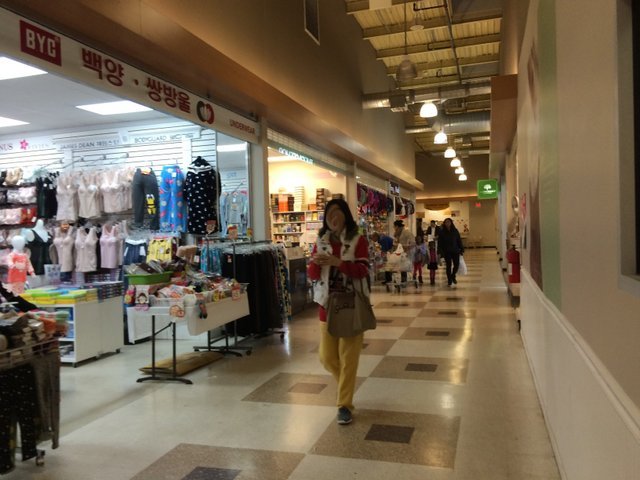 Up to this point, I feel I have approached the subject with a sort of doe-eyed wonder bordering on naïveté. Of course immigrants suburbanized; so did everyone else. And Asian shopping centers are hardly a novelty; in California they’re everywhere. Why wouldn’t they exist anywhere there’s a sizable contingent that would patronize them? Why shouldn’t the goods and services that certain immigrants seek migrate outward, just as the immigrants do? And why wouldn’t the architectural form of their shopping mimic that of the more automobile-oriented environment in which they now live? Were we really expecting pagodas everywhere? 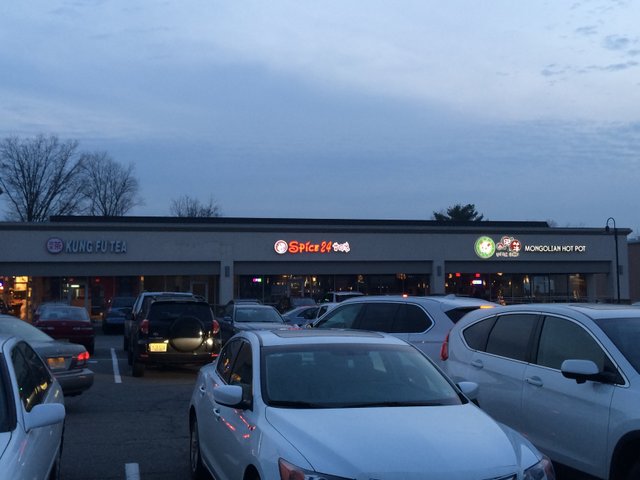 I guess the broader considerations have more to do with how these shifts occurred, rather than simply that they occurred, which is where things get murky and a little speculative on my part. Edison, New Jersey has a remarkably high median household income (over $85,000 according to 2010 American Community Survey estimates) considering its size, yet the housing in this part of the township still largely appears lower-middle class, and the arterial upon which Festival Plaza rests (State Route 27, or Lincoln Highway) has its fair share of blighted, or vacant storefronts. With such rapid demographic change—Edison went from 30% Asian in 2000 to 45% in 2010, with only a 2% growth in population—clearly some substantive home sales took place, which most likely involved the exodus of a considerable number of the original white middle residents who caused the suburb to swell in population in the 1960s and 70s, when many homes were new.

I don’t want to begin to pontificate on racial issues on a community I’ve barely visited, but suffice it to say, the rapid change did exert an impact on the commercial properties in Edison. And this cluster of Asian-themed stores, new though they appear, didn’t sprout from a greenfield. According to a news source (that somehow went defunct while I was writing this article), Hmart and Festival Plaza emerged as a revitalization of this shopping center after the former grocery store Tops Plaza (serving a primarily Western-European clientele) fell into disuse and neglect.

And therein lies the quandary: did the Asian immigrant community find Edison specifically because home values were already lower than neighboring suburbs, or did xenophobia among the original residents spur a “white flight” that spawned a brief period of high vacancy, blight, and cheaper real estate, to which the immigrant community promptly re-invested? Probably a bit of both. Either way, the cultural lag—where foreign-born citizens engage in the same resettlement patterns as the native citizenry, a generation later—elicits a little turbulence but provides the newcomers a convenient chance to apply a little spit-and-shine during the restabilization process. The result is an outpost that helps make the “exoticism” of Asian culture slightly more accessible to the non-Asian suburban community that surrounds it. A trip to any of the stores in Festival Plaza will, not surprisingly, mostly feature Chinese, Indians, Koreans or others Asian descent—but hardly exclusively so. Plenty of people who claim ancestry from Italy, Germany, Sweden, Dominican Republic, Nigeria or Staten Island. And physical accessibility stimulates further cultural accessibility: now that the expansive Jersey suburbanites don’t have to travel through bridges and tunnels to get many of the same restaurants, electronics or produce they’d find in Manhattan’s Chinatown, they might as well load the family into the Subaru, drive over to the parking lot at Festival Plaza, and walk right in. It’s suburbia after all—there’s plenty more room to explore, and it’s a lot easier to dodge the scary lobster tanks without jumping into a busy New York street.