Urban artistry comes in all forms.

Maybe it was the bohemian misfits converging in a once-floundering SoHo that prompted this approach. Perhaps it was the rediscovery of Classical values in 15th century Florence that spurred a continent toward unprecedented economic growth after centuries of stagnance. More likely it was neither. Quite simply, people operated on an hunch (mostly unconscious) that something artsy in their city might help bring it back to life. Regardless of the inspiration, settlements of all sizes have attempted to christen arts districts with the hope of stimulating economic activity where it has lagged. So the fact that Toledo should have its own corridor should come as no surprise. 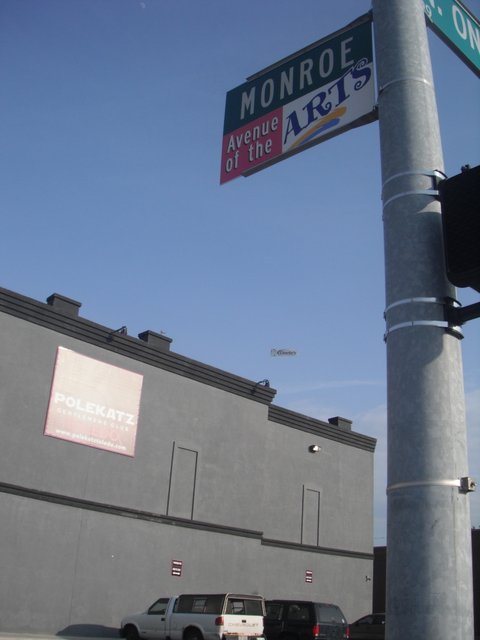 But I’m still scratching my head as to what prompted this subtitling of Monroe Street in Ohio’s fourth largest city. The best I can come up with is that the Toledo Museum of Art sits about a mile in the opposite direction from downtown. And the museum, while no doubt the most prominent collection in northwest Ohio, still comprises but a single block on this arterial, which stretches across the entire length of Toledo, until terminating in the suburb of Sylvania. But that’s not the real irony of subtitling Monroe Street the “Avenue of the Arts”. Just take a look at the background of the photo.

Can’t see what I’m talking about? Try another angle and it becomes clearer. 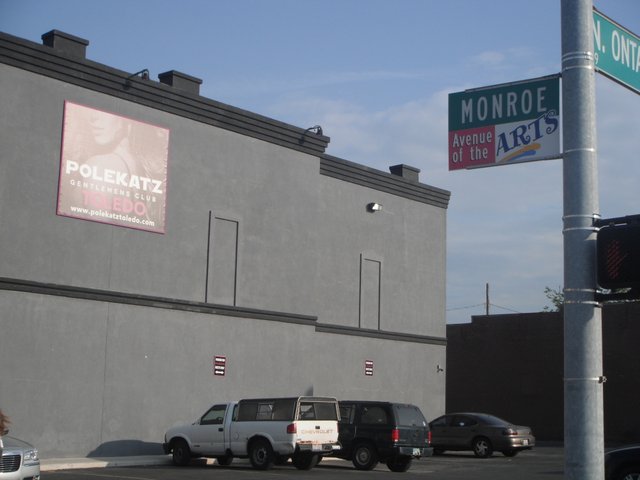 At this same intersection as this “Arts” designation is Polekatz. If you haven’t been able to figure out what kind of establishment Polekatz is, take a look at the building when standing more or less at the same point as the street sign. 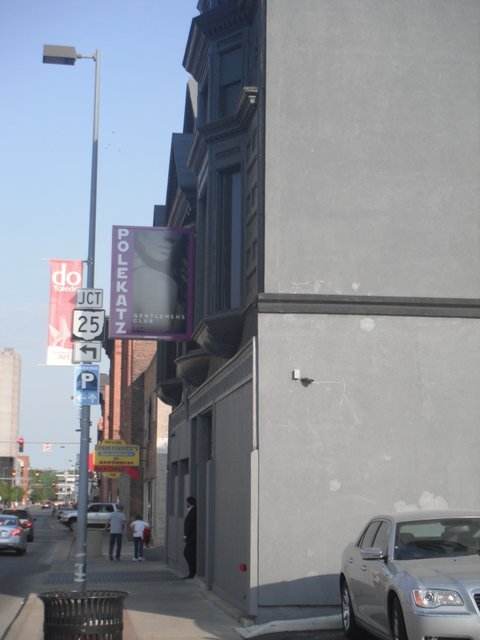 Yes, it’s a strip club—generally one of the top-ranked LULUs (Locally Unwanted Land Use). Many states have passed zoning enabling legislation that requires municipalities to provide for all uses, no matter how unsavory. As a result, strip clubs, adult video stores, and other legally operating sex-oriented businesses tend to go in areas where there’s little public outcry, far removed from residential districts: near heavy industrial quarters, off of rural interstate exit ramps, or on the uninvested fringes of downtown, which, in Toledo apparently means the Avenue of the Arts. Many cities’ zoning ordinances have specially crafted sub-sections that provide for LULUs in general, or adult-oriented businesses in particular.

It would be petty of me to write such a short blog article, characterizing Toledo by its strip clubs, and not mitigate my language with some more balanced context. To be fair, this strip club sits just two blocks from Fifth Third Field, the ballpark that hosts the Toledo Mud Hens and probably the most vibrant portion of the city’s downtown. More likely than not, the secondary arts-themed name for Monroe Street is part of a broader effort to galvanize activity nearby. After all, Fifth Third Field does seem to have successfully spawned a mild dining-and-drinking scene in the blocks immediately fronting it, which I featured in a blog article a few years ago. And city revitalization initiatives should strive to reinvigorate curiosity in long-neglected downtowns from a variety of vantage points: if Toledo already has sports covered, why not the arts? The red banner mounted to the streetlight in the above photo says “Do Toledo”—another campaign to bring people back to the center.

But I suspect it’s a testament to how isolated the revitalization is that, just two blocks away, the prevailing culture remains worlds removed from family-friendly Minor League Baseball. After all, the proximity of the “Do Toledo” sign to “Polekatz” may carry an even more pungent whiff of irony than the Avenue of the Arts label. 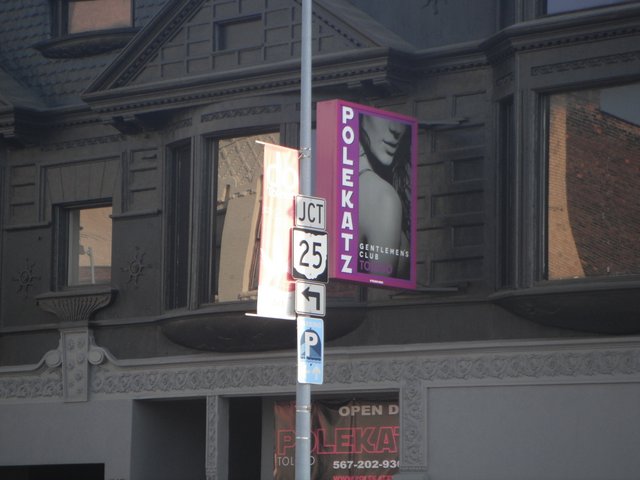 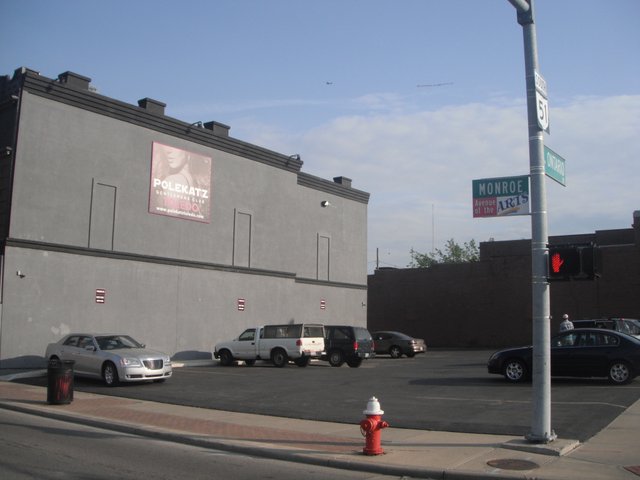 It’s probable that some Toledans meander down to Polekatz after the ballgame to unwind, so there remains a market for strip clubs, abetted by the fact that virtually nobody actually lives nearby. After all, even in more prosperous downtowns, it’s fairly common to encounter a few gentlemen’s clubs not far from a major sporting arena or stadium. But these photos are nearly three years old, and Polekatz is no more. So maybe it wasn’t quite getting the spin-off business its investors might have originally expected?

Then again, maybe the problem wasn’t so much a strip club as this strip club. According to local media, Polekatz had the advantage of being nationally franchised. After it closed, a locally owned strip club, Chez Joey, tried operating at the site, but the frequent police calls—including one for a homicide—only enhanced the seedy reputation of this block, to the point that the City Council recommended revocation of the liquor license. Ultimately the building’s Chicago-based owner evicted Chez Joey for defaulting on the lease, and it appears that, in the last year or so, the property has secured a more reputable tenant—one by the name of Scores: another nationally-franchised strip club. The article indicates that Scores seems to be avoiding the violent reputation that Chez Joey suffered, though it’s not without its own hang-ups.

In the ensuing years since my Polekatz photos, the level of economic activity at The Avenue of the Arts and Ontario Street has apparently remained about the same. Certainly not enough to attract a more savory tenant than a strip club—or, for that matter, for the surrounding land uses to pressure it out. It probably has something to do with the way successive owners have reconfigured the building itself, evidenced by this storefront photo back when it was still Polekatz: 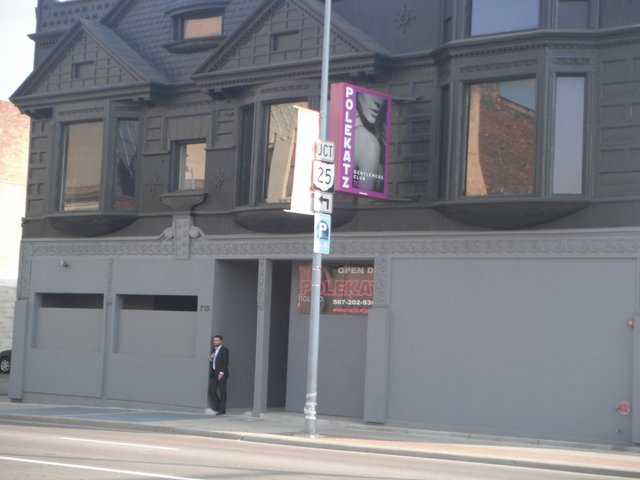 With that much opacity at the street level, it’s obvious that the building is tailor-made to conceal activities that are either illicit or at least widely publicly scorned (not unlike the Heat Nightclub in Wilkes-Barre that I blogged about more recently). Compare the ex-Polekatz façade to its neighbors further down the street, which appear a bit more “extroverted”. 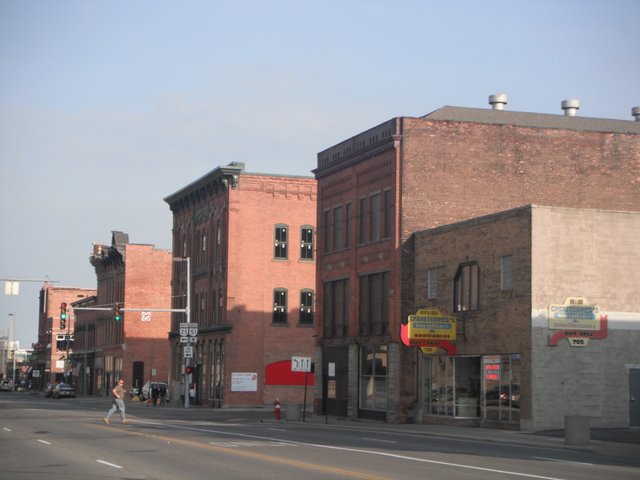 No change likely for Polekatz/Chez Joey/Scores in the foreseeable future. Just as boys will be boys, strip clubs will be strip clubs. Toledo awaits its more comprehensive downtown Renaissance: one that will bring people downtown for more than a game or a lap dance—one that will re-animate those old buildings and tear away those false, tinted frontages. Maybe eventually even the artists will set up shop.

4 thoughts on “Urban artistry comes in all forms.”