A threadbare patch on the new urban tapestry.

The evidence is everywhere around us: people are rediscovering long-neglected urban neighborhoods. But why? What is prompting this sea change in how we relate to cities? One could argue that recent social policies have focused on downtown revitalization, as well as the surrounding neighborhoods, and the ensuing investment is finally manifest. But anyone who has read more than a few articles of this blog knows how loathe I am to attribute any widespread cultural change to policy. And, truth be told, both municipal and federal leadership were devising urban allurements over half a century ago—generally only a few years after any realization that historic central business districts were declining. From limited access highway construction to urban renewal, from pedestrian-only main streets to downtown sports stadia—all of these aimed to orient a suburban population toward the downtowns, as well as the surrounding inner city neighborhoods, many of which faltered even more dramatically. Only in the last fifteen or twenty years, though, have we seen any real traction in revitalization—genuine evidence of a prevailing trend toward moving back to the cities, rather than just a one-off.

So when and how did we turn the corner? At some point, the private sector joined in. Finally. To be candid, the private sector got involved quite a while ago in many respects—maybe not so much in the era of urban renewal (when public investment replaced blighted commercial/residential areas with mostly publicly owned and operated civic space), but certainly as cities built pedestrian boulevards, festival marketplaces, and, by the mid-1980s, facsimiles of the enclosed malls that had succeeded so consistently throughout suburbia. In each of those examples, government partnered with the private sector, reconfiguring both buildings and the space around them so that various enterprises would once again find reason to return. And while businesses often did return to occupy these new focal points, relatively few of them showed much staying power. After all, most cities’ downtown malls built from 1985 to 1995 are dying or dead. And the urban turnaround isn’t universal: to this day, municipal governments continue to subsidize their central districts and oldest neighborhoods, often in the form of tax abatements (to stimulate location-specific job creation) or Tax Increment Financing (TIF) districts (to help finance risky investments in long-dormant older neighborhoods). But, unlike the 1980s, 90s, and much of the 2000s, a considerable amount of the private sector’s participation comes without the government dangling cookies before the business community. Developers are simply building market rate multifamily buildings to meet middle (and upper-middle) housing demand.

And there’s the kicker. This time around, the urban comeback feels real, primarily because so much more of it is happening (to put it somewhat crudely) through Adam Smith’s invisible hand. Perhaps this attitude is an indication of how oriented American culture is toward capitalist principles, since prevailing wisdom suggests that heavy placed-based public sector investments often correspond to districts that the private sector has spurned. In other words, if public dollars are heavily involved in an urban district, it’s probably a sign that the area is otherwise uncompetitive. Or perhaps I’m projecting. At any rate, while the range of private sector investment varies greatly from one metro to another, most metros over one million people are manifesting the results of a downtown renaissance—visible even to people who aren’t necessarily attuned to such phenomena.

But will it last? For those cities that could never claim significant downtown populations prior to the twenty-first century—which is many—the long-term prospects of all this downtown housing remains murky. Is this just another fad? While those big posterboard signs for architecture/engineering firms, those clichéd, doctored photos of beautiful young professionals living it up, those long-vacant storefronts finally getting some tenants…all of them suggest that this round of reinvestment is sturdier, maybe even ironclad, it is possible to spot some cracks in the surface. Here’s an example in Albany, New York: 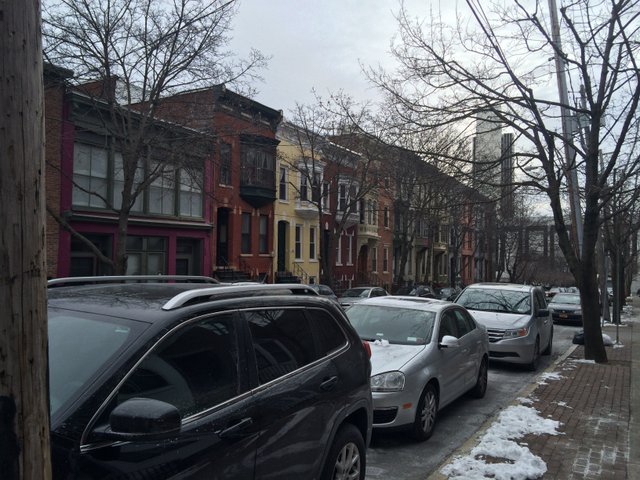 The Center Square neighborhood rests just to the west of the city’s massive Empire State Plaza, the epicenter of most government jobs that serve the nation’s fourth most populous state. In fact, the quintet of highrises is visible not far in the distance, evidenced by this pic. 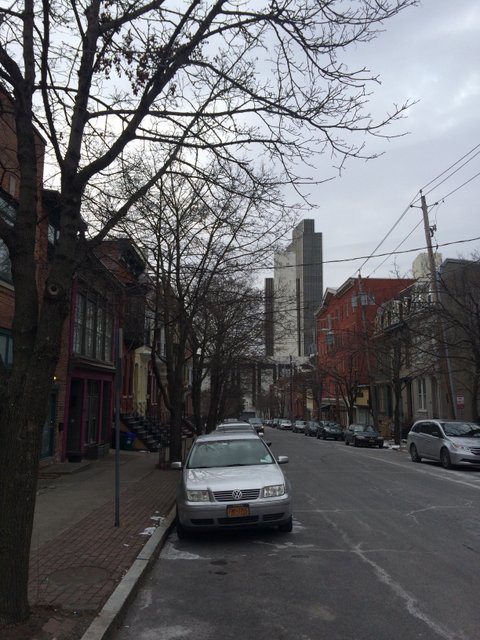 See the skyscraper? That’s the core of New York state government. And, right next door, Center Square is arguably Albany’s most fashionable urban neighborhood, with tightly packed 19th century rowhomes, upgraded cosmetically through an expensive color palette that varies from one home to the next. 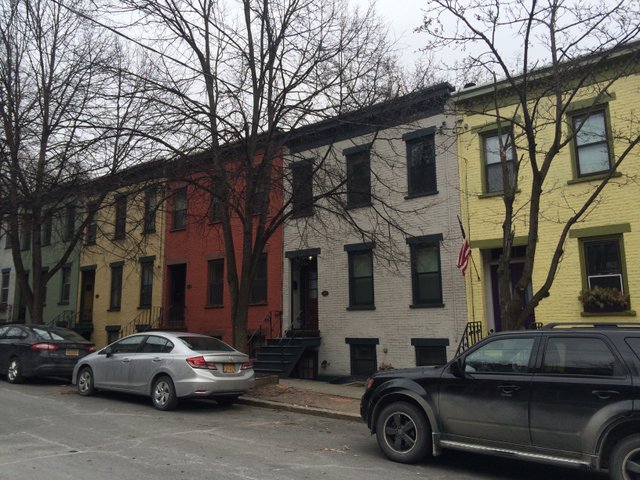 Others retain the original color of their brick but are no less visually arresting for their impeccable condition. 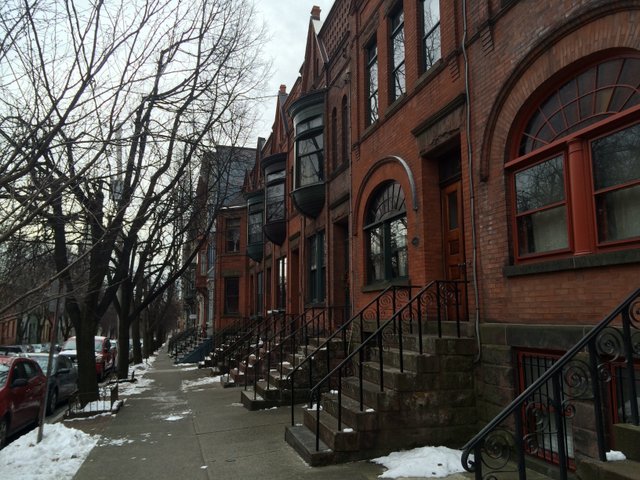 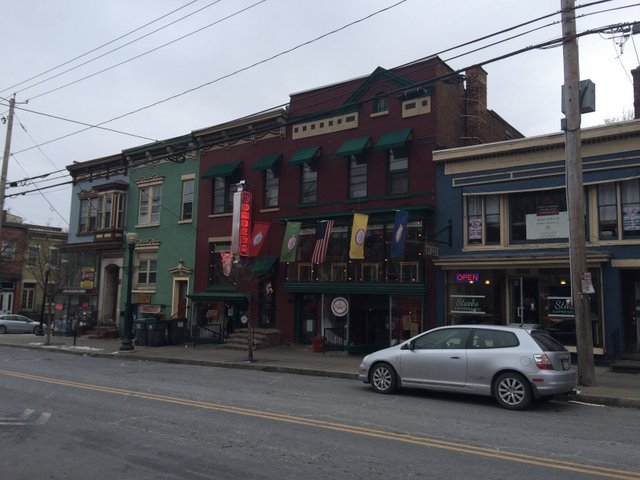 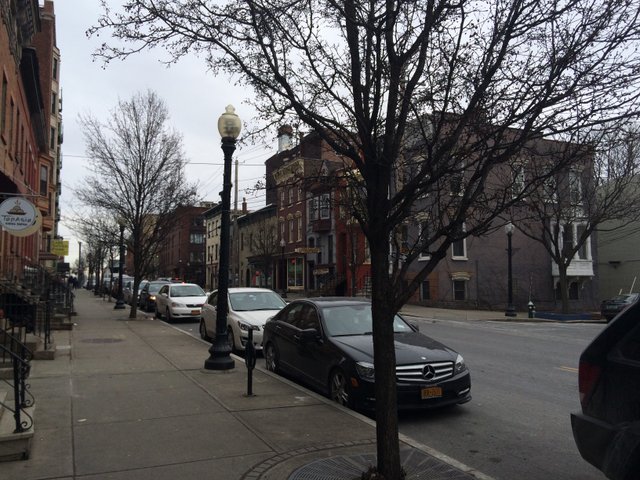 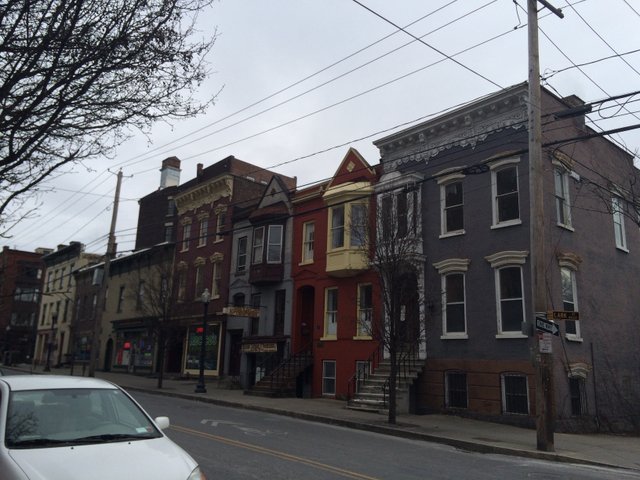 The intimate scale of this two-lane street no doubt amplifies the neighborhood’s appeal, earning it comparisons to Greenwich Village in New York City.

And, since the Empire State Plaza is literally only two long blocks away from Lark Street, residents in this cozy little neighborhood can easily stroll from their brownstones to their jobs for the State of New York, where the vista is a world removed. 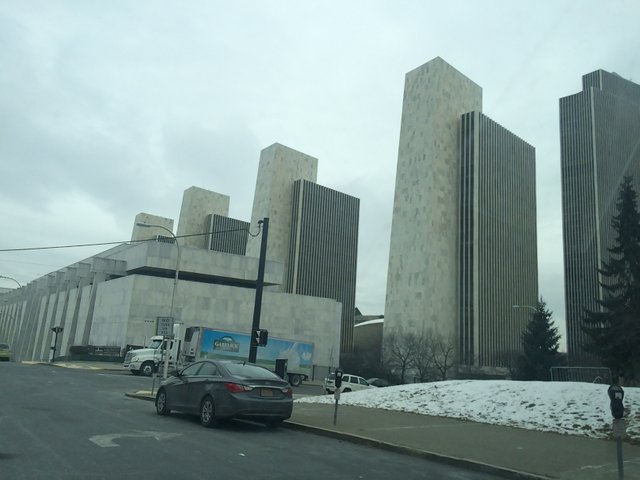 It would be ironic if it weren’t so commonplace, but this hip neighborhood sits cheek-by-jowl from one of the biggest urban renewal development initiatives in the nation—certainly disproportionately large given the relatively modest size of this city of 100,000 (and 135,000 at its mid-century peak). Anyone familiar with urban renewal would draw the conclusion that the vast civic square devoid of housing that comprises the Empire State Plaza once hosted hundreds of lower-income homes…probably not all that different from what survives in Central Square. Those homes faced demolition half a century ago. The photo below only captures a portion of the plaza, but one can imagine how many people could have lived on the site of this huge government context, if that demolished housing looked anything like those photos near Lark Street. 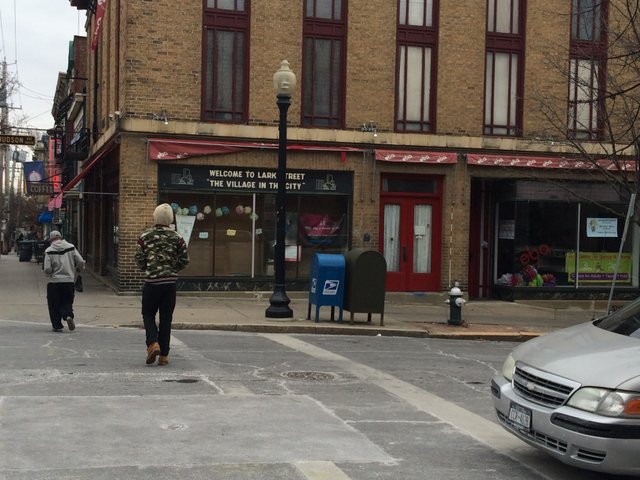 Empire State Plaza, as a downtown revitalization effort, involved relatively little private sector collaboration, since it took place in the 1960s and early 1970s, when corporate confidence in city centers was at an all-time nadir. Center Square may at one time have been much larger, but what survives now simply escaped implosion forty years ago. And it’s a great urban neighborhood, with most of the housing stock fully renovated, while various street corners still host corner retail and services. 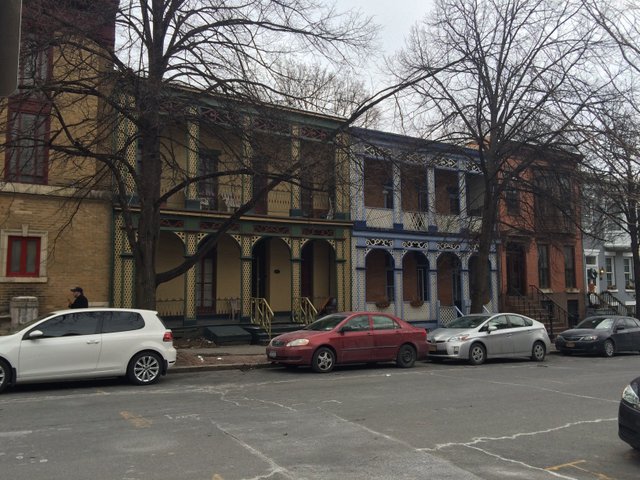 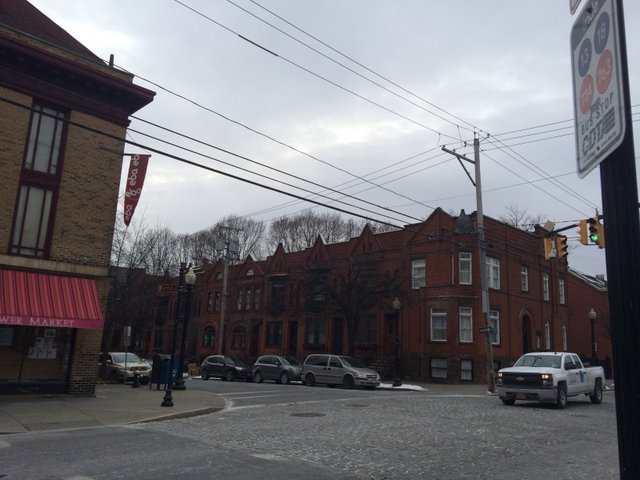 But—getting to that crack in the surface of urban revitalization—a few spots still seem resistant to recovery. Like this little building. 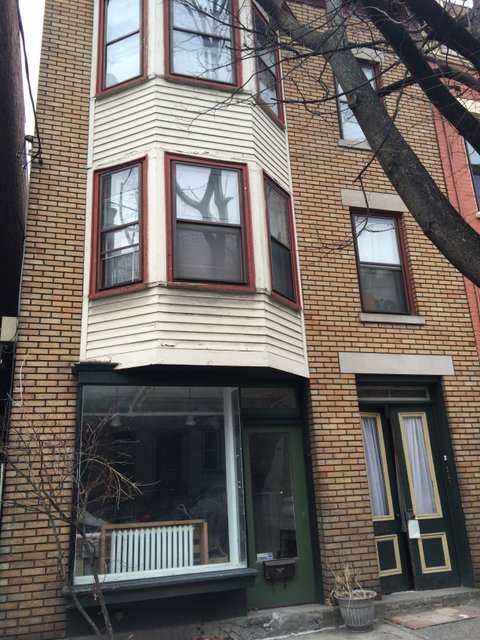 It may night seem like much, but it’s a mid-block structure with first-floor fenestration that, at one point in time clearly intended to serve as a storefront. Needless to say, it’s vacant now. 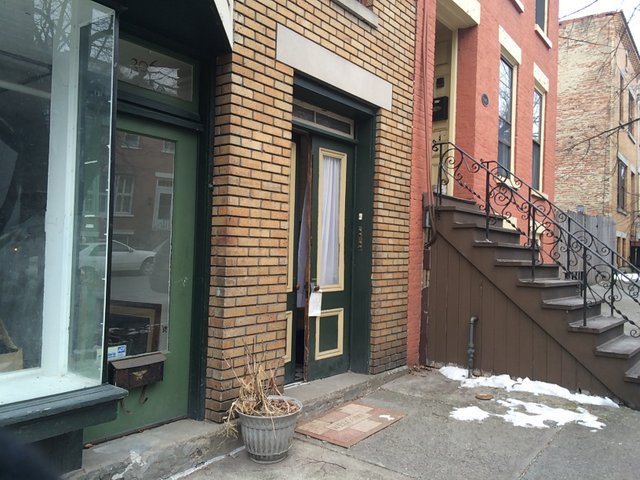 The residential space above it seems to be doing just fine, but the lower floor just can’t secure a tenant. 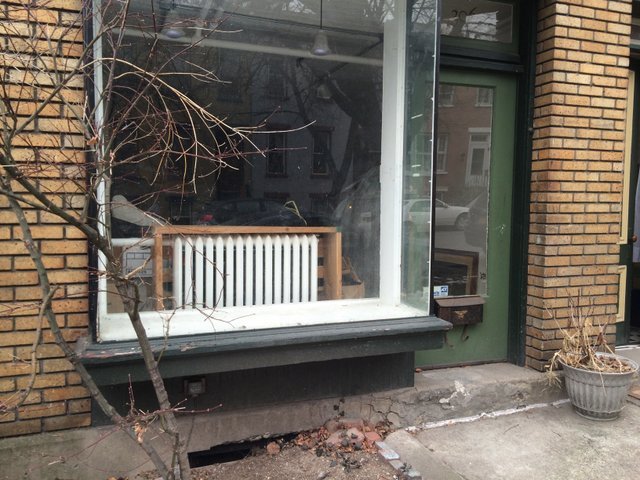 What’s the problem? Well, it’s in the middle of a block, and, as successful as cornershops might be, it’s hard to attract commercial tenants to a space in an otherwise quiet residential block, no doubt exacerbated by the fact that it’s a one-way street, diminishing by 50% the angles by which vehicular traffic might approach the storefront. And that ugly radiator hogs the display space, further undermining the curb appeal. But would there ever be a taker? My suspicion is that, as great of a neighborhood as Center Square appears to be at this point, it’s still got a fraction of the population it claimed in 1960, and even less than in 1920. Household sizes are smaller, so even the most well-preserved 19th century neighborhoods still host far fewer people per unit than they once did. And while the neighborhood enjoys high demand and solid incomes, it still may not be enough to attract a tenant in an online era when more and more businesses can thrive without a tangible bricks-and-mortar presence. Frankly, it surprises me that the owner of the building hasn’t relented and converted the storefront to a first-floor apartment.

While it may seem unfair to draw any conclusions about Center Square from a single example, this pattern seems to repeat itself in other cities, particularly on the East Coast—one of the few parts of the country where mid-block retail was once common on an otherwise residential street. And, just a block away, we spot another example in Albany. 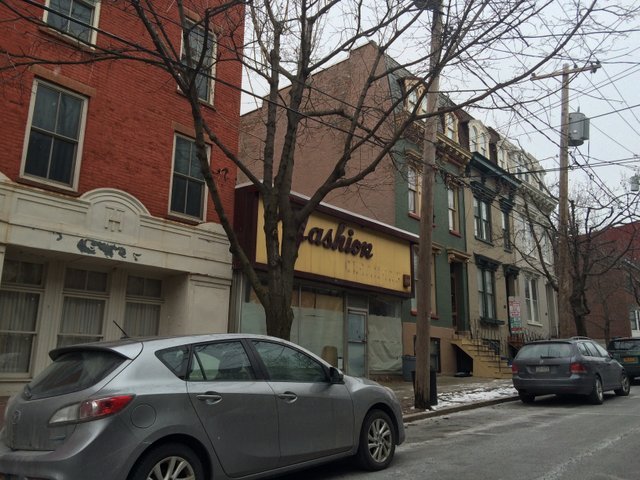 Again, middle of the block and completely empty. This time, the signage and the architecture suggest a slightly different history. 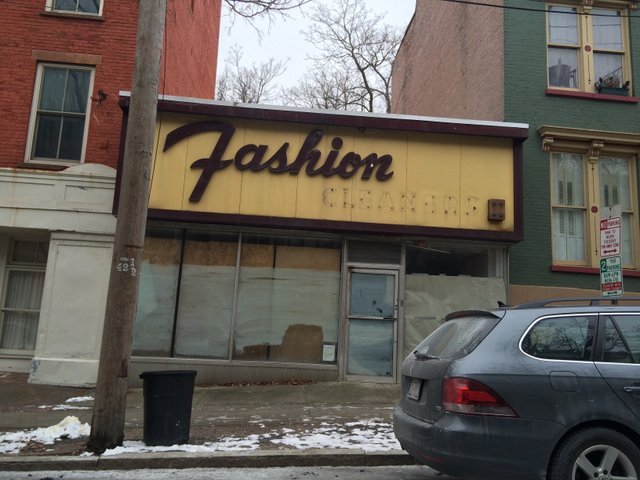 Clearly, even if Fashion Cleaners closed just recently, the age of the sign suggests that it first began operation over a half-century ago. But more significant is the fact that it’s a one-story building in a block of three-story homes. Notice the adjacent wall. 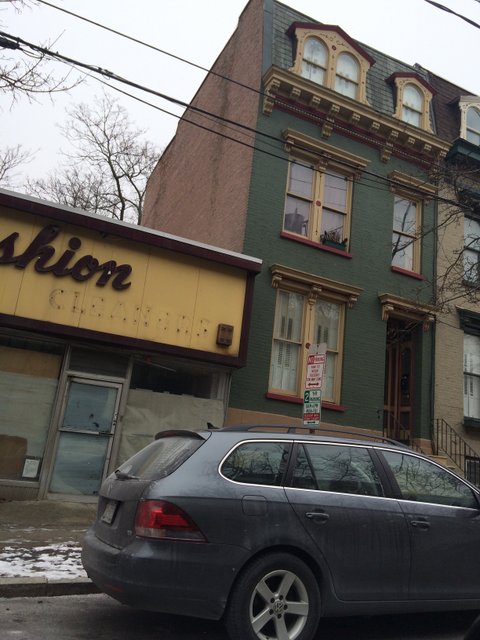 No windows on the side of that home to the right. Chances are, Fashion Cleaners is an old infill that replaced a demolished three-story structure many decades ago. Maybe its predecessor was a commercial/residential combo. Regardless, the fact that a one-story building replaced what most likely was a much taller one suggests that, whenever the storefront hosting Fashion Cleaners broke ground, demand for real estate in the area had already diminished. Otherwise, why not build another three-story structure? As for the current condition, I don’t see a tenant taking up space at Fashion Cleaners any time soon, unless it’s another dry cleaning operation. After all, dry cleaners—particularly the older ones—left behind such a gumbo of toxic chemicals that most vacated operations get classified as minor brownfields. And besides, why would a contemporary dry cleaner take this space when they can find a higher profile operation on a corner, or along Lark Street?

Clearly it’s not fair to brand the current wave of urban repopulation as transitory simply because it hasn’t yet triggered growth in mid-block commercial absorption, which, as mentioned before, is already a rarity in most American cities. But it does indicate that, as much as the urban advocates would like to argue otherwise, we aren’t simply re-urbanizing; the motivations this time around are entirely different. Priorities for home, family and work milieus have irrevocably changed. Maybe they’ll continue to morph in a manner that someday snags a tenant for the old Fashion Cleaners. Or maybe someone will demolish that little eyesore and build a 10-story skinny residential tower. All we know is that the projection of the existing trends into a rigidly linear future will inevitably fail us, just as it did the architects of urban renewal who thought they were ushering in an era of modernism. Albany’s best example of these failed space-age aspirations—the Empire State Plaza—now seems almost quaint.

7 thoughts on “A threadbare patch on the new urban tapestry.”