The façadectomy fan club hasn’t earned a lot of love over the years. Historic preservationists deride it because it cynically assumes that the only true value to a historic structure is the often three-foot-thick façade, while the remaining 99% of the building (not to mention everything that took place within it) is left to the dustbins. Linguists impugn the word because it incorrectly semantically appropriates the Latin suffix “-echtomia”, which of course means “excision” or “removal”—and in this developmental practice, the façade is the only thing that doesn’t get removed. So maybe this strange term, which doesn’t yet appear in a conventional dictionary, alludes to a technique that is inherently dubious.

But then, we might first ask: what is a façadectomy anyway? The standard practice simply involves preserving an older building’s façade—often with elaborate braces and scaffolding to keep it from collapsing—while erecting an entirely new structure behind it…one that is typically better aligned with what the current market prefers in buildings. In other words, the practice intricately dismantles everything about an old building except the “pretty” part, so that an essentially brand-new edifice enjoys the patina and historic aesthetics, but with completely modern amenities inside. Façadectomies happen all over the world, and, in the US at least, they may be one of the most potent harbingers of the widespread back-to-downtown movement, particularly in converting obsolete old office buildings into high-rise housing with historic cachet.

I don’t think we’re even close to reaching peak façadectomy. I’ve blogged about it before, noting some canny examples (like this one in Memphis) where it’s just a façade, propped up and awaiting a developer to build behind it. In a particularly bizarre example in Washington DC, the developers encased old façades in what almost looks like plaster of Paris, rendering them useless but at least maintaining the visual effect of an old commercial street wall. To be fair, in many of these cases, the building may have been derelict, abandoned and in complete danger of collapse; the façade was the only salvageable part. But, regardless of the history involved in each attempt, the practice only reinforces the notion that façades are all that matters among the aging buildings in an urban landscape.

That said, a façadectomy may still be better than losing the building altogether, which often is the only other option.   And the most public side of an edifice usually does boast the lion’s share of important architectural details and craftsmanship. My recent trip to Hartford exposed me to one of the most in-your-face examples of the practice I’ve seen; it may not be the most elegant example, but the net benefit conferred upon the Connecticut capital’s long languishing downtown is probably greater than a dozen smaller efforts. 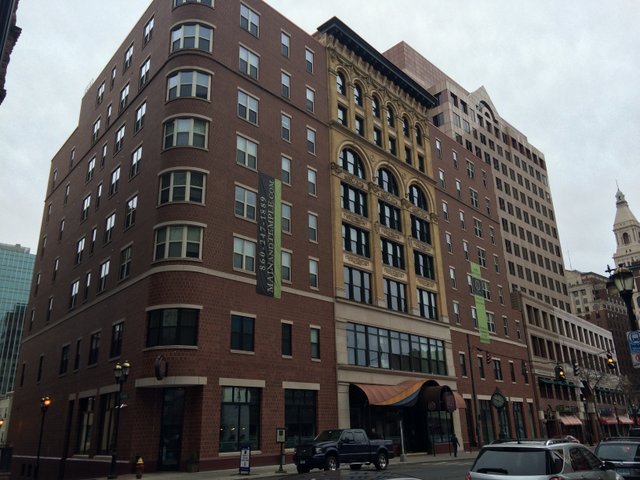 It’s called the Lofts at Main and Temple, and apparently it’s fairly old, completed in 2007. And it might not strike the untrained eye, but it’s a paragon for teaching how the practice works.

If it isn’t already obvious, this particular development largely consists of three component parts: an ornamented central façade flanked by two additions. The photo below should confirm. 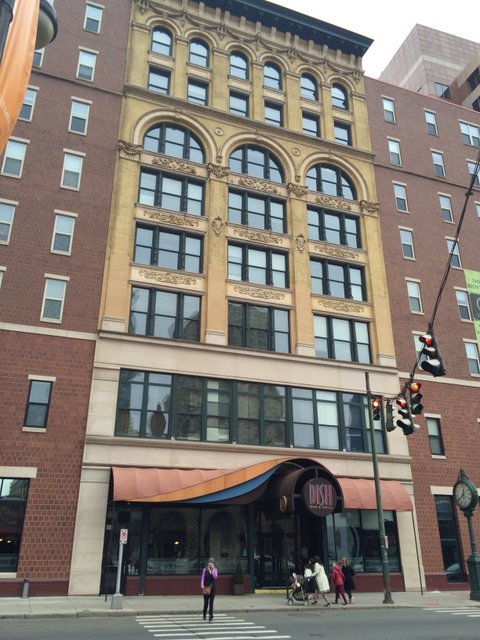 The central portion was the flagship for the old Sage-Allen department store, constructed in 1898 and serving southern New England until it closed in 1994. The building sat vacant for over a decade until Marc S. Levine embarked on a $50-million-plus redevelopment, salvaging the 120-year-old Romanesque/Classical Revival façade and expanding the building on either side so that it could accommodate more units, an extensive underground parking garage, first-floor retail, and no doubt several other amenities.

According to a report by Linda Reeder at the American Institute of Architects website, the transformation of Sage-Allen into the Lofts at Main and Temple also helped reintroduce downtown workers to a key component of their city: Temple Street itself. The block-long street is barely visible on the photo below with a tiny street sign, just beyond the rounded corner of the building in question. 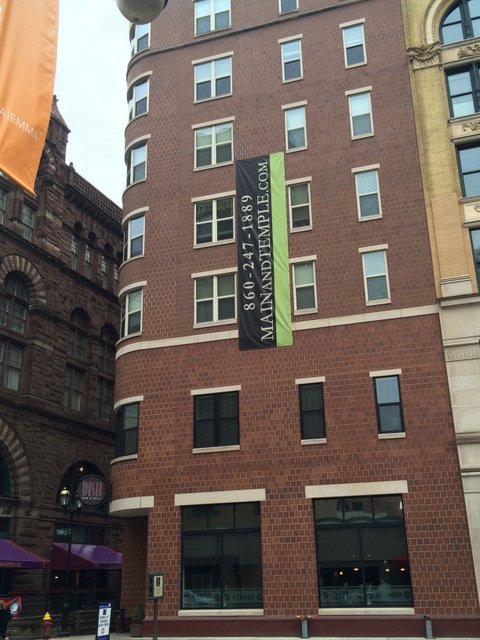 And, until this redevelopment, Temple Street had essentially ceased to function; the right-of-way instead hosted a sort of skyway-like “Mixmaster” structure to ease shoppers shuffling from one department store building to another, thereby completely obstructing Temple Street. This redevelopment project essentially daylighted Temple Street, opening it back up to vehicles, pedestrians, and storefronts, manifested by the Google Street View right at the corner as well as this one a little further down the tiny street. According to Design Cost Data, this outdated Mixmaster passageway actually obscured much of the Sage-Allen façade, diminishing the building’s prominence among downtown visitors and compounding its neglect. The Trix Rosen Photography website offers a handful of early 2000s photos that demonstrate the Mixmaster’s visual and physical impediment.

But now, the Lofts at Main and Temple offer a much more gregarious architectural language. I suspect some will cavil about the unity of the result; after all, the two bookends are notably plain compared to the rococo finish of the Sage-Allen façade. But such criticism isn’t entirely fair: notice that the massing and fenestration align well with the old façade. 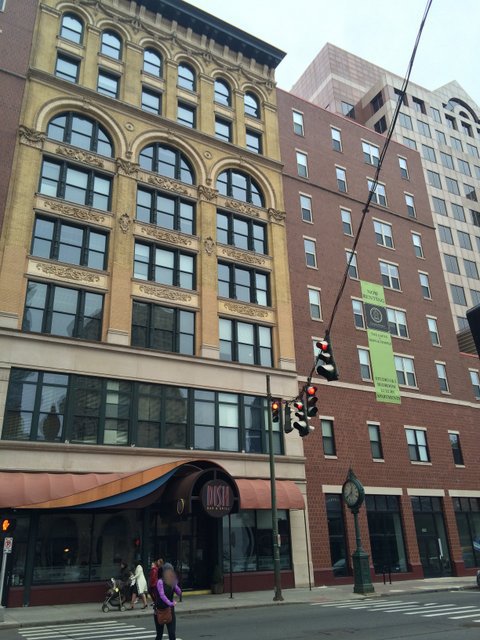 The entire product achieves relatively close symmetry. And perhaps it was wise to leave those bookends unadorned; after all, this way they never upstage Sage-Allen, and they don’t demonstrate a cloyingly conscious effort toward architectural unity—an effort that would almost certainly fail, since the central façade will always look older than its two neighbors. Rather than try to achieve a consonant chord and run the risk of one string falling out of tune, the developer and architect focused on a melody with its accompaniment. 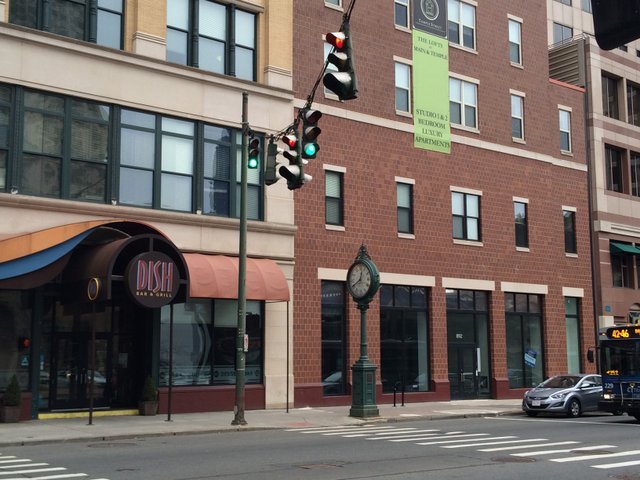 It creates a hierarchy—I have no doubt those magnificent arched windows in the Sage-Allen section could command a hefty price tag—but it avoids both monotony and the contrivance often associated with façadectomies. One could rue that at least one or two older buildings faced demolition to make way for the bookends, but in the process the developer saved a sentimental Hartford institution.

I hope that the Lofts at Main and Temple have helped to usher in a renaissance for Hartford’s downtown. I’m a bit concerned that those prominent banners are still hanging, promoting units for what is no longer a new development. I’m also pessimistic about the retail vacancy visible in the above photo, right near the restored old Sage-Allen clock. But, according to a recent Hartford Courant article, downtown apartments are hot…just as they are in a number of smaller Northeastern cities. Let’s hope the high demand stimulates more redevelopment. It might even yield another false façade. After all, the Lofts at Main and Temple are in good company, since one can find a far more eccentric effort less than a block away: 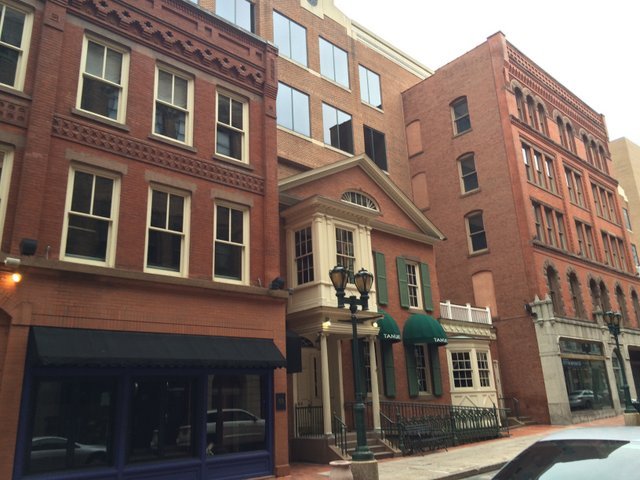 13 thoughts on “Helping downtowns meet demand and save face.”